This past Monday night, Yvo and I were invited to preview the special Chinese New Year’s menu at a new Singaporean restaurant, Masak. Manhattan is definitely lacking in Singaporean restaurants as I learned over the summer at the Singapore Takeout event. I was looking forward to another taste of this “hybrid” cuisine.

After arriving, the first thing you see is the very small bar area up front and the tiny open kitchen. It is pretty amazing how chefs manage to work in the notoriously small kitchens that are all too common in the East Village. 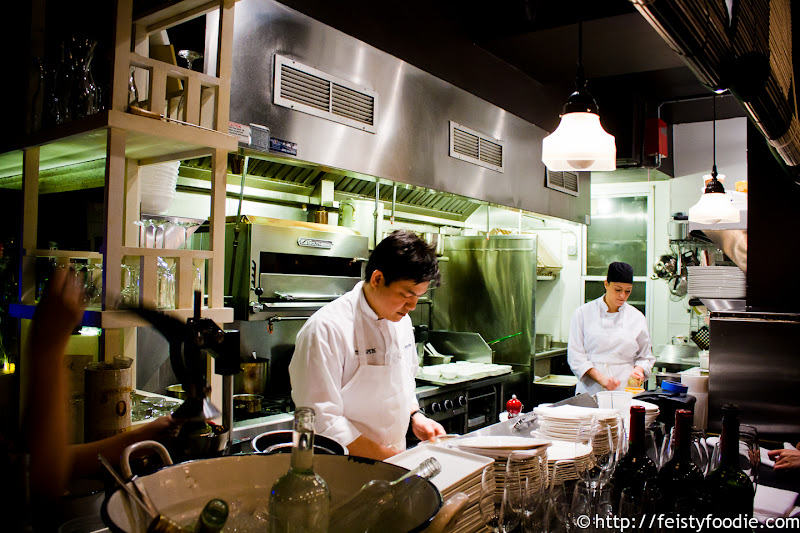 We started off with a special cocktail crafted for the night called a “Year of the Dragon.” It had Batavia-Arrack, Calamansi, Lime and Salt. The friendly bartender informed us that Batavia-Arrack was basically Singaporean rum. It was created when the Dutch controlled Singapore. It was super tart from the calamansi, but quite refreshing. Unfortunately, the rim of the glass was salted a bit too much for me. My fault for not asking for no salt.

I quickly moved on to Tiger Beer. They also had a white and red wine on offer. 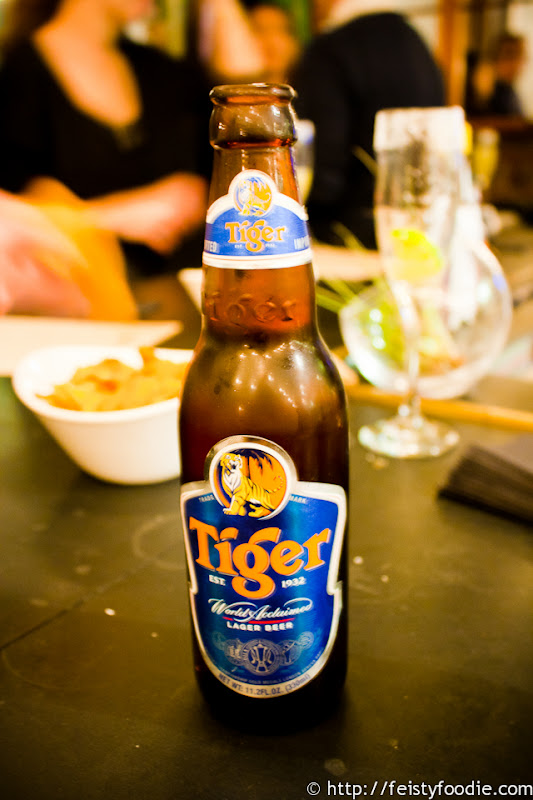 To whet our appetites, they put out bowls of arrowroot chips with sea salt. These were quite delicious and addictive. Super crunchy, yet not greasy from frying. I think Terra Chips have arrowroot in them? Yvo informed me they were gluten-free, if that’s your thing. 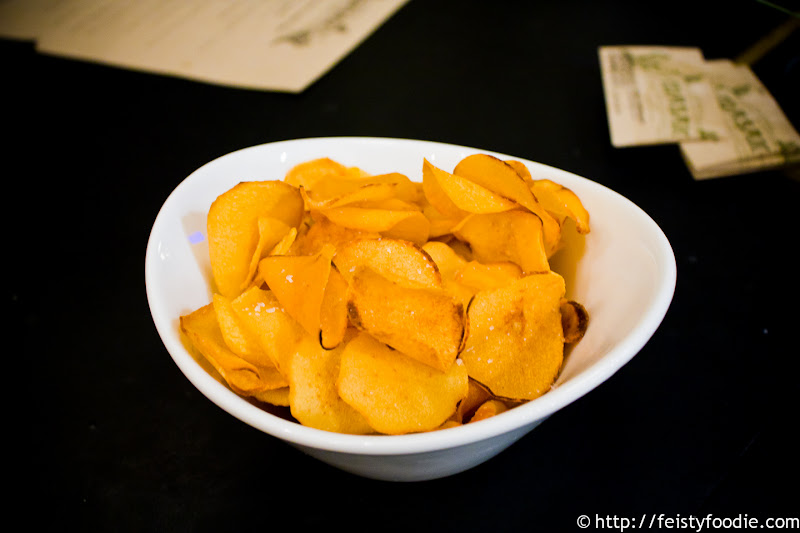 After we sat down to dinner, Chef/Owner Larry Reutens came over to talk to us for a minute. He informed us that Masak is a Singapore-influenced restaurant, so not all of the dishes were 100% authentic. As for the special Chinese New Year menu, he also took some liberties and mixed up some traditional dishes, family recipes and his own. It is always a good sign, when the Chef truly makes the menu his own. I guess it can’t hurt when you are the owner also?

Since the restaurant and kitchen was so small, everything was served family style. (Thanks to Yvo for taking all of the pictures, even if some were slightly askew. ;))

Yvo says: Yeah… I have no sense of horizon, my pictures are often crooked. 😛

Yue Sang Salad- artic char, carrot, radish, pomelo, peanuts, sesame seeds, blood orange, papaya. I was not expecting a raw fish salad (since I don’t read Chinese), but was pleasantly surprised by this. Yvo told me this was a super traditional dish shared with your family, except hers haha. Fresh fish and citrus, what’s not to like? The veggies were lightly dressed and worked well with the crunchy peanuts. I liked this a lot.

Yvo says: I’ve read in the past about Chinese families that celebrate the Lunar New Year with ‘yue sang’ (literally, fish raw). The plate is meant to be served as a huge platter with layers upon layers of the ingredients, and then everyone sticks their (clean) chopsticks in and helps toss it around to create some sort of beautiful tossed together dish. I first read about this on an Australian-Chinese girl’s food blog years and years ago (when I first started reading food blogs, a lot of them were written by Australian-Chinese girls for some reason).  I was like WAHHH I want to do that! and my mother told me that it’s specific to certain regions of China/Asia (I imagine the coastal ones), and even if we were from that area, since she doesn’t like or eat raw fish, we wouldn’t have been brought up eating that. Boo on you, FeistyMom!  In any case, I really enjoyed my share of this dish – light, refreshing, and a nice start. 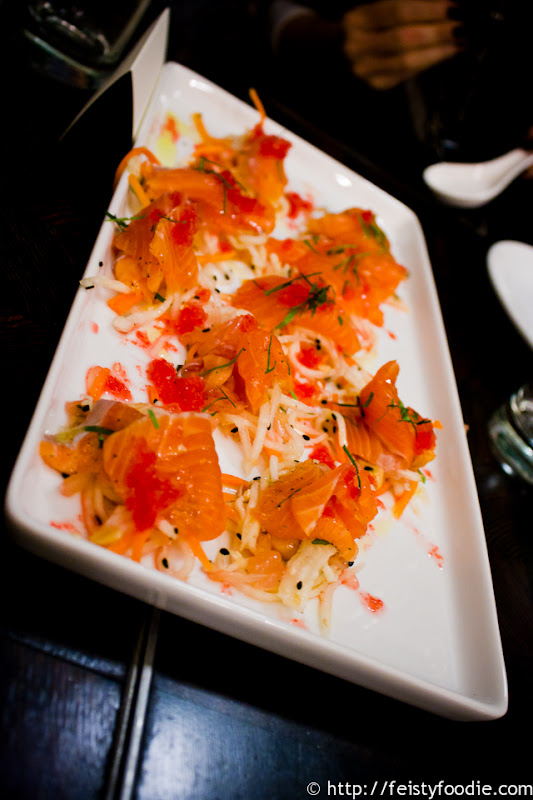 Bamboo Mushroom & Crab Soup. Yvo had way more crab in her bowl than mine, but one of our table mates didn’t get any soup. Apparently they didn’t prepare the right amount, strange considering they knew the exact number of attendees. Apart from the sweet crab, the soup itself was pretty flavorless. Yvo and I both picked out some shell bits too, which wasn’t very appetizing.

Yvo says: I found the soup to be sufficiently tasty, but fairly bland, like someone pressed the mute button. Looking at the photo now, I wouldn’t have found it odd to have some red vinegar added, but I suppose in Asian cultures, since everything you do during the 15-day New Year is meant to have some symbolism and indicate what you’ll do for the rest of the year, vinegar – with its sour taste – would be forbidden. 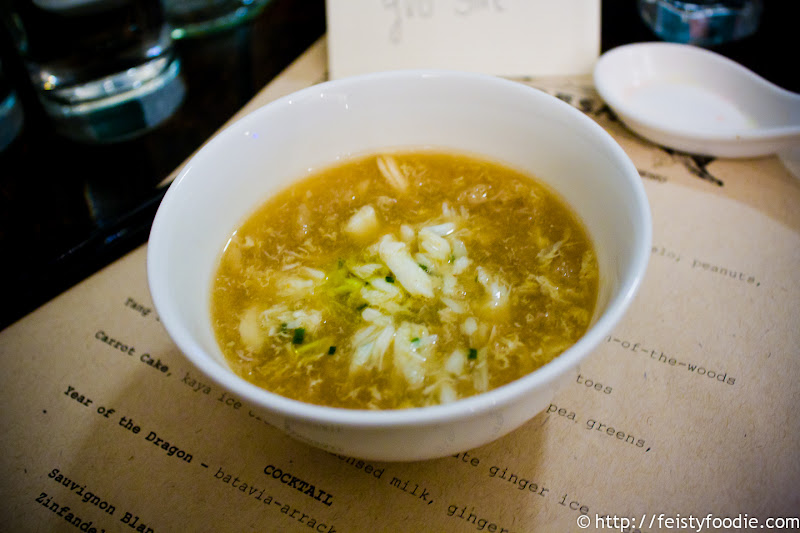 Nantucket Bay Scallops with Chinese leeks, roasted hen-of-the-woods mushrooms and garlic chive. This was one of the prettiest dishes of the evening, but the flavors weren’t really up my alley. The scallops were quite sweet, while the garlic chive sauce was quite powerful. The mushrooms were good, but nowhere near as good as the ones I had at Maialino a while back. Everyone else seemed to really enjoy this dish.

Yvo says: I’m only recently discovering how much I enjoy scallops – when they’re cooked properly.  No complaints here on the cooking – the scallops were tender, with the centers just barely cooked. Not chewy at all!  I’m extremely familiar with garlic chives, as they are a staple of Chinese cuisine, and love their garlic taste, though I think TT was not expecting such a pungent punch!  I didn’t find them overwhelming but instead I thought they complemented the sweet scallops nicely.  And the mushrooms were meaty, wonderful swiped through the puree.  Mmm. 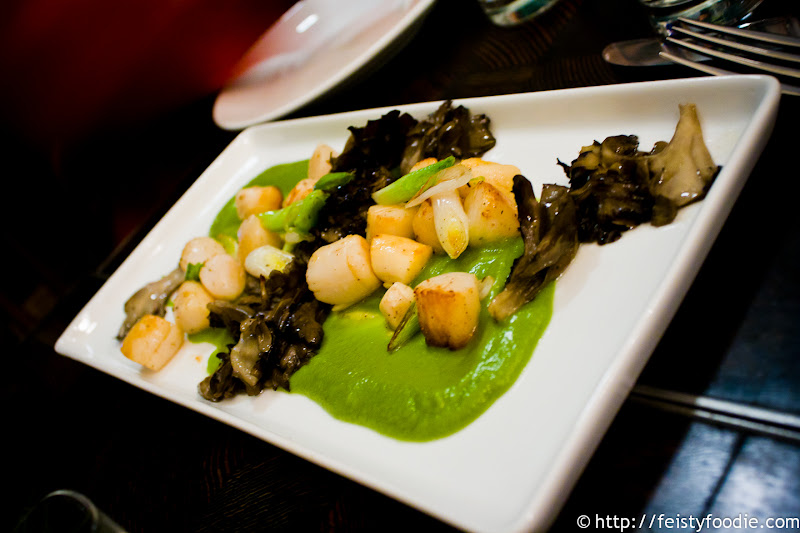 Roasted Quail with salted duck yolk, lotus seed, pea greens, glutinous rice, five spice jus. The quail was actually stuffed with the yolk and rice, which was quite nice. It was a nice dish, but the flavors were pretty muddled. Nothing really stood out for me. With Asian cooking, I look for strong flavors, but that was not the case with this dish.

Yvo says: All I can say here is that I really wanted more sticky rice.  Quails are too small to be properly stuffed with a good amount of sticky rice.  Where is my sticky rice? 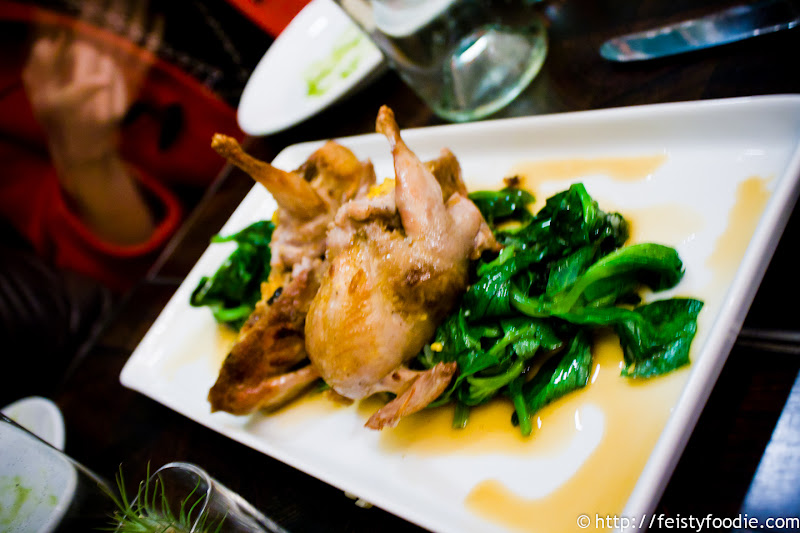 Grandma’s Chicken Curry with fingerling potatoes. This curry looked a lot better than it tasted. The flavors were on the bland side. While coconut curries tend not to be as spicy as others, they usually still have a big wallop of flavor. It tasted as if the curry was quickly made, not allowed to simmer for hours on end for all of the flavors to develop. However, the chicken and potatoes were cooked perfectly.

Yvo says: I am no expert on curry, particularly not those made with coconut milk (I’m allergic). Actually, I make a mean Japanese curry, but that’s completely different.  Anyway, I was really hungry still – eating lots of small portions confuses my stomach and makes me want to eat more and more and more until I scream from pain – so I actually ate some of this.  And then ate some more.  Yes, I knowingly ingested coconut, and my tongue swelled up painfully to the point where I couldn’t really taste the heat anymore.  I thought it was spicy but TT knows I’m a spice wuss… 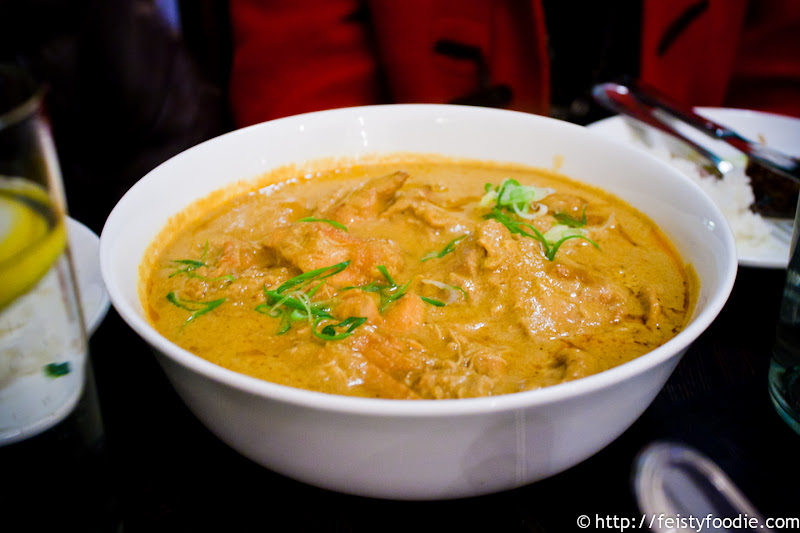 Unfortunately, our table mates had to leave early, but that meant we got dessert all to ourselves!

Carrot Cake with kaya ice cream, condensed milk, gingersnap and cashews. Carrot cake happens to be one of my favorite desserts when I am in the mood for dessert. This was a good Asian interpretation of it. The ice cream was nice and creamy, no ice crystals whatsoever. The gingersnap and cashews were a nice topping for some added crunch.

Yvo says: I would normally just leave this area blank but I’m sure someone will ask me why I didn’t comment. I had like half a bite because I am not a carrot cake person. It tasted OK, but I was way more focused on the other dessert. 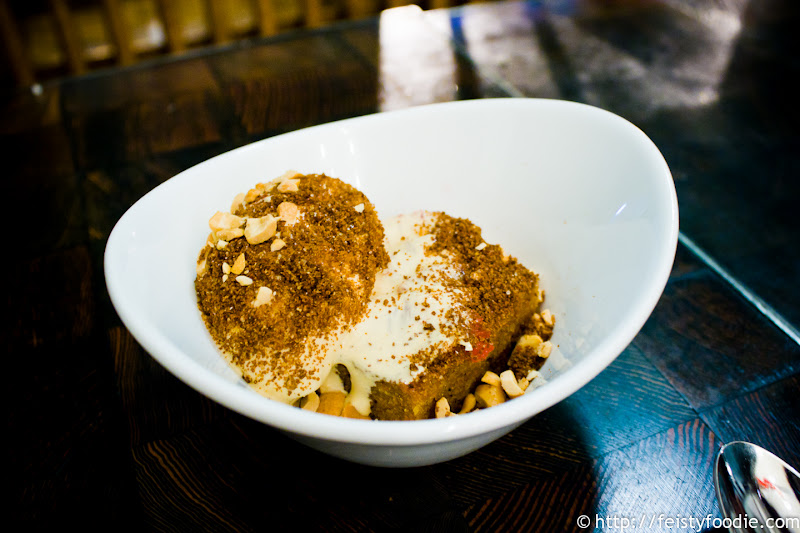 Tang Yeng dumplings with roasted peanut, chocolate ginger ice cream and cocoa nib crumble. The Chef came over before dessert and had a nice conversation with Yvo about Tang Yeng. He basically explained how he makes it and serves it in an untraditional manner. Basically they were a Chinese version of mochi. I enjoyed it since it had just the right amount of chew. It played well off the chocolate crumble.

Yvo says: Dude, the Chinese invented everything. Including mochi. Ahem. In any case, I’ve actually been on a weeks-long search for ‘tong yuan’ – which you’ll read about in a few weeks (I post chronologically) – and was super excited to see this on the menu. Unfortunately, TONG in TONG YUAN means ‘soup’ and as you can see, there is no soup here.  Chef explained that he serves it dry, and I joked about asking for a bowl of the ‘soup’ on the side (it’s really a ginger sugar syrup that the dumplings are boiled in) but none came. Sadface… I wasn’t really joking.  In any case, these were way smaller than I am used to, and I prefer mine to be filled with black sesame while these were peanut, BUT. taking these as a dessert on their own – served still slightly warm, with a nice chew to them and a teeny peanutty filling? – well, I enjoyed it just fine.  The crumble on the bottom stuck to each piece, and the textural contrast was very nice.  I would prefer these not be called tong yuan – lest they get my or other people’s hopes up – but they were quite tasty.  (And TT consented to me eating the lion’s share – yay!) 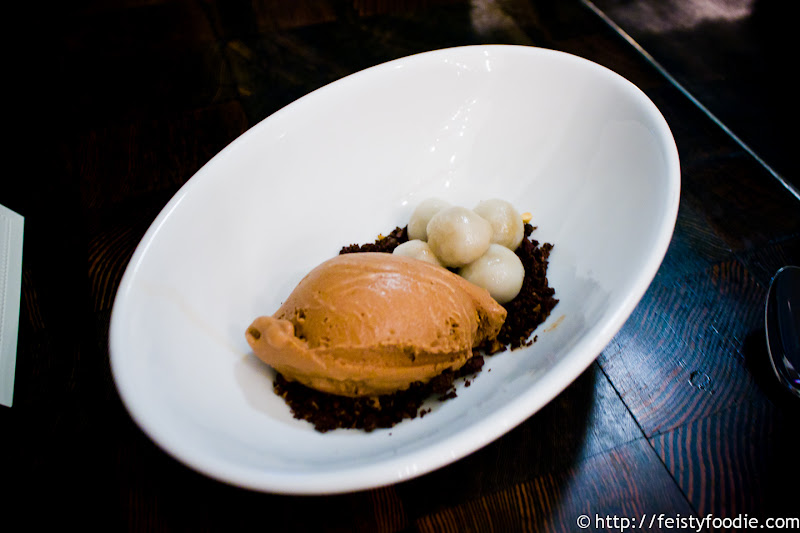 All in all, it was a nice meal to celebrate Chinese New Year. Of course, some dishes were better than others, but that can be said at most restaurants. I didn’t have a chance to ask, but I have a feeling the Chef toned down some of the flavors to appease the American palate. If that’s the case, that’s a shame because I think we can handle it! These dishes are available through Sunday February 5th so head on down the Masak to try it yourself. Thank you again to our hosts for having us.

Please note that everything was courtesy of Masak Restaurant. I received no monetary compensation for this review, nor was I obliged in any way to post about the food and drink, positively or otherwise. This is my own opinion and I feel it was unbiased; you are free to take from this what you will.