One of those super rainy days in December, I told DLS I felt like eating pho… that Vietnamese noodle soup that to me, is just about the best thing you can eat on a cold rainy day.  I realized that though CheeeeEEEEse has mentioned ChaPa’s many times as being his new pho place since moving to the neighborhood, I’d yet to try it, so I decided we should go there – right down the block from Totto Ramen.  (Even on this crazy rainy night where it poured to the point we were both soaked walking 10 blocks, the line was long enough that there were people waiting in the rain.  I mean, really?  Come on.) 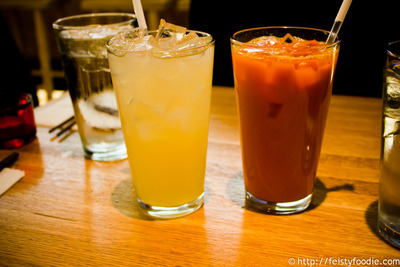 There was no wait at ChaPa’s, and we both ordered drinks – lychee juice on the left for me, Thai iced tea for DLS on the right.  I liked my juice – light and refreshing, slightly sweet.  I didn’t try the Thai iced tea but I imagine it was just fine. 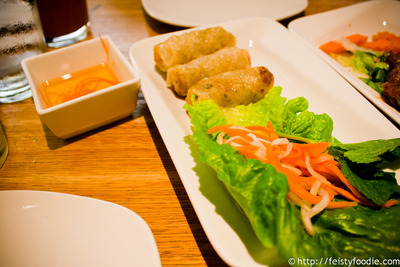 We started off with cha gio, Vietnamese spring rolls.  While the flavor was good, the exterior was slightly soggy and not quite as crispy as I’m used to.  The interior was very juicy, though, to the point where I bit into it, and it exploded onto my plate in a splatter of hot oily juices. 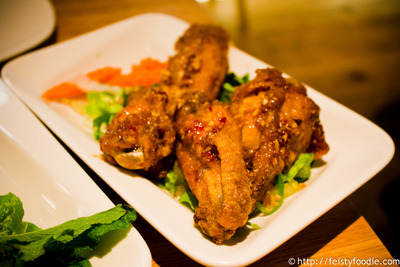 I wanted something different, so I added on the Vietnamese chicken wings.  While these were tasty – slightly sweet, sticky, slightly savory – I didn’t think they were special or good enough to warrant ordering again.  I didn’t regret getting them, though, because while I usually feel super full after pho… well, you’ll see. 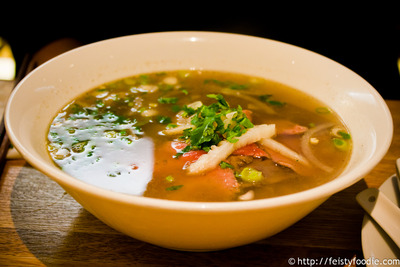 DLS chose the special pho, which he thought was OK. 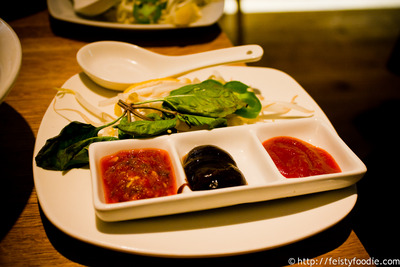 We each received our own plate of accompaniments with our bowls of pho. 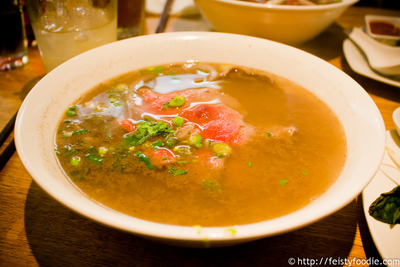 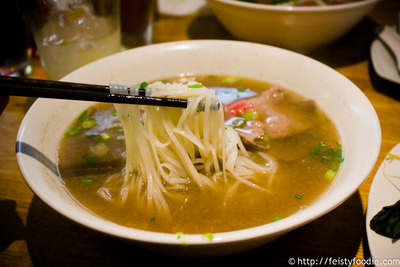 Since it was my first time at ChaPa’s, I ordered the beef pho, plain and simple.  I was surprised when it arrived at how small the bowl was – or rather, how little there was to it.  I know it’s in midtown and being able to get pho in midtown is already pretty awesome, but $8.50 for a bowl that looked like it would hardly fill me up is pretty weak.  I was glad we’d ordered two appetizers, that’s for sure.  As for the broth, it was extremely murky – which doesn’t bother me – but the overwhelming smell of star anise with each sip really bothered me.  I’m not the biggest fan of star anise in the first place, and to smell it each and every time I tried to take a slurp of soup… wasn’t pleasant to me.  Of course, another person who likes or even loves star anise might feel the complete opposite as me!  Taste-wise, though, it didn’t come through as strongly, which worked fine for me.  The noodles were also on the thinner side than I prefer or am used to… and I wished there were more of them!

Yvo says: I thought overall, it satisfied the pho craving, but by no means would I seek this out again.  On a cold, rainy day, I think I’d be better off going for ramen at Tabata (which is also so much closer to DLS’s place that we won’t get completely soaked at least- I hope!), since I crave noodles in soup on rainy days.  However, there are other items on the menu that I might like to try, so I wouldn’t be vehemently opposed to returning… I just won’t be the one to suggest it.
middle of the road; if you really want pho and you’re stuck in midtown, it suffices