For those of you keeping track, you may remember our dinner at Perry St. to celebrate our two year anniversary. Since that is nothing to shake a stick at, we knew it was inevitable that our parents would have to meet eventually. We decided that a nice restaurant not too far from the neighborhood that wasn’t ridiculously expensive nor too loud would be the best bet. We took a look at “The List” and decided that we were way overdue for a return visit to Maialino. The last time we were there it was one of the first times we blogged. Oh how far we have come…

Even after being open for over two years, your best bet to get a table is calling, not using Open Table, twenty eight days ahead of time. The reservation department was strict, but nice about it. The restaurant was quite busy, as expected, but the acoustics were perfect in that we were all able to have a good conversation at our table in the corner without needing to yell.

As we perused the menu, bread service was presented. I particularly liked the dark and crusty sourdough. The breadsticks tasted like Cheez-its in stick form. What’s not to like about that? 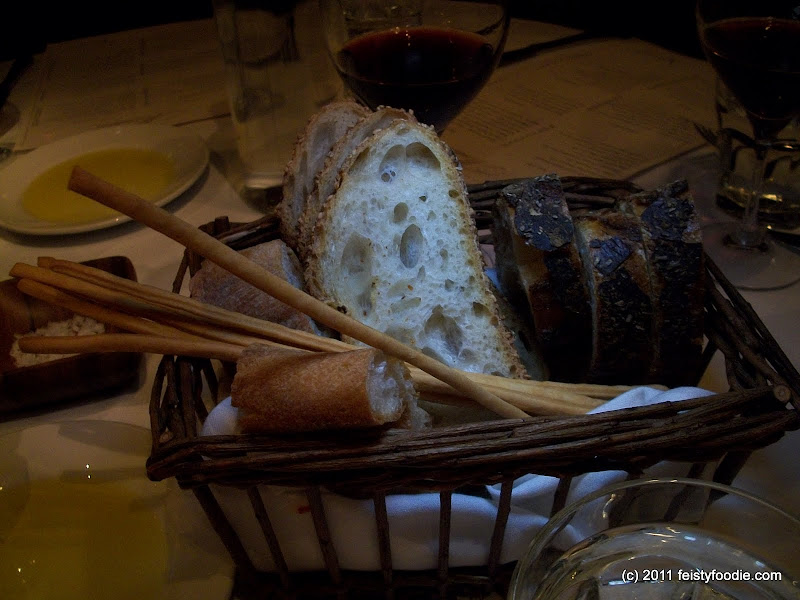 CT says: I loved the Cheez-its! I mean breadsticks… I had about 5 of them and could have kept going.

The rustic Italian menu lends itself to family-style dining, so I did the ordering for the table. Unfortunately, the namesake maialino was already sold out by the time we sat down around 7:30. We were shocked that it was gone so early, but learned that they now accept pre-orders when making reservations. If only we had known. Fortunately for CT and me, we still have fond memories of the time we pigged out on the maialino ourselves. Too bad for our parents though. A return visit for them is already being planned.

We started with some appetizers to whet our appetites.

Grande Selezione di Salumi ($26) This platter was indeed grand as it included every meat on the menu. A couple of the meats are even made in-house. I believe the mortadella(middle) and the pork(left). I particularly liked the spicy sausage. It was the perfect size for the six of us as we all got as much as we wanted. 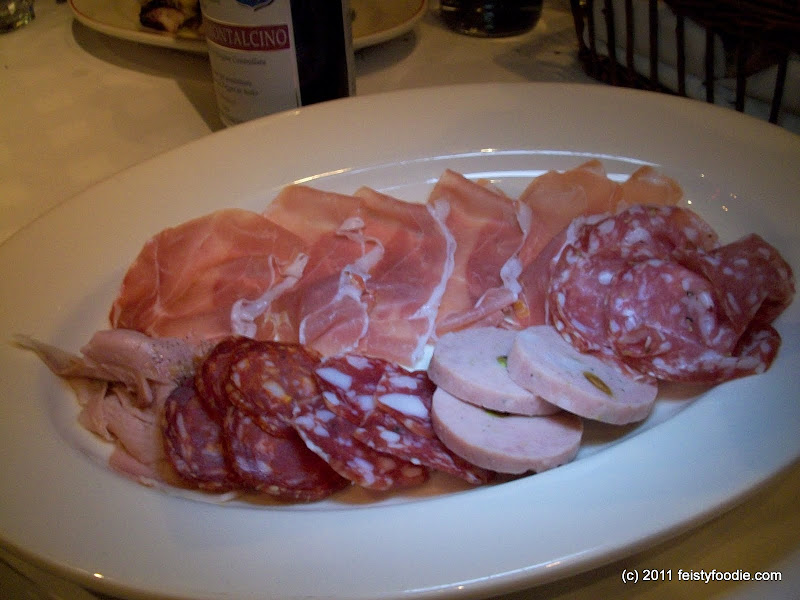 CT says: This was a great selection of meat and start to the meal. There was enough of each type for everyone to try what they wanted.

Verdure Marinate ($16) – Marinated Artichokes, Peppers & Mushrooms. This was a nice accompaniment to the cured meats. Each item was lightly dressed and delicious. I even tried one of the mushrooms and it wasn’t that bad for a fungus. 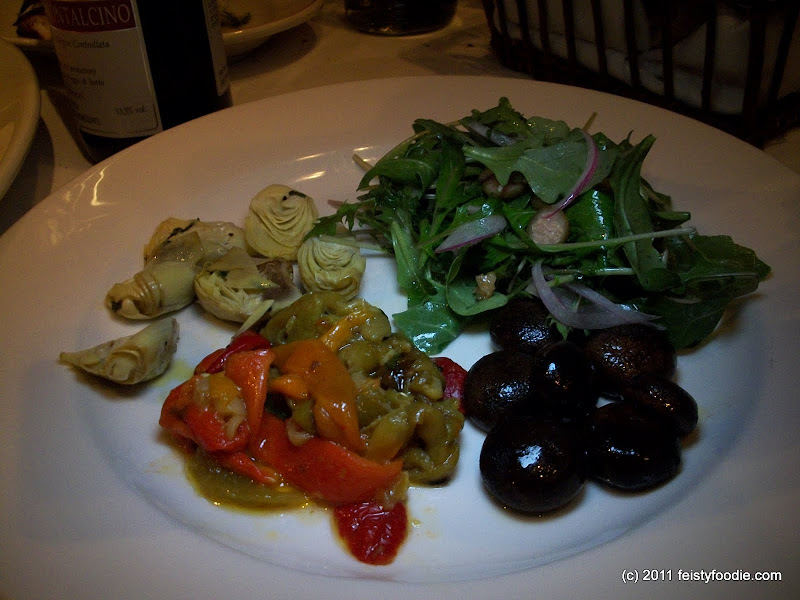 Polpo e Patate ($15) – Octopus, Potatoes, Celery & Lemon. This was ordered for my own selfish pleasure since I am an octopus fiend. But of course, I shared it with everyone. It was excellent. The octopus was super tender and not rubbery at all. Such a classic dish and done so well. It brought a smile to my face. 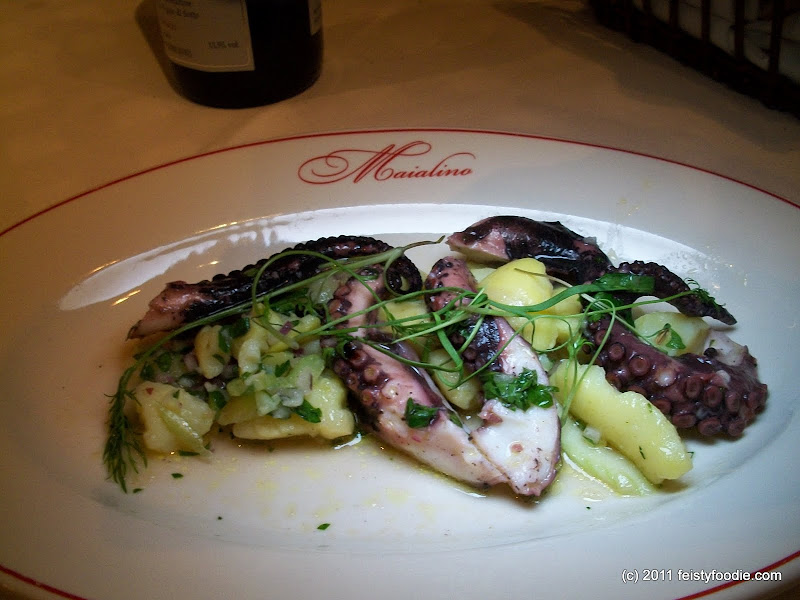 CT says: Definitely one of the better octopus dishes we’ve had. Dining with TT, I’ve learned to truly appreciate a good octopus dish.

I decided a pasta course was in order, so we shared two different selections.

Although they were sold out of the maialino, they still offer a piece of it mixed with pasta in the Malfatti al Maialino ($23). Braised Suckling Pig & Arugula. Unfortunately, this was no where near as good as the maialino itself. While the pasta was cooked perfectly, the flavors were just odd. They were very muddled and almost had a sour aftertaste. It was shame since this was the only taste of the signature dish our parents got. This was the least successful of all the dishes we had. 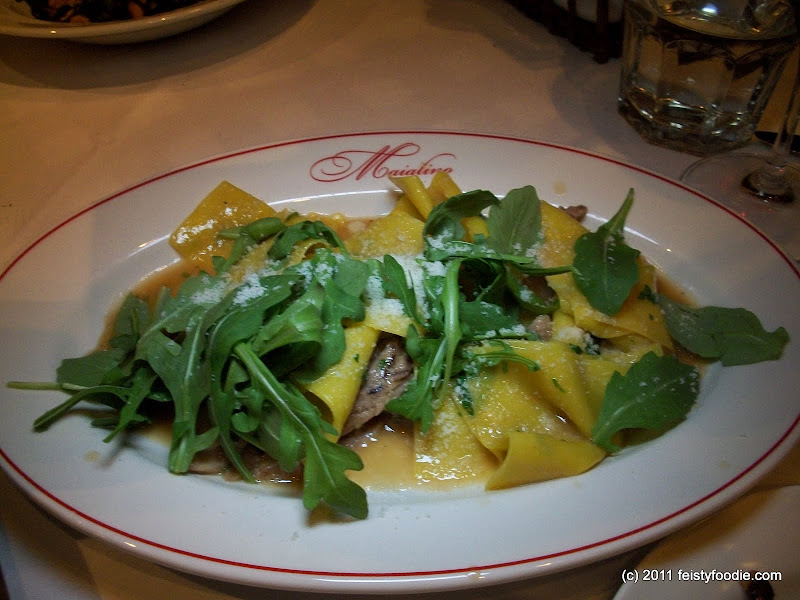 CT says: I have had this here before during brunch and remembered really enjoying it! However, I’ll admit it was a little disappointing this time around. Maybe too many conflicting flavors? Regardless, it was just okay.

Tagliolini Neri ($23) – Sea Urchin & Jalapeño. Once we saw this pasta, we knew it was a must order since it had so many ingredients we love. It sounded like the squid ink pasta I loved at Ai Fiori a while back. Check out all of that uni! This dish more than made up for the failure of the other pasta. The jalapeño was quite muted, which was a little disappointing. I enjoyed this, but am glad we shared it as I couldn’t have seen myself finishing the whole thing. 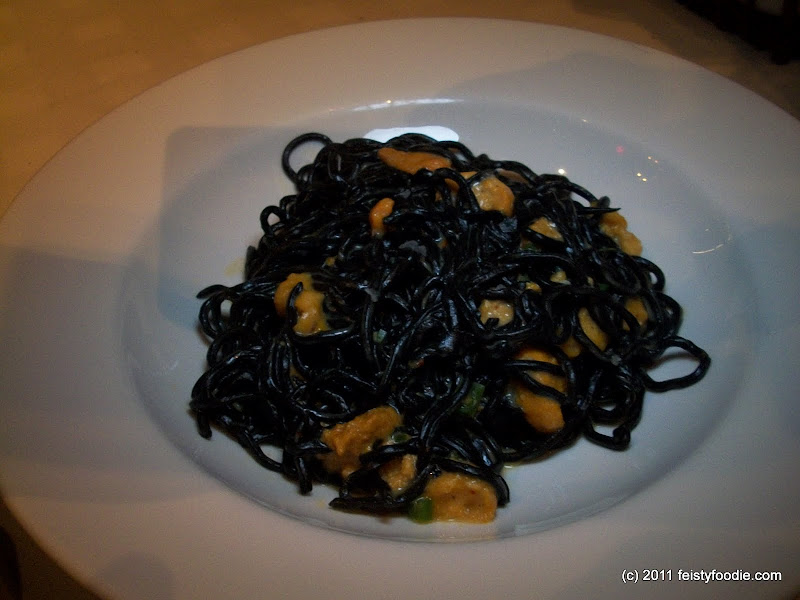 CT says: I could have eaten this whole dish on my own too! Really good! The jalapeno wasn’t too prevalent, which was good since it could have overwhelmed the other aspects of the dish.

One of the nightly specials was the Orata ($62) – Salt Baked Sea Bream for Two & Mushrooms.

It was a nice touch when they presented the fish out of the oven before filleting. 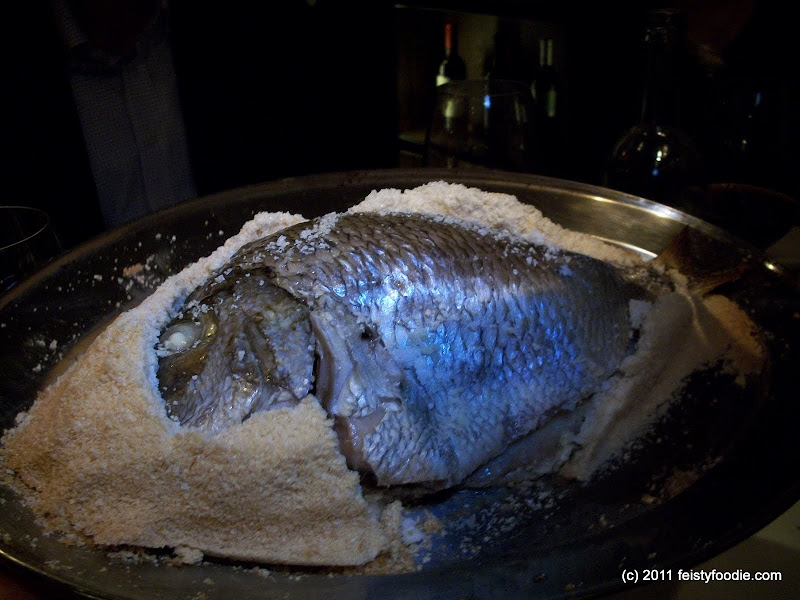 Here is the fish presented with arugala and a variety of mushrooms including Hen of the Woods, Maitake and others. Although it was listed as shared for two, the fish was HUGE! It was more than enough for all of us. The fish was cooked absolutely perfectly. Super juicy and seasoned perfectly with some fresh lemon to make it pop. Don’t worry the salt crust was only for cooking, very little gets into the fish. The server mentioned to us that she liked the mushrooms a lot when we were ordering. She has good taste because they were pretty awesome. I think they were lightly fried so they were crisp and earthy. The flavor reminded me of a nice, crusty slightly charred bread. Although it wasn’t the pork, this fish was almost just as good. Quite possibly the best cooked fish dish I have ever had. 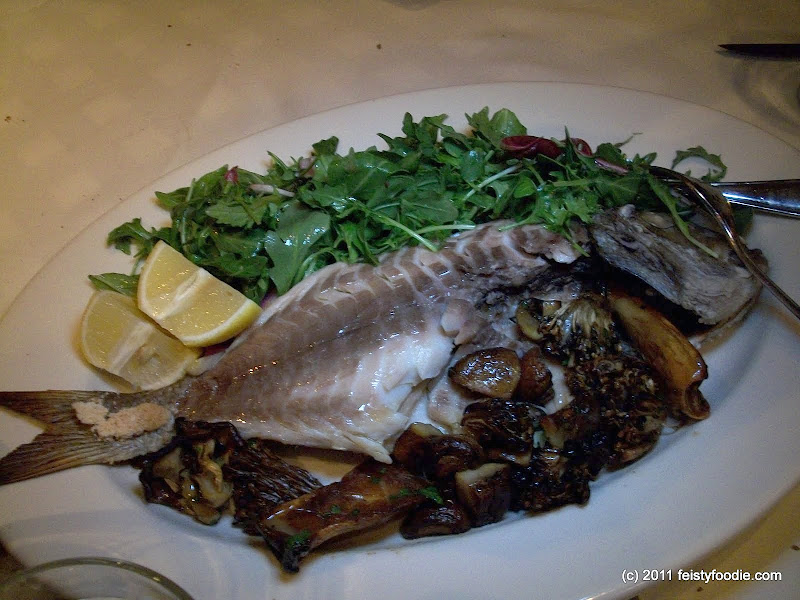 CT says: Truly delicious! I don’t often order fish, as I tend to be a meat-girl, but this was really fantastic. As TT said, so juicy and flavorful… and the mushrooms were great! Amazing!

The other main course I ordered was another special, Coniglio ($48). Whole Roasted Rabbit for Two with polenta. As you can see, this was indeed the whole rabbit. Innards and all. It was also very good, but not for the faint of heart since there were various organs on the place. It was all plenty juicy and flavorful. Rustic in every sense of the word. The polenta got lost in the dish, but it wasn’t really missed. 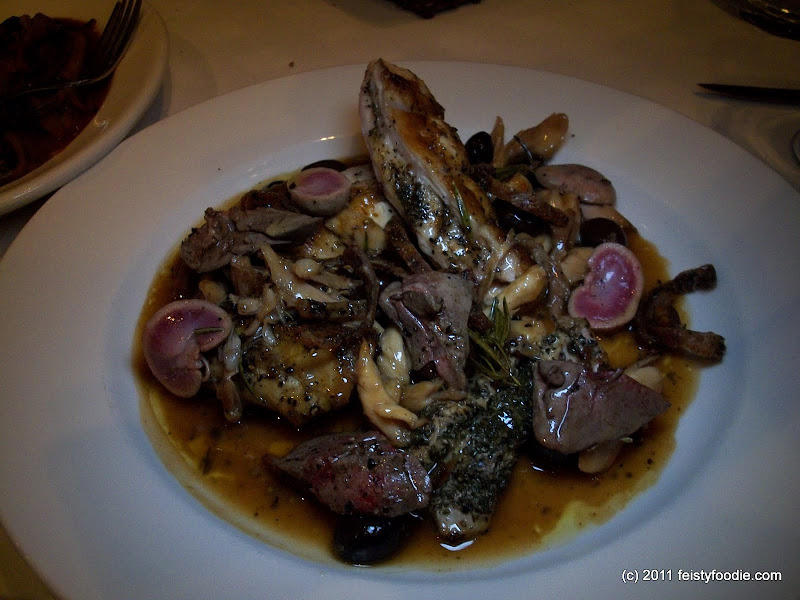 CT says: I’m not a big fan of rabbit, so I only tasted this, but I was getting pretty full anyways and knew I wanted dessert!

One of the mains came with a side of sauteed spinach. It tasted quite good and made us feel better about ourselves. 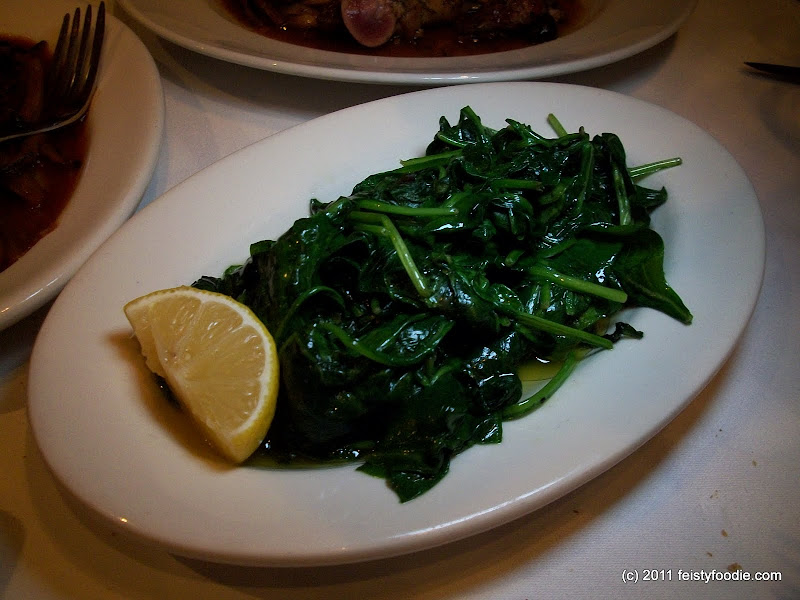 There was also a special side dish being offered on that night that sounded too interesting to pass up. Sauteed dandelion greens for what I believe was $6. They were sauteed in a tomato sauce that had a good kick of chiles in it. I don’t think any of us have had dandelion greens before. They were good and had a similar texture to the spinach. 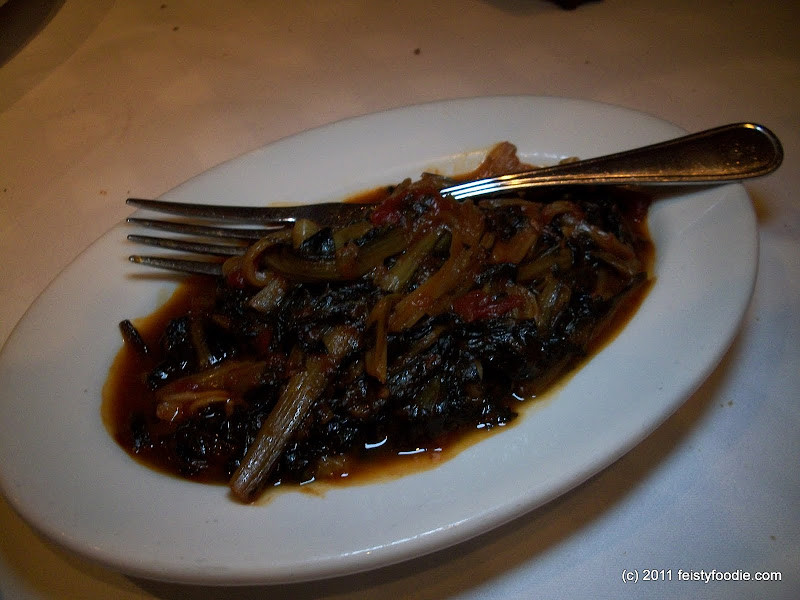 CT says: Another solid dish and a nice accompaniment to the fish and rabbit.

Since it was a special occasion afterall, a couple of desserts were ordered.

Mom and Dad shared three flavors of gelato ($8). I believe they had the caramel, straccitella and buttermilk. 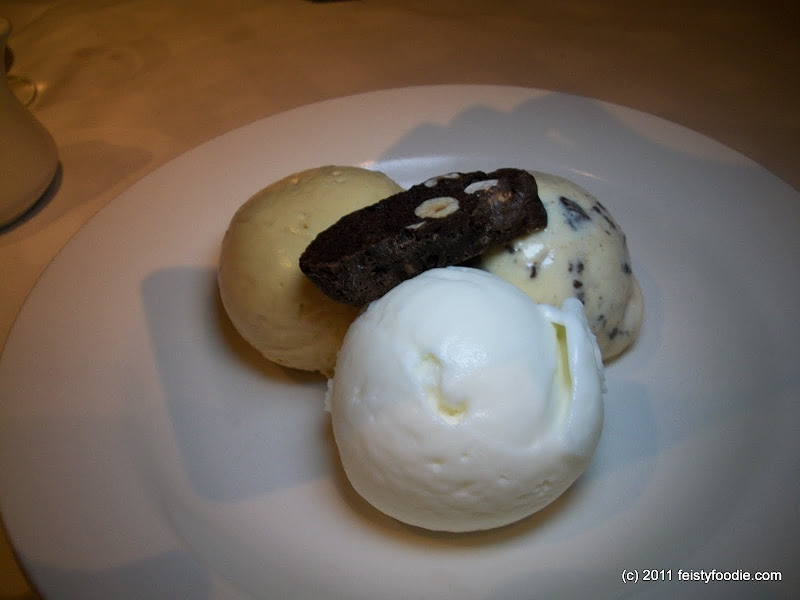 Based on another waitress recommendation, CT’s parents shared the Tortina di Pera Pear ($9). Upside Down Cake & Caramel Gelato. Once again the waitress was spot on and this was declared a big winner. 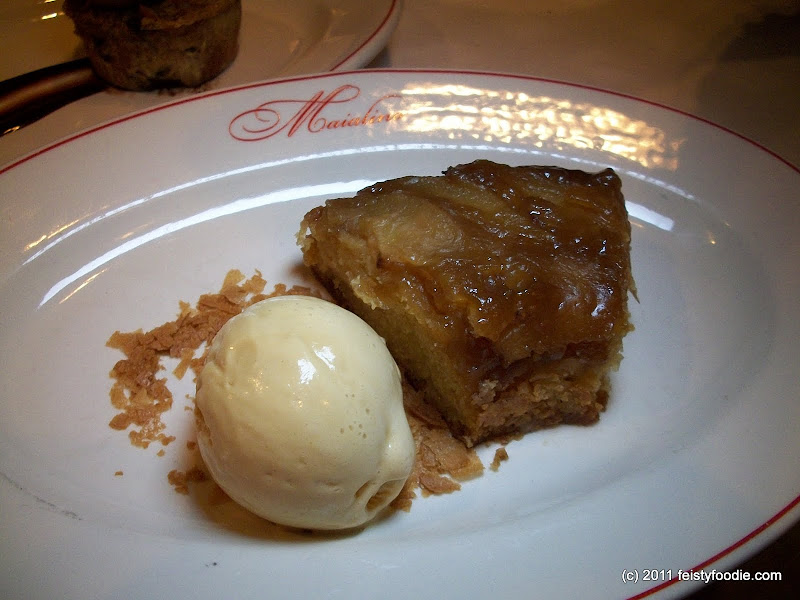 CT & I “shared” the Budino di Cioccolato ($8). Chocolate Croissant Bread Pudding & Gianduja Gelato. I was pretty stuffed at that point, so I just had my standard one bite. I am not a huge bread pudding person, but even I had to admit it was very good. 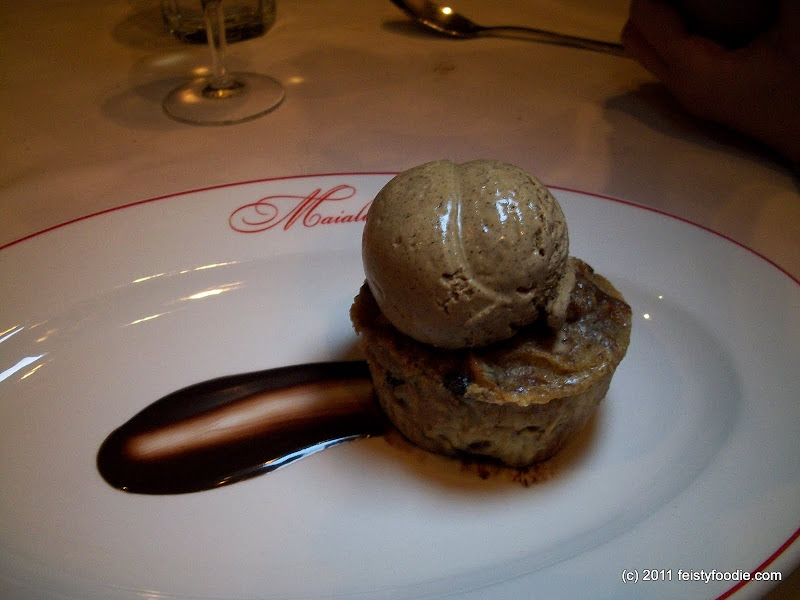 CT says: AWESOME. I was really glad I saved room in my tummy because I inhaled this.

All in all, Maialino once again exceeded all of our expectations. Sure we were disappointed that we missed out on the maialino itself, but the fish we had was truly excellent. As with any Danny Meyer place, service was very good. It ended up being the perfect place for our two families to meet and break bread. Make sure to pre-order the maialino when making reservations!