Having a birthday means eating lots of good food with good friends.  The Monday of my birthday week this year, TC planned a group dinner for me at one of my favorite casual places in New York – I’ve eaten here a handful of times, which is something of a record high for me for this style of restaurant.  I just really enjoy the atmosphere, the laidback attitude, the reasonable prices… And I love introducing people to this place.  Surprisingly, on this night, three of our group of six had never been before, one hadn’t been in years, and then two of us (myself included) had been pretty recently.  Makes me a happy gal when I can show people the joy of Otto! 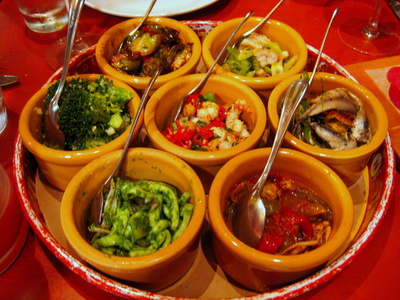 Since the first time I went to Otto, I have always, always insisted on ordering the ‘grande pesce’ which is all 5 small seafood dishes for the bargain price of $21 (the dishes are normally $8 a piece).  We also added the brussels sprouts vin cotto and broccoli.  The brussels sprouts were super sweet and lovely; the broccoli was almost uncooked, but Cheese said he liked it that way.  Per usual, the anchovies and breadcrumbs were my favorite; the mussels pepperonata followed closely behind.  The shrimp e ceci (chickpeas) had more chiles in it than I’d seen previously, but this made that dish more interesting and tasty.  The octopus and calamari dishes were tasty as usual as well – I was very pleased with this tray. 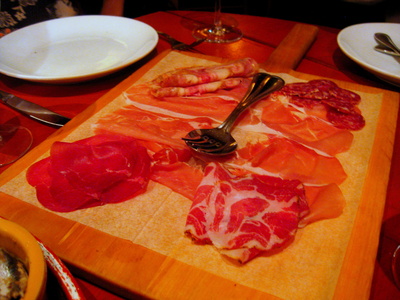 Beer Boor suggested adding the same, but under ‘carne’ – an assortment of sliced, cured meats.  I don’t think I got to try everything on this plate, but that’s okay – there was spicy sausage, prosciutto, braseola, head cheese, etc.  Some of them were tastier to me than others, but all high quality, cured in-house (I think all of them are, but I could be wrong). 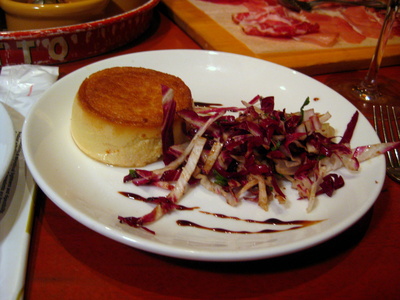 Of course, having enjoyed the sformato so much last time, I had to order it again this time.  That souffle is unreal in its airiness, its cheese taste, just incredible, with the slightest chewy ‘crust’ to it… love!  And the red cabbage on the side was delicious as well.  I love this dish very much.  Yum!!! 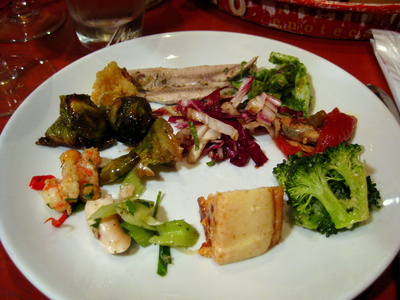 And my composed plate, because that’s how I eat.  Not that this is all I ate – you bet your butt I picked up more of the items I liked – but dearest believe that this was so good!  And I would like some more right now… 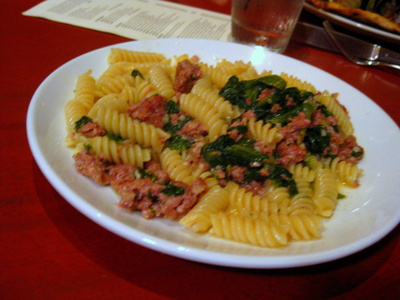 Beer Boor chose rotini with sausage and broccoli rabe.  This is a dish I would never choose for myself, just because I can make it at home, but he seemed pleased with it, commenting that the fennel was strong in his dish.  I tried some and found it very tasty… though he also said the pasta was too al dente for his tastes.  Granted, I’ve heard many people note that the pasta at Batali’s establishments are too al dente, and I’ve even experienced that sometimes… but Beer Boor himself admits that he doesn’t prefer al dente pasta, while I adore al dente carbs and often undercook many of my carbs (noodles included).  So even normal al dente would be ‘too al dente’ for him, I think. 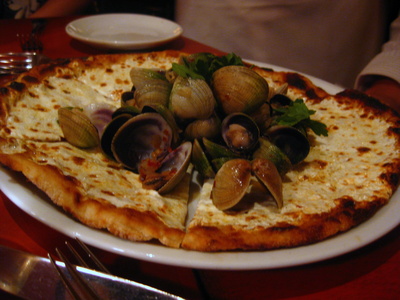 TC wisely chose the vongole pizza after I raved about it – while some may be turned off that the clams are still in their shells, it does show how fresh they are.  I think he liked it a lot! 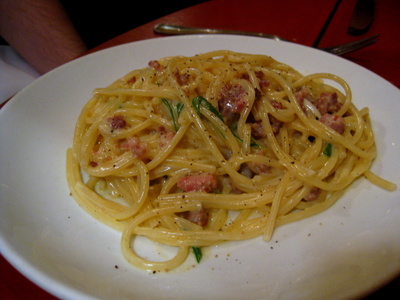 Cheese opted for the carbonara, and I was almost jealous as I watched him clean his plate enthusiastically.  It looked fantastic, and I know he really enjoyed it a great deal. 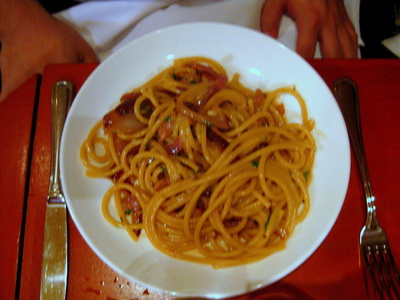 Dean went with the gricia, which he said was too al dente and as far as I could tell, he didn’t like it very much. 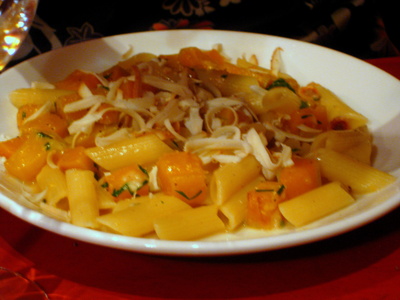 Siobhan chose a seasonal pasta with butternut squash.  Her pasta was definitely a little too al dente for my tastes when I tried a piece – and interestingly, the butternut squash had been treated in such a way that it tasted smoky, almost meaty.  A very interesting dish, though I don’t know that I’d order it myself. 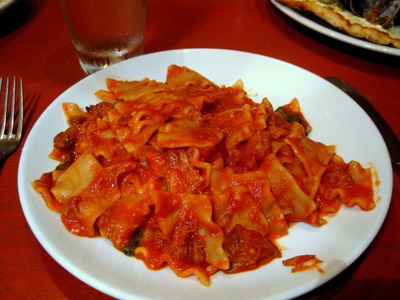 And I ordered a pasta dish with pork shoulder ragout, because it reminded me of this dish I loved at Convivio with pork shoulder ragout.  My pasta was actually cooked fully – not al dente, nor overcooked, just cooked properly – and the flavor was very, very good.  Such a rich preparation made me full very quickly, though, so I had to push aside half of it to take home… TC had shown me the dessert menu earlier and one of them was calling my name, so I dutifully saved room for it 😉 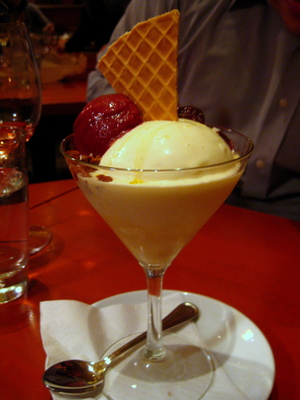 Dean went with the olive oil coppetta, which had figs and a dollop of raspberry sorbetto on top. 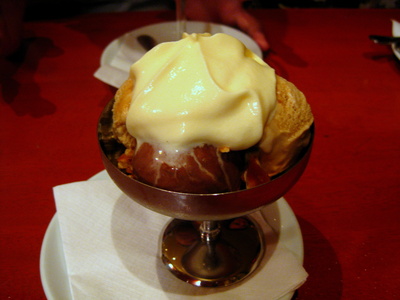 Siobhan got the black & white, which I think I tried but I don’t remember.  Maybe she’ll pipe up with her thoughts? 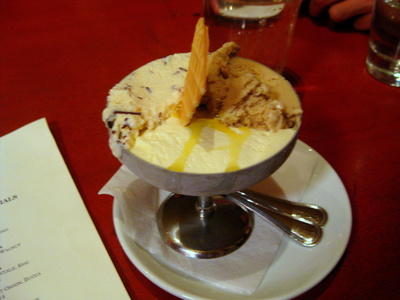 Beer Boor opted for a gelato trio – hazelnut stracciatella, olive oil, and caramel.  I think he liked it. 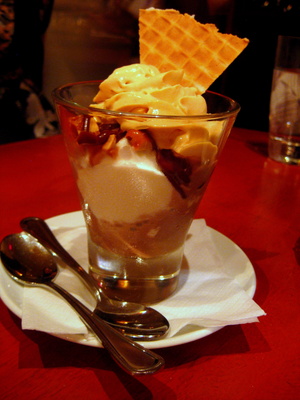 TC had the Guinness, chocolate & peanuts dessert, which I know he liked a lot.  Honestly, looking at these photos, I think I didn’t do much trying of other people’s desserts… haha.  Hopefully they will all chime in with their thoughts 🙂 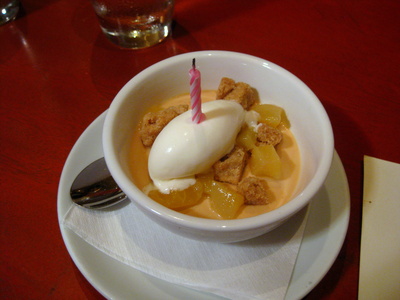 And my dessert: spiced caramel panna cotta with pear crumble and creme fraiche gelato arrived with a candle stuck into it, awww, thanks guys.  Panna cotta is one of my favorite things in the world, and as a result of me ordering it whenever I see it on a menu, I am very picky.  This was fine but not what I want in my panna cotta; more like a pudding, and I dislike when it’s served in a bowl instead of plated by being upended on a plate (personal preference, of course).  I didn’t like the pear bits on top, but I knew I wouldn’t like those going in; I did like the bits of crunchy cookie for textural contrast though.  And the creme fraiche gelato was legit… yum! 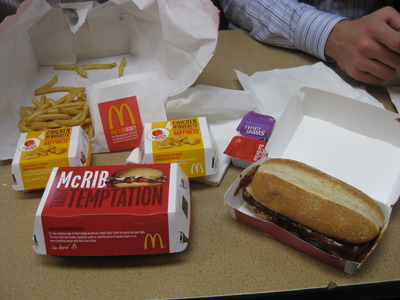 Many hours later, after we headed to a bar to watch the World Series and football (a game that caused me to lose that week’s Fantasy Football match by 0.22 pts – what, me, bitter? No…) and the group had dwindled down to just TC, Beer Boor and I, we hit up McDonald’s for what is quickly becoming a birthday tradition: my birthday McRib.  Hey, McDonald’s, keep bringing that McRib back in late October, okay?  Then we’ll keep eating them… once a year.  Of course some nuggets and fries to go with it as we ate drunk food… though none of us were drunk (I don’t think?) – that was later in the week ;).  And I kind of dig McDonald’s new “sweet chili sauce” for the nuggets – slightly spicy, tiniest kick, with a good sweetness to it.

I don’t think this needs an “Yvo says” – obviously I love Otto as I continue to visit and eat my way through the menu.  I totally recommend the place to anyone looking for a fun, casual place with excellent food that won’t break the bank, and you will find me for just about every occasion with a group.

Thanks to everyone for coming out to celebrate my birthday with me, and a huge thank you to TC for planning – you’re one of the bestest friends a girl like me could have.  Awww <3