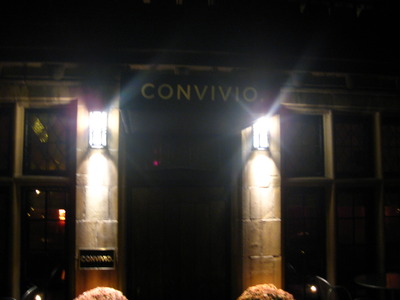 As I mentioned yesterday, I sought to reach 6 Michelin stars in the month of October.  Continuing that trend, we returned to Convivio since we’d so enjoyed it in April when we’d gone and sat in the lounge.  This time, reservations were secured for the day of my birthday in the main dining room, which… pleasantly turned out to be lit well (I wouldn’t say brightly, but well enough that I wasn’t squinting and my pictures aren’t blurry dark blobs like last time!). 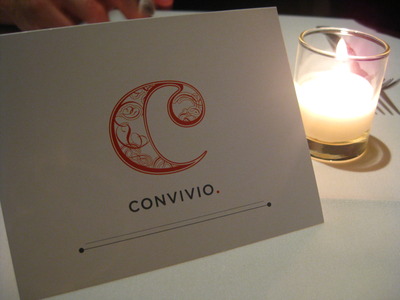 Waiting at our table was a sealed envelope that said simply, “The [BF’s last name] Party” – I was curious, as when we’d arrived, the hostess had sent us on our way by wishing me a happy birthday.  Hmm?  Inside the envelope was this card, which flipped open to reveal 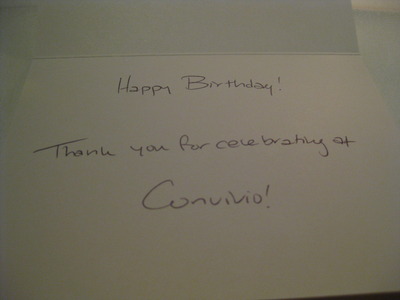 Incredibly thoughtful and a very, very nice touch, I must say; BF had informed them it was my birthday when he made the reservation, and this is how they responded.  Awesome!

A word on the service as well: our server was attentive, helpful, and friendly, but not intrusive.  The sommelier came over to help us pick a wine when we weren’t entirely sure where we wanted to go with that, and following my description, brought us exactly what we’d wanted (yes, it helps to know how to describe wine so he can help, but he still found the right level of what I requested).  I was also pleased when the bill came that the bottle was neither the cheapest nor the most expensive bottle (I believe it came to $62, because I recall thinking it was the same or about the same as our prix fixe menu).  One irk that I got over eventually was that both the sommelier and the server initially kept deferring to BF until I spoke up and they both realized that um, I call the shots (when it comes to food, anyway).  It was also nice that when the sommelier came by to let us taste the wine, he poured for both of us to try (though this happened again the next night at another high end restaurant, so perhaps this is common in high end restaurants).  Overall, I was extremely pleased with our service. 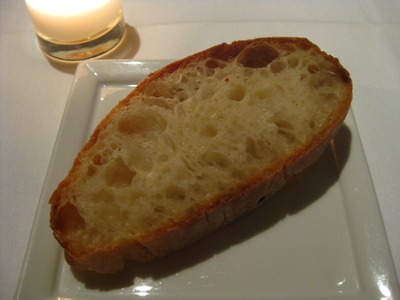 I could get used to the idea of always having a bread guy come around and ask what kind of bread you’d like: I went straight for ciabatta cuz I love ciabatta.  This was no exception; I munched away happily while we perused and discussed the menu, finally settling on the four course prix fixe for $62 a person. 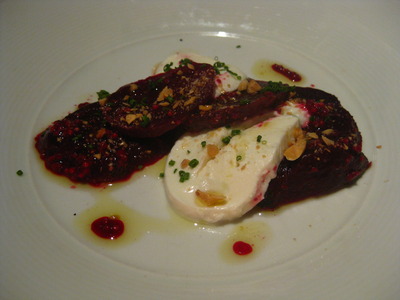 For his first course, BF opted for something new, since his beloved meatballs were not an option.  Roasted beeds along with mozzarella and almonds; he was actually pretty pleased with it, though I wound up eating the rest of the super sweet beets after he ran out of mozzarella to accompany it. 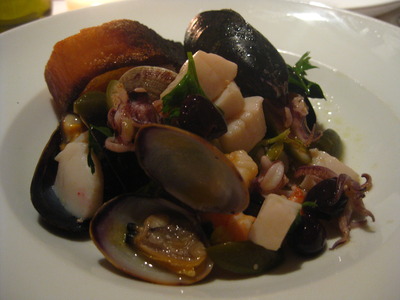 I’m not entirely sure why I opted for the warm seafood salad, since when our wonderful server gave me a plate “for my shells” I immediately cringed and thought “wait, what?” (don’t even ask me what I thought was in it; I don’t really know!)  When it arrived, I further cringed, but I soldiered in and began eating, and this is definitely one of those times when my absentminded “mistakes” was well-rewarded.  Tossed lightly with a wonderfully lemon vinaigrette and scattered generously with pickly caper berries sliced into quarters, I ate the entire plate and wanted to sop my bread in the remaining vinaigrette along the bottom.  The seafood was super fresh, mildly ocean-y, and tenderly cooked to perfection.  Yum.  Sign that I really liked it?  I ate all of it, including the mussels, which I do not tend to enjoy. 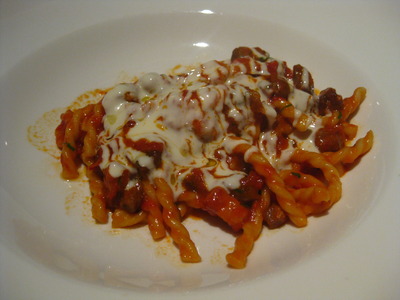 Having loved it last time, BF was most focused on ordering one dish and one dish alone: the fusilli, housemade pasta tossed with a pork shoulder.  I remember practically licking the plate clean last time, and this dish did not disappoint: rich, meaty sauce with chunks of the pork shoulder, wonderfully al dente pasta, topped with the loveliest of all liquid cheeses, BF finished this in no time – I was able to snag a single strand before he inhaled the last of it, and I don’t blame him one bit!  I’m not really sure why I didn’t order my own portion… but he got up for a minute, so I seized that opportunity to start eating the excess sauce off the bottom of his plate.  Yes, I did – well, with a fork. 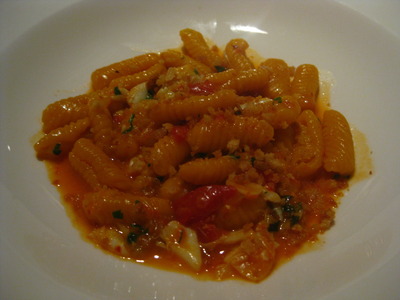 My pasta course was no slouch: malloreddus, or gnochetti with crab, sea urchin and saffron.  Pillowy pasta with chunks of sweet crab scattered throughout, topped with bread crumbs for texture, and sauced lightly with a fragrant broth reminiscent of the sea, a contender for favorite spot.  However, the urchin was pretty nonexistent in my dish; I couldn’t feel any of its signature creaminess or taste the brininess anywhere, which disappointed me, as part of the reason I’d ordered this dish was for some sea urchin goodness.  Still, a solid dish, though it will remain behind the fusilli for certain. 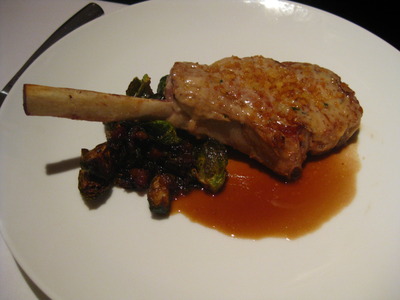 For his secondi, BF chose the parmesan crusted veal chop ($8 supplement).  Underneath the chop lays roasted brussels sprouts with bacon, which, after he tried one or two, he quickly acceded the rest to me, remarking “So that’s why I never eat those when your sister makes them for the holidays.”  Instead, he focused on the chop itself, which he swooned, “It’s so, so tender, wow!” and laid other accolades on when he wasn’t busy chewing.  I tried a teensy piece well after he’d finished eating, so I presume my piece (a left-to-not-be-eaten chunk) wasn’t quite as amazing as the rest, but judging by his near-moans of ecstasy throughout his eating, I would say it was excellent. 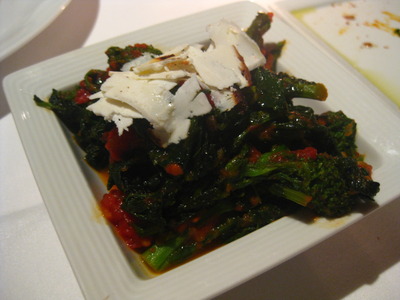 At the last minute, I added on a broccoli rabe side, just to be healthy.  It arrived piping hot and did not cool down as the meal progressed, and I wound up taking it home to eat the next day.  Yummy, even reheated – and I adore that when you ask for something to go, they make no fuss, and simply return to you with a coatcheck ticket to claim your food when you leave, so it isn’t in the way.  Awesome.

(A bit of stereotyping here, but the clientele seems to be a lot of the people who live in the direct area- older folks with money.  Smaller appetites, so they probably are used to boxing food.  That works for me.  Also: I would love, love, love to live in that area, if solely for the sake of having Convivio be my “local Italian joint” – can you imagine!) 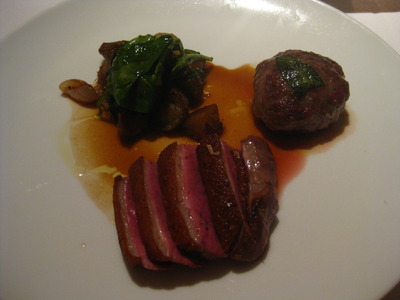 My secondi- duck, sausage, and apples. 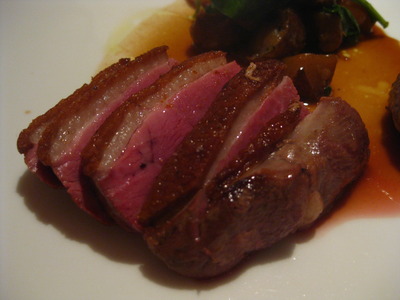 The duck was cooked perfectly medium rare, tender, juicy, flavorful, with a lovely ridge of crisp skin.  My one teensy complaint – a tough piece of sinew? tendon? I don’t know what? was running through the center of this, such that I had to cut around it to eat the pieces of duck.  Not a huge deal, but something I did note.  Otherwise: yum. 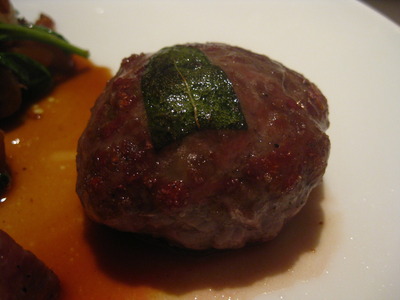 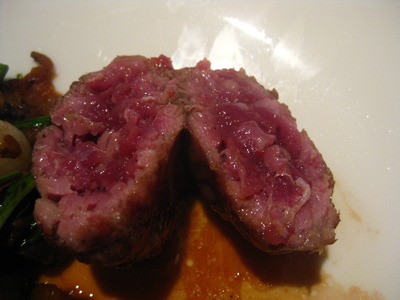 I got an urge to cut it through the center and was greeted with this.  I was pretty uncomfortable with that; though I eat pork medium rare, I’ve yet to eat it that raw, so I checked with the server.  Uh, yeah, so I’d been wondering about a random pork sausage in the duck dish, but it turned out to be duck sausage, so I happily nommed on this.  I ate half and wound up taking the other half (along with some duck slices) home, and it was also still good (albeit a bit more cooked) reheated.  Juicy, flavorful, and tender… I need to learn how to make that! 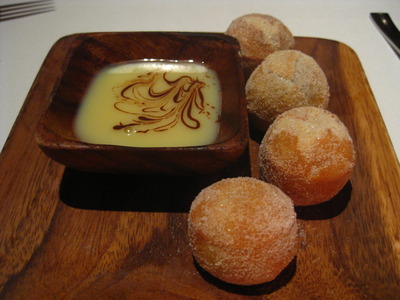 Before the meal, we’d briefly discussed dessert options as I’d shown him the post from last time.  We’d paused over the dessert option of custard filled donuts – bomboloni – and I suggested he’d enjoy those.  If they were anywhere near as good as the ones I’d had from Maialino, I was going to cry big, fat tears of joy… Chocolate custard filled bomboloni with an orange white chocolate dipping sauce. 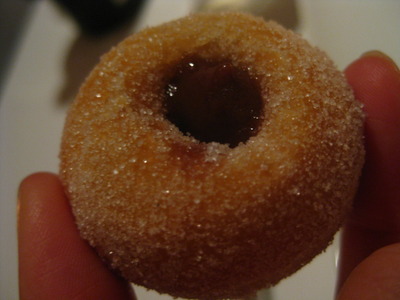 Underneath, the point of insertion.  I took only one bite and handed the rest back over; BF loveLOVEloved these, and began dunking them entirely into the sauce.  I mean, he was going on and on about them.  It was good, but I had my own plate… 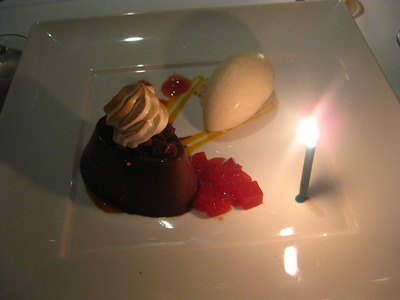 The dessert that had been practically designed with me in mind last time was no longer on the menu – it’d been updated to reflect the season, and therefore, lots and lots of apples.  I’m not big on apple desserts, so I opted for the panna cotta ciocalatto with blood orange.  They brought it over with a lit candle and did not sing – good.  Don’t sing to me at a restaurant, please.  Another thoughtful touch. 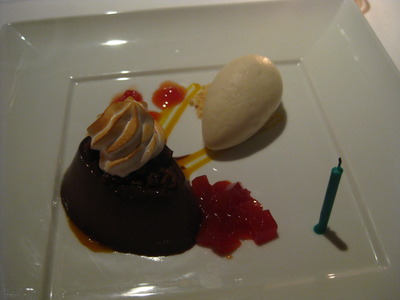 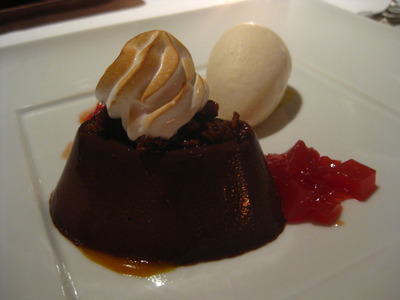 Marshmallow cream on top.  Wow.  The tartness of the blood orange, the mild creaminess of the gelato, and the crunchiness of the crispies on top of the lightly-chocolate-scented panna cotta… YUM.  (Yes, despite its super dark appearance, the panna cotta itself wasn’t heavily chocolate-tasting, which is a WIN in my book.)  Love.  The texture of the panna cotta was spot on to what I prefer – dense and creamy, not too hard and definitely not tofu-soft.  LOVE. 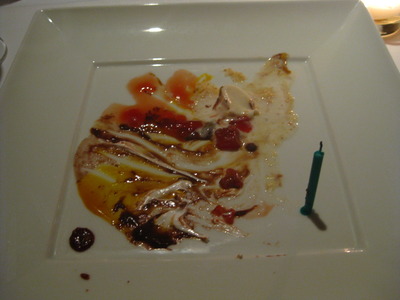 Convivio has been consistently good, proving itself more than worthy of its lone Michelin star (what’s up, Michelin?) and I daresay that it is now one of my favorite restaurants.  BF actually turned to me at one point and said, “So, you’re taking me here for my birthday, right?  Cuz that’s what I want.”  He also went on to explain just how and why he likes it so much, and then declared it his new favorite Italian restaurant.  I’m not sure how much stock you put in this, but personally, I put a lot into that, considering he’s had the same favorite Italian restaurant for easily over 10 years, and took me on our first date there.  This is big, people.

Also, if you can’t justify the cost, they do have a two course lunch menu for $28 that includes the fusilli dish.  If you can only go for one thing, that should be it: the fusilli with pork shoulder ragu.  (I really need to figure out how to make that…)

Yvo says: Incredible value, amazing food, great service, lovely, relaxed atmoshere… there is absolutely no reason one should not visit Convivio at least once in their lifetime.  I left the place on Cloud 9 (aided by the bottle of wine we consumed, I’m sure), and intend to return to try more and more dishes… maybe one day, I’ll order something that’s a FAIL (and maybe stop tacking on random vegetable side dishes), but I somehow doubt it.  Delicious.
highly recommended

« Brunch at The Breslin with Urbanspoon
Tuesdays with TT: Crocktoberfest »