October is quite the birthday month for my and CT’s family. We started with Aunt B’s at Otto then CT’s Dad at Zabb Elee and ended the month with my Mom’s birthday. Due to busy schedules, we celebrated on a Friday night (hanging out with the parents on the Friday? eww.) but it also happened to be my Mom’s actual birthday. I decided it would be easiest for everyone to eat somewhere in the neighborhood. Fortunately, there have been a bunch of new restaurant openings over the past couple months. One such opening was The Three Hens. I read about it on Grub Street and “American comfort food” sounded like it would be pleasing to all of us.

For those of you familiar with Curry Hill- The Three Hens replaced the Turkish restaurant, AY Kitchen. The new restaurant was very nicely decorated in a rustic farmhouse decor with lots of those popular Edison light bulbs. I hope they put up a winter door soon because right now there is no vestibule so every time the door opened the whole restaurant got cold.

Service did not start off well as my Dad encountered some problems ordering the wine. Apparently, the wine list the waiter gave us was not up-to-date so the first four choices were not available. It didn’t help that the waiter had to check what they had after every selection. My Dad has cooled off in retirement, but I could see he was getting frustrated. Fortunately, the wine we ended up with was quite good and service was good throughout the rest of the meal. 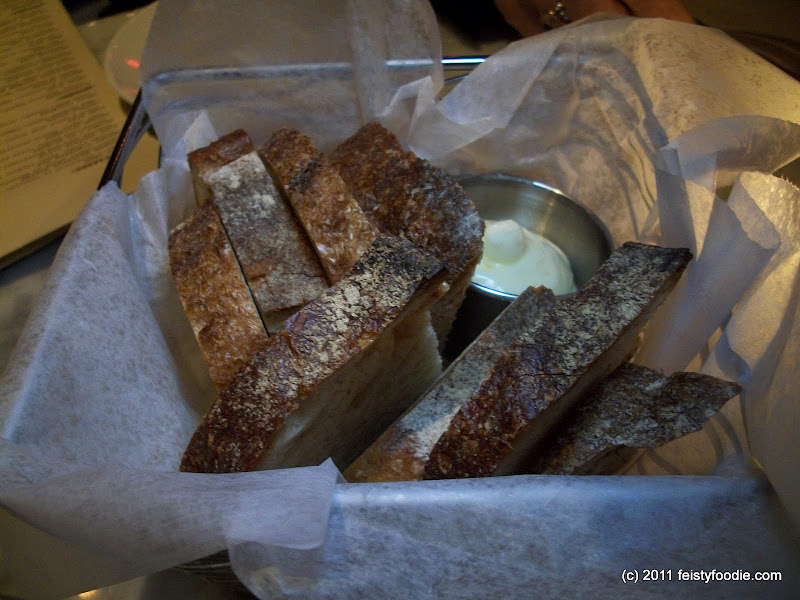 The appetizer section of the menu was confusing and quite expensive so we decided to share a few for the table.

Lamb Ribs ($14) Sweet & Spicy Lime Glaze, Saffron Wild Rice, Cilantro. The portion size was pretty good to share with five people. I don’t see how one person could eat this themselves and still have room for a main course. The glaze was sticky and delicious with plenty of tang from the lime. I didn’t get much spice but it still tasty good. The fresh cilantro on top was a nice addition for some more flavor. 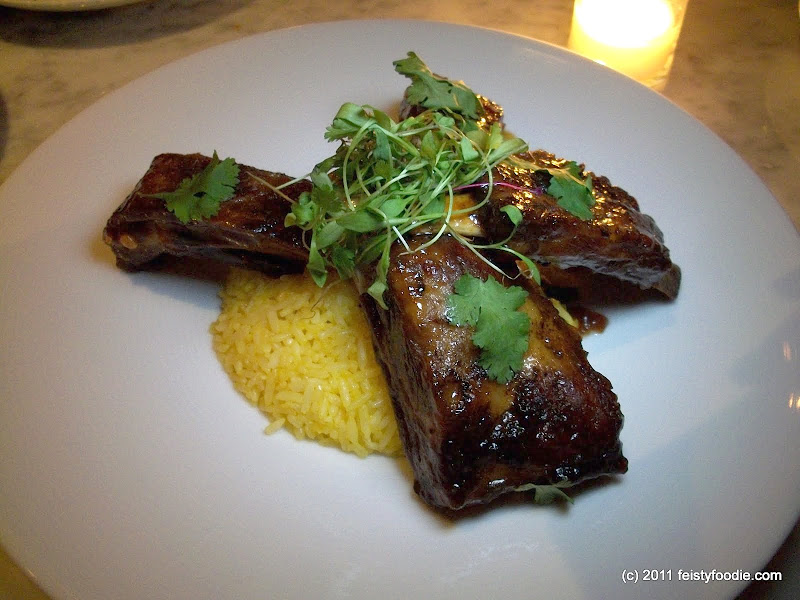 CT says: I’m a big fan of ribs of all varieties, so I was excited to try these. Definitely more sweet than spicy, but tasted pretty good and had a good amount of meat on the bone too.

Chicken Meatball Slider ($9) Spicy Tomato Sauce on Parmesan Rolls. When I read this on the menu and checked the other prices, I was worried that the portion only consisted of one slider.

Fortunately, the waiter informed us that there were three sliders. These were tasty little suckers. The tomato sauce was fresh and tangy, while the roll held up nicely. The rolls weren’t very parmasaney, but that was fine since we all just had half a slider. 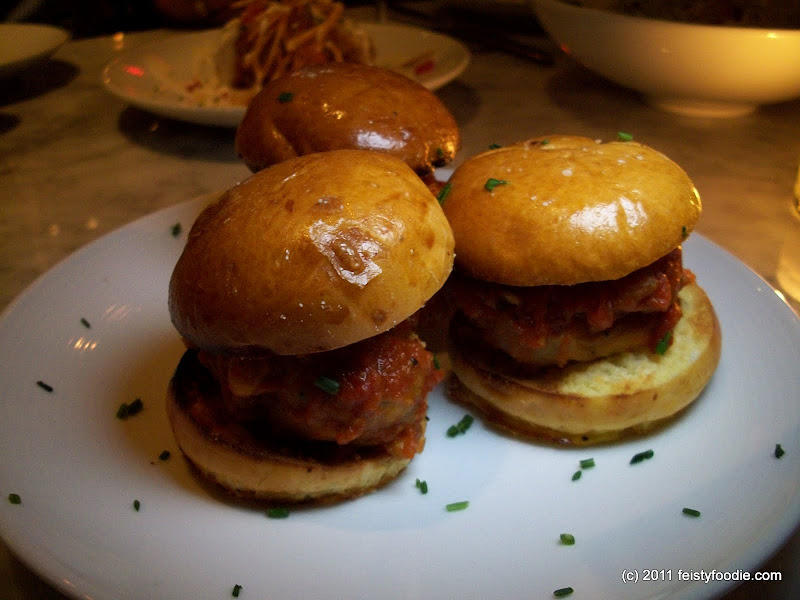 CT says: I liked these, but didn’t think there was spectacular. I’ll stick to The Meatball Shop for my meatball craving. And again, not spicy.

Prawns a la Plancha ($15) Spiced Corn Puree, Fried Potato Sticks, Citrus Aioli. This was one of two appetizers priced at $15. Pretty high, but since we were all sharing I guess we could justify it. Unfortunately, we were all disappointed when it came out. THREE SHRIMP! They weren’t even particularly large shrimp. Yes, it tasted good, but was not worth $15. I liked the crunchiness of the potato sticks with the chewiness of the shrimp.
DO NOT ORDER THE SHRIMP APPETIZER! 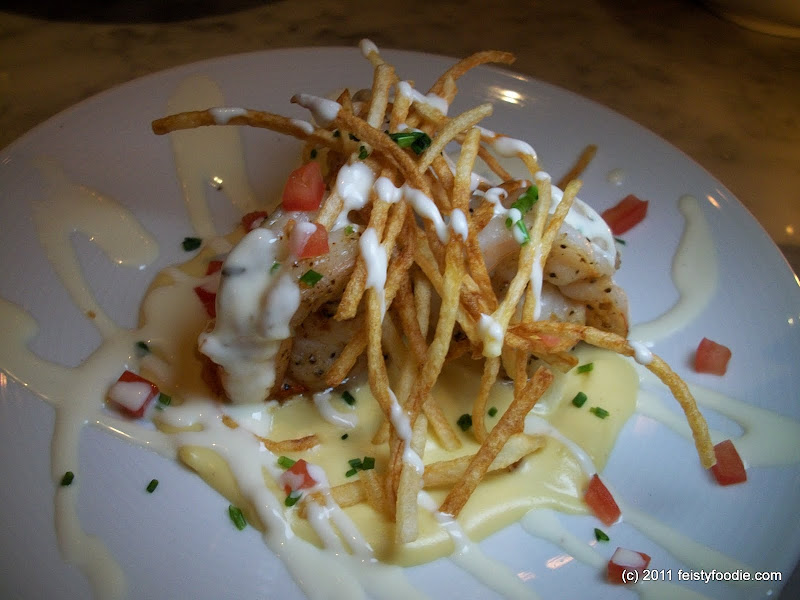 Crispy 5-minute egg ($9) Frisee Salad, Bacon Lardon, Bacon Vinaigrette. This appetizer piqued CT’s interest so we also ordered this. It’s a salad, so it’s healthy! It was a nice sized portion with plenty of bacon pieces and a nice light dressing. The egg was only lightly coated in breading, so it wasn’t very crispy. 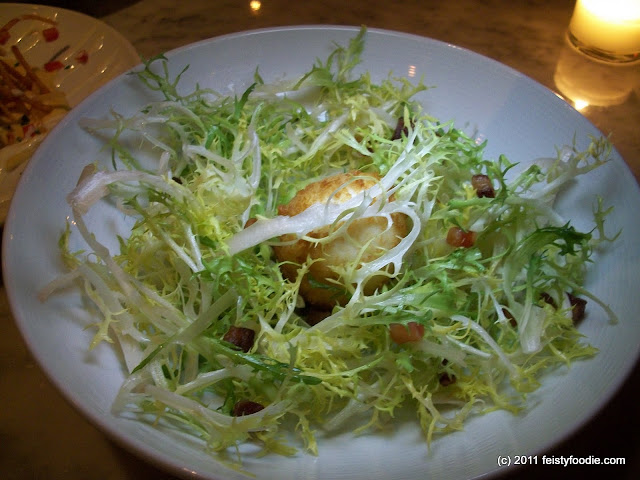 CT says: I really really liked this dish. The egg was cooked perfectly, and I loved the way it coated the salad. Though frisee isn’t really my favorite type of lettuce and I find it difficult to eat, with the little curly parts going everywhere, it held up to the egg well. 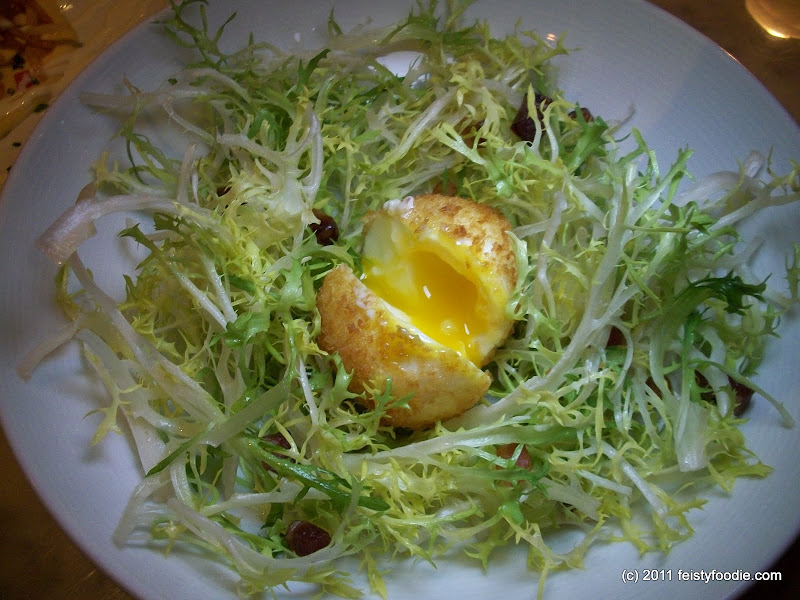 The family was thoughtful and allowed me to take pics of their entrees.

Mom had the Atlantic Salmon ($22) Vegetable Fricassee, Dill Pistou. She said she like it. 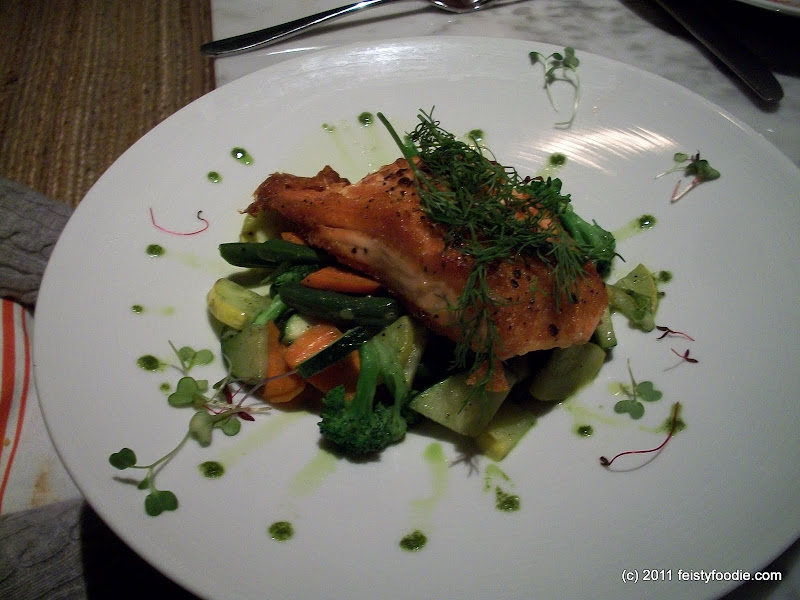 Aunt B, surprising no one, ordered the Bouchot Mussels ($15) Smoked Beef Broth, Scallions, Grilled Bread. She added fries for $4. It didn’t look as good as the mussels from Jubilee. 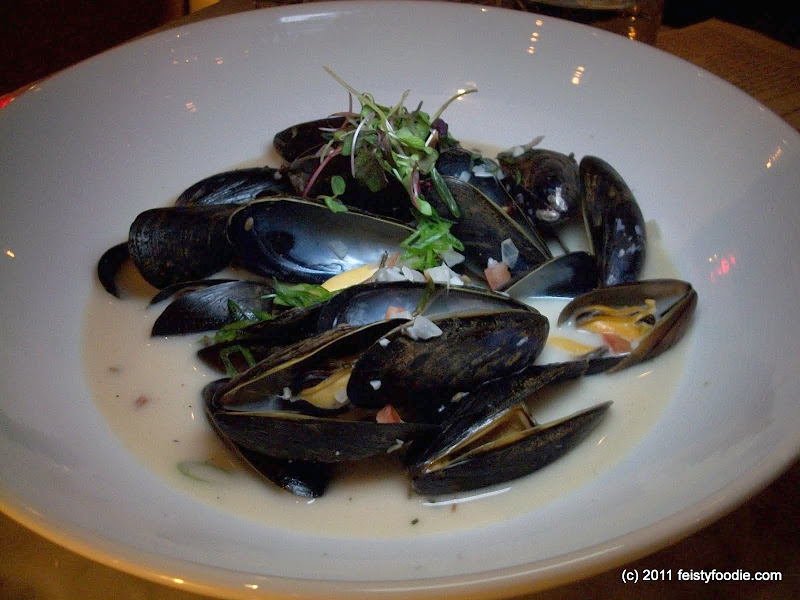 My Dad and CT both had the Pork Loin ($21) Spiced Kale, Apple Sauce, Maple-Bourbon Glaze. It seemed like more of a chop than a loin since it had some bone, but it was still delicious. Both had no problem finishing it. 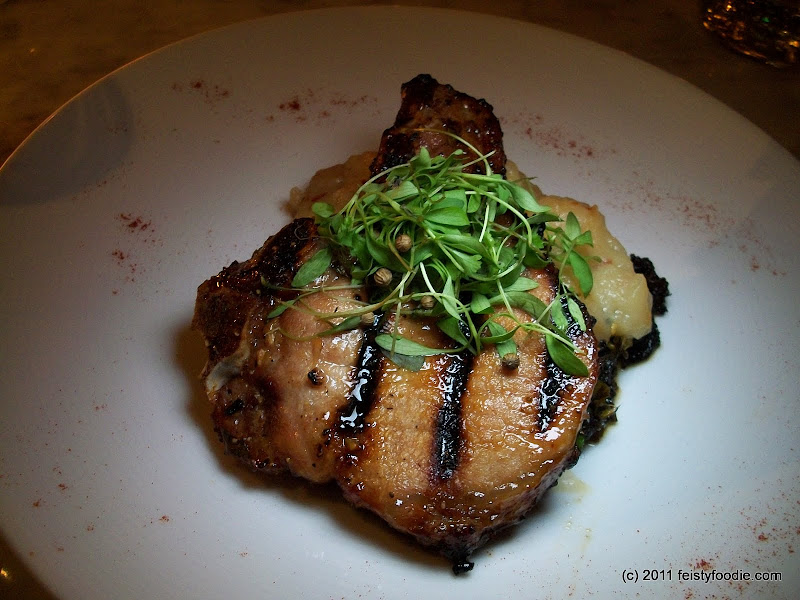 CT says: It was cooked well, not dried out at all, and had a nice glaze without being overly sweet. I would happily eat this dish again.

I had the Lamb Burger ($18) Spicy Citrus Emulsion, Lettuce, Mushrooms, Pickled Radish, Zucchini Fries. This was a pretty good burger. It was nice and juicy and retained plenty of lambiness. I didn’t even mind the mushrooms on top, which only added some texture. The citrus emulsion had a nice tang that complimented the gaminess of the meat. Everyone enjoyed some of my zucchini fries eventhough they cooled off quickly and became quite limp. If you are in search of a good lamb burger, I would definitely try it here. 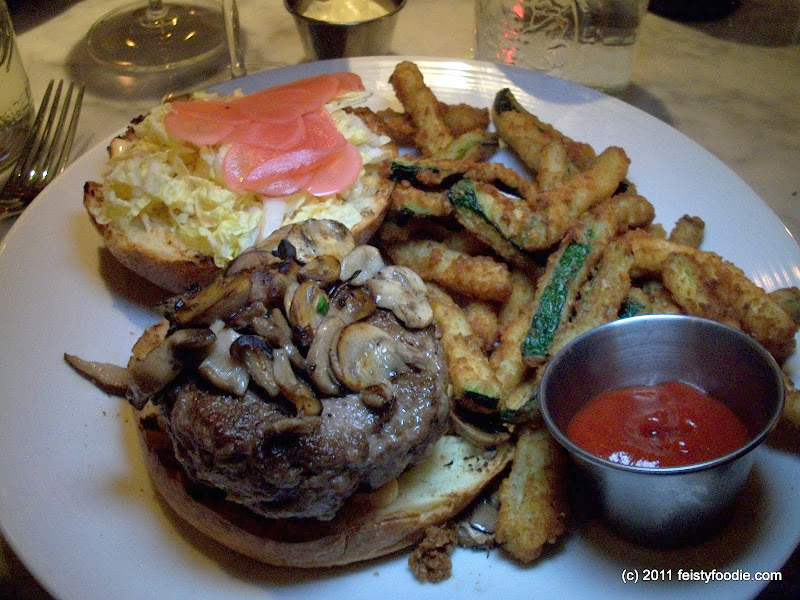 We were all pretty full, so passed on dessert, but the waiter brought out a piece of cheesecake for my Mom. She shared with all of us, but I skipped on a taste.

All in all, The Three Hens was a nice choice for a meal in the neighborhood to celebrate a birthday. Prices were high, but everything tasted good. It will be interesting to see if the restaurant can find success in Curry Hill. Happy Birthday Mom!