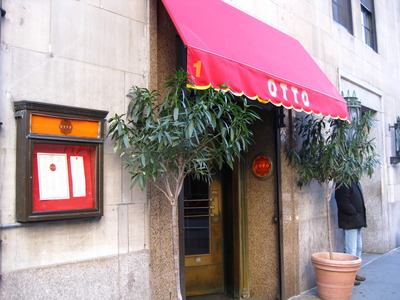 A couple of weeks ago, Serious Eats: New York posted this rave of Del Posto’s new lunch menu.  I had a half day coming up, so I scrambled to get a lunch date and then a reservation.  As you can see by the above photo – which is NOT of Del Posto’s front door – I probably should have done it the other way around and found myself a reservation before a date.  Whoops. 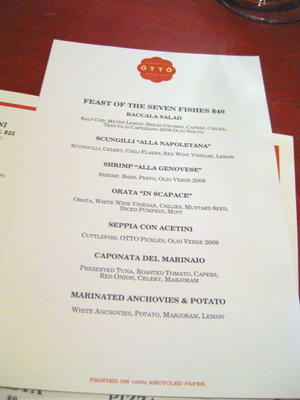 In any case, Lizz and I decided if we couldn’t have Del Posto, we’d have Otto – one of Batali’s other restaurants that we’ve both been keen on trying.  The above is the Feast of the Seven Fishes menu they were offering when we went on Decemebr 18.  We didn’t opt to get it, but it seemed very interesting and I thought reasonably priced.  Yummy. 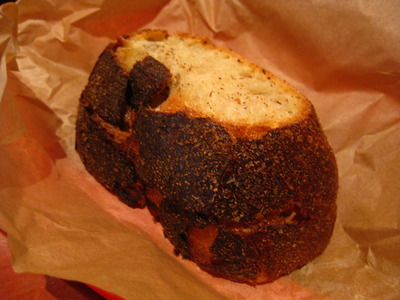 Our bread came wrapped in paper and was deliciously chewy.  Great for dipping later. 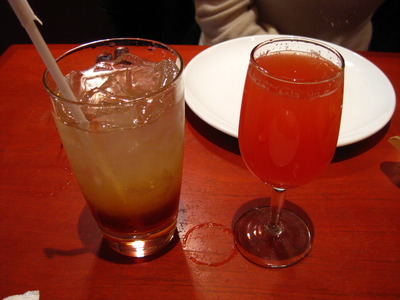 Being a celebratory lunch, we both opted to have a drink.  I think Lizz’s was the Sicilian iced tea, while mine was a bellini of some sort (passion fruit? I forget).  Both yumm. 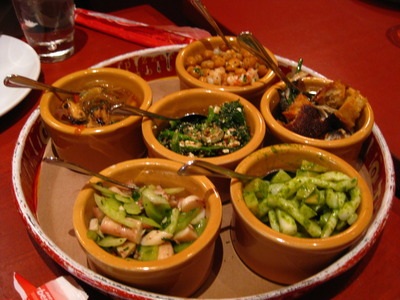 Hiding on the menu is this interesting little item: under the heading ‘fish’ there is a section of 5 dishes.  Each one is $8, or you can get all five for $21 – nearly half the price.  Dude.  Hello!  It’s called ‘grande’ but you can just point and say “I want them all!”  (There’s six dishes above because we also added a veggie to be healthy-ish – it’s the one in the middle.) 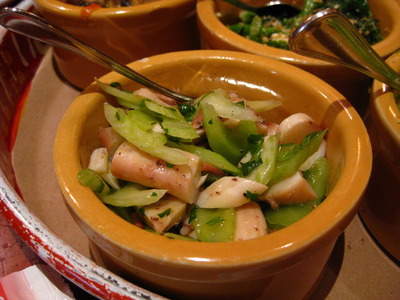 Octopus, celery, lovage – tender octopus with crunchy celery.  I almost wish it was a bit brighter – compared to the rest of the dishes, this was only alright, but that doesn’t mean it was bad! 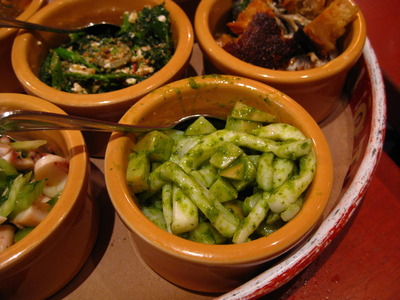 Calamari & potato – I loved the textures in this dish – the calamri was springy and the potato almost slightly undercooked, nearly crunchy.  Very yummy. 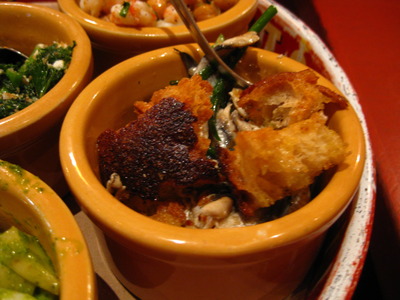 Anchovies with breadcrumbs – honestly, Lizz mentioned this dish before we decided to get the Grande, and I was a little bit wary.  Anchovies can be super fishy and that turns me off… but these were REALLY GOOD.  Maybe even my favorite of the night?  Maybe.  The giant “breadcrumbs” made from excellent bread were a great foil against the tiny silver fish… which were much more vinegary than I’d expected.  House cured maybe?  Delicious regardless.  Taking a lil fish from the bowl and eating it with a “breadcrumb” was excellent.  I’m getting hungry thinking about it… 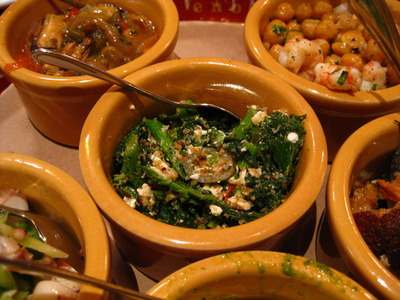 Our vegetable, Spicy Rabe with Ricotta Salata, had some sliced peppers mixed into it (I want to say small Jalapenos, but I could very well be wrong), but wasn’t too spicy.  A great veggie to have on the table though not very strongly flavored. 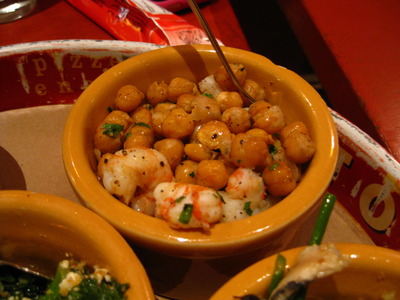 Shrimp, Ceci, Chiles – the chickpeas were way harder than I’m used to, which provided a nice textural contrast with the bouncy shrimp.  While this isn’t a bad dish, it wasn’t either of our favorites – just not much going on for it to really stand out amongst all the other dishes. 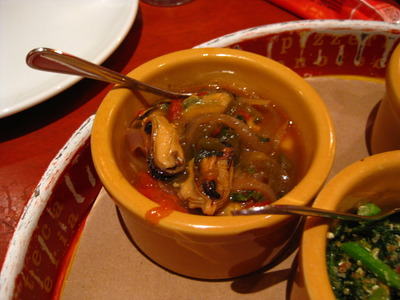 Mussels, pepperonata, mint – haha, I’m laughing because I looked up the menu online to get the proper name.  Well, when we both tried it, we were both surprised again by how vinegary it was.  Also, I keep re-trying mussels to see if I’ll like them, especially when someone says “ooh, these are good mussels” but I’ve yet to eat them where I thought they were good.  I want them to be plump, juicy, not overcooked and yucky!  Well, these were plump & juicy and quite yummy!  Oh, why I’m laughing: when we tried this, I said “it almost tastes like pepper & onion sausage without the sausage” – I hadn’t looked carfully at the dishes’ descriptions on the menu before we ordered this tasting – pepperonata means peppers & onions.  Duhhh.  But this was much more vinegary than I’ve had in the past, but in an excellent way, cutting through the sweetness of tomato nicely.  I’d definitely order this again. 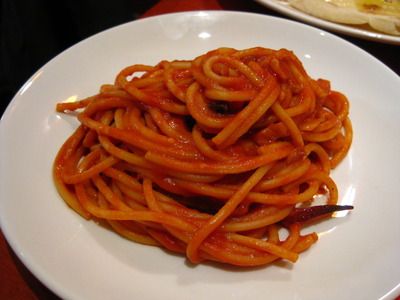 Our pasta choice was based entirely on the fact that I am always stumbling across the recipe for this dish… and it’s splashed all over Batali’s site(s).  Bucatini al’amatriciana – guanciale, tomato, pecorino – really quite delicious.  Pasta perfectly cooked, a heavenly sauce that coated each strand perfectly, and bits of chewy guanciale strewn throughout… AWESOME. 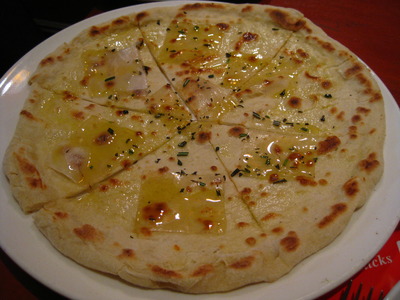 Last and well, sort of least – the infamous lardo pizza.  Slices of pork fat atop a rosemary flatbread. 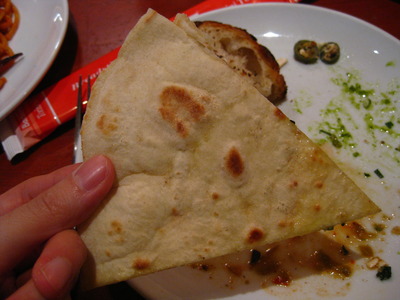 Upskirt.  Notice the pizza does not bend. 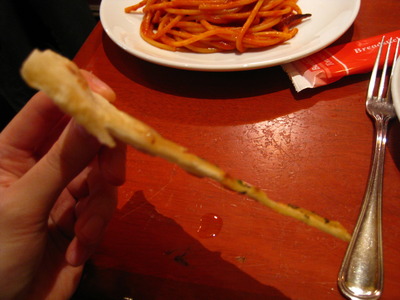 Side shot so you can see how thin it was.  Notice the drop of oil on the table from my slice.

Okay… so it was interesting – eating slices of lard, y’know, kinda chewy which I didn’t expect, nor did I expect slices.  But the pizza itself… that’s not pizza.  It was like a cracker.  I mean, it’s tasty, but I don’t know that I’d call that pizza… I’m a New Yorker and into the thin crust thing but there’s a line that I drew in the air somewhere, this falls below that.  Too thin.  Tasty… but too thin. 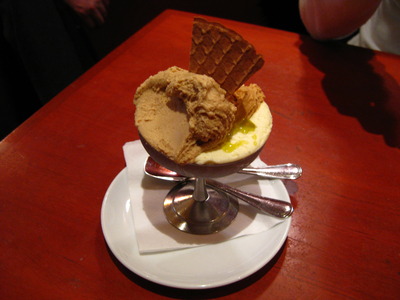 One of the reasons I eat with Lizz?  Even after stuffing ourselves with all that, we both agreed that we were at Otto, we were celebrating, and we should get dessert.  Above you can see the Guinness Stout (on the left) and the olive oil gelati in our trio. 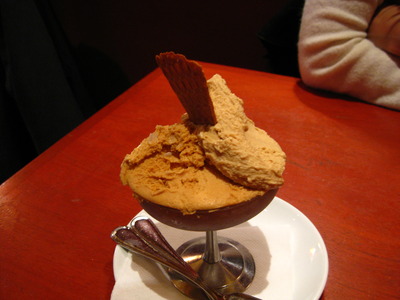 And in this shot, you can see salty caramel and the Guinesss Stout.  Actually, now I can’t remember if the Guinness was the darker one or not… whatever!  The Guinness tasted like Guinness, of which I’m not a huge fan but it was interesting and tasty.  The olive oil gelato wasn’t bad but wasn’t swoon-worthy like all the blogs make it sound like!

BUT THE SALTY CARAMEL.

You already know my obsession with salted caramel and how I don’t seem to ever think it’s really quite salty enough.  Well, when they say SALTY caramel – not SALTED caramel – they mean salty.  Omystars.  Salty caramel gelato is definitely going to be my new thing whenever I go here.  And I’ll be back.  Oh, I will be back indeed, many times (I’ve already tried twice more since we went… hehe).

(Side note: While our service was satisfactory, we both disliked our waiter’s haughty attitude.  It was… a bit like he thought he was too good for his job.  We both got the impression he was a “struggling actor hoping to make it big” which is fine but honestly, ease up on the attitude… It was just our guy though, I’m sure.)

Yvo says: The prices here are totally reasonable which surprised me (I forgot this is the more casual restaurant in Batali’s empire).  This is also the first Batali restaurant I’ve been to that I actually enjoyed, not for lack of trying!!! but that really surprised me.  There is no doubt that I will be back as many times as my quickly dwindling wallet allows – everything was solidly enjoyable, with some notable standouts.  Mmm.  Oh, and though this has nothing to do with my enjoyment since it happened at the very end of the meal – I saw Matt Dillon when I got up to use the restroom at the end of our meal.  He left a few minutes later, but I rarely ever see (or maybe I just don’t notice?) famous people, so that was kind of cool 🙂
highly recommended