CT & I have been back for from our Panama trip for a little while now and already have a bunch of NYC based posts for you. Rather than let them get “stale,” we are gonna have a couple bonus posts. Enjoy!

After getting back from our wonderful trip in Panama, we were lucky enough to be invited by my parents to another dinner at the James Beard House. This time around was a dinner featuring a vineyard and bistro from Kentucky called Jean Farris. I am sure many of you have never drank wine from Kentucky before and neither had I. Something I learned a while ago, wine is produced in all 50 states. It is just a question of availability/distribution.

After a pretty hot June and July, August has been relatively cool. It was a very nice night so the cocktail hour was held outside in the back garden. There were four different hors d’oeuvres served with a very unique non-sparkling Rosé.

Duck Liver Pâté with Blackberry Gelée. I think this was the one bite that the whole crowd wanted most as they ran out pretty quick. We were able to snag two for CT & Mom who both enjoyed it. Fortunately since my parents are somewhat regulars at James Beard, one of the waiters brought some to our table before dinner started. I thought it was good, but I am not a huge fan of pâté. The blackberry gelée was good at cutting the richness of the pâté. 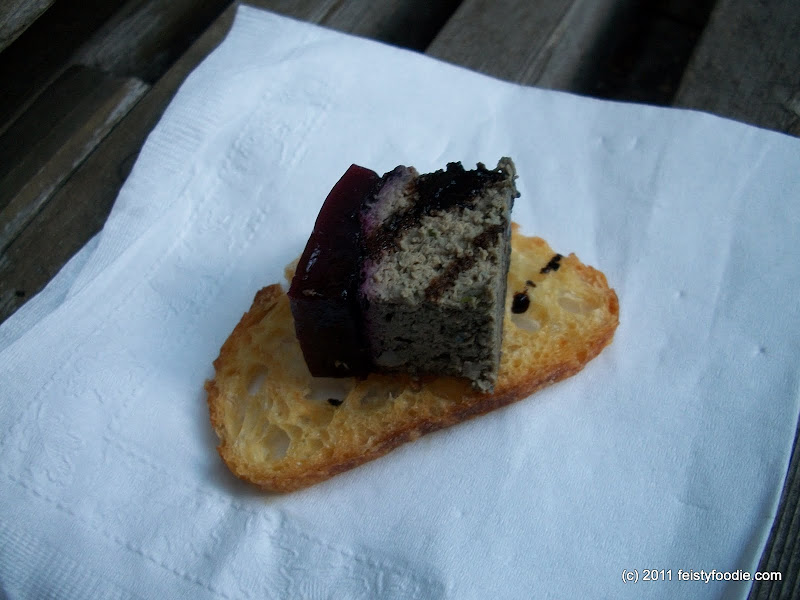 CT said: This was a great starter and the only one I allowed to eat two of! (I’ve finally learned to control my indulgences during the cocktail hour so as not to fill myself before the ever-lasting dinners). Silky smooth pâté and the blackberry gelée paired very nicely without being too sweet and overpowering.

Cured and Lightly Smoked Salmon with Sorghum Mousse. I enjoyed the salmon a lot eventhough it wasn’t better than what you can buy in a specialty foods market. The salty and smoky flavor of the salmon completely negated the flavor of the sorghum. 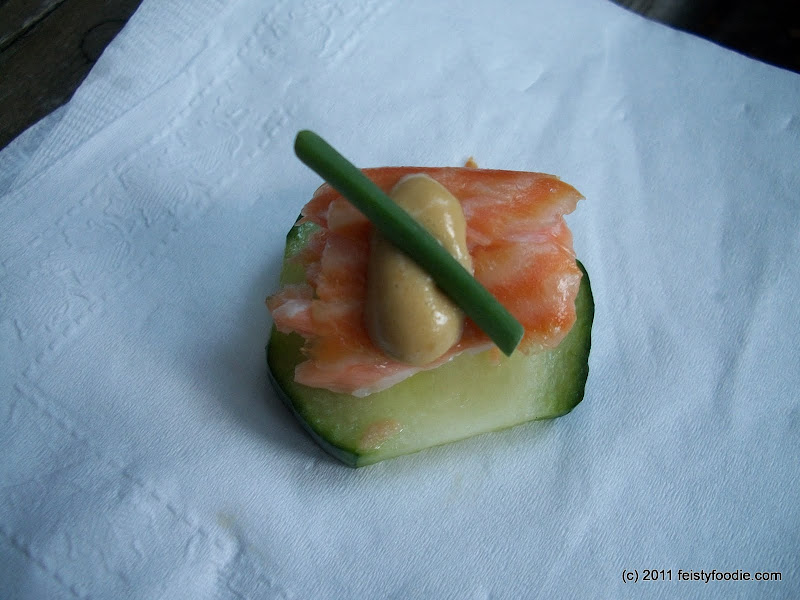 CT says: This was good, but I’m not a huge fan of smoked salmon to begin with so I can’t be a fair judge.

Salt-Roasted Beets with Truffled Goat Cheese and Garden Chives. This was a mouthful of salt. The beets were way too salty. Add in the truffle flavor from the goat cheese and it was pretty terrible. We noticed the waiter really pushing a hard sell on these as most of the other attendees seemed to share our feelings on this bite. 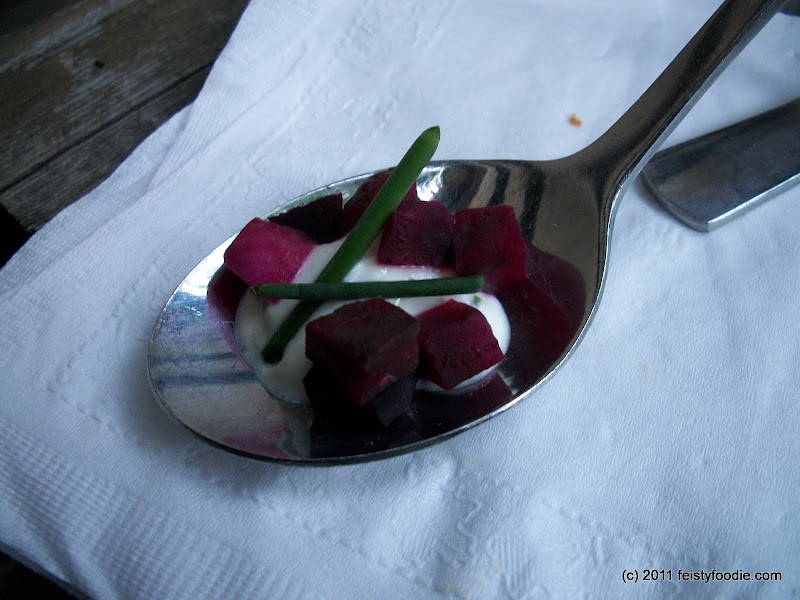 CT says: I’ve never disliked a dish at JBH. I’ve liked some more than other, but never disliked. However, this was truly inedible. WAY too much salt.

Heirloom Melon Salad with Newsom’s Kentucky Prosciutto Crisps. A classic combination. The melon was especially ripe and sweet which was balanced by the salty, crispy prosciutto. 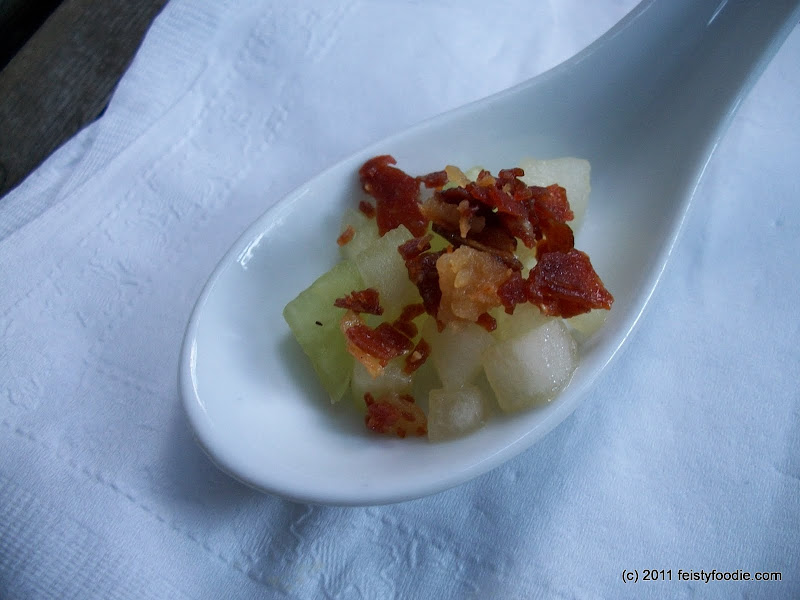 CT says: I liked this second best. The melon was sweet and I enjoyed the crunchiness of the prosciutto. It was like extra delicious bacon.

Bobwhite Quail with Creamy Weisenberger Grits, Estate Apple Chutney, and Boone Creek Creamery Blue Cheese. This was an interesting first course. Unfortunately, the quail got somewhat lost on the plate. All I could taste was the apple and blue cheese. We were also deep in conversation about our trip, so I barely had time to gobble this up before the next course. 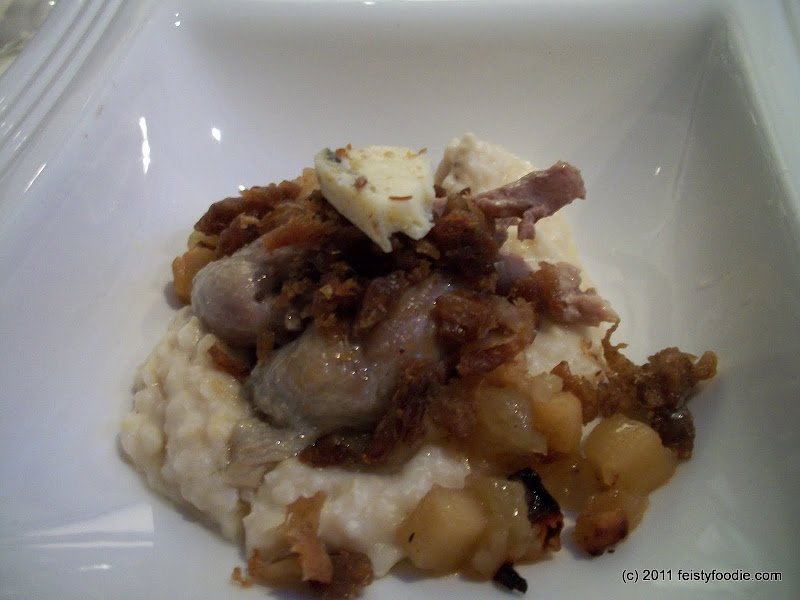 CT says: HA! I let TT do the talking, while I gobbled down my plate. I thought the quail was pretty good – juicy and nice flavored. There was too much grits for my taste, but I did like the almost-cream flavor of them. The apple chutney was a nice semi-sweet, semi-tart addition to the plate too.

Estate Heirloom Tomato Tasting with Housemade Mozzarella and Assorted Salts. This was Summer on a plate. A nice play on a Caprese salad with some amazing tomatoes. I was quite intrigued by the squares of what I called a compressed tomato. While I couldn’t detect a difference in the salts, they were used perfectly to accentuate the flavors of the tomatoes and the cheese. The mozzarella was a little strange with one side basically “burned” into a chip. I could eat this dish again and again. 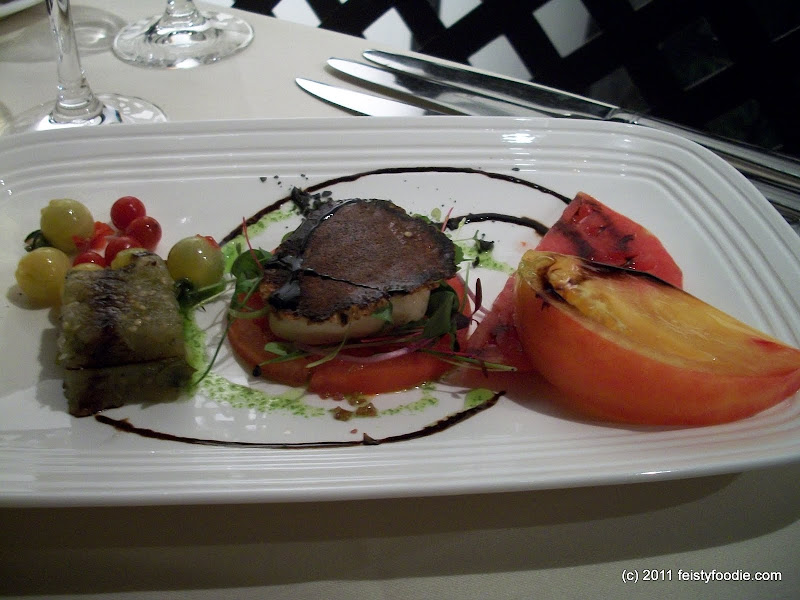 CT says: You may not know this about me, but I absolutely LOVE tomatoes. During the summer, I can eat a carton full of those sweet delicious treats like candy (and I do, repeatedly). Anyways, this dish was made for me will all those yummy tomatoes! Even the compressed tomato jelly-ish thing won my heart. The mozzarella was good too – I liked the “burned” side, but the tomatoes were the star for me.

Kentucky Freshwater Prawns with Mushroom Ragoût and Paddlefish Caviar Beurre Blanc. Now that’s what I call a prawn! It was cooked perfectly and the head had some good innards for sucking. The mushrooms had a ton of umami and paired perfectly with the sweet prawn. The caviar wasn’t very salty, so it didn’t add much to the plate. 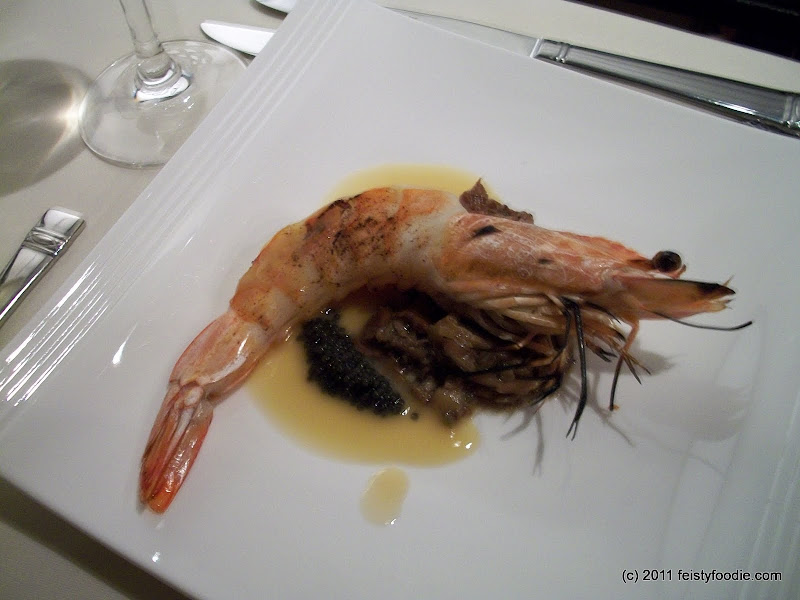 CT says: Another nice offering. I really enjoyed the sweetness of the prawn.

Next, we were given a palate cleanser of some fresh watermelon juice. I believe it had something else in it, but don’t remember. 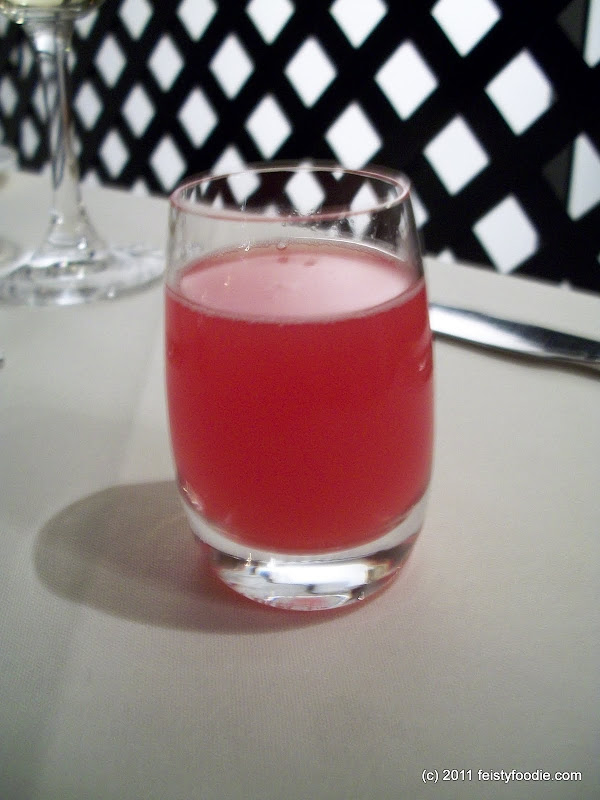 CT says: I really liked! A nice palate cleanser, but also would have works as a cocktail (mixed with vodka!), starter or dessert. Hmm… bringing some good ideas for our next dinner party.

Kentucky Milk-Fed Veal with Root Vegetable Gratin, Collard Greens, Escargot, and Garden Herb Compound Butter. This was excellent. It isn’t often that everything on a plate is cooked perfectly and delicious. The veal was nice and tender. I wouldn’t think that veal and escargot would go together on a plate, but it worked. The escargot were quite large and meaty tasting. The collards were wrapped into a cigar and very tender. Cooking those greens properly is not something easily done. The gratin was a nice mix of sweet potato and I think rutabaga. 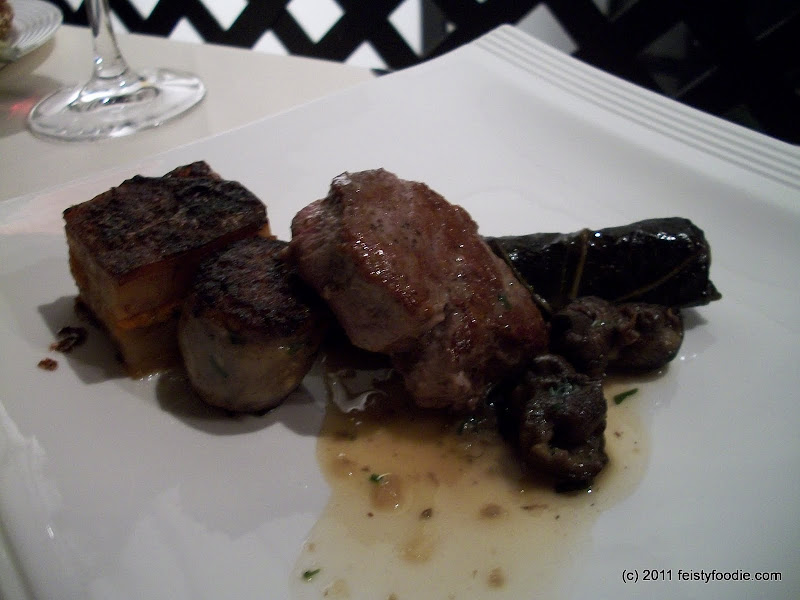 CT says: I agree with TT. Even though I was getting full by this course, I enjoyed all the components of this plate. The veal was so tender and perfect. However, I don’t think I’m a big escargot fan. I’ve had it before, in a more traditional garlic and butter setting, but here they were a little too chewy for my taste. Good, but not my favorite part.

Bourbon Tart with Black Walnuts, Bourbon Whipped Cream, and Chocolate Crispelle. This was an excellent dessert to end the meal. The Chef used a very liberal hand with the bourbon in the whipped cream. Boy was that strong! The tart was nice and crumbly. You know it was a good dessert when my Dad pretty much had a clean plate. Like me, he usually skips dessert. 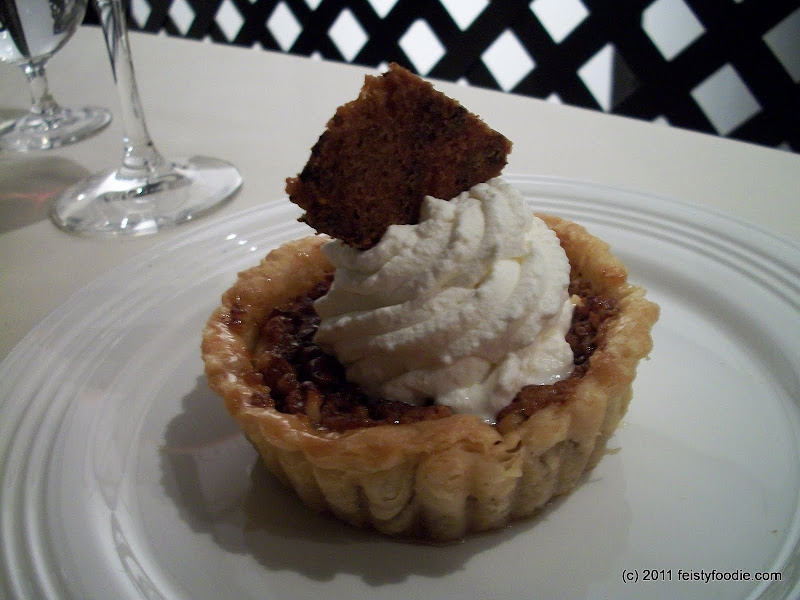 CT says: I didn’t expect to like this, as I’m not a huge nut-fan. However, once I started I couldn’t stop! It was rich and sweet and just delicious.

All in all, it was another nice dinner at the James Beard House. Kentucky red wines were a lot better than their whites. The veal was hands down the best thing we ate that night. Thanks to my parents for inviting us again.