I’ve long joked that I will not write about Parkside until announcing my engagement to BF.  He took me here for our first official date, and it’s long been one of those hidden gem types of places that Queens has in abundance.  I’ll take an awkward moment here to note that I am now posting about Parkside… but BF and I have decided to part ways.  I don’t normally share much of my personal life on here – especially regarding BF (beyond his food tastes) – so I ask that you respect my request for privacy.  Just know that from here on out, he will be referred to by exBF as necessary, though I don’t anticipate his appearance here with any frequency.  And please, please, please: save your condolences for funerals. 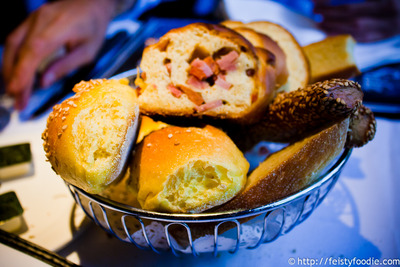 I’ve been here many times through the years, as exBF really enjoys this place and it’s close to where my mother lives.  We’ve taken many people to dine here, showing them what has easily been our favorite Italian restaurant since forever (though he was going there since way before we ever met).  It was fitting, then, that not only our first date was here, but our last official date: celebrating our 8 year anniversary.  Though we had reservations, we were made to wait a bit before being ushered upstairs.  I am pretty sure upstairs was filled with novice servers being trained, because our service was very awkward throughout the whole night.  Above: the breadbasket, filled with yummy goodies as usual. 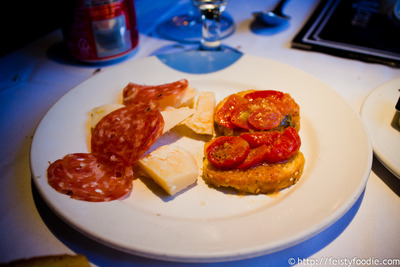 A few minutes after we ordered, a small plate bearing two pieces of bruschetta (tasty), salami, and some hard Italian cheese landed on our table.  A very nice nibble to whet our appetites for what was to come. 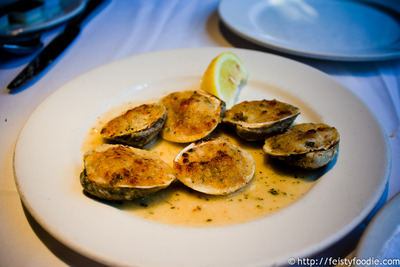 An order of baked clams, split 4/2 because exBF loves baked clams.  Unfortunately, his fourth clam – what would have been my third – turned out to be fishy, and not very good at all.  The other clams were perfect however, so it was dismissed as a fluke. 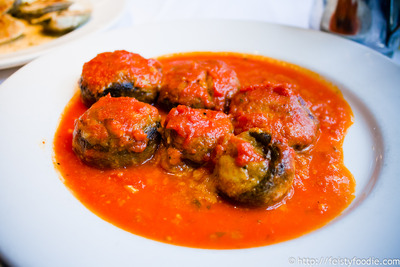 Veering off our normal course of events, exBF offered to order the stuffed mushrooms as an appetizer.  These were really good – stuffed with cheese and breadcrumbs, a lot of flavor and just a little sweetness from the tomato sauce… yum. 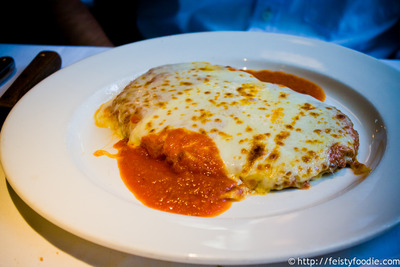 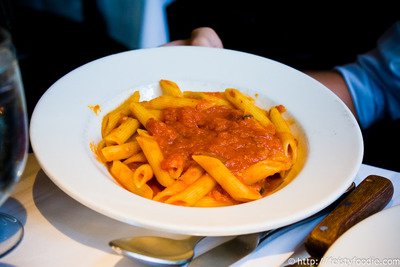 The side of penne that he requested and received with the chicken parm; very standard. 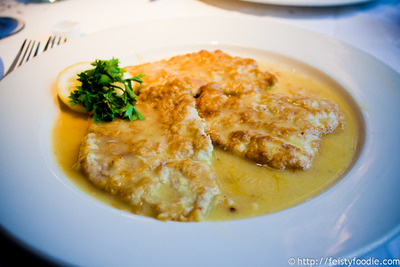 I went with veal francese; I love this dish.  Lemony, bright, creamy… I could drink the sauce, which I probably shouldn’t.  Um, so I don’t.  Thinly pounded pieces of super tender veal that I cut with the side of my fork… so good! 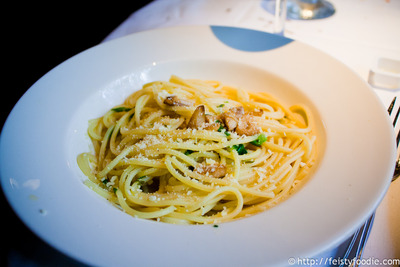 I got plain spaghetti with garlic & oil on it, so I could spoon the sauce from my veal francese over it and enjoy it that way.  Again: so, so good. 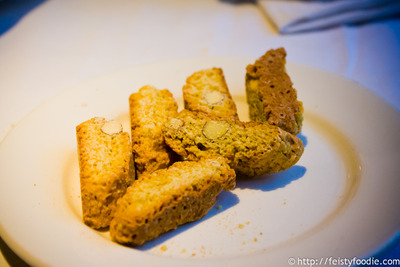 Dessert time: first a plate of biscotti landed on our table.  After a bit of munching (they were good), we browsed the dessert menu and picked out two desserts. 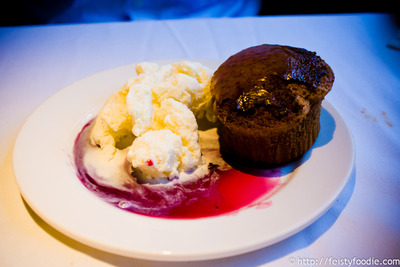 A chocolate lava cake for exBF, who loves that sort of thing, and a honey panna cotta for me, because that’s my favorite dessert ever.  So… where’s my panna cotta?  Well, after we ordered, the waiter hurried over with the above plate, dropped it, and then turned to me, apologized, and said “We ran out of panna cotta…” and scurried off.  I was pretty annoyed because he should have told us before serving this dessert – exBF would have definitely decided against it, and we could have walked over to Lemon Ice King for a nice post-dinner ice.  In any case, the lava cake was cooked completely through and became more like a chocolate muffin.  exBF wasn’t all that thrilled with it.  It was not very sweet (he’s got a sweet tooth), and it sort of left a less than pleasant taste in his mouth (figuratively).

Yvo says: Overall, I liked the meal, though exBF definitely got the worse side of everything.  The service issues annoyed me a bit (being ignored, water glasses not being refilled often), but the food was good.  Has it gone down since the first time I went?  Yes.  But that happens to many places over time.  Thanks for the memories over eight years; we had good meals, we had not-so-good meals, and some were even great.  That doesn’t make Parkside less than a great place to go eat… just that it’s no longer the place for me to visit.
highly recommended