Honestly, I have to count my blessings every day because I have the bestest friends in the world.  Case in point: I saw a BlackBoard Eats deal for The Tea Set a few months ago – not your normal percentage off the total price free-code, but a Groupon-esque like deal that you purchased basically a gift certificate for half its value – and passed it along to Beer Boor, saying simply, “We should have tea!” (or something equally inane).  Being the very generous friend he is, Beer Boor purchased the deal, and… we didn’t go. 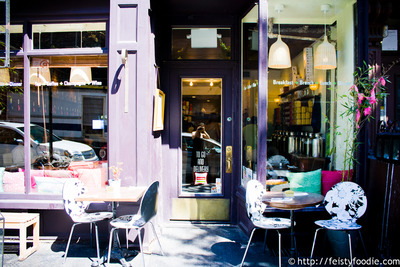 Literal months passed by before he said, “Hey, about tea, it’s about to expire.  Do you have time to go soon?” and after a lot of back & forth about when it could be used, we decided to meet up very early one Friday morning for breakfast (yes, I dragged my butt into the city very early- I was even actually early, not just on time, but early!) before he had to catch a bus to go visit MaW for her birthday (happy [belated] birthday, MaW!).  The front of The Tea Set, offset from the avenue, is pretty unassuming and signless.  I only knew this was the place because I walked by months earlier and paused to figure out what it was. 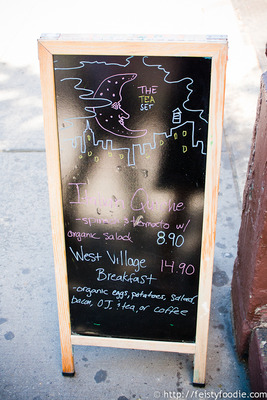 This small sign out front helps a little bit too. 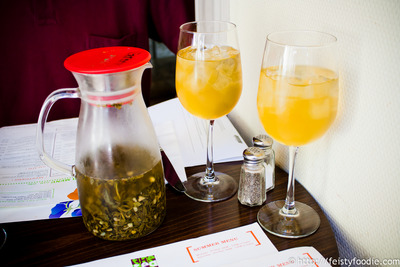 After some browsing of the menu and a bit of back & forth, I let Beer Boor choose the tea.  He wanted iced tea, and ordered a pitcher of the Forever Green, I believe (speak up if I’m wrong!).  Refreshing, slightly bitter, just about everything I’d expect from green tea.  Our server was really nice, though she committed one of the egregious server-sins that irks me to no end (that doesn’t affect tip): hovering.  She appeared constantly and kept repeating these very bland phrases like “mm-hmm! okay!” – though she was otherwise very pleasant.  I think it was just too early for me to deal with other people. 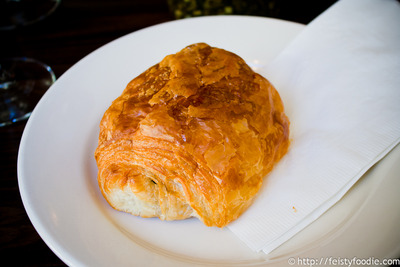 Our first choice was the chocolate croissant. 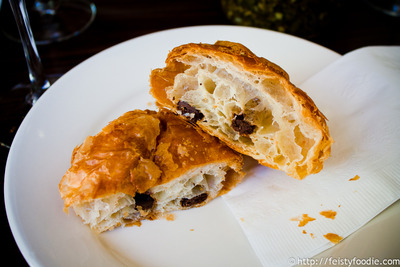 While that doesn’t look like a lot of chocolate, it was actually the perfect amount.  Admittedly, I was skeptical because my pain au chocolat experience is next to none, but … if this is what they are supposed to taste like, I might start getting my own.  The rich, buttery flakiness of the croissant was perfect, coupled with a little hint of sweetness from the chocolate – creamy as it melted with each thoughtful chew – just fantastic. 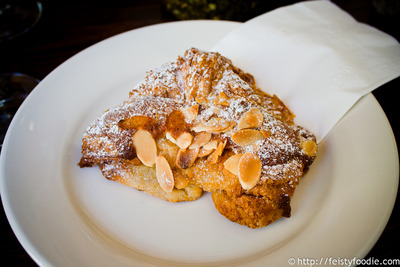 When I noticed the types of croissants and mused, “Why can’t there be a chocolate AND almond croissant?” Beer Boor responded “Why don’t we order both?”  Just one more reason why I eat with him so often: indulgence, and overindulgence, is always encouraged. 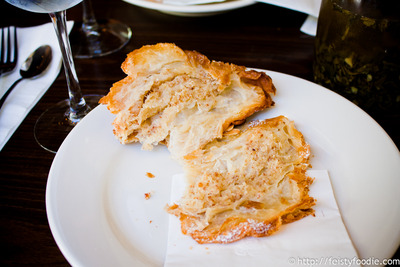 I found this croissant to be different but just as fantastic, and when I accidentally split it, I noticed there is a “filling” of sorts (a smear of a bit of sugar and perhaps ground almonds? – not sure).  The crunch of the sliced almonds on top, which I’d thought to be more decorative and indicative of this being an almond croissant, actually gave such great crunch that I couldn’t imagine not having them there.  The almond taste was subtle, and this croissant was not as sweet- love, love, love. 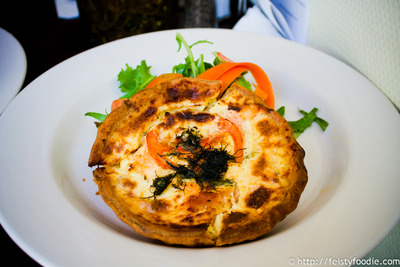 We ordered a lot of stuff to share: first up, the most ‘interesting’ quiche on the menu, or the salmon with dill and tomato.  The dill, as you can see, is bunched up and really black on top – I thought it looked like seaweed, haha.  But spread out and eaten with the quiche, not bad.  Unfortunately, overall, the quiche was only alright.  The salmon was slightly fishy, which had been a concern of both of ours, and made the dish just tolerable as opposed to enjoyable.  I would not order this again. 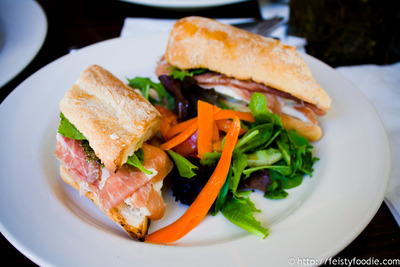 Onwards to the two sandwiches we split!  First up, a classic sandwich: the prosciutto mozzarella. 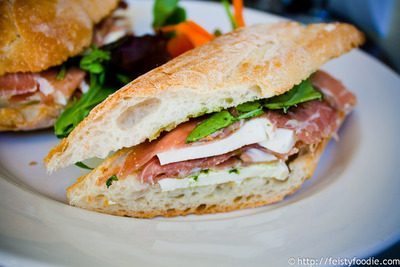 I wound up eating this much later (took my half home), but Beer Boor really enjoyed his half. 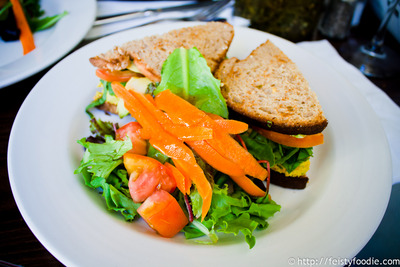 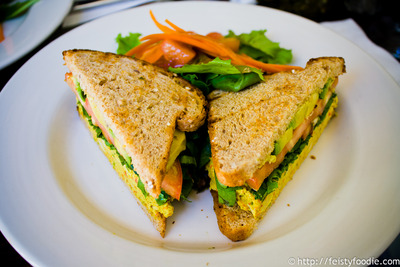 The other sandwich – ‘curry sandwich in 9 grains toast’ – is something I’ve had in miniature during tea time many times, and have enjoyed.  Since we’d opted out of getting the tea service, instead ordering off the menu whatever we liked, I decided to give this a go in large form. 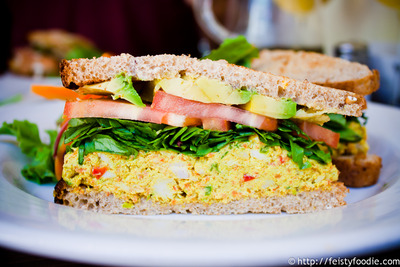 This was actually the sandwich I started with, since it looked more interesting than the other one.  I really enjoyed it; it wasn’t overwhelmingly curry-flavored, but had a creamy texture, then the tomatoes, avocado, and the grainy/roughness of the bread really went well together.  I thought this was very tasty! though Beer Boor, when asked, said that he preferred the prosciutto mozzarella for how clean-tasting that sandwich was.  I don’t think that was a ding on this sandwich, just a matter of preference.

Thanks again for the lovely breakfast, Beer Boor!

Yvo says: A lovely experience at a small tea shop early on a Friday morning – I don’t know how crowded it gets, but it was 1/4 full the whole time we were there (it’s a pretty small place).  Service was pleasant, and we got to sit by the windows, which was nice.  I enjoyed our meal, and though the price is pretty steep (for some items), you could say it’s justified by the fact that as much as possible here is organic (just about everything).  I could see myself returning if I were in the area and in the mood for this type of light fare.
recommended