To wrap up the fantastic birthday meals we had at Jean-Georges and Marea, my parents invited us along with Aunt B out for dinner. Since they usually come to me for recommendations in the area, I suggested ilili. CT and I went for brunch a couple of months ago and have been meaning to return for dinner. I believe her parents have eaten there a number of times and their approval of any restaurant is good enough for me. (Yes, I know how to kiss up to the GF’s parents.)

The restaurant normally has a $42 prix fixe dinner Sunday through Wednesday. It comes with two appetizers, entree, and dessert. Due to unforeseen circumstances, we had to push dinner back a week. This caused dinner to fall during Winter Restaurant Week, so the same prix fixe menu became $35, score!

After being seated and given our menus, we were each given a small glass of Arak. I never had this before. It is a clear Middle Eastern apertif used as a palate cleanser traditionally served with ice and water. It becomes cloudy once mixed with the water. The waiter suggested we drink it throughout the meal to cleanse the palate and aid in digestion. I would never order this because of its strong licorice flavor, but in the spirit of being festive I drank it anyway. 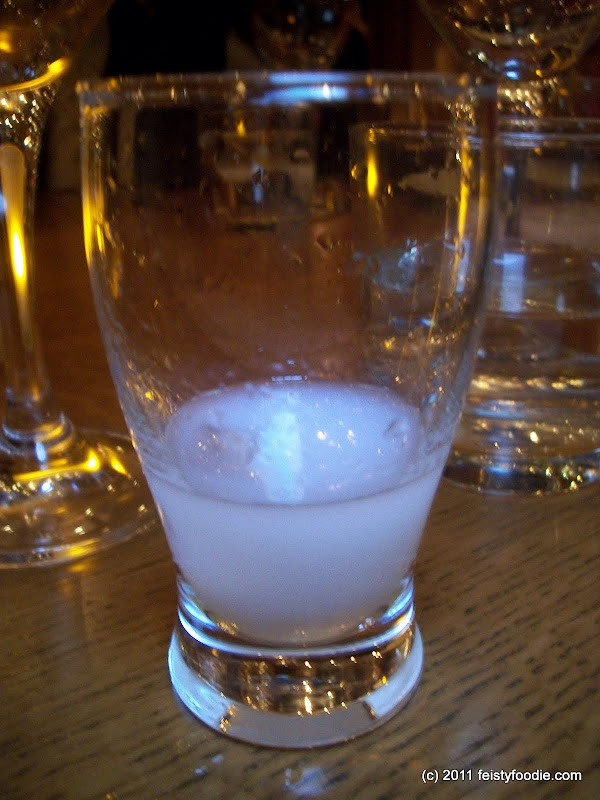 The Restaurant Week menu had a large number of options, which was a big plus. I am no longer a fan of RW since many places offer an extremely limited menu in order to turn and burn the tables quickly. A multi-course meal for cheap that isn’t appetizing is no deal at all.

All of the appetizers came out super quick. There was a lot of table turnover, even on a Sunday night, so the name of the game for them was speed. Everyone was also served a hot and fluffy pita along with their appetizers.

CT’s first was the Bone Marrow with sour cherry tabbouleh and pita pillows. This could have been an entree portion with its two huge bones. I don’t even think CT was able to finish the dish. The tabbouleh was fantastic. The roughage cut through the richness of the marrow nicely. The mini pitas were a good base to build a little marrow sandwich. 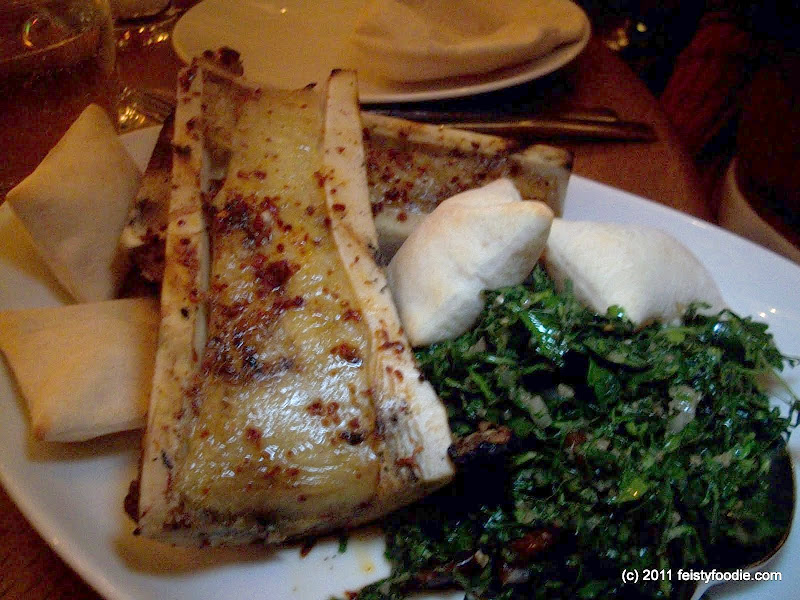 CT says: I agree with everything TT said. The bone marrow was cooked nicely and the presentation was great; but it was just too much of such a rich food. I was only able to finish the first one. The tabbouleh was really refreshing and was a perfect accompaniment for it. It tasted really delicious all wrapped together in the fresh pitas. However, this was definitely an appetizer to share with 2-4 people.

Her second appetizer was the Veal Sweetbreads in a lettuce cup with garlic whip and kabiss. There were three of these cups on a very long plate, hence only a picture of one. I had one and enjoyed it. Deep fried, what’s not to like? 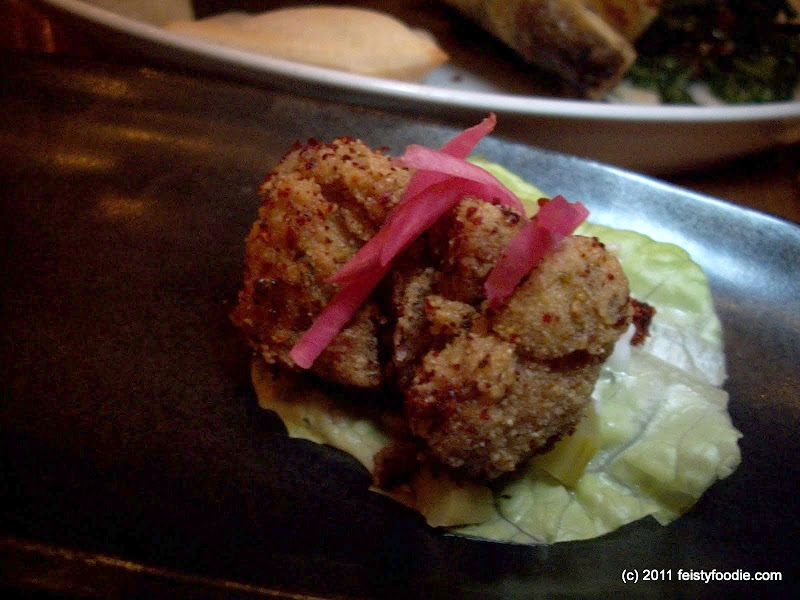 CT said: This was a much more manageable and appropriate sized appetizer and very delicious. Just crispy enough, not greasy, and a great small bite.

The most popular choice for the table was Marinated Octopus & Calamari Salad with carrot tahini, sweet pickled cucumber and nigella. I believe my Mom & Dad both ordered this as well. It was good. I didn’t get much “Lebanese” flavor out of it, but it was a very nice salad containing some of my favorite ocean dwelling creatures. 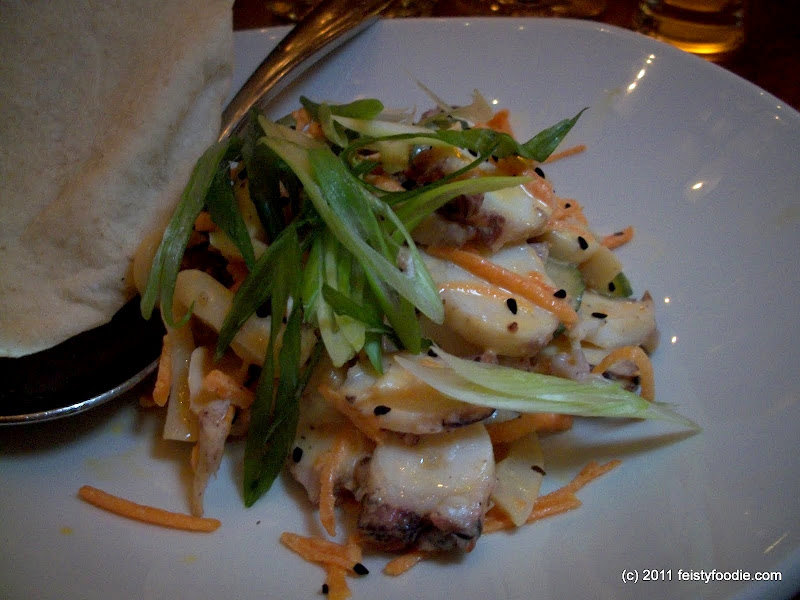 My second dish was Harissa & Amontillado Shrimp with tomato, toasted almond and parsley. This came out served in a sizzling cast iron pan. The shrimp were perfectly cooked and flavored. I was quite happy with this dish. The tomatoes were slightly warmed from sitting in the hot pan which brought out their flavor in this off season for them. The almonds gave a good overall crunch and nuttiness. 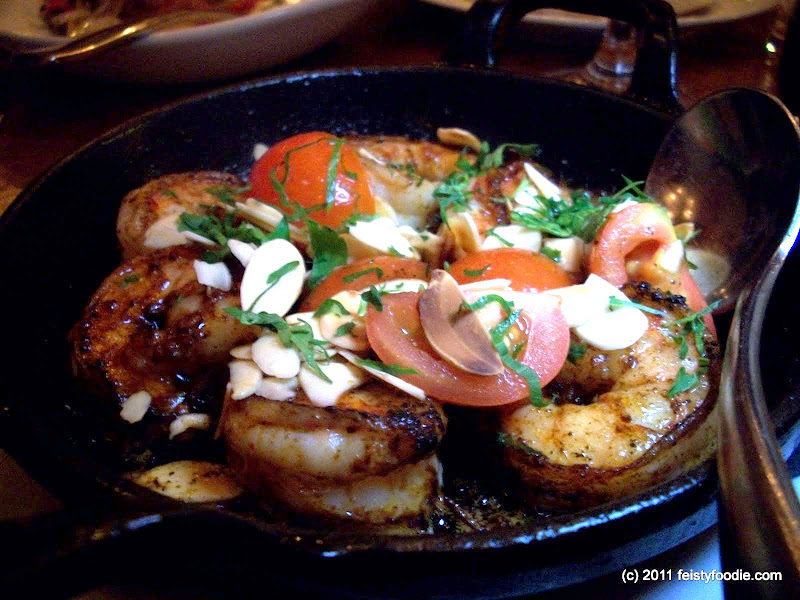 Almost as soon as all the plates were cleared, the entrees came out. I think we were all relieved to see that these portions were on the smaller side considering the amount of food we all just ate.

CT ordered the group favorite entree of Date Braised Beef with cashew “couscous,” cucumber and rose petals. This was really good. A lot more tender and flavorful than the short rib I got at Tree. 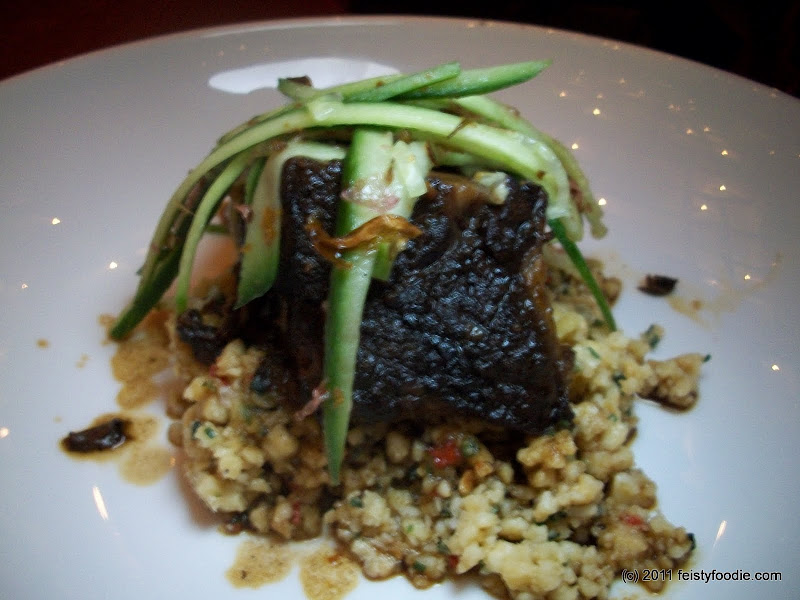 CT says: This was a great dish, not too heavy and a perfect sized-portion (I was still recovering from the size of the bone marrow dish). The short rib was very tender and the crunch of the cashew “cous cous” added a nice texture to the dish. I’m not a huge nut person, but I liked the flavor it added. I would be happy to eat this again.

I was in the mood for lamb so for a supplemental $7, I ordered the Lamb Chops (2 chops) seared with za’atar salsa verde. The chops were small-not that I was looking for a huge portion-but still seasoned and cooked nicely. There was a bit too much fat on them though. I guess spending the extra money on this didn’t pay off this time around, then again I wasn’t paying. 🙂 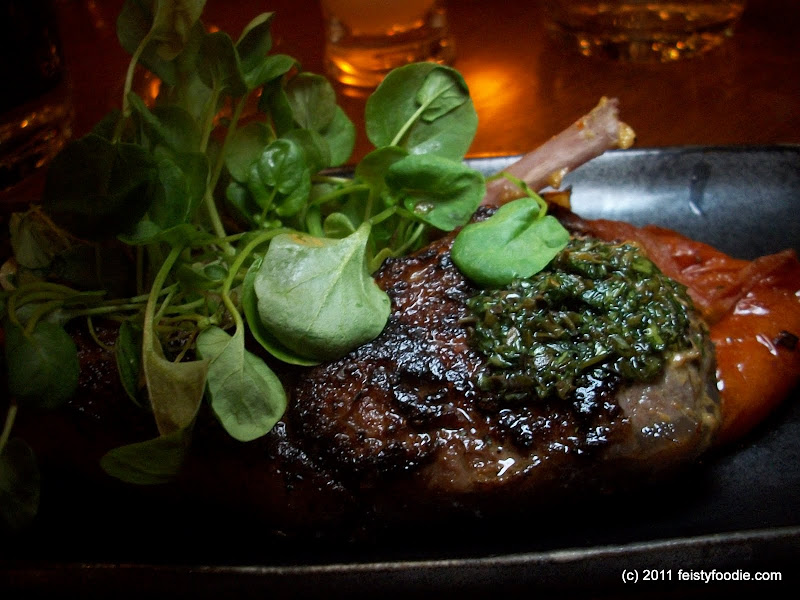 When it came time for dessert, I was frankly shocked when CT passed on ordering the ilili Candy Bar (chocolate kataifi crunch, chocolate ganache, pistachio and fig caramel and finished tableside with warm chocolate sauce). Maybe she figured since Mom and Aunt B ordered it, she would be able to have a taste of theirs and try something different? I had a rich, decadent bite. The waiter was not blowing smoke when he highly recommended this. 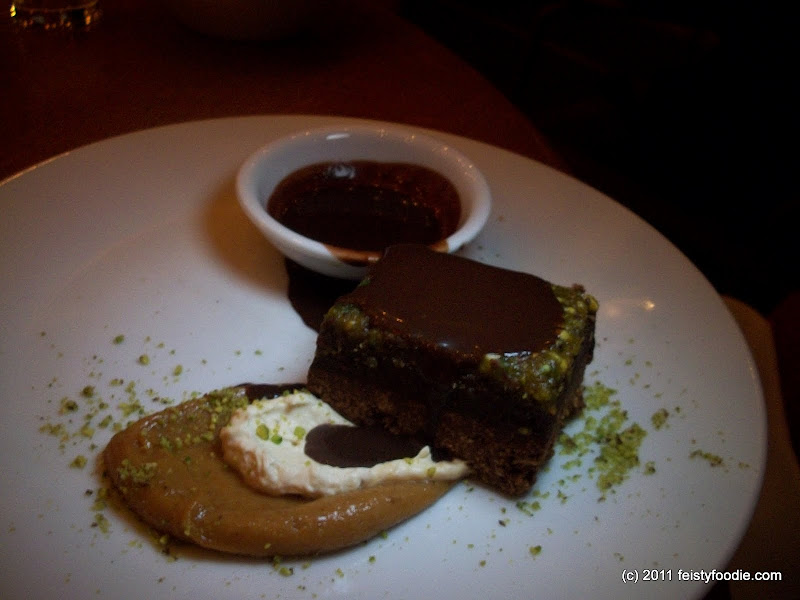 Instead, CT ordered the Awaimat (Lebanese beignet with orange blossom simple syrup). I had half of one. It was quite gooey inside. I am not sure if that is how they were supposed to be or if they were undercooked. Otherwise, a bit too sweet for me with the simple syrup. 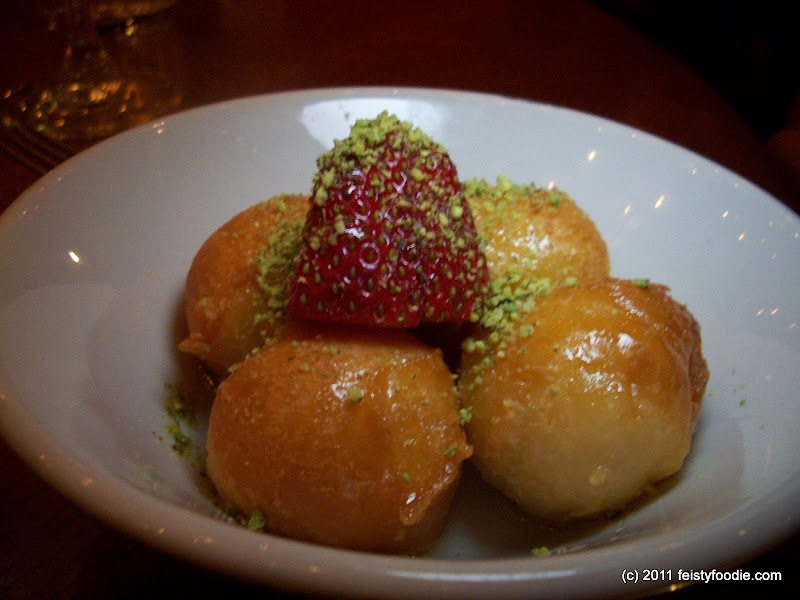 CT says: I really liked the beignets – they were like mini-doughnuts, so what’s not to like? I didn’t think they were too gooey inside. However, the syrup was a little too sweet for me too. It was ok at first and I liked the orange-y flavor, but after the beignets soaked up more of the syrup, it became a bit too intense. I wished they served the syrup on the side so I could’ve dipped into it instead.

I decided on the Ashta (traditional Lebanese clotted cream with orange blossom simple syrup and bananas). This just sounded really unique and interesting to me (and apparently to my Dad too). I am glad I ordered this. The cream was rich and creamy, but light at the same time. Yes, I just used the same word to describe itself. The same syrup that was on CT’s beignets was not as overpowering. The bananas didn’t really add much. 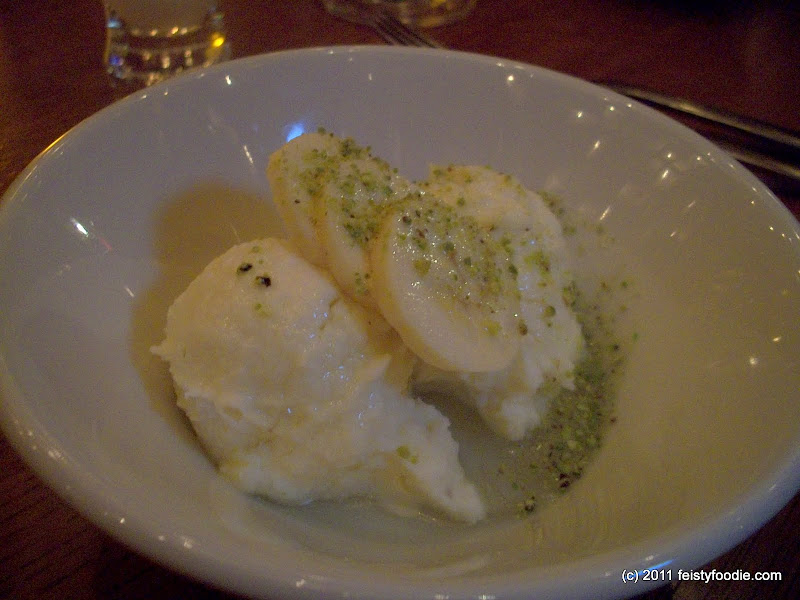 All in all, this was a fantastic way to end CT’s birthday celebrations for this year. It was super reasonable at $42 and a bargain at $35. ilili is a bit of a hidden gem on Fifth Avenue in the Flatiron District. It doesn’t get much press although it puts out a tasty and unique product. I would definitely recommend stopping in even if it’s only for some drinks and appetizers.