For CT’s first weekend back after returning from her AMAZING trip to South Africa over the holidays, she suggested date night after work on Friday. I decided this was a good opportunity to check out one of the Blackboard Eats restaurants. One that piqued my interest was Tree in the East Village. It is a small storefront bistro with a large garden area in the back. Although I wasn’t sure how useful the garden seating would be in January.

After arriving, we were immediately greeted by the fact the restaurant is small! This is not unexpected in the East Village as most restaurants there are tiny. The host walked us through the restaurant towards the back and ended up seating us in the back garden. It was tented and they had some space heaters, but it was still quite cold there. After a little while, we moved back inside where there was one table open.

CT says: I was impressed that they noticed we were cold in the garden and moved us back inside without our needing to ask.

We weren’t super hungry, so we decided to share an appetizer. Grilled flatbread – oven baked flatbread with blue cheese, roast pears, spiced candied walnuts, & arugula leaf ($10). This was HUGE! It was more than enough for two people to share. I really liked the layers of different flavors. It started off super peppery from fresh pepper and arugula, then ended creamy and sweet from the pears and cheese. A couple of the walnuts fell off while eating the flatbread, but afterwards, on their own, they had a good amount of spice to them. The spice was toned down a lot when eaten with the other ingredients together, so I am glad I tasted it on its own. 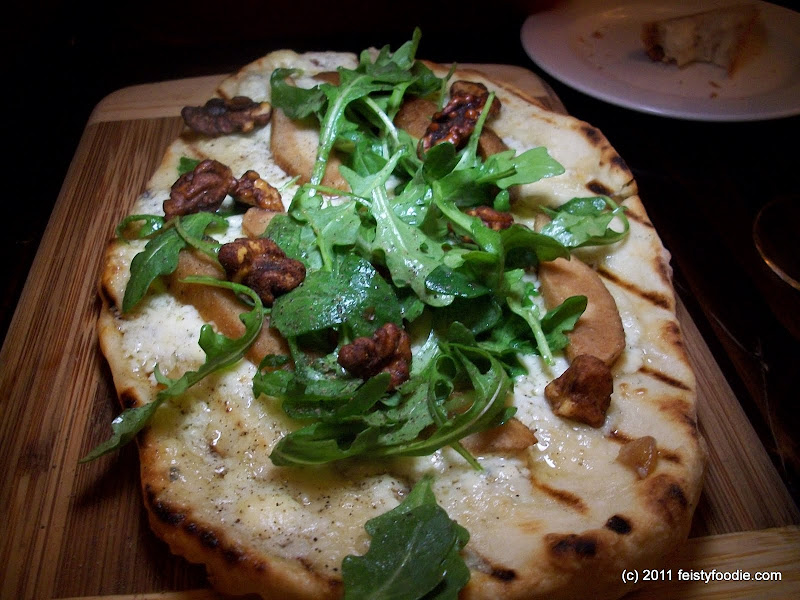 CT says: This was a perfect starter for two. Not too filling, but delicious. All the flavors and textures all balanced quite nicely.

CT chose the pork chops as her main. Grilled pork chops with spaetzle pasta dumplings, roasted apples, julianne spinach, & maple dijon jus ($22). She was only served one pork chop though, but it was HUGE. Definitely, one of the largest pork chops I have ever seen. The bite I had was a bit too chewy for me, but the flavor was nice. 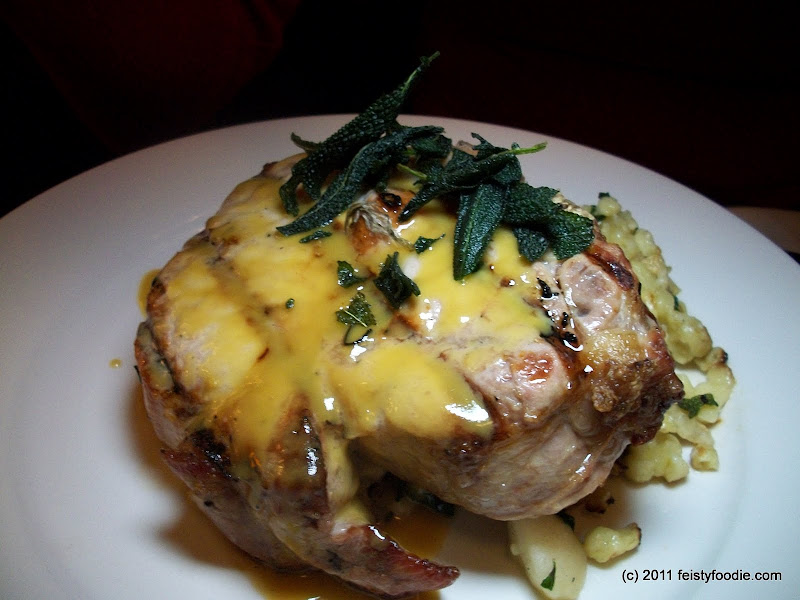 CT says: I was surprised when the waitress asked how I wanted it done – it seemed an unusual question for pork. I asked for medium, thinking it would be a safe bet. Unfortunately, the closer to the bone I got, the more I realized that it was undercooked. (However, given the size, I didn’t get come to that realization until the next afternoon when I went to make a pork sandwich). The flavor was pretty fantastic with the roasted apple and maple dijon jus – it gave it a slightly sweet-tangy taste. The spaetzle pasta dumpling was also a nice addition to the plate as it provided a little carb/starch to balance the gigantic portion of meat, but without feeling too heavy. I didn’t see any spinach besides the few pieces on top. Overall the dish would have been a complete success except for the undercooked meat. Next time, I’ll ask for well done.

I went with the braised short ribs – tender boneless beef ribs, served with pommes puree, seasonal roasted vegetables, & shallot crisps ($24). This was also quite a large portion. The meat leaned towards bland side and definitely wasn’t fork-tender as braised short ribs usually should be. The veggies were very good. Cooked al dente and seasoned well. Overall, the dish was good, but I would most likely try something else on a return visit. 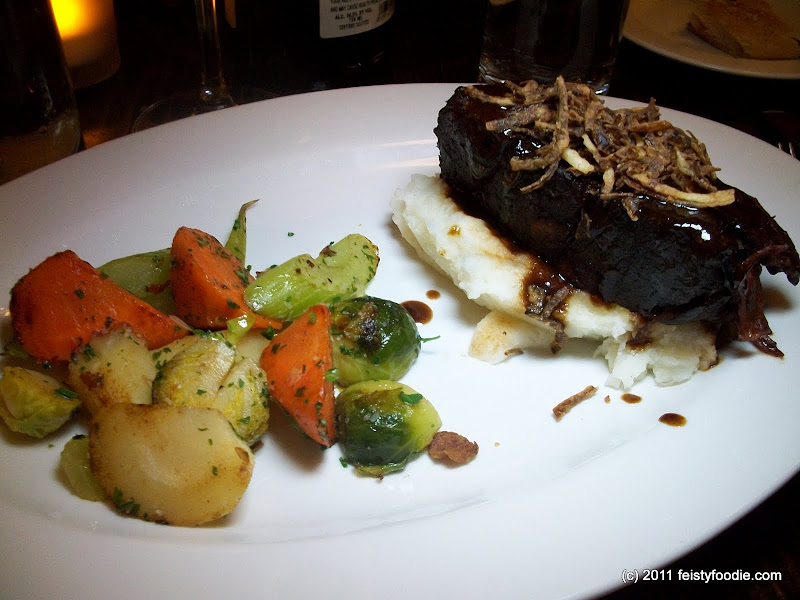 We skipped on dessert since the portions were so huge.

All in all, Tree is a great restaurant for “date night.” It is small and cozy with nice decor. Prices are very reasonable especially when considering the portion size. The wine list was nice and priced appropriately. Having a 30% coupon from Blackboard Eats made the experience that much better. I would definitely be interested in returning during the warmer months to sit out back and try some other menu items.