After our fantastic meal the night before at Jean-Georges, we met up with CT’s family to continue the birthday celebration. This time we only went to a two Michelin starred restaurant, Marea. 😉 Yvo went a couple months back during her birthday celebration week, but back then it only had one star. 5 Michelin Stars in 24 hours, does that make us gluttons?

CT says: No, it just makes us really lucky people!

Marea also has a three course plus dessert prix fixe, but only for $89. Cheap compared to JG! CT’s Dad, TL, and I opted for the prix fixe. CT & ML decided to make their own since they preferred to try more crudos and have a pasta without a fish or meat course.

After ordering, we were presented with an amuse of squash soup. 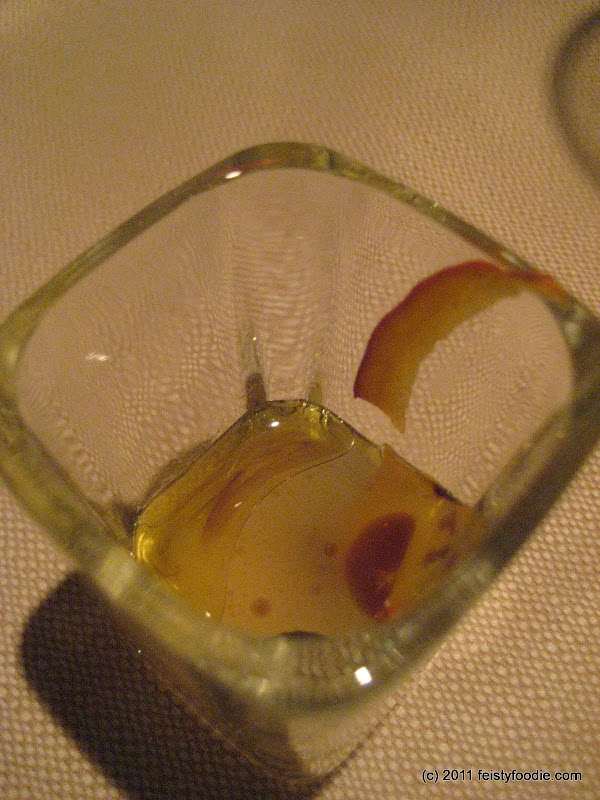 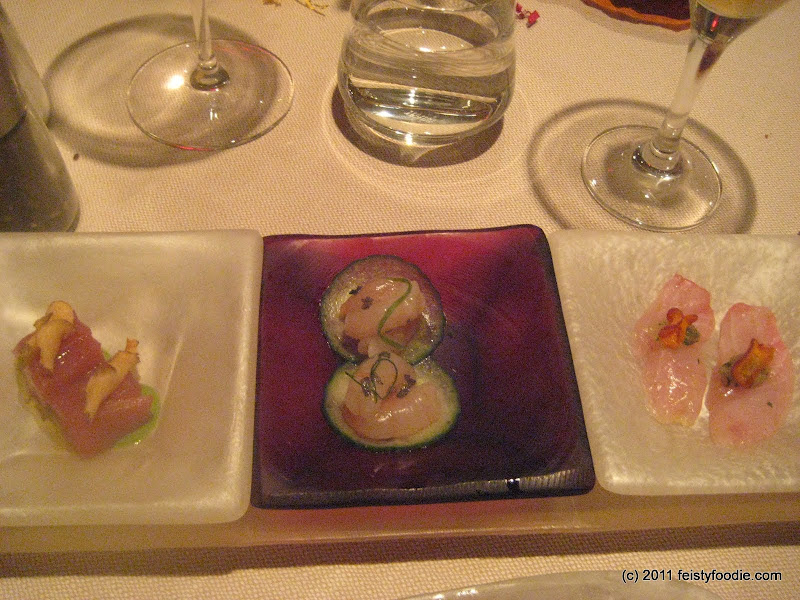 CT says: All three were fantastic! Each had a great mix of flavors and the fish was super fresh! The tuna and snapper had a small bite of crunch to mix with the fish, which added nice texture. The prawn was super sweet but paired well with the cucumber it sat on with a touch of lemon acidity. The waitress was great at helping me select which to get. I picked the tuna and mackerel and she suggested the spot prawn. All were winners.

I had a taste of the prawns and tuna and they were delicious. Super fresh.

Her Dad got oysters to start, so she decided to order one oyster herself. 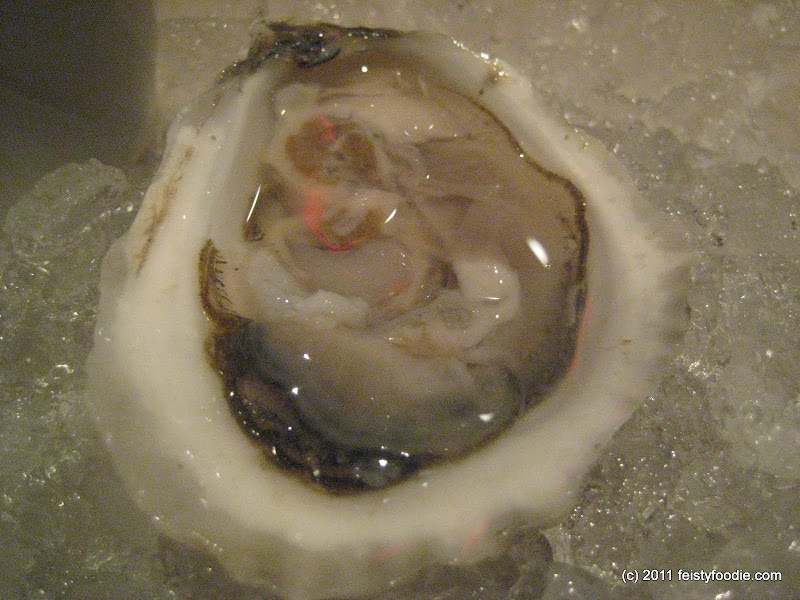 CT says: It’s my birthday, so why not?! This was also fresh and perfect with just a few drops of fresh lemon juice.

I started with a crudo of polipo(octopus), chili oil, lemon and parsley. If you don’t already know from previous posts, I love octopus! Most restaurants served it cooked in one form or another. Even Japanese places still steam or boil the octopus in sushi rolls. This octopus was truly raw. A bit more chewy than other preparations, but I like that. The chili oil was strong. It doesn’t look like there was a lot on there, but after chewing a bit the heat comes in full force. Even CT remarked that it was hot and she has such a higher tolerance than I do. The heat was there, but not overwhelming enough to make me not finish the dish. 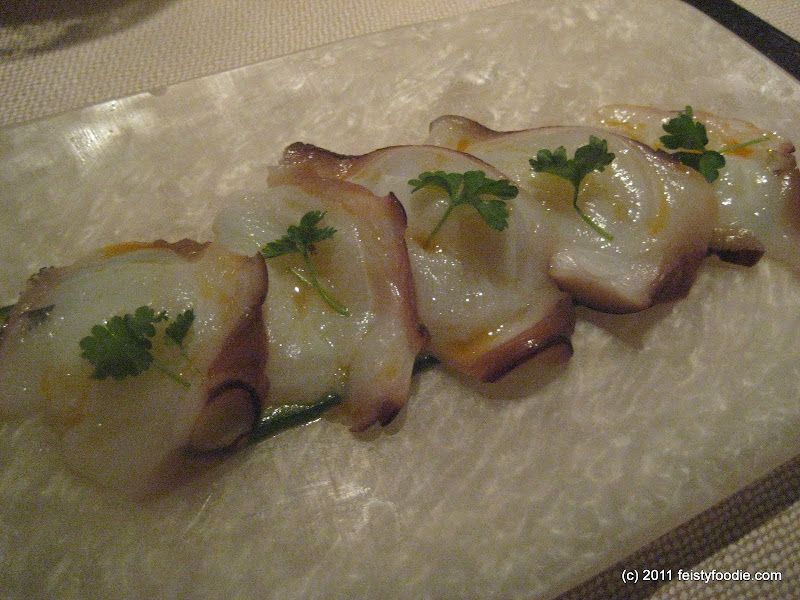 We also order some dishes for the table to share.

One of the signature dishes here is the Ricci, sea urchin on crostini with lardo and sea salt melted on top. This is probably the most indulgent crostini ever! Yes, CT had enough sea urchin last night to kill a small child, but she was really looking forward to this(as was I). Unfortunately, the lardo completely overwhelmed the uni. What a disappointment! 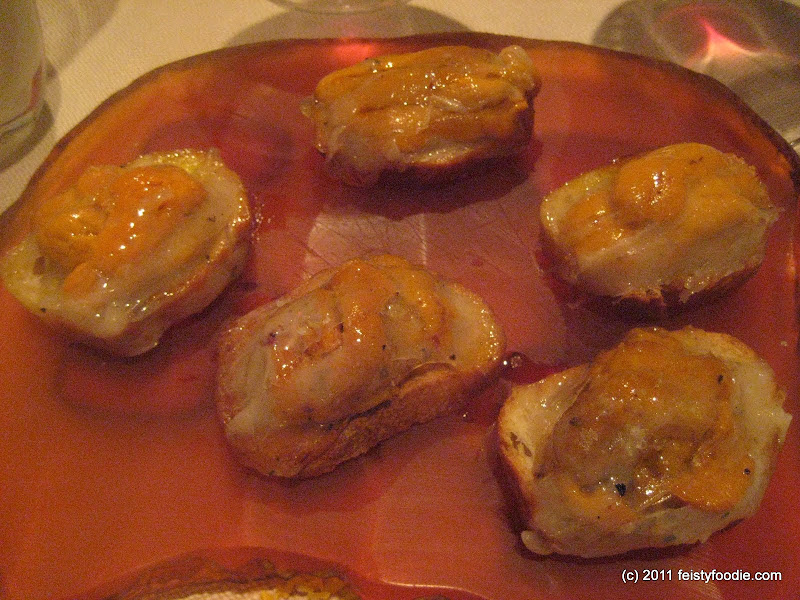 CT says: Agreed. It wasn’t bad, but definitely disappointing. Given how amazingly fresh and delicious all the seafood had been so far, I was really looking forward to the fresh uni. But I still ate my portion and then some…

CT’s Dad also suggested we also get the Sardina- house marinated sardines and arugula. These were good and 100x better than anything you get out of the can. 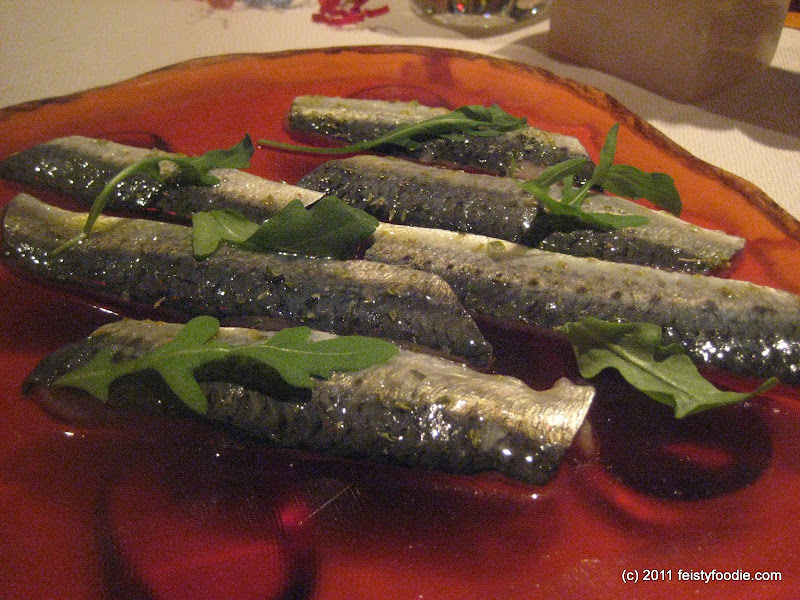 CT says: Surprise of the night for me. I really enjoyed these! They didn’t have the fishy smell or taste I expected.

Next for CT was the Astice- Nova Scotia lobster, burrata, eggplant al funghetto and basil. Cheese and seafood? Not a traditional combination in any sense, but it really worked here. The lobster was sweet and tender while the cheese was nice and creamy. 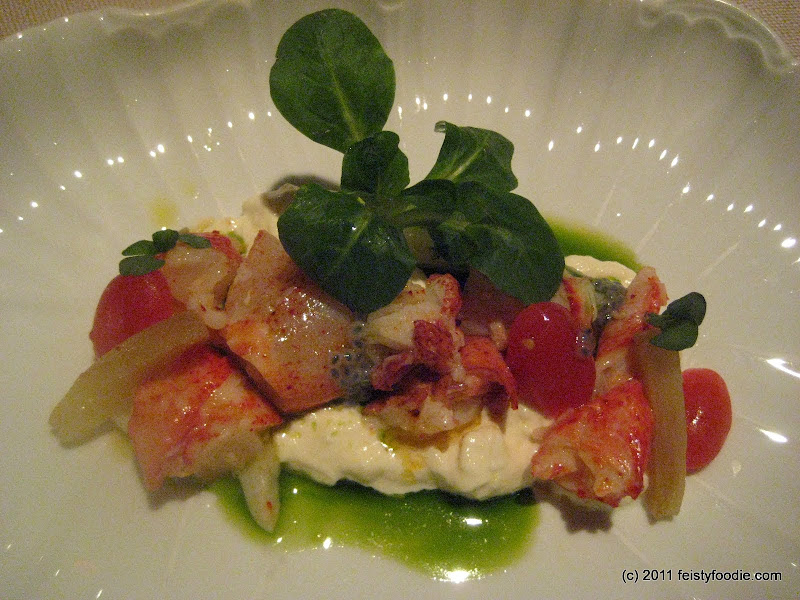 CT says: Definitely an unexpected combination, but it was heavenly. The lobster was really sweet and perfectly cooked. The light and creaminess of the cheese with a little fresh basil… it all just worked. I was also really glad I ordered two light starters and a pasta as I was already getting full at this point.

My second course was the Spaghetti- crab, Santa Barbara sea urchin and basil. The portion was small, but ended up being the perfect size. It was hard to distinguish individual flavors, but it was still delicious. I am glad this signature dish of Chef Michael White came through on the execution. Perfectly cooked pasta and yummy flavors make TT a happy boy! 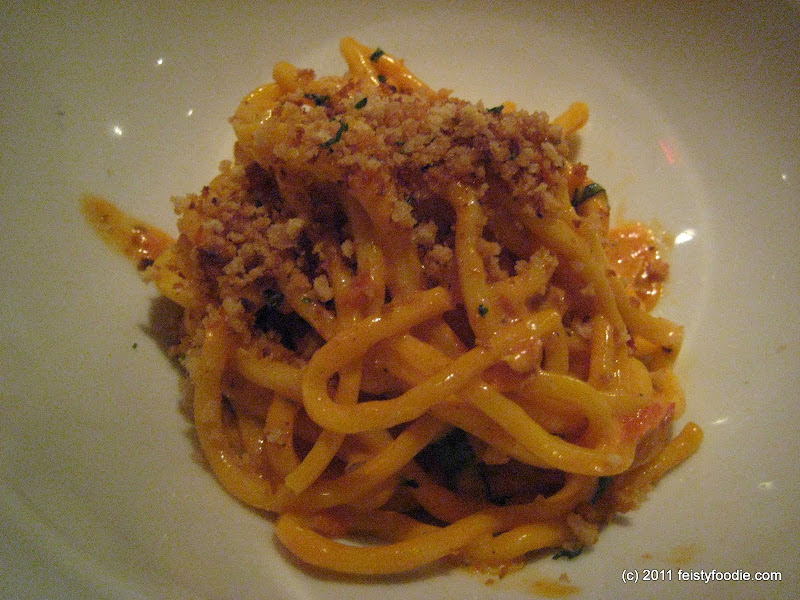 CT says: I tried of bit of this and it was much better than the sea urchin starter. Even though it was mixed in with the pasta, you could still taste the urchin flavor. I would definitely go back to get this dish for myself.

We tried a couple different wines during the meal. After we were given fresh glasses when a new bottle was on the way, little white stickers were placed on the fresh glasses. This was to let us know which wine was from the new bottle in case someone wasn’t finished with their glass of the old wine. I found this to be an especially nice touch. It’s the little things… 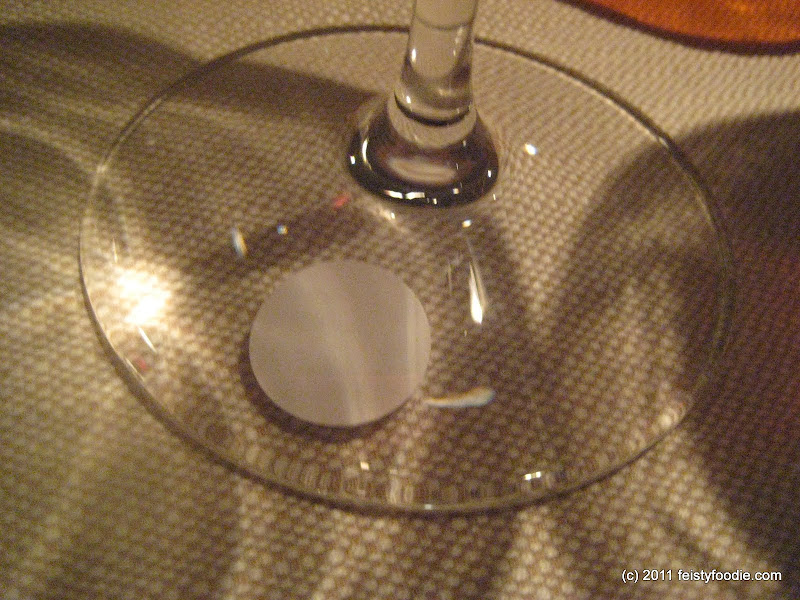 CT’s last course was the Fusilli- red wine braised octopus and bone marrow. I had a small bite of this and enjoyed it. It did have octopus in it afterall. 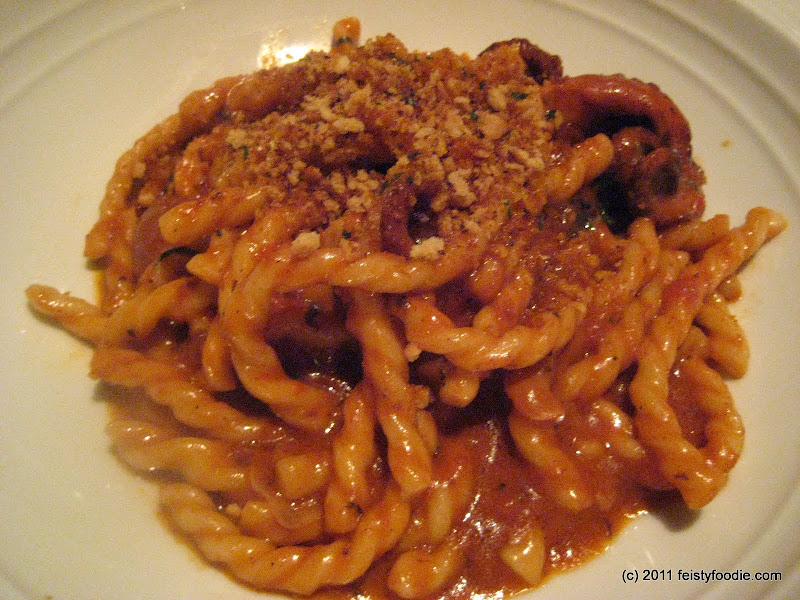 CT says: WOW. It’s like the perfect pasta. Firstly, I really liked the texture of fusilli. I feel like I never saw/ate it much growing up, but I like the way it holds the sauce. Plus, it’s easy to pick up with your fork. The octopus in the this dish was so tender! Since some of the pieces were a little large and I had no knife, I was a little concerned. But after eating one piece, I realized this practically melted in your mouth – no knife required! I’ve had some good octopus in my life, but this on another level. I’m drooling just remembering it now. The bone marrow also gave a creaminess to the sauce that overall made the perfect dish.

My last course was the Seppia- grilled Mediterranean cuttlefish, braised escarole, taggia olives, livornese sauce and wild oregano. Cuttlefish is very similar to octopus and calamari, so you know I would like this dish. It was lightly grilled with just a bit of char and a lot more tender than expected. The saltiness of the olives mixed with the escarole really brought the whole dish together. Although I was pretty full at this point with food and drink, I am pretty sure I cleaned my plate. 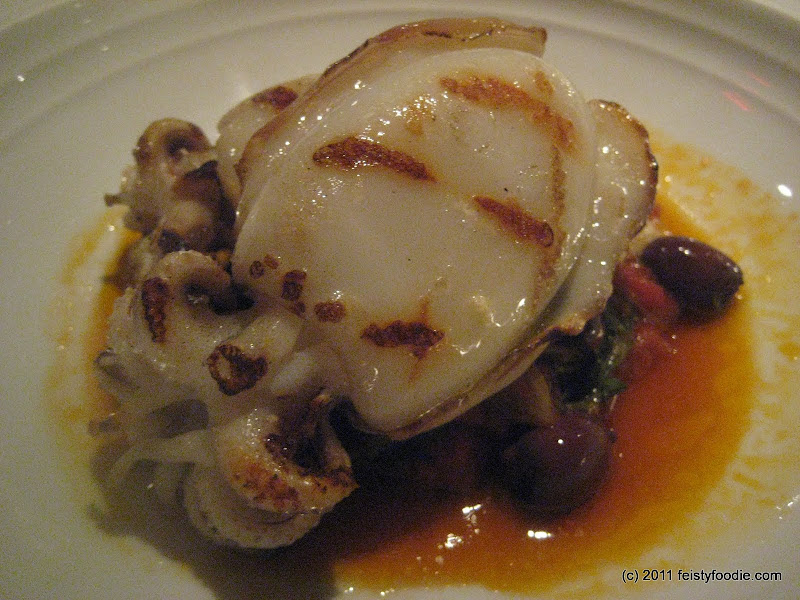 Since CT’s Dad was way too full to order his dessert, he let CT pick since she didn’t get the prix fixe. She went with the Caramello- caramel custard, valrhona chocolate cake, caramel crispies and buttermilk sherbet. 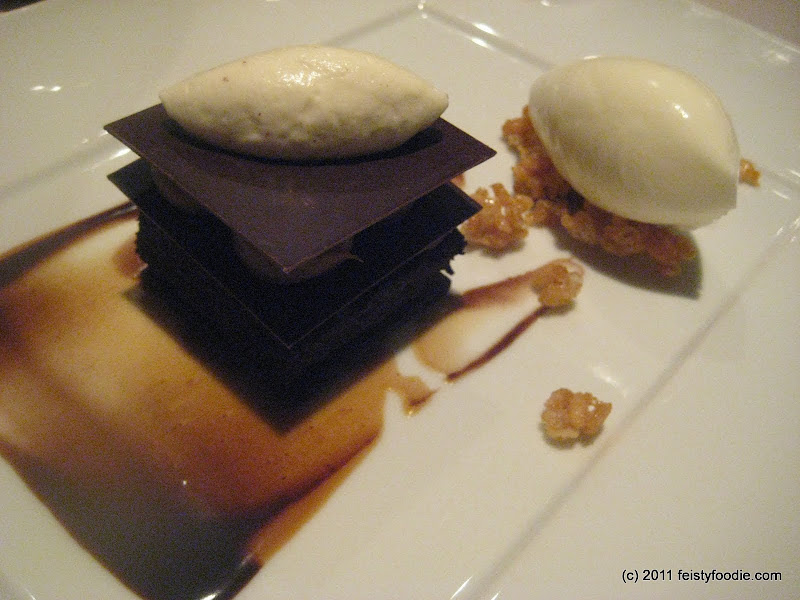 CT says: YUM! I think it was caramel, chocolate and buttermilk sherbet? All good without feeling to heavy. I especially liked having the little caramel crunchies with the soft cake and creamy sherbert.

It was quite obvious to our waiter that it was her birthday, so a candle-lit scoop of ice cream was brought out and a BONUS dessert! 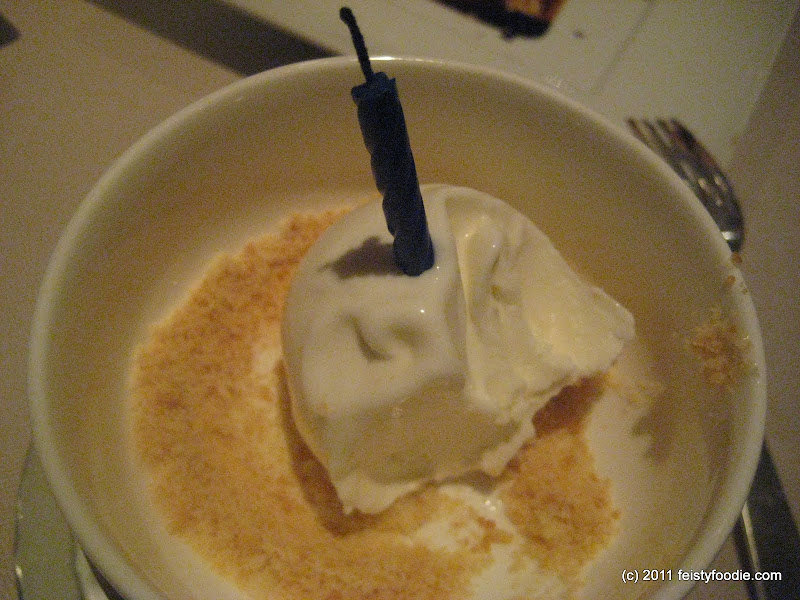 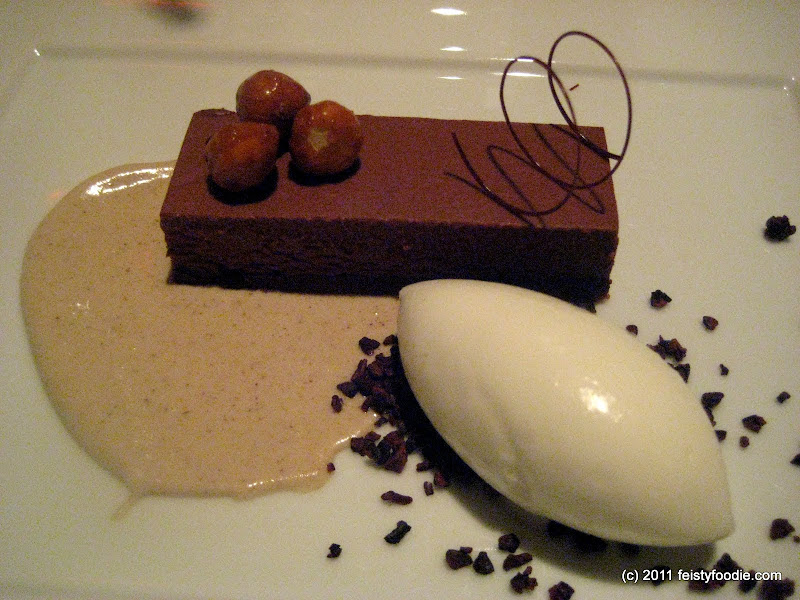 CT says: Bonus desserts are always nice. This was definitely the winner of the course so that was an extra bonus! It was very chocolatey, but also wasn’t very heavy. Even though I was incredibly full, it was hard to stop eating this. And again, I liked having the little chocolate crunchies on the side. From now on, I think I’ll demand crunchies with all my desserts.

Three desserts for the birthday girl!!!!

I chose the white chocolate panna cotta with grapefruit sorbet. Unfortunately, the online menu does not have this listed so I cannot describe the components more. It was really good. Once I took the first bite, I couldn’t stop, which is strange for me since I usually skip dessert. The tartness of the grapefruit worked really well with the creaminess of the panna cotta. 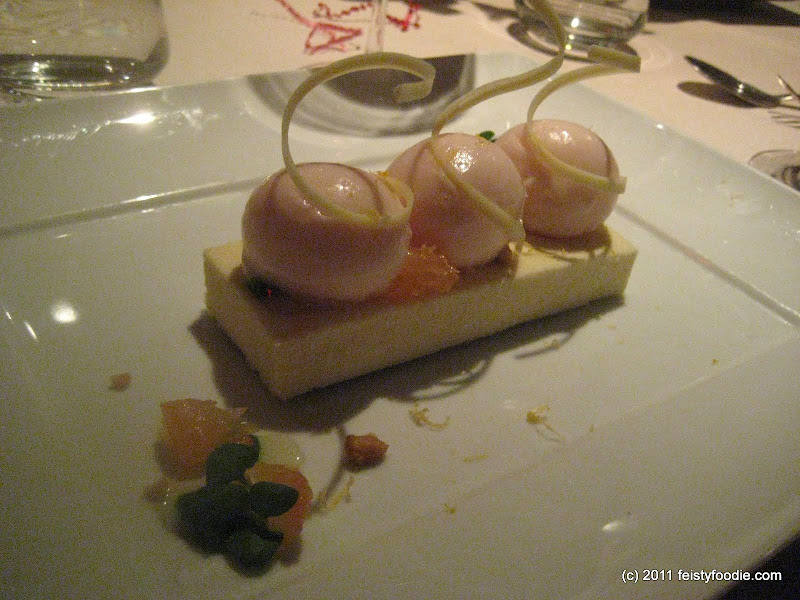 CT says: Of course I tried this one too. It was really nice – much lighter than the others and the tartness of the grapefruit lightened up the heavy feeling in my tummy. It also balanced the other chocolatey desserts well, so my spoon was traveling around the table quite a bit.

And what would a dinner of this caliber be without some petits fours and mignardises to end the meal. I am pretty sure the one in the 6 o’clock position was a tiny olive oil cake. It was delicious. 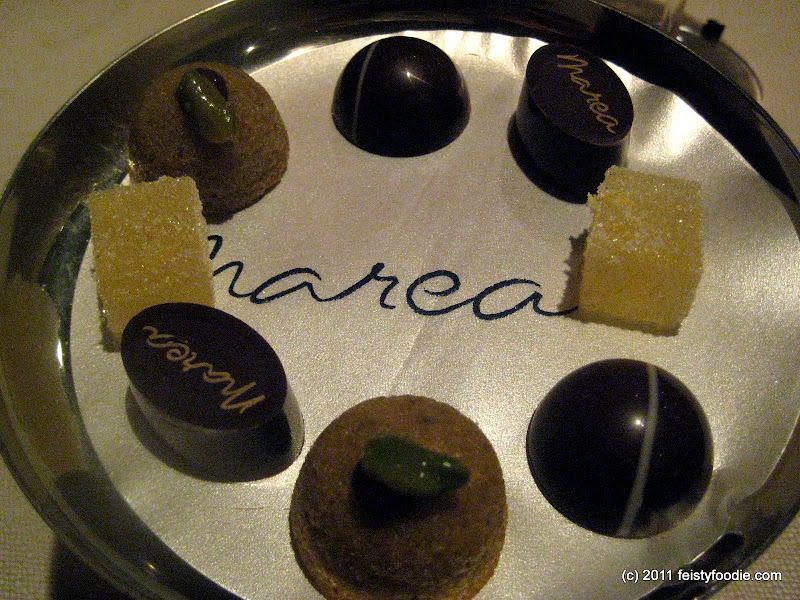 All in all, another fantastic meal in less than a day. Thank you to CT’s Dad for taking “the kids” out to such a decadent dinner. Michael White is the chef of the moment here in NYC, but can also back it up. I would definitely like to try out some of his other places for when the next special occasion rolls around.