Did you know there’s such a thing as baseball etiquette? 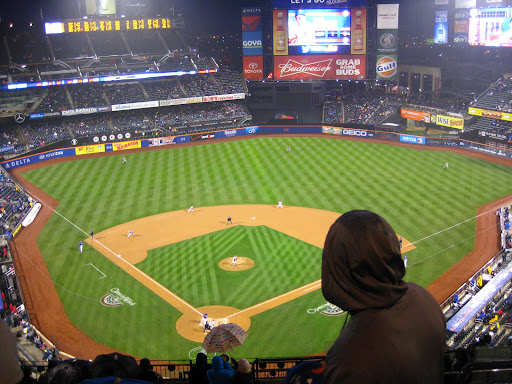 This photo prominently displays two people breaking two cardinal rules, and one of these people incited me to scream expletives within 3 minutes of me sitting down in my seat – something I rarely do at games. I yell, cheer, scream. I do not, however, ruin the game for people around me with kids by subjecting them to expletives.

At rainy baseball games, umbrellas sometimes become necessary. However, holding them high over your head such that it blocks the batter from view for those above you is never necessary, and even worse? When it’s simply so your friend can take a photo. Dearest, I would also like to take a photo of David Wright’s fist at-bat of the game, and I don’t want your umbrella blocking me.

The other one is, very obviously in this photo, the man standing. He was actually trying to get to his seat. On the west coast, there are ushers/workers who block the entrance to the sections during at-bats. The polite thing to do is to not enter your row until an at-bat is completed. Because otherwise you block people from seeing what’s going on. And yes, I’ve been known to scream “SIT DOWN” at people if they just stand there, staring. Another annoyance is people who sit forward in their seats so the people behind them can’t see.

Baseball is meant to be enjoyed and shared, and when you’re at the stadium, the biggest detriment to that isn’t when your team loses. It’s when other people block you from seeing the game!

Ahem. Now that the lesson in how to attend a baseball game without disturbing the other fans is over, let’s get to the food.

This past weekend, I attended two games – Friday night’s rainy and chilly mess (the above photo of David Wright’s first at-bat for that game; we won), and Sunday’s sunny but chilly mess (we lost). I ran around taking photos of the menus so you can see the new prices, per my usual from years past! 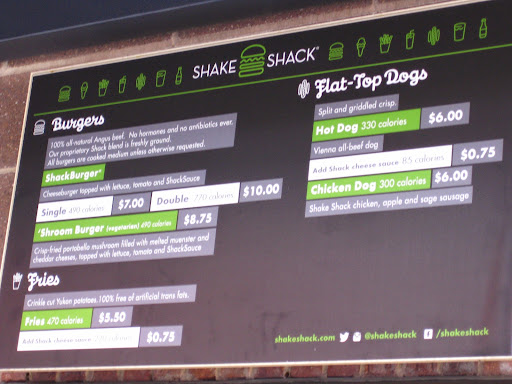 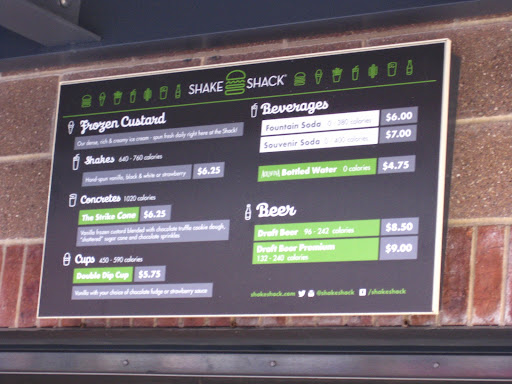 Shake Shack, which continues to have ridiculous lines. 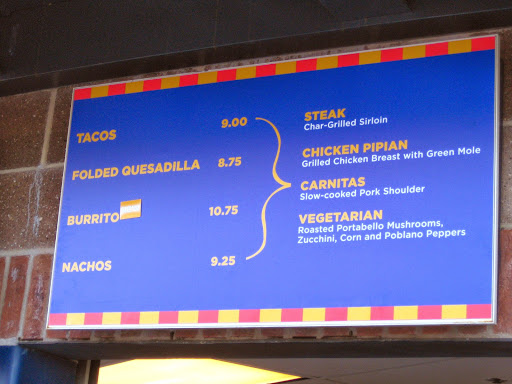 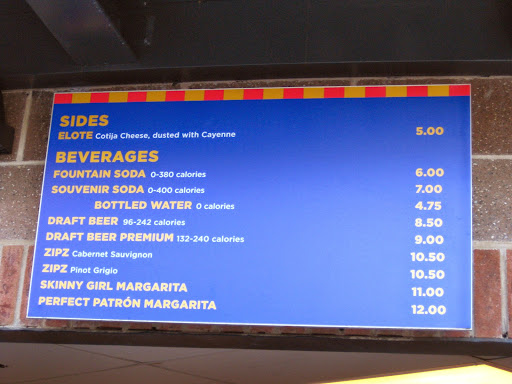 Taqueria el Verano, which has changed its menu a little bit – and elote is no longer the fabulous deal it used to be… but still good, I’m sure. Especially once corn season is in full swing! 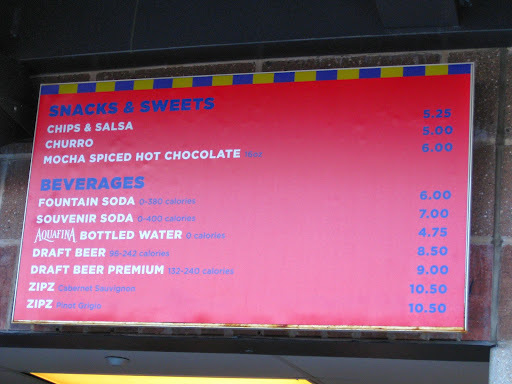 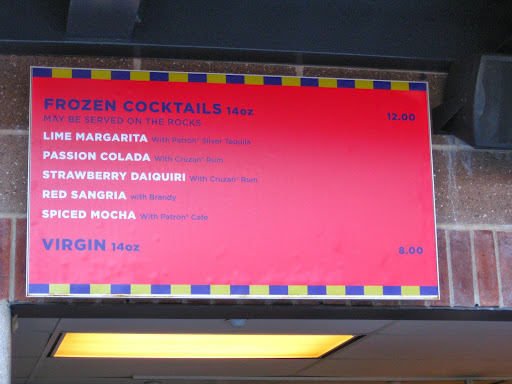 A new frozen cocktail window that’s wedged between Taqueria el Verano and Box Frites also offers a couple of interesting items – like mocha spiced hot chocolate! – that I will have to try while it’s still chilly out… and churros! YUM!!! Will they soon bring horchata to the mix too? 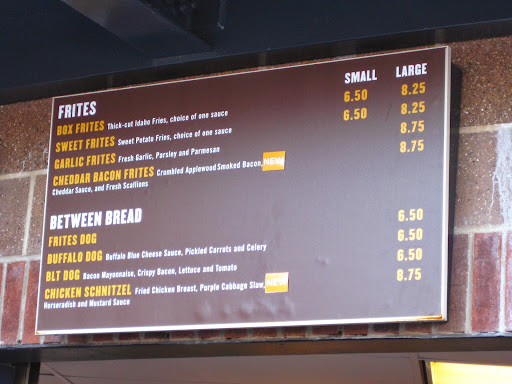 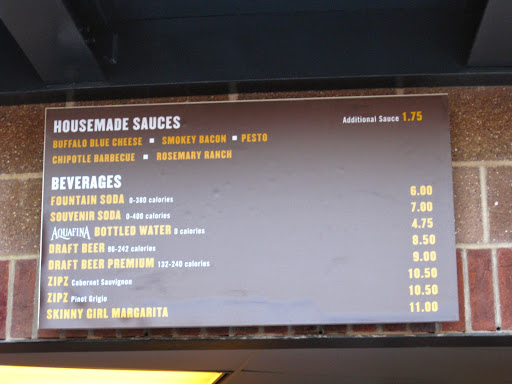 Box Frites – whose prices don’t seem to have gone up, but have added quite a lot to its menu… 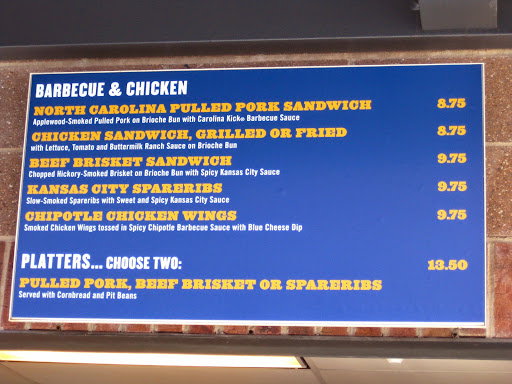 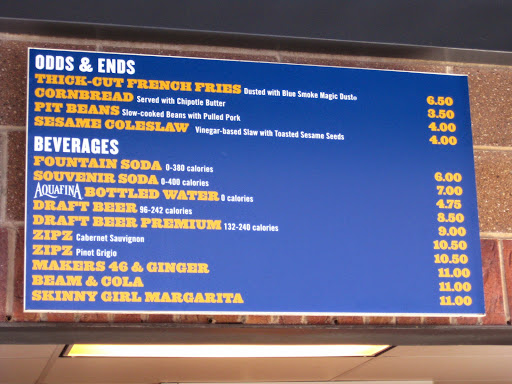 Blue Smoke, which has added a few things to its menu but kept the heart of it the same – minus the grilled bologna sandwich that was actually pretty darn good  (they lowered the price after I posted that, and it wasn’t too bad at its new price). And I’m happy to see my chipotle wings firmly in place – there was a brief minute that they were no longer on the menu, and I almost freaked out… as that used to be my go-to meal at Citi Field, an order of those and split an order of large Box Frites. 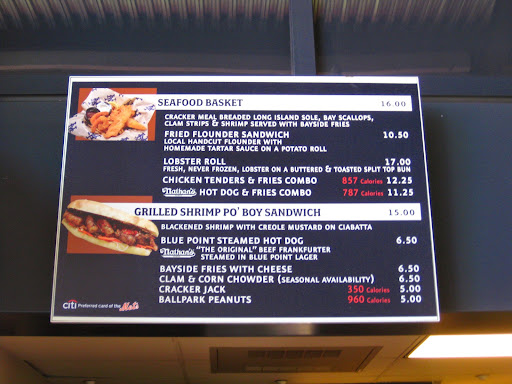 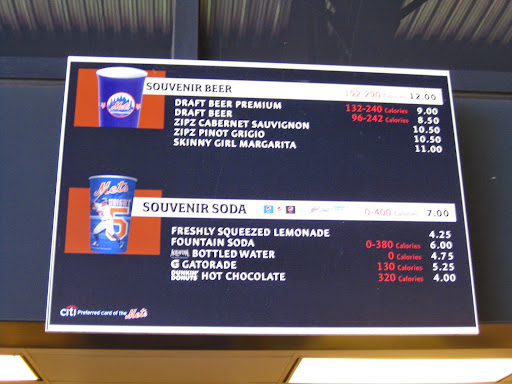 And finally, Catch of the Day. The lobster roll remains $17, which isn’t such a terrible deal unless yours looks like mine did. I will eventually try the seafood basket, which looks fun, and report back. 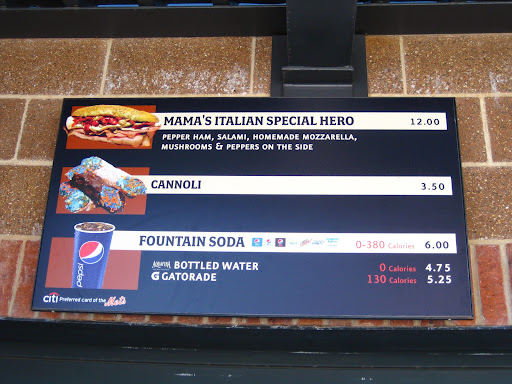 Mama’s of Corona continues to have a stand on promenade level (where I like to sit), though it was closed during both games I attended. The sandwich has gone up in price, so I’m not entirely sure I will make this a regular thing like it used to be – though I easily eat half and am satisfied. They’ve also abbreviated their menu drastically from where it used to be – it included cupcakes, salads, antipasto platters, another sandwich or two… I guess they figured it out. The people want what they want. 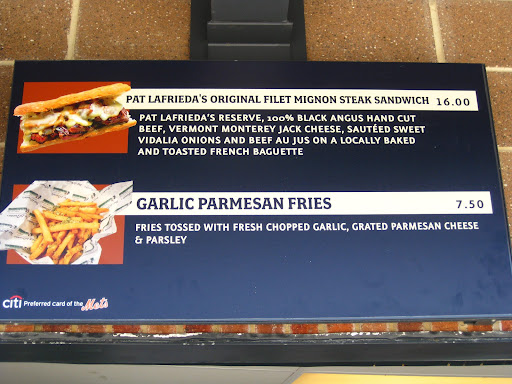 Last but not least, a semi-new stand (I think last season was their first?)… Pat LaFrieda’s steak sandwiches.  I bit the bullet and ordered a $16 steak sandwich at the ballpark, even though it goes against a lot of things I believe in – which is that ballpark food should be delicious, but not put you in the poorhouse.  (I have had the then-$15, now-$? steak sandwich at Yankee Stadium.) 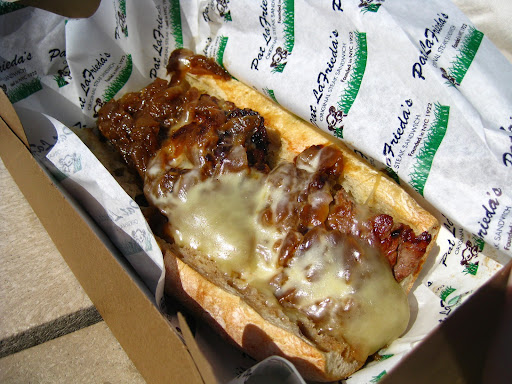 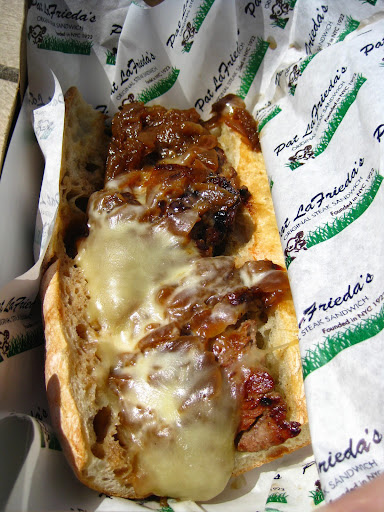 Before we get to that, though, the stand – early in the season, I suppose – had a lot of trouble getting their flow right. I get that with expensive ingredients and no way of predicting the number of customers at any given time, they aren’t going to just make a bunch of sandwiches ahead of time and let them sit – the quality would deteriorate so fast and the sandwich would sooo not be worth $16 – but they couldn’t get the timing right. I wasn’t told when I ordered my sandwich that it would be a 10 minute wait – that might have changed my mind, but it’s something they need to tell customers when they order. When I sat at a picnic table nearby and watched the line grow, disappear, grow, it seemed a constant struggle for them to keep up or have customers.

To the sandwich: it was a huge mess. Parts of the bread were completely soaked through with jus, while other parts were dry. The cheese and onion mixture kept slipping out, and so did the steak – instead of being cooked, then sliced up, a few steak medallions were just thrown into the sandwich, so some bites – many bites – were just bread, cheese, onions. The steak was a little hard to bite through sometimes, so I had steak sandwich all over my face. Quite honestly, the bites without steak tasted exactly like French onion soup – which is great for someone who likes French onion soup, I suppose, but if you’re looking for a steak sandwich and only every few bites has steak,… well…

I found the sandwich satisfying, though, and didn’t need to eat for very many hours (even though I also had a monster workout at the gym). It was probably a bit too messy to split with another person, though I saw a guy in a Cincinnati Reds jersey eating it with a plastic fork and knife, haha. If you want to try it, it’s not terrible… but definitely not something I’d strongly recommend or insist someone eat. 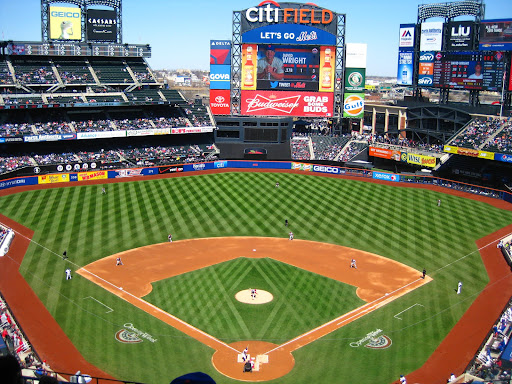 And here’s a photo of David Wright’s first at-bat on Sunday, April 6. Though we lost, I enjoyed the game alone, and have finally made some sort of peace with the Mets organization.

I boycotted baseball for most of 2012 and 2013, for a lot of reasons – not least of all how thoroughly SCREWED I felt by the Mets organization with regard to my Sunday ticket plan. I was furious about the price jacking and the fact that I was being forced to buy 15-18 tickets for the season, and I still couldn’t have every single Sunday home game. I could go on – I could share the letter I sent to my ticket representative – but I’ll leave that in the past (unless y’all comment requesting that I post it, which I will in comments).

(It was to my very great sadness that I was invited to the concessions preview in 2012 – the year I gave up my ticket plan – and haven’t been invited back since. Probably because of my drastically reduced coverage of the park and its concessions, so I don’t blame them… but still sad.)

I did notice that the menus now have little tags on them to indicate what items are “new” – which is nice.

In any case – here’s to more baseball, better eating, and a winning record!!!

« A few of my favorite things
Lady M Confections »