For a few years now, I’ve been writing a guide to eating at Citi Field (last year’s can be found here). Usually it’s just after the season has started – mostly because I do on-the-ground reporting, ie, I actually visit the ballpark a few times and report on price changes, new menu items, try a few things, and all that. This year, you’ll have that guide – though it may take longer, as I’m no longer a Sunday plan holder (to my great sadness) – but this will have to tide you over for now.

I received an email about 2 weeks ago, to my extreme excitement, inviting me to visit Citi Field for their annual concessions preview. I admit, I’ve read about this event nearly every year with a mixture of “Why wasn’t I invited?!” and “Wow, that looks good.” – I am one of the only (maybe the only?) person I know who not just writes about food, but writes about baseball and even writes about baseball food. It’s like, my one niche! Come on! So I sort of felt like I’d found the Golden Ticket…

even more so when I received an email the morning after the event informing me that the Executive Chef at Citi Field is “very aware of [my] work and enjoys it” – talk about professional validation!  *beam*  I realize how dorky I am for sharing that here, but it was one of those moments that just made it all worth it. 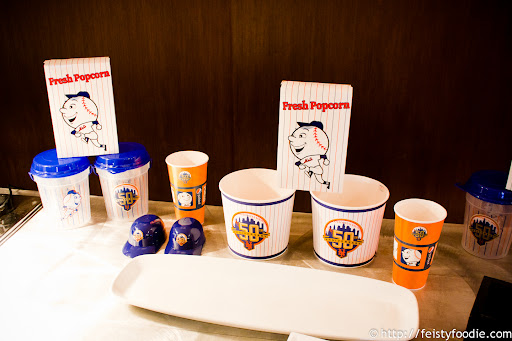 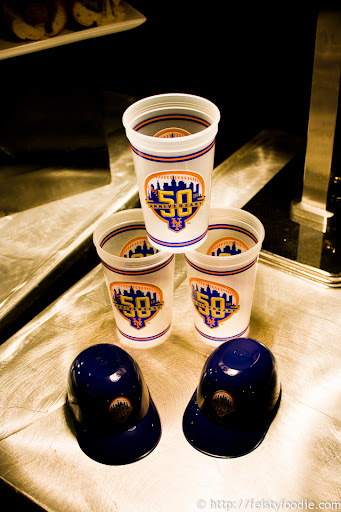 You may or may not know that this year marks the Mets’ 50th Anniversary – as such, specially-branded items will be available throughout the park with various concessions. I’ve got my commemorative helmet, bucket and cup already 🙂 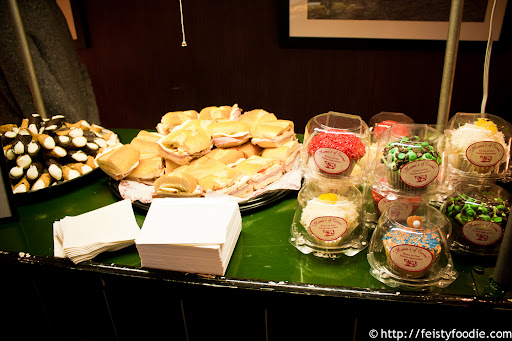 My perennial favorite, Mama’s of Corona, was there to showcase their goodies. Doesn’t appear to be anything new this year – but that’s okay, when you find something that works so well, why mess with it? exBF loved those cannolis and he’s super picky about cannolis, so take that as you will. (I’m not a fan of cannolis in general, so I have nothing to really share… I do recall that he’s got an issue with certain types of chocolate used to coat the shells, and these were fine; also, if the cream inside isn’t good, or if the shell is soggy, he gets annoyed, and he had no problems here. I didn’t teach him to be picky, but I did teach him to pay more attention to how things are made and why he might like something more at one place than another, and to be able to describe those differences – mostly as a way to help me improve my cooking, but it translated to everything he ate. Be more thoughtful of what you’re eating and how it makes you feel!) 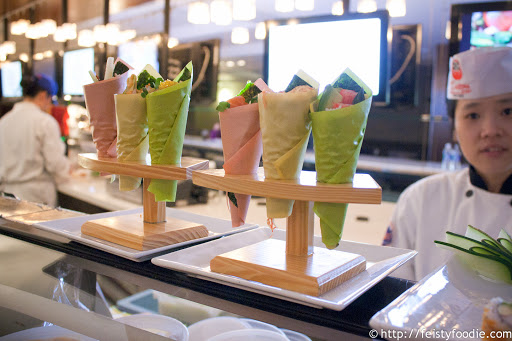 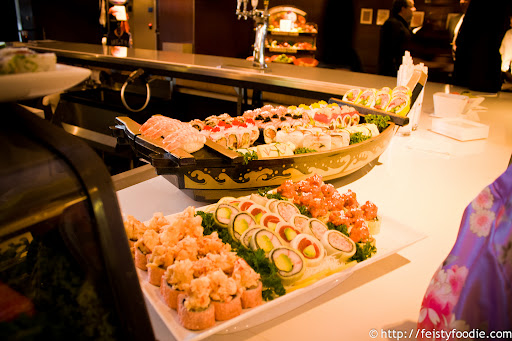 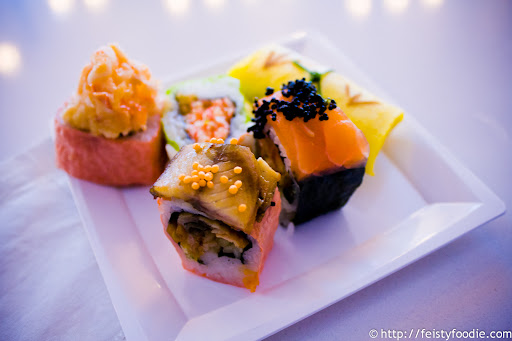 I have actually never had sushi at Citi Field, mostly because I prefer to eat other things – but this time, it was all so pretty I had to try some. It was really fresh and pretty good actually – I may have to check out their outside-the-stadium location as well. 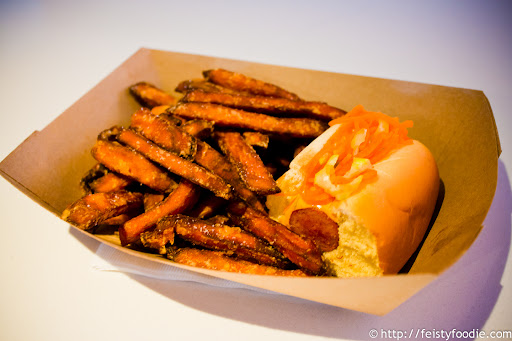 One of my frequent recommendations in my yearly guide is visiting Box Frites for frites. This year, they’re expanding the menu again and now offer sweet potato fries – which were crisp, salted properly and quite good – but also two hot dog options, so for those that don’t consider a large frites a meal in itself (who are you people?) you can now get a BLT dog (which wasn’t being offered that night) or a Buffalo Dog (shown above, cut into smaller sizes), an all beef grilled dog with Buffalo blue cheese sauce, pickled carrot and celery. Slightly spicy with a nice kick but nothing tear-inducing, a nice snap to the dog, I liked this though I couldn’t say I’d order this – solely because I like my hot dogs with a few simple items, and not covered in so much stuff (I like ketchup + relish and sometimes mustard).  They’ll also be offering fried fruit pies with caramel sauce, but I either didn’t see these or somehow failed to try one.  I’m mostly concerned about how this will affect lines and wait times – Box Frites has always had a line that moved fairly quickly, so this will undoubtedly increase that… 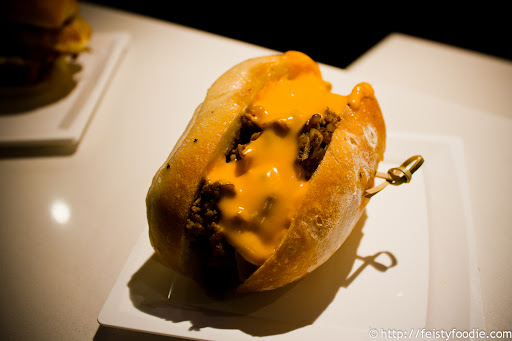 Caesar’s Club – where I’ve rarely been able to enter, as my tickets don’t grant me access – apparently has offered this “NY Cheese Steak Sandwich” for a while – no, it’s not a Philly cheesesteak.  I can comfortably say I am a cheesesteak expert and this had good cheese, excellent meat, the only thing wrong was the bread. It was too hard – so biting into it left a lot of stuff trying to squish out. Once I got past the outer crust, though, it all melted together into a really lovely bite… yum. 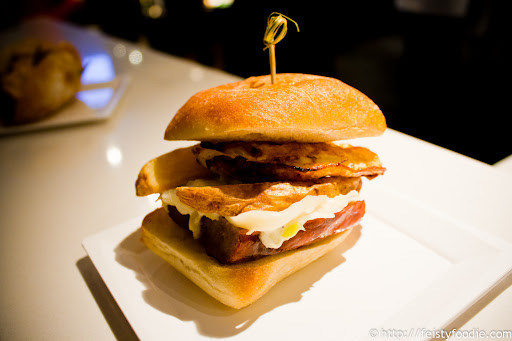 Promenade club – where, if I’d kept my plan, I’d now have access to simply because I’d have over 15 games in my plan – now offers a few new items as well. Home run wings – which are customized with your choice of sauce. We tried a few and they were all meaty and pretty good, I would not mind getting those (depending on price; I’m rather partial to my Blue Smoke wings).  They also now offer two new sandwiches – the New Yawkwah (corned beef, topped with sweet potato fries, bacon, pickles, slaw & Thousand Island dressing served on a pretzel roll) and the 7-1-Ate Special (pictured), with your choice of hot or sweet Premio sausage that’s been split and grilled, topped with a hash brown, fried egg, slaw and pepper hash on ciabatta.  I tried a bite and thought it was interesting – a lot going on in terms of flavor and all – but I definitely wouldn’t order this, too messy for me. Yes, I’d rather eat saucy wings than a sandwich that falls apart, haha. 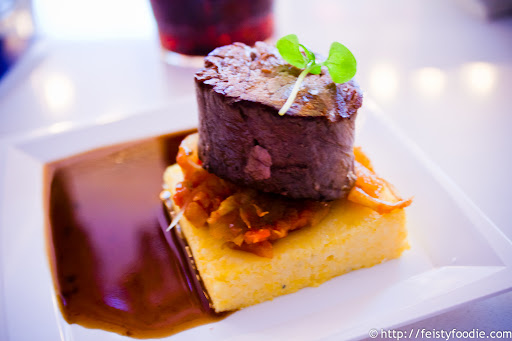 The Delta club has a few new offerings as well – I’ve been lucky enough to be able to sit down there for a few games, but rarely did I eat anything interesting – the above, seared tenderloin medallions atop polenta with a red wine demi glace. Yeah, it’s fancy. It was also really good. 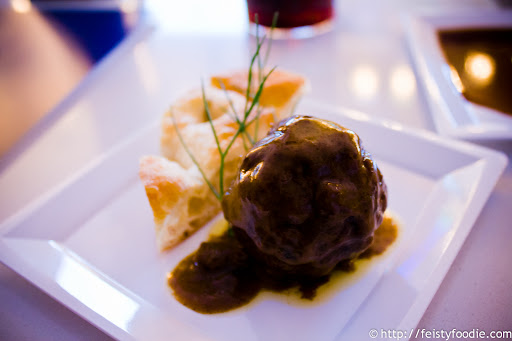 Also in the Delta Club: Swedish meatballs: not just for trips to Ikea anymore! These were actually almost shockingly tender, and just perfect. Think of your favorite Ikea meatball experience, then multiply that times 10. Or just take your experiences eating Swedish meatballs that had nothing to do with Ikea (mine are limited to Smorgas Chef in the city), and add a little bit to that. Yeah, that good. 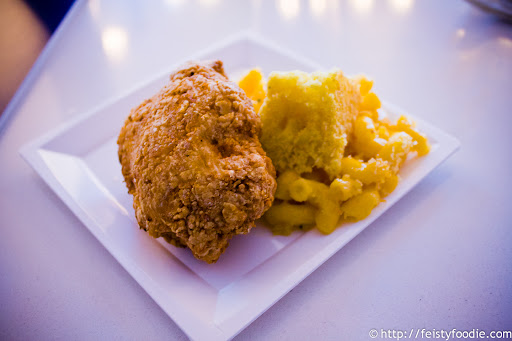 Empire Suites also offer buttermilk crispy chicken with mac&cheese and cornbread.  I mean, if you’re going to pay all that money for those seats… well, I thought the fried chicken was only OK, but you know I’m a fried chicken snob. 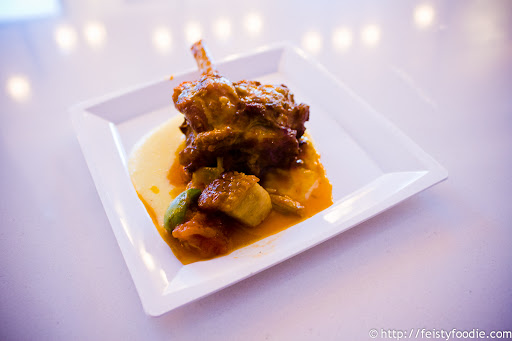 Pork osso buco is now offered as one of the entree options in the Acela Club – the all you can eat buffet I did one year.  Tender, delicious. 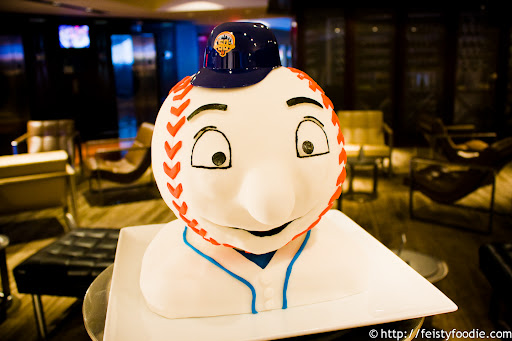 Then I ate Mr. Met.  I mean, wait, what?  Yes, dear friends, if you have an event catered there, you, too, can have Mr. Met’s bust as your cake. How awesome is that?! 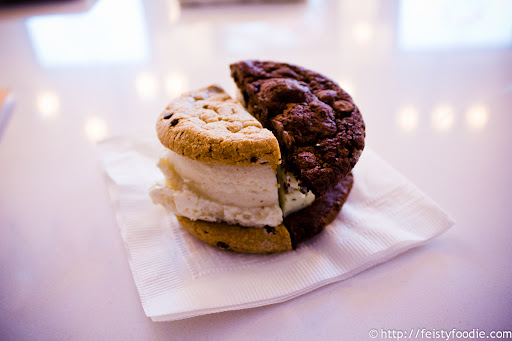 This is actually one of the items I am easily the most excited about: Cool Haus ice cream sandwiches are now available in all the clubs around the park. Okay, so I don’t generally have club access, but that’s not the point. I mean, I LOVE that Citi Field works with the little guys – not just big conglomerates, but that they have Mama’s of Corona, Daruma of Tokyo, alongside with Shake Shack and Blue Smoke – well, it means a lot to me that they don’t just look to those with big pockets.  That small businesses are represented at Citi Field is important to me, and that’s how I see Cool Haus entering this market: awesome.  Hopefully, eventually, Cool Haus will be available to all seats – not just in-seat service and those with club access (which, honestly, is most of the park – almost every level of seats offers club access of some sort, I just don’t have it because I had the cheapest possible seats)… hopefully!

I didn’t get to try everything, but here’s a list of what’s new and where:

Finally, a few things I discovered after speaking with the USHG chef who oversees Taste of the City, and the Aramark concessions manager…

Menus from Blue Smoke and Box Frites locations will be streamlined and will all now match – so no more “you can only get this at the Blue Smoke on promenade” as a pro tip. Speaking of which, THERE WILL NO LONGER BE FRIED CHICKEN BY THE PIECE AT BLUE SMOKE. Chef Scott Levine said “there will be fried chicken! in the sandwich” but let’s be real, when someone says “fried chicken” you don’t think “fried chicken cutlet in a sandwich” do you?  But menus at both Box Frites and both Blue Smokes will be the same as each other, no secret hidden items at least.

Other exciting news – at least for the beer drinkers among us – as I mentioned, Citi Field really works with our local/small businesses, which I absolutely adore. This year, SixPoint Sweet Action – the cream ale that is perfect on a hot summer day at the ballpark – will be available at Craft Beer Stands near section 105, 127 on Field Level and 413 on Promenade Level (which is right behind my section, actually).  There will also be Blue Point Summer, Toasted, and White India Pale Ale, Goose Island IPA, Kona Longboard Lager (!!!), Leinenkugel Summer Shandy, Magic Hat #9, Widmer Drifter Pale Ale… so craft beer nerds, rejoice – the selection is getting larger and larger…

This year promises to be interesting – not just in terms of the food and drink options at Citi Field, but the on-field talent. As always…