Since the first “What I’ve been eating…” post, I’ve thought often how some things I eat just never make it to the blog, for a slew of reasons. Sometimes it isn’t pretty, or the recipe isn’t quite finessed enough, or I just didn’t like it enough to want to work it all the way through to a complete recipe (yes, my no-measurement recipes are ‘complete’ to a degree!). Or maybe it’s a place I’ve posted about ad nauseum already. Whatever the case, I’ll be doing more of these posts – showing y’all what I eat, so you can eat vicariously through me… and hopefully not waiting 2 months between posts, because now it’s an awful lot of photos. 😉 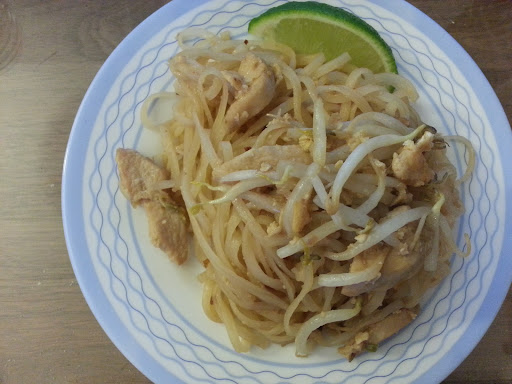 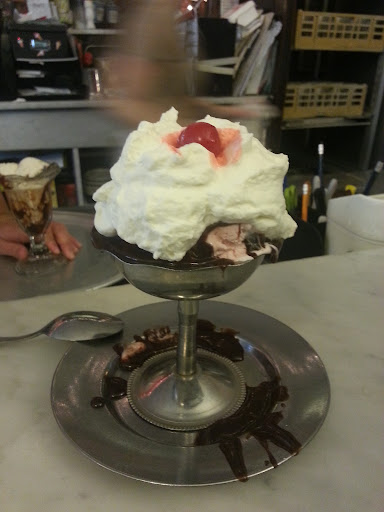 Mimosa in a Hoegaarden glass. That might be more sparkling wine than orange juice… but I’ll never tell… and yes, this was while watching football, because I don’t often have beer at home. 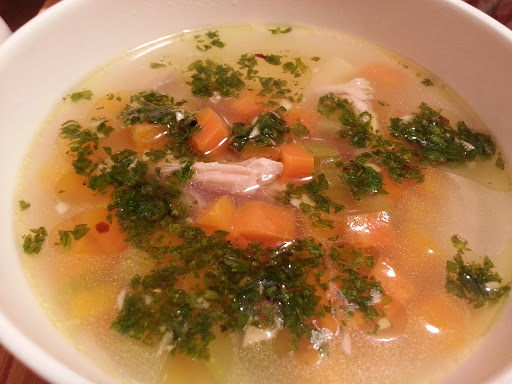 I originally planned on doing a Fun with Chicken post, much like my Fun with Pork post, but I wasn’t that pleased with the roasted chicken glaze I’d concocted. I bought a pack of chicken quarters and made 3-4 different dishes with the pieces, but some were just so obvious (chicken pasta soups and stews topped with homemade chimichurri), roast chicken… the above is the chicken pasta soup and roasted chicken quarters with pink grapefruit glaze. The glaze really needs a lot of work, it was really bitter, but I think the pink grapefruit marmalade I started with had too much pith in it and that can’t be saved. And I put way too much Sriracha in it, so the bitter-spicy combination was really… interesting, but not necessarily something good. 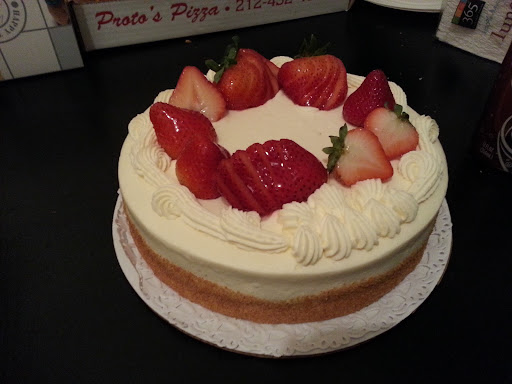 Poker night – pizzas and then Dessert Zombie rolled through with a strawberry shortcake from one of the Japanese bakeries (Zaiya or … I forget, hopefully he remembers and will let us know!). I think I ate three slices… 😡 It was good! Light, airy, fluffy – so no, not a traditional shortcake, but still tasty. (I brought wine.)

My BFF and I went for dim sum at Pine Court Bistro one weekday – it was completely empty! The dim sum was fine, nothing to write home about, but I went back a week later with Dessert Zombie and his friend and found it too oily, though it was busier. Boo. They also have a 2 lobsters for $10 deal on weekdays for lunch – no takeout, one order per table, no doggy bags – that I might go back and try… (Though sadly, I soon will no longer have a car…)

One of my great indulgences is hot chocolate! the real kind. I stopped drinking ‘cocoa’ years ago… though I will say that the fancier the hot chocolate, the less likely I will enjoy it, because it’s too rich and thick. I like mine to be creamy without tasting like a melted chocolate bar. For some reason, I went through my pantry and discovered more hot chocolate than any human being who lives alone and has no kids should have – these two mugs were made with Williams-Sonoma hot chocolate (which is chocolate shavings that you melt into whole milk on the stove). The first is topped with softly whipped cream scented with almond extract – yes, I routinely make a little bit of fresh whipped cream just for me – and the second is topped with Trader Joe’s Dark Chocolate Peppermint Marshmallows.

Lunch at Corfu Grill one day.

Attended an event near Lincoln Center and these were passed around.

After The Strand, I walked next door to the bakery – which is owned by the same people – and bought two cookies for 75c each. These little chocolate bombs were delicious! perfectly chewy, and great with an ice cold glass of milk.

Soup dumplings (xiao long bao), stir fried rice cakes with pickled mustard greens and pork, and (not pictured) cold sesame noodles at Shanghai Cafe Deluxe. Note: the cold sesame noodles are really good – if you like that type of dish – a huge mound of slippery noodles covered in a peanutty sauce for $4.95 or 5.95. This was the second time I ordered it. I really like them.

I attended an event promoting Amex and Milk Bar, and one of the goodies was a container of 6 different Milk Bar cookies. The above is my brother’s favorite… I ate all of them though and discovered that the corn cookie is pretty ridiculous in how good they are.

Post-Paul’s, Dean and I went to Butter Lane Cupcakes for dessert.

I don’t know that I’ve ever cooked for someone who complained so much during the entire process… as a “thank you for watching my dog while I went to California for 2 weeks, oh no I’m stuck here for another week because of the hurricane” to my buddy EL, I cooked dinner. It was an agonizing process coming up with a menu he actually seemed halfway interested in eating, then when I actually got there… well, let’s just say that the couple of bottles of wine I brought helped lubricate my mood enough that I didn’t tell him off. First: TOM salad (tomato, onion, mozzarella) dressed with Persian Lime olive oil and Cherry Gold Balsamic vinegar; second: braised short rib pasta with brown butter mushrooms.

Trader Joe’s tater tots, with slightly too-caramelized spicy ribs. I used way too much chipotle powder in my rub, so much that I actually ate some of the ribs with sour cream to cool my mouth down a bit.

Breakfast one morning. I absolutely love my egg cup (though I overcooked my egg slightly). I thought I bought 2 (because I’m a hopeless romantic who’s also practical and knows I won’t live alone forever, I tend to buy things in multiples of two – 2 martini glasses, 2 champagne flutes, 2 cute rice bowls, 2 egg cups! where is the second one?!) but I can’t find the second one, sadface… Isn’t it cute?! I’m pretty sure I bought it from Crate & Barrel but can’t find it online, boo.

My brother has taken to cooking for me (and our mother) every once in a while. On our dad’s birthday, he made pork chops with corn. (Rice, too, but I don’t really eat rice much.) Funny story that should have made the blog a while back: over the summer, he invited me over for dinner and made steaks for the three of us. When he served me, my steak was covered in minced garlic… BURNT garlic. I silently poked at it, then scraped a lot of it off and ate my steak (which was cooked perfectly fine). Bro looks at me and says “Hey, I thought you said you liked garlic a lot.”

Me: “Yeah, I do. But this is burnt and burnt garlic is super bitter.”
Him: “You said you liked burnt garlic!”
Me: “NO ONE LIKES BURNT GARLIC ARE YOU CRAZY?!”

I later figured out I must’ve said I like roasted garlic and he misunderstood or misremembered… we had a good laugh at that. And now he doesn’t put minced garlic on my food and burn the hell out of it before giving it to me…

(Maybe it’s one of those things that you have to be there to understand how funny it was… my steak was literally covered in burnt garlic, edge to edge.)

Sometimes I just want to eat soft food. I roasted a pork tenderloin, sliced some and put it on bread… smeared with fried onion cream cheese dip. (My throat was bothering me, thus the desire to eat soft, non-scratchy food, or I’d have toasted the bread.) Really delicious!

The next day, I ate a few slices of the pork tenderloin over a spicy soba salad. Yum.

And another day (the tenderloin was a good 1.5 lbs, a lot for me to eat by myself)… eggs beaten with Sriracha, mixed with sliced button mushrooms and cubed pork tenderloin, poured into buttered ramekins and baked at 350 for about 20 minutes. Definitely need to change the technique next time – tasty enough, but the mushrooms gave off a lot of water which sort of sogged the whole thing.

A friend had Sunday Supper at his place – chicken picatta and kale tabouleh… so good and somewhat healthy (after we ate a ton of dim sum that morning, haha).

I wanted something different, so I roasted button mushrooms (um, yes, will be doing this again, so good!) and marinated a chicken thigh in yogurt mixed with some seasonings. The chicken thigh was fine, but I need to work on what seasonings to use for a different effect next time…

Remember those walnuts? I tried to put them to good use: walnut crusted salmon, mushrooms stuffed with walnuts/lemon, noodles tossed with walnuts/lemon/dill, some purple cabbage dressed lightly with lemon juice and some steamed ‘yu choy’. There are more recipes featuring walnuts coming, so stay tuned… the above used less than a cup of walnuts.

I did not eat Keywee. However, she wishes to tell you, “Don’t be too envious of Mommy. I live with her, and I never get to eat ANY of the stuff she just showed you.”

Her expressions crack me up. Hahaha!

What have you been eating lately? Share in comments! And if you have suggestions for ways to use the walnuts, or things I can/should do with pork belly, or recipes for salmon fillets… LET ME KNOW. Or even just suggestions what to make next that uses lots of pantry items! I’m all ears.