I was recently invited to the friends/family/preview night of The Strand, a new BBQ place that opened in Astoria. I consider myself a bit of an expert on BBQ in NYC – I’ve visited all of the top contenders, most multiple times (though a few of the newer places are still on my to-do list), and have a really good basis for comparison, so I was pretty excited to check them out a few weeks into their operations (they’d been in soft open up to this point). The space is huge, gorgeous, with high ceilings, lots of long wooden tables, a nice stage on one side for live music most nights, with a fantastic bar when you first enter. 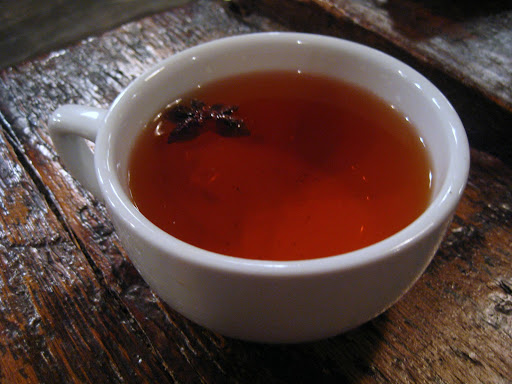 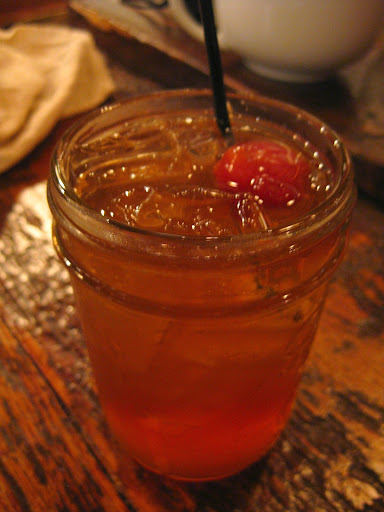 While EL thrilled over the beer selection and quickly found his choice for the night, I was intrigued by the rest of the beverage program. It was a bit of a chilly night, so my first drink was Shelter from the Storm: bourbon, whiskey and apple cider. This was a hot drink, which was most welcome, and I enjoyed the blend very much. Though it was very strong, it worked well with the apple cider and went down very, very easily – almost too easily.

My second drink of the night was the Lower Manhattan – also very well crafted and tasty, and again very strong. I had to slow down here as I drove, but it was clear that the beverage program was a winner. Very nice, strong cocktails to play against the smoky meats and rich side dishes – I was very happy and would almost go back for the drinks alone (and some meats). 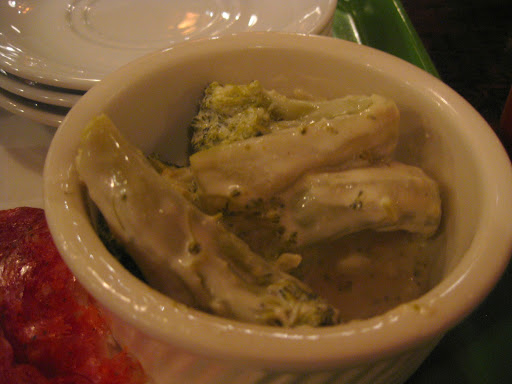 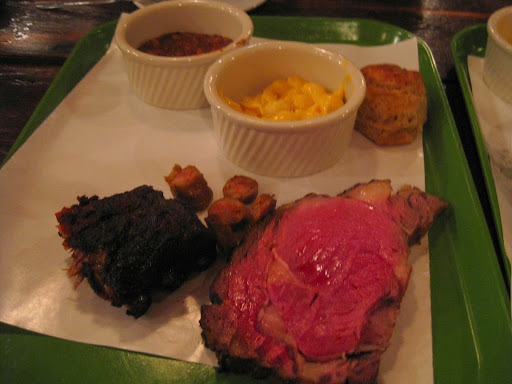 Unfortunately, the meats didn’t fare as well. There were inconsistencies in our food from tray to tray – our second helping of prime rib was huge, meaty, tender, and seasoned nicely, while the first – if you can pick it out in the first pic – were these tiny slices that were bland and overcooked. Granted, this could simply be the cutter trying to serve more people with less food, and the second tray acquired 30 minutes later might have been from a fresh roast, but our ribs were also good the first round, then burnt and dried out our second round. The sides – mac&cheese was strongly recommended by a friend, and EL seemed to enjoy it enough to want a second helping of it – I thought it was a bit too rich against the meat. However, it is better than many other BBQ places that serve it – a lot of times, it’s overcooked or not cheesy enough or the cheese is too sharp. This one hit all the right notes in terms of flavor, was creamy enough and very tasty on its own. My side choice, listed as ‘creamy broccoli’ on the menu, garnered an “Is that soup?” from my friend EL. I shrugged, as I wanted vegetables and was curious about such an item regardless. Surprisingly, it was big chunks of broccoli with a slick of a creamy sauce on them. It was unique insomuch I don’t believe I’ve seen a similar item on restaurant menus in the past, but I don’t know that I’d order it again – y’know, if it’s on a buffet, I’ll eat it, but I wouldn’t want to pay a separate $3 for it.

The place is still too new for any sort of official review, but with such a great beverage program, and capable chefs in the kitchen, there’s a lot of potential for something truly great here. I look forward to revisiting in 6 months when they’ve had time to work out some of the kinks and really get a good system down for the meats, and seeing how far they’ve taken everything by then.

In the meantime, definitely check them out, if only to marvel at the really lovely space… and have a drink or two. Winter’s gearing up… Shelter from the Storm would be lovely right about now, wouldn’t it?

Please note that all food and drink were on the house. I was under no obligation to post about my experience, and received no monetary compensation to do so. Opinions expressed are my own.