I love when spontaneous plans come together! I haven’t hung out with my girl Cookie in ages, but after a random message recently, we just started chatting and decided to grab dinner one night… when she revealed that due to doctor’s orders, she’s now gluten-free. Bear in mind that Cookie is, to date, the only friend I have with a restricted diet (previously vegetarian, now pescetarian) that I consent to dining with, because she is that awesome and we’re both flexible insomuch that she will go to places that serve meat and just order non-meat dishes, and I don’t complain about her not eating meat. Tossing gluten-free into the mix though, I had to think fast to figure out a place. In the end, it was really serendipity – we walked through Madison Square Eats on its first night open, and I spotted the ilili stand, remembered how much I liked it and how I’d been meaning to go for dinner – so we walked the two blocks to check it out. I knew vegetarian wouldn’t be a problem there, and was fairly certain gluten-free would be okay. Luckily, because the place is so big, we were seated quickly without a problem around 9pm on a Friday night.

I need to take a moment here to detail how amazing our server, whose name was Masad I believe, was. He showed up with pita and a dip whose description escapes me, and when we explained to him that Cookie was gluten free and vegetarian, he went through the menu recommending dishes that would suit our purposes. He was incredibly accommodating, friendly, and super nice. He made sure the kitchen was aware of her allergy, and came by to check on us repeatedly. I mean, he was cute, too, and super tall, but that’s not really relevant to his service… In any case, while we were having a great time regardless, his service really elevated the experience to an entirely new level. Thanks for taking care of us!!! 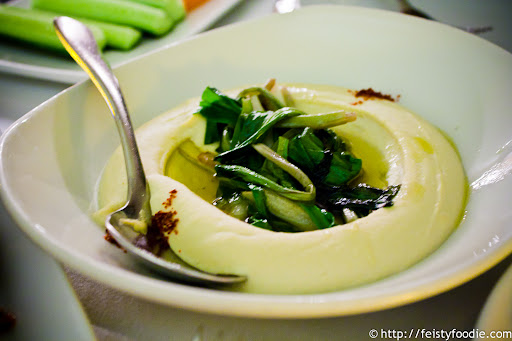 While browsing the special menu, I noticed hummus with ramps on it. Ramps have such an abbreviated season that foodies go nuts over them; I like how they taste but I won’t go batshit over them. (Though the following week, walking through Union Square Farmer’s Market, I was really tempted to buy some even though I wasn’t going to go home for hours and they’d surely wilt!) Cookie suggested we get this, and I happily agreed. Their hummus is creamy like no other – so smooth and yet so delicious. The ramps were merely gilding the lily here, but really, the whole combination was delicious. Our server also brought out crudite (cut up veggies) for Cookie to dip, since pita is not gluten free.

He also came by to explain that our dishes might take a little longer to prepare, as the kitchen wanted to ensure no cross contamination occurred. Cookie thankfully isn’t allergic to on-contact-gluten (I asked before I dipped the pita into the dish), but we appreciated the gesture and explanation nonetheless. 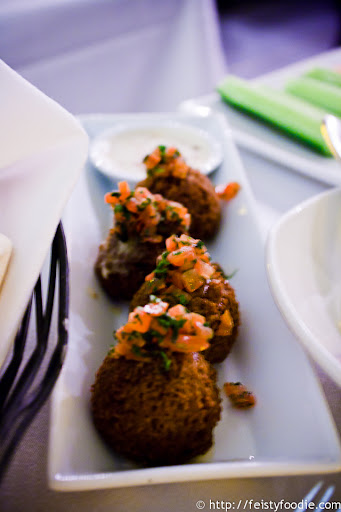 Falafel: Cookie said this was the best damn falafel she’d ever had. I think my first falafel, years and years and years ago somewhere in Rego Park/Forest Hills, was probably the best one I’ve ever had, but she certainly enjoyed these and I liked them as well. Not too dense, moist, and spiced just right, I though these were great. 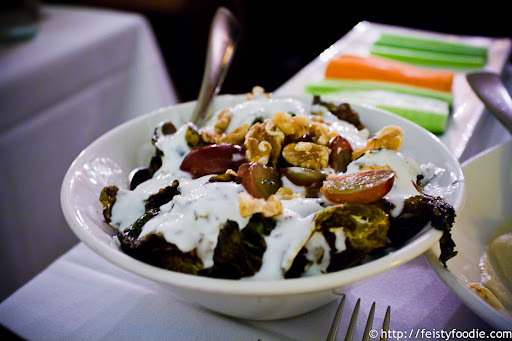 However, this dish is the one that sent me over the edge swooning. Recommended by Masad as one of the favorite dishes at ilili, Brussels sprouts with walnuts, grapes, fig puree and mint yogurt. I love Brussels sprouts, the bitterness of which was tempered by the sweet grapes, the crunchy walnuts, and the cool mint yogurt on it all. I happily was the recipient of the leftovers and scarfed this down the next day – so freaking good. I must try to replicate this at home! 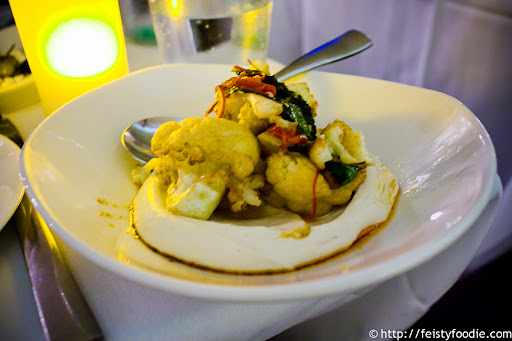 We also had cauliflower with chili peppers, mint and labne tahini – this was good, but I didn’t go nuts over it the way I’d done for the Brussels sprouts. I didn’t think it was a very substantial dish, though the cauliflower was cooked perfectly – tender but still with bite, and there was some heat from the peppers… but eh.  Double order of the Brussels sprouts next time! 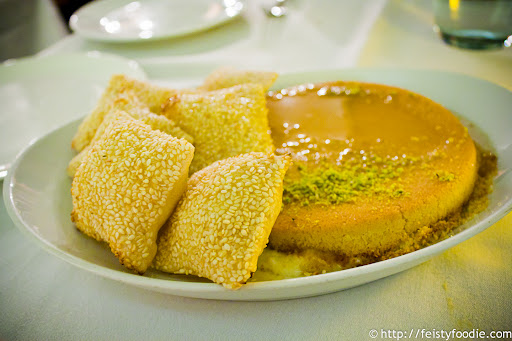 Though we were super full, I’ve been eyeing this dessert since I first heard of it – the knafe (kuh-nahf-fay). Pita pillows that you’re meant to fill with the cheese+crumb mixture on the right, this arrived at our table borne by a runner who looked on the tray, looked at us, and then placed it in front of me, turning to Cookie to say “this has gluten in it, please don’t eat it.” We were both amused that he’d been sent with a note specifically stating that we should be warned again (as we had when we ordered it) that there was gluten in it. LOVE the attention to detail. I obviously couldn’t eat the whole thing, but what I did eat of it… oh my! fantastic. Orange syrup, cheesy goodness with just everything working together. I probably wouldn’t order this again – and definitely not by myself! – but it was a great thing to experience and just super interesting, different from most other desserts I’ve had in the past.

Yvo says:  I’ve greatly enjoyed ilili in the past, and this experience just sealed it for me. The food is excellent, the service was incredible, and just… such a fantastic experience. All the above, plus 2 cocktails (the Fresh Meadow, which is designed for me! wah! but I’m still not drinking) and a bottle of sparkling water, came out to around $100. Not bad at all! We both had a fantastic time and would go back in a heartbeat. Thanks for the awesome experience!
highly recommended