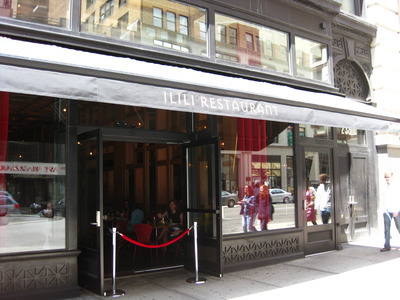 Before I left for Peru, ILILI began offering brunch in their spacious (I mean huge – I think the place holds 250 people?!) restaurant, and invited bloggers to come sample their brunch menu.  Despite brunch’s ill reputation as a service most kitchens hate to offer and as one of those things that many people just love saying “I’d rather make my own brunch at home and get exactly what I want without sitting on top of other people, I actually enjoy brunch out quite a bit.  It’s true that at the end of the day, what is so unique about brunch menus?  It’s usually the same stuff, eggs a few different ways, Benedict with some variations… (one of the ways I justify paying for this is that I do not wish to learn how to make a proper Hollandaise sauce, so will go to a restaurant and rely on them to make it for me!).

Well, ILILI rocks the boat with its Mediterranean spin on the brunch menu.  Instead of simply offering Mediterranean twists on classic dishes, they also offer some truly unique dishes. 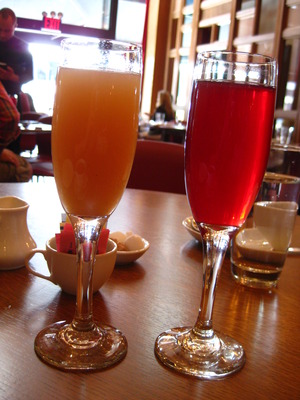 The brunch menu is structured as a $25 prix fixe, which includes a ‘normal’ brunch drink (American coffee, orange juice, or grapefruit juice) and a choice of pomegranate cava, mimosa or bellini.  I chose the bellini, but wound up trading for the pomegranate cava, which was much bubblier and happier, suiting my mood better. 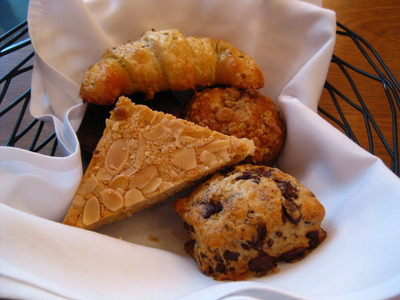 We chose to add a bread basket ($9) to our selections, because we were feeling munchy and why not? 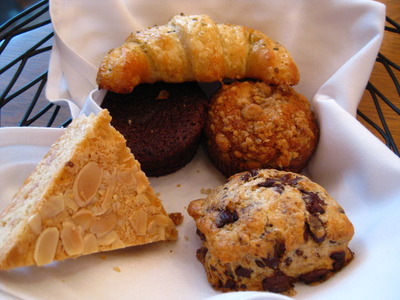 I tried a bit of everything and found myself enamored of the lemon almond blondie, dense and moist, very lightly sweet.  To be honest, though, my dining companion and I found ourselves with near exactly opposite opinions on each item; he didn’t appreciate the almond blondie, nor the dark corn-muffin-looking piece which boasted a hint of maple, slightly smokey and to me, yummy, while the croissant had an herb mixture I found displeasing to my palate, and the crumb-topped apple muffin – containing real chunks of apple within – wasn’t to my liking, but he enjoyed both greatly.  The scone was a toss-up for both of us; in the end, it worked out well for us both, as we didn’t have to fight for anything in the basket. 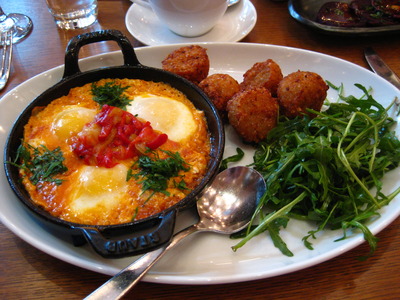 I’d asked a friend what I should order here, and he’d mentioned that though there are the standard eggs benedict (two different kinds – one even with truffle hollandaise), I should really try the more unique offerings.  I’m glad I did – above is my order of the chakchouka cocotte, which turned out to be basically eggs baked into a spiced tomato sauce.  It was so good – the tomato sauce dollop atop it boasted a lovely sweetness, while the eggs were fragrant with the spices used to cook it (which I can’t exactly name for you – these are not spices common in my pantry, so I certainly can’t name them offhand).  The nuggets of hashbrown dumplings were amazing – crisp, crisp exterior with a super chewy (like mochi!) interior, but when I questioned the extremely talented John Shim, a chef at ILILI, he said it was simply grated potato and onion, much like a latke, and fried properly.  SO good. 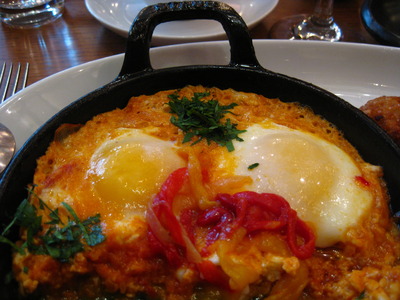 I was impressed with the eggs being baked in this sauce and yet not overcooking whatsoever – my yolks remained liquid gold and delicious.  (Yes, I love raw egg yolk, and have since I was a small child… mmm) 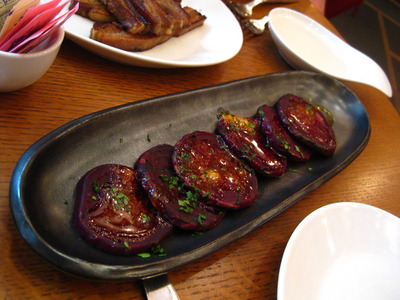 For my side, I opted for the grilled beets with aleppo honey butter.  The aleppo was slightly spicy, but unevenly spread across the beets, which proved a bonus point for me.  I enjoyed this dish greatly but honestly, I love beets so you could probably feed them to me nearly any old way and I’d love them. 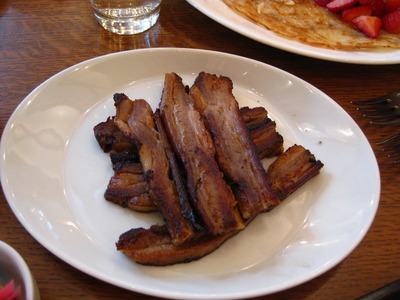 My dining companion ordered the veal bacon.  Speaking to Chef Massoud after our meal, we mentioned to him how much we adored the veal bacon – and he explained its existence was partially out of deference to the many non-pork-eating people from the area which this cuisine represents.  Smoky, but not overwhelmingly so, the meat on this bacon was so tender, you could pull it apart.  Oh my, this was simply fabulous.  I think I could eat this every day for the rest of my life and not feel guilty; it wasn’t particularly fatty or oily, which is nice so early in the day. 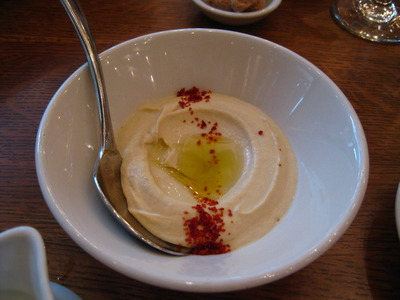 Wanting to try more of the menu, we opted to add on hommus, which is, in all honesty, a pretty standard dish from this part of the world as well.  However, this was anything but standard.  Fluffy, creamy, with absolutely no graininess nor contrasting texture – which, in this case, worked – I was blown away by the hommus.  I’ve eaten a lot of hommus in my life, and this was simply fabulous.  I asked Chef Massoud what his secret was, but he told me that it was simplicity.  Nothing fancy to this hommus, with very few ingredients.  If memory serves, it contained about 3 ingredients (chickpeas, tahini and lemon juice).  And it was amazing. 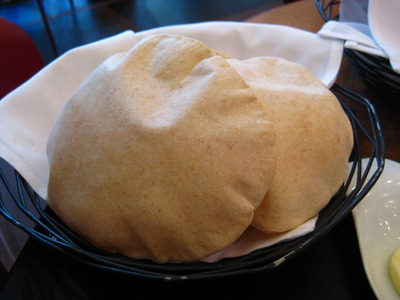 This was served with very airy and hot pita – each one was puffed up like a pillow! – that we could have had replenished, but nearing that wall, we declined politely.  I could have spooned that lovely hommus straight into my mouth and consumed it that way, quite honestly… and been very happy. 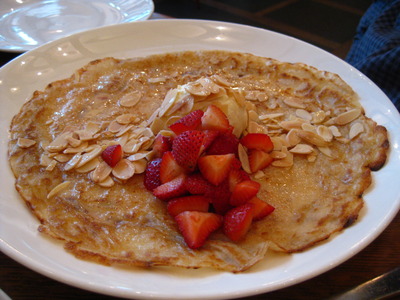 Another dish my friend had recommended was the katayef, or a Lebanese pancake.  We opted for the fresh fruit one, topped with strawberries, lots of almond slivers, and a mound of (yes, there’s something in the center of that ball!) what we thought was cheese (think it is called ashta, and a quick Google doesn’t really tell me much).  Since I’m not a fan of crepes, I only had a teeny bite, but my dining companion seemed quite taken with his choice.  The ‘cheese’ spread nicely all over and was very tasty, he said. 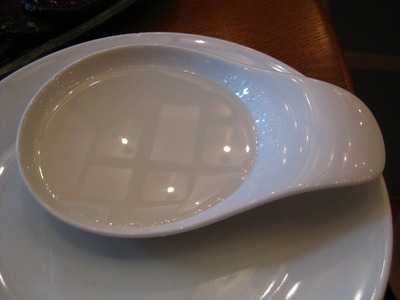 It also came with a small dish of what he said was rosewater (but really, orange blossom) syrup.  He used this sparingly on the katayef, and still enjoyed it thoroughly.

I have to say, I was impressed that without fail (minus that croissant/herby thing in the bread basket), I enjoyed each and every single one of these dishes.  (Yes, I told Chef Massoud this to his face, and he laughed at my bluntness… I think.  Or me.)  It isn’t often that I absolutely adore everything in a meal with no exceptions, and coming pretty close is also not an easy feat.  I guess I always find something to complain about or dislike, but this time, I am really hard pressed to tell you that I disliked anything – even the herby croissant wasn’t bad, per se, just not pleasing to my palate – someone out there likes how that tastes.

Yvo says: I highly, highly recommend brunch here – I already want to go back.  Though you may initially think $25 is way too much for brunch, after you see what you get for it – after you eat it – you will realize that it is totally worth it.  The ingredients are top notch and everything tastes so good (we opted to add on the hommus and the bread basket, but you’d definitely be full just ordering from the prix fixe menu), you’ll find yourself wishing for extra stomach space so you can eat more stuff.  Especially the knafe dessert, which I was too stuffed to sample, but it has my name on it and I’m going back for it… oh yes indeed.  I will be back for that two-person-knafe… nom nom nom
highly recommended brunch