Back in April, I got a Groupon email advertising a deal for Bian Dang inside Food Gallery 32. The deal was for $5 you get Taiwanese Fried Chicken or Pork with Rice, Sauce, and Dumplings. Considering this would normally cost $11, it was a great deal. You may remember the last time I had Bian Dang I enjoyed it very much. The deal seemed to be too much food for one person, so instead of going during lunch, I waited until CT was around so we could go for dinner. I figured if we get something else from one of the other stalls, it should be more than enough food for a casual dinner. 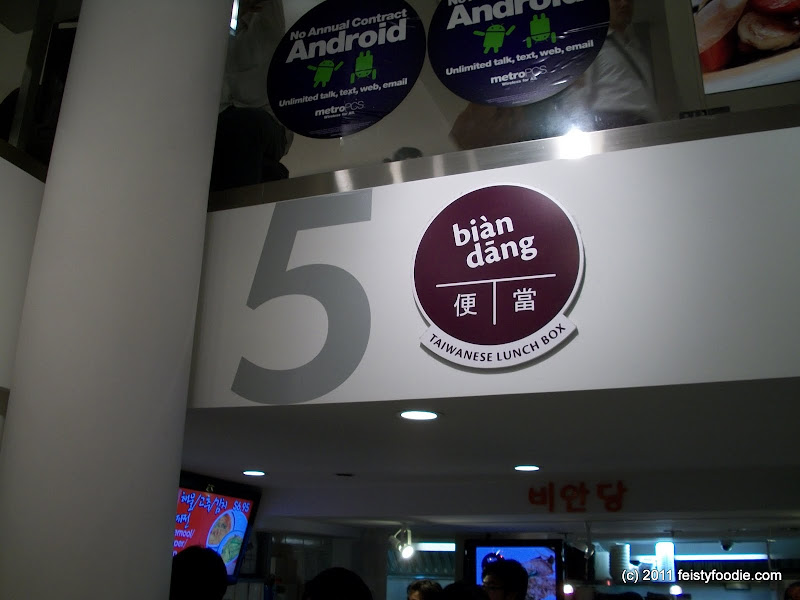 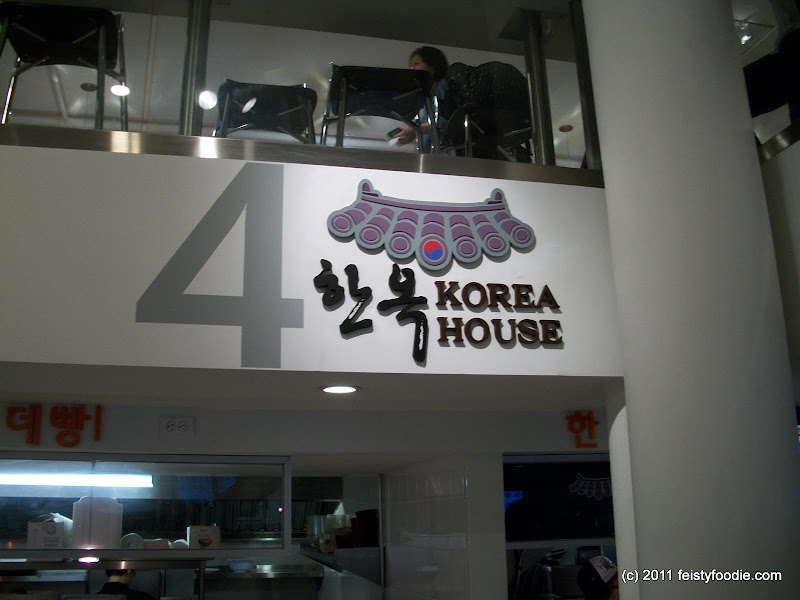 CT decided she was in the mood for kalbi, so we got a small order of LA Kalbi($9.99) from Korea House formerly known as Hanok. I wonder why they changed the name of the stall? Hanok actually refers to a Korean style of house. An interesting side note is that we have begun watching “The Kimchi Chronicles” on PBS which is show hosted by Marja Vongerichten(Jean Georges’ wife) which is all about Korean food. A recent episode was discussing kalbi and we learned that LA Kalbi is possibly named for Los Angeles because the short rib may have been cut across the bone first there. Yvo actually went to the premiere party. 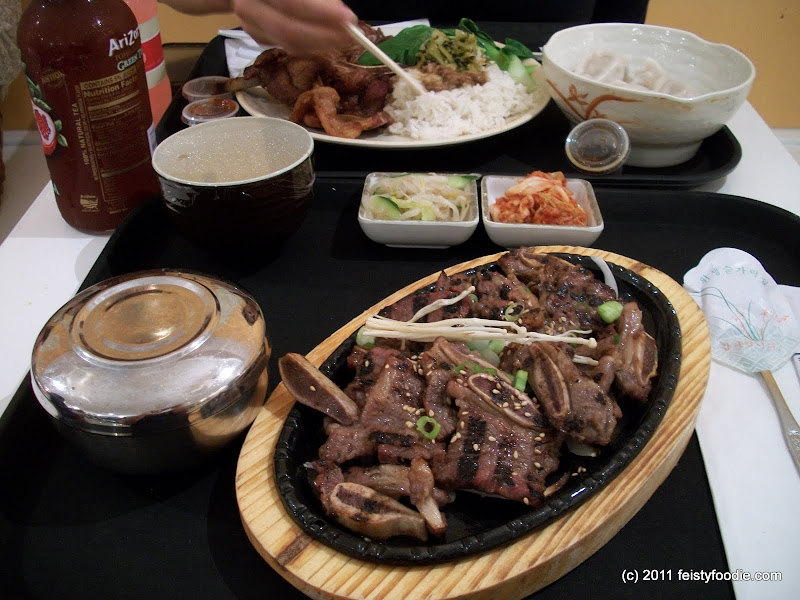 In addition to a nice portion of short ribs, it comes with a bowl of white rice, mung beans, kimchi and soup. I am not really a fan of kalbi as it is usually too much “work” for it to be enjoyable to eat. The meat is still on the bone and toughens up easily, which makes eating with chopsticks all but impossible for me. While the meat has some nice grill marks and flavor, it was super chewy. Keep in mind this was “fast food” so the quality and care isn’t as high as a sit down restaurant. The kimchi was pretty sour and spicy, which was good to eat between bites of meat. The mung beans were nice and crunchy. Since it was a warm, humid night we both passed on the soup. 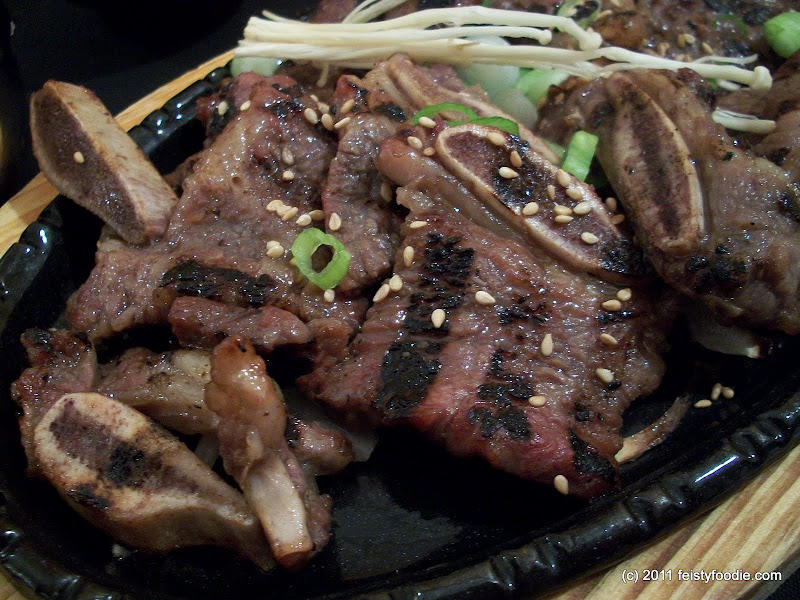 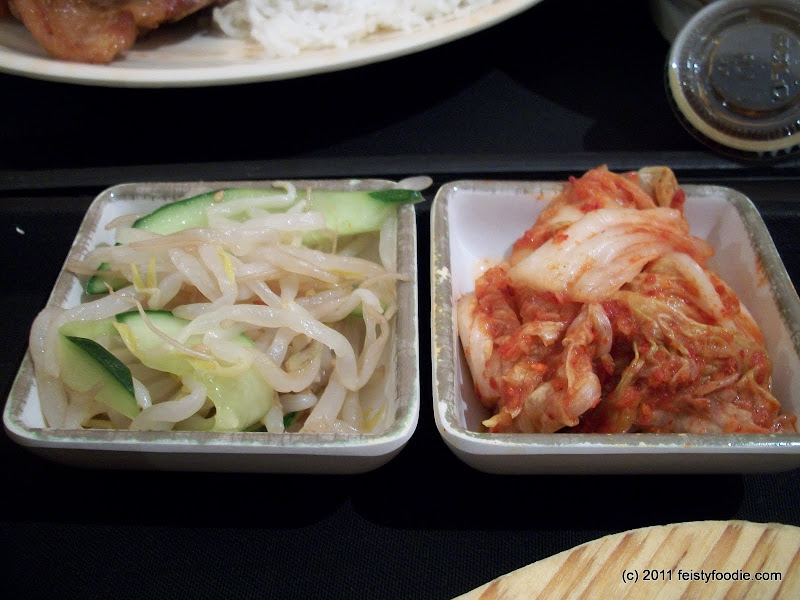 When we ordered the pork chop over rice from Bian Dang, we learned that we could substitute the dumplings for spring rolls. Since neither of us had their dumplings before and we already had our minds set for them since that is what was listed on the deal, we stuck with the dumplings. Unfortunately, the dumpling wrappers were pretty thick and became gummy. The innards of pork and chives were ok. I wouldn’t recommend getting the dumplings from here. 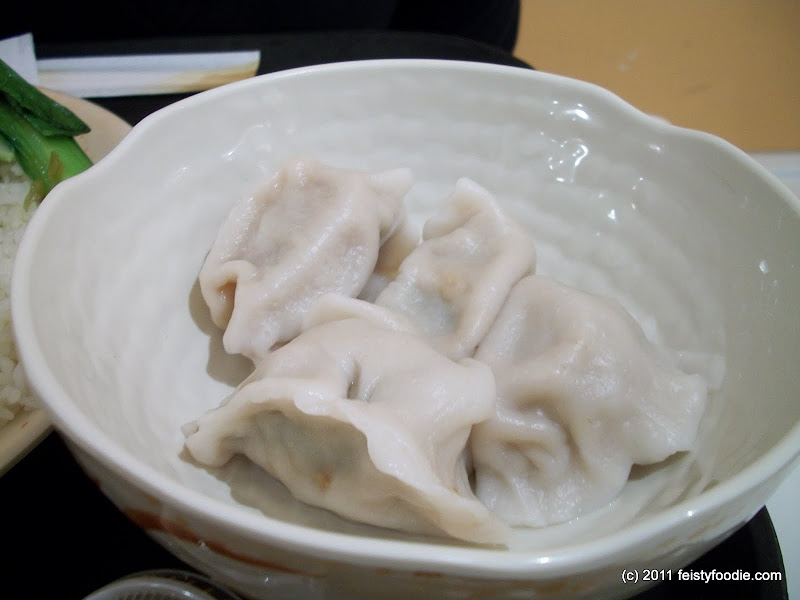 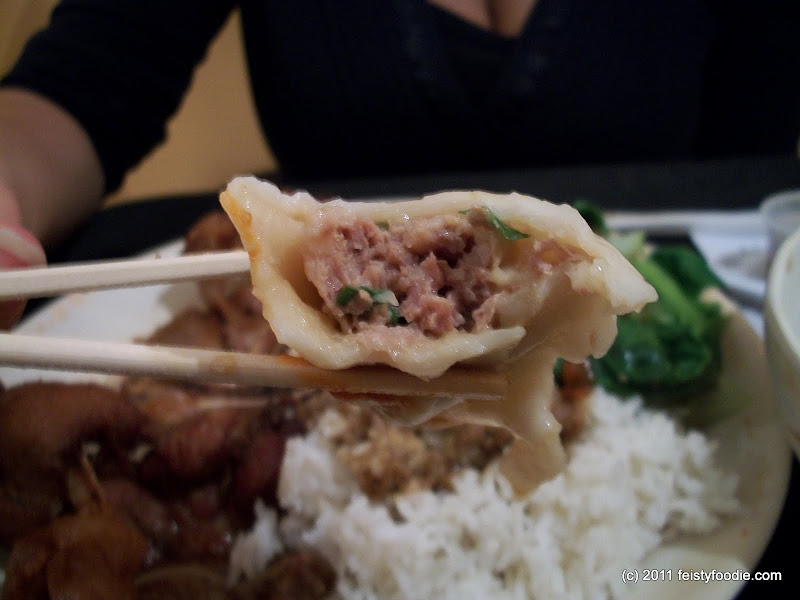 I got the pork the last time we were here and got it again this time. Looking back at the visit, the pork was juicy and lightly fried. This time it was fried a lot longer, so while crispier, it wasn’t as moist. The chops were also strangely cut and once fried ended up like a contortionist, which made cutting them with a plastic knife and fork not the easiest task in the work. 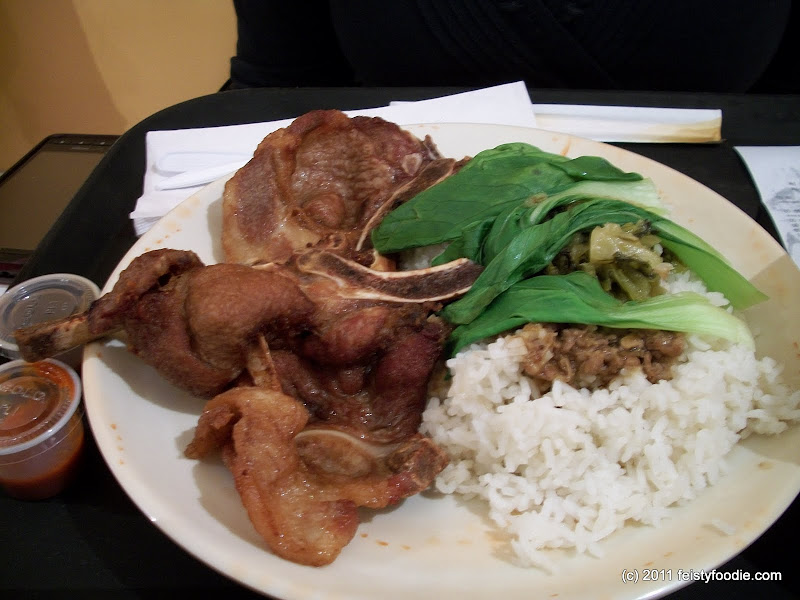 The pork sauce and pickled greens were good as usual. 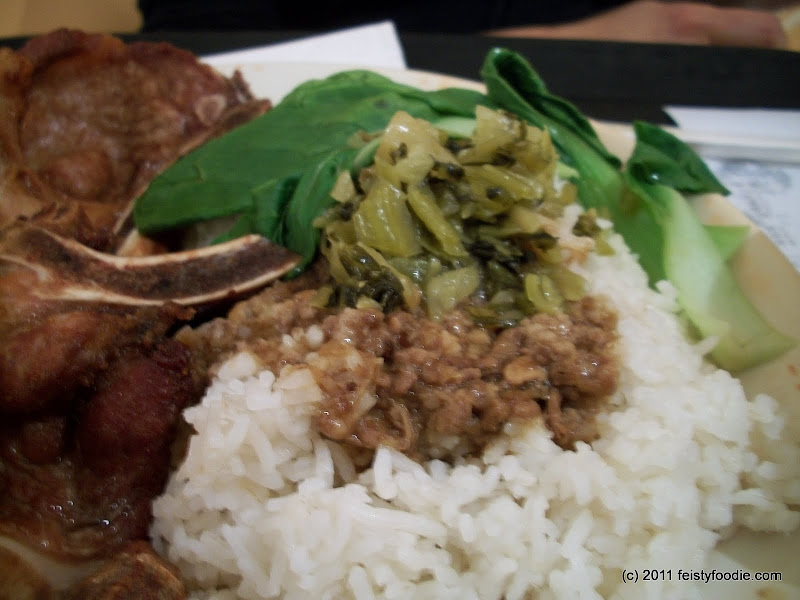 Although we didn’t miss it, the order didn’t come with soup like last time. I wondered if they no longer serve soup with an order or if it was due to us using the Groupon? Considering all of it cost $5, there were no real complaints from me.

We also got some drink from the coolers off the side, which need to be purchased for separately. I got a Pomegranate Green Tea, which was actually made by Arizona Tea. I had not seen this flavor offered by them before, but it was very good. Tart and refreshing. They also sell a couple varieties of Mash soda, which CT has been a fan of for a while. She got the Citrus Zing this time around and enjoyed it very much. I hear it also makes a great mixer. 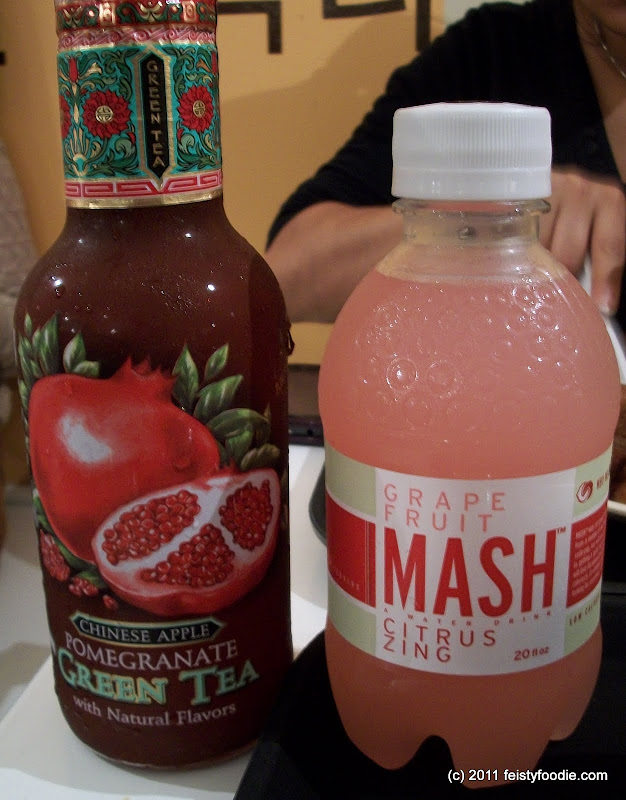 All in all, Food Gallery 32 is still a great place to visit if you want to try a bunch of different Asian foods all under one roof. While quality isn’t the highest, the prices are reasonable. For the most part Bian Dang is a good option, but consistency appears to be a problem. Food Gallery was pretty busy on a Friday evening, so I don’t think we have to worry about it disappearing anytime soon. I have a second Groupon to use so I’ll be back soon.