During one of the multitude of snow storms that has plagued NYC this winter, CT was working from home. Since my office is close to her place and I made it in to work that day, I invited her out to lunch to check out the new K-town food court, Food Gallery 32. Our friends over at Midtown Lunch have posted about it a couple times with some mixed reviews. I figured it would be best to go with someone else the first time in order to try more things.

Early reviews claimed that it was difficult to order because you had to walk to each counter to see their menu and then go back to the front cashier to order and pay. They now have paper menus available to see all of the offerings in one place. It was still easier for us to walk to each counter to see the different options. You are given a buzzer for each place you order from, so if you want to try a bunch of different things, you will have a bunch of buzzers to carry around.

Since this was an impromptu lunch, all photos were taken with CT’s smartphone. Not bad for a phone.

CT decided on the Gop Dol Bibimbap($8.95) from Hanok. I thought it a bit risky to get hot stone pot bibimbap from a food court especially since we have had one of the best versions in the city at Han Bat a number of times. It was served in a true hot pot with the appropriate protection and warnings since you have to carry it yourself to the dining area. Unfortunately, the rice didn’t get anywhere as crispy as the Han Bat version. At $9 it is cheaper than Han Bat, so it is expected to not be as good. It also came with a soup and two banchans. 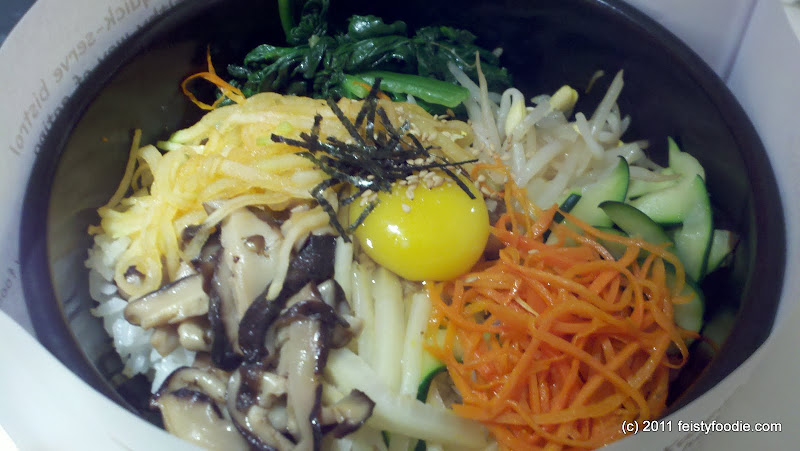 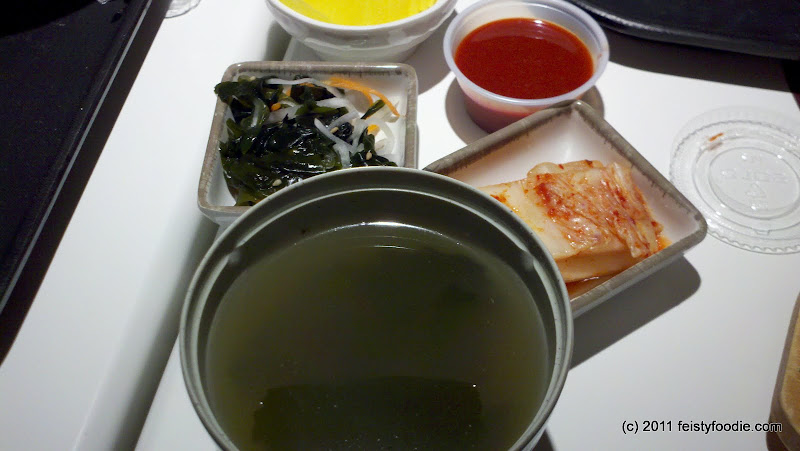 CT says: Was it the best bibimbap ever? No. But it was pretty good for what it was. I wouldn’t expect it to be the same as a restaurant hot-stone, but it was hot and I got a little crunchiness in the rice. Plus the value, when it come with soup and sides, is pretty good. The soup was ok, standard american-miso soup. I didn’t actually try the banchans since I filled up on my main meal and soup. My only complaint would be that there wasn’t much meat in it. I only noticed a few pieces of beef. Still, I would get it again.

I haven’t had NYC Cravings(bian dang) since the truck parked near my office last year. I had a craving for it, so I got the Fried Pork over Rice with Pork Sauce ($8). CT wanted a tea egg, so we added that on for $1. When we picked up the order, we learned it came with quite a large soup. There were some wontons in there, but their filling was minimal. The dish came with two good sized chops over a mound of rice with the famous pork sauce and pickled greens. It was just as delicious as I remember. I barely touched the soup as I was already getting full. 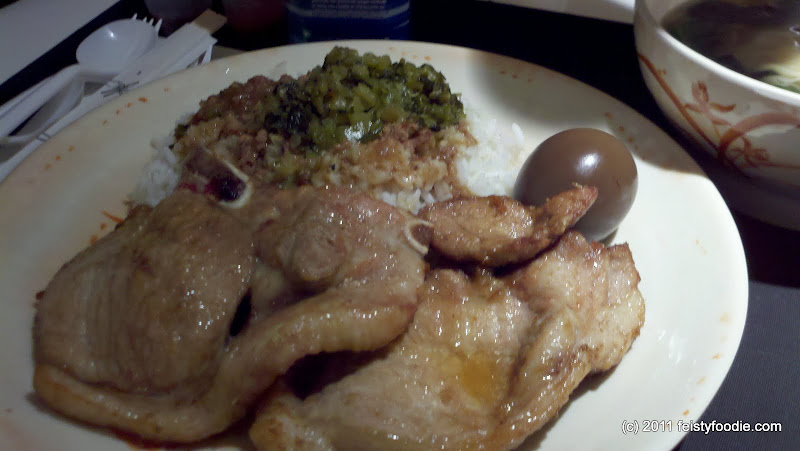 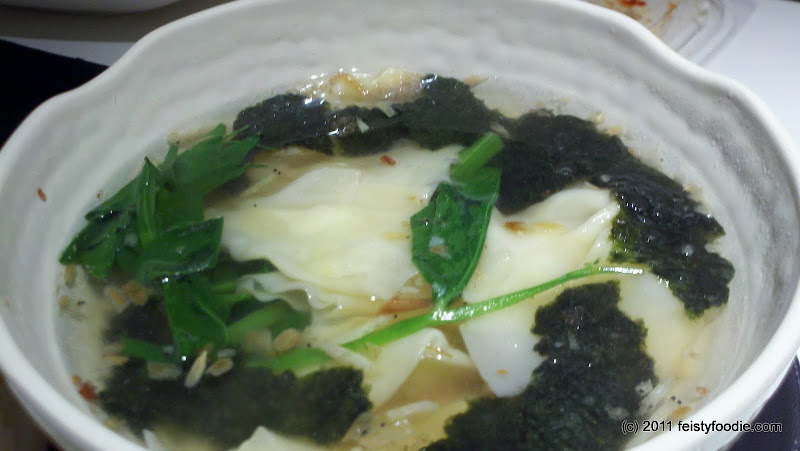 I also decided to get an order of rice balls from O-de-ppang!(1 for $1.50 or 3 for $4) I wasn’t sure if I could mix and match since the cashier’s English skills were that good, so I just ordered 3 spicy tuna. I actually waited near the counter for this and was happy to see that the rice balls are made to order. They were small and heart-shaped, but still worth it. The tuna wasn’t very spicy, but it was spread evenly throughout, which is not always the case when it comes to rice balls. 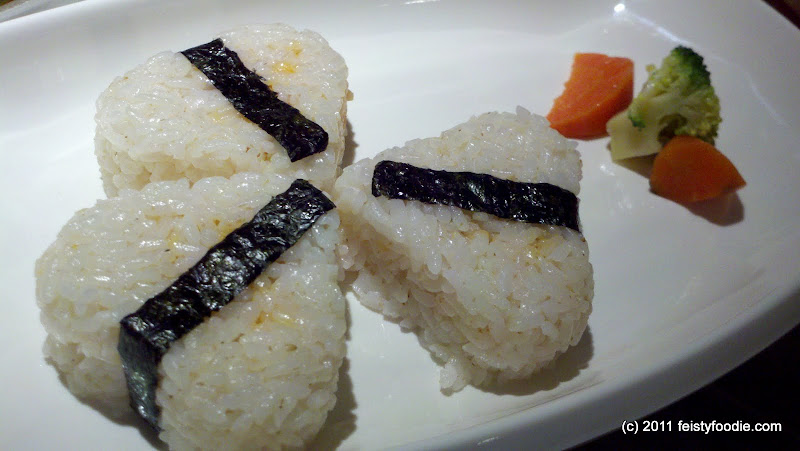 CT says: I was very happy with these rice balls. I really appreciated the evenness in which they spread the filling. I hate getting a huge bite of just rice followed by a huge bite of just filling. I also though the hearts were very cute. 3 for $4 seems like a pretty good deal too, especially considering how much filling was given compared to other places.

We each got small bottles of Tea’s Tea Green/White for $1.75 each. I don’t buy it too often, but it seemed cheaper than what most delis sell it for.

There is also a Red Mango in there. As we were getting close to finishing, one of the workers came around with free samples. We got caramel and pomegranate. I am not a fan of frozen yogurt as it tasted too sour for me, but this was actually quite a good way to end our lunch. 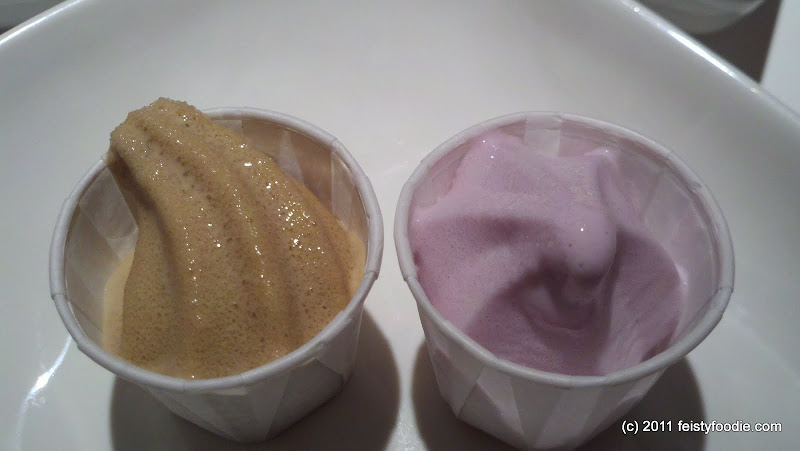 CT says: I’m a big fan of Red Mango – I like the tartness of their yogurt. Both flavors tasted good to me, but in the midst of yet another snow storm, I was not about to eat more than a tiny cup of anything with “frozen” in the name.

All in all, Food Gallery 32 is a welcome addition to K-town. While the dishes are not the best in the area, the convenience factor and price more than makes up for it. I will definitely be going back in the future to try out other menu items.