Last week, I was in a kimbap mood. I knew I wanted fresh kimbap, so Woorijip and its pre-made offerings were off the table. I was planning on going to E-mo, the tiny hole-in-the-wall shop to shop to support my Korean aunt that owns the place, but also thought about making a return visit to Food Gallery. One of the stalls there, Boon Sik Zip, offered a couple variations of kimbap. After some consultation with the experts(CT & Yvo), I decided to risk it at Food Gallery. Since one order of kimbap is not quite filling enough, I also decided to treat myself to a pastry at the newest branch of Paris Baguette. 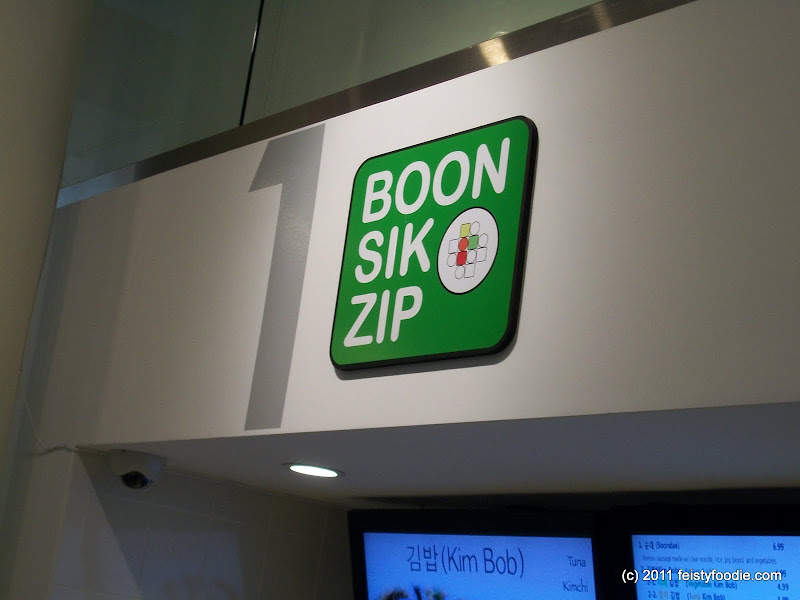 I went with the bulgogi kimbap ($6). I saw a sign that they had fried squid and fishcake on a stick for $1.99. That sounded too good to pass up, so I got that too. 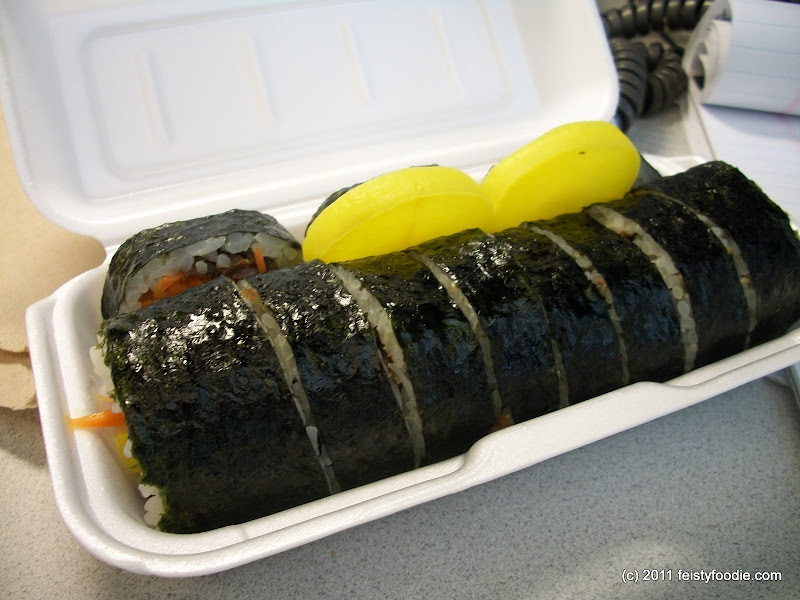 After ordering at the separate cashier(all of the other stalls now have their own cashiers, except this one), I waited nearby and watched the cooks make my lunch. I noticed that the chef took a pile of bulgogi (marinated Korean sliced steak) and put it on a plate to heat up in the microwave. I found that a little strange as other kimbap places usually use room temperature or cold bulgogi as the filling. After placing the rice on the seaweed and topping with bulgogi, the other usual ingredients were added on top(carrots, pickled radish, etc.)

When I get kimbap from Woorijip, I usually douse it with hot sauce to kick up the flavor. Since this was my first time having kimbap from BSZ, I decided to eat it au naturel. The bulgogi was very tasty with just the right amount of sweetness. It was perfect in the kimbap with the mix of flavors and textures from all the different ingredients. The rice was also very fresh, which is not necessarily guaranteed when getting kimbap. It definitely stands up to E-mo even if it they were a little more “corporate” but also of note is that they cost the same. 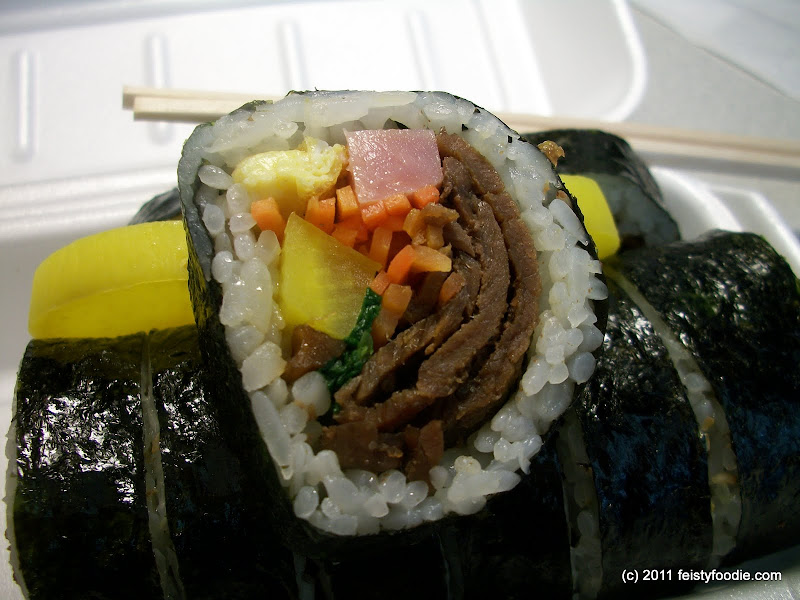 The kimbap also came with a side of fishcake soup. There was one lonely piece of fishcake in it. The broth was bland, but useful in warming up on a cold day. 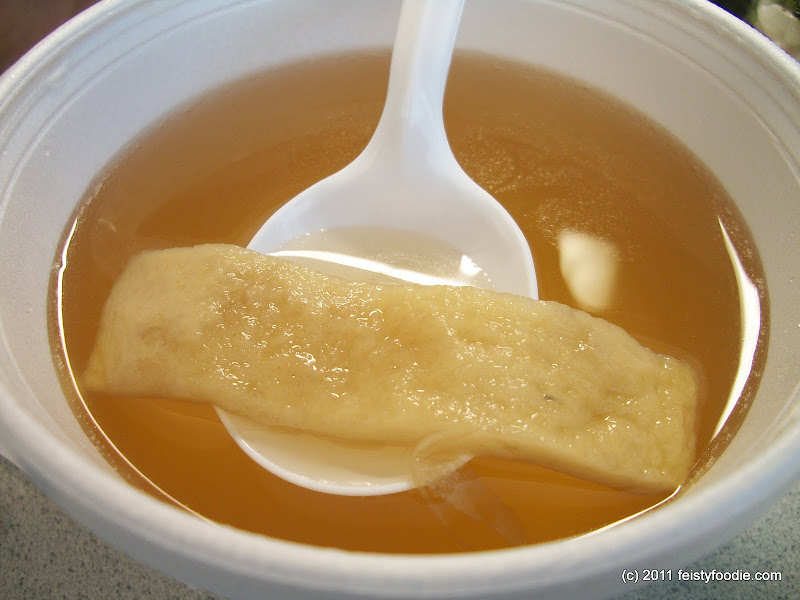 I am 95% sure that the fishcake stick was simply heated in the microwave and topped with some ketchup. I believe there may have been a bit of a language barrier with the cashier, so there was no fried squid with it. It was actually pretty tasty. No real surprises; simply chewy fish cake on a stick. The ketchup added some moisture and sweetness. This could be a great alternative to meat on a stick from one of the hot dog vendors found on the street. A good snack or in my case a nice appetizer. 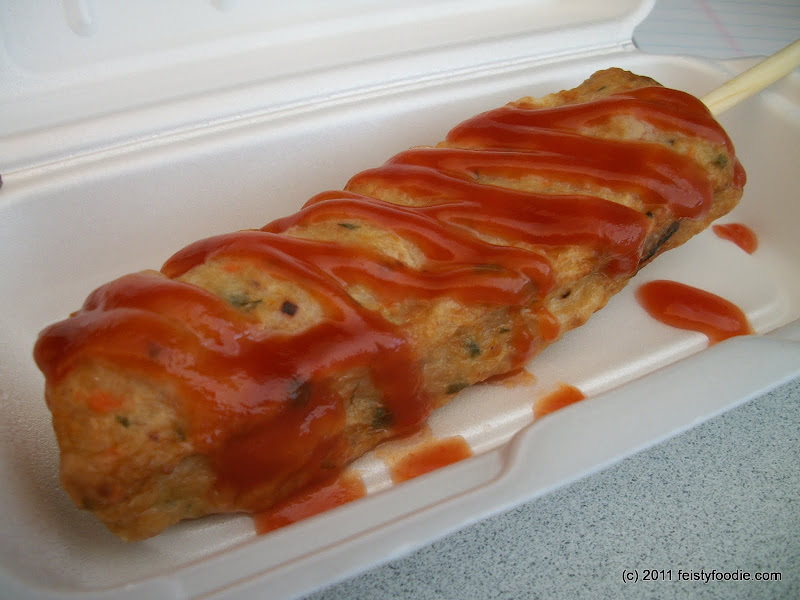 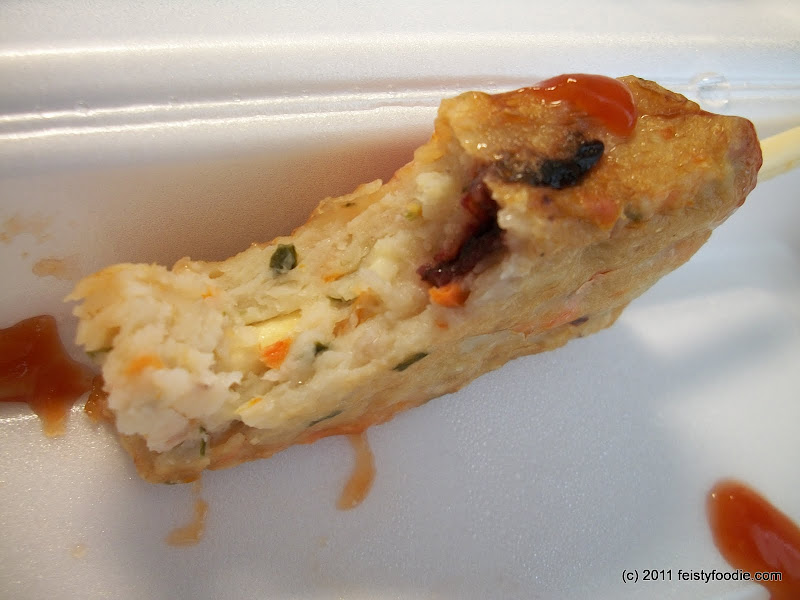 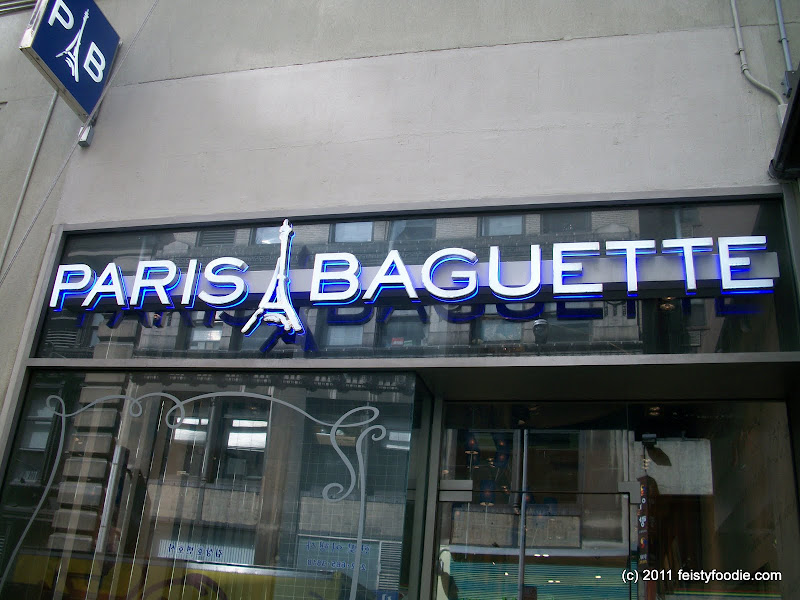 What would lunch be without some dessert? Paris Baguette is a Korean bakery chain that opened up in K-town last fall. I have been a fan since they have an even mix of sweet and savory pastries. What’s even better is that most of the individual portioned items are less than $2 each. This time around I went with the Chocolate Cream Bread ($1.50). It was a semi-sweet roll filled with chocolate cream, yup as advertised. The chocolate cream was made with dark chocolate so it wasn’t overly sugary. It was the perfect complementary end of a savory lunch. 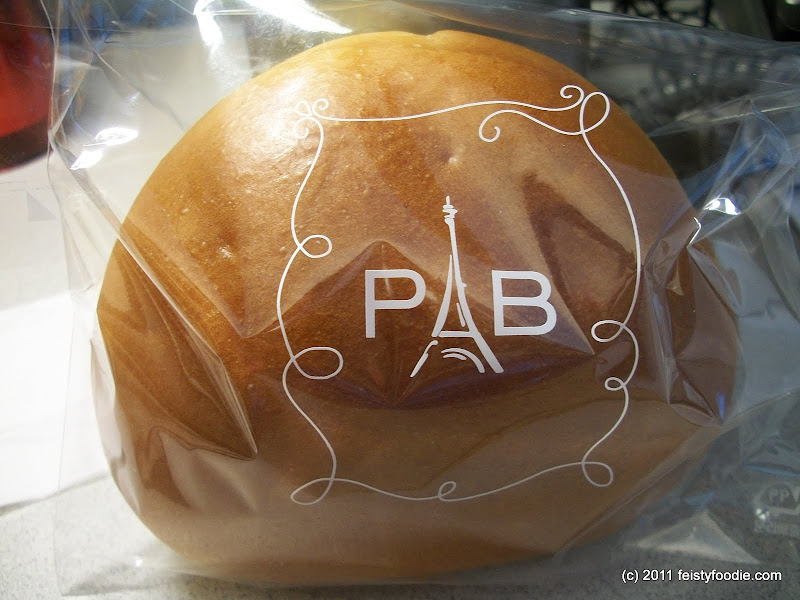 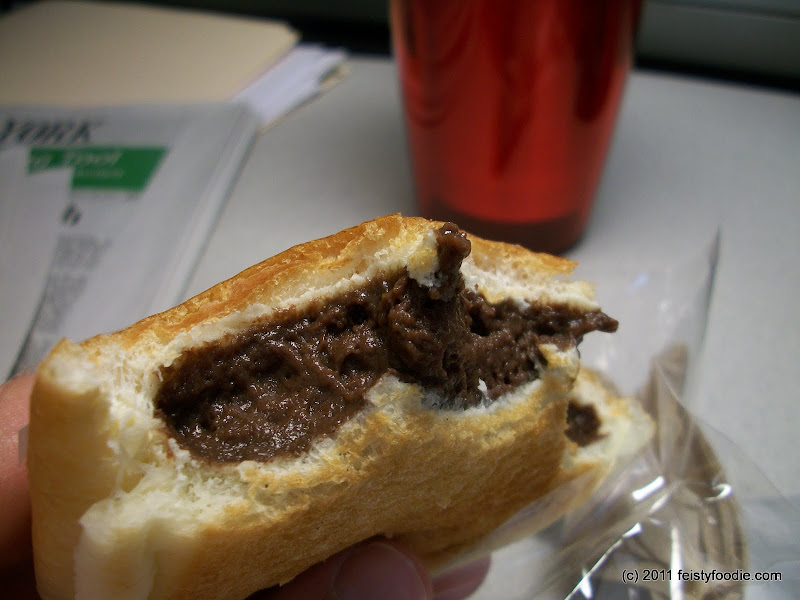 All in all, Food Gallery is turning into a great addition to K-town. With so many stalls, you could eat something different there everyday. I am glad I took the risk at Boon Sik Zip and would definitely be interested in trying some of the other kimbap flavors. Paris Baguette is also a great new spot to fulfill any of your baked goods needs.