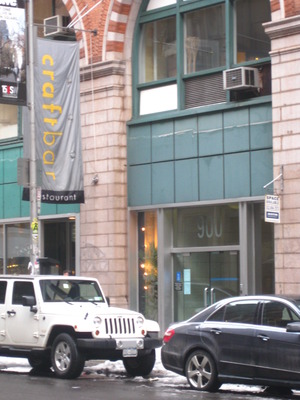 My BFF recently asked if I wanted to have lunch and gave me a list of ideas where we could go.  (Ironically, perhaps, when I eat with friends, I generally refuse to pick a place because I feel responsible if the place sucks.)  One of the ideas she mentioned was Restaurant Week.  I mention this every time I write about Restaurant Week: I never make a point of going each time it rolls around, but someone inevitably asks me to hang out during that time and suggests it.  I’m agreeable so I tend to wind up going to at least one a year.  Not a big deal usually, though some have been horrible… I also mention every time I write about Restaurant Wweek that I’m disillusioned with the idea of eating at top restaurants inexpensively.  It seems that the quality during those two weeks dips, and service is always rushed from the influx of diners, and the restaurant’s star dishes tend to not be offered… meh bleh meh!

But I’m agreeable.  Mostly.  I complain later if I need to 😉 Oh one more thing to note: if a restaurant doesn’t list its restaurant week menu online, there is zero chance I will go in blindly.  I don’t even go to most restaurants for regular meals without looking first, and Restaurant Week… well, let’s just say I never forgot the experience of going to a steakhouse for Restaurant Week and there not being steak on the RW menu, k?

And so after looking at menus, we settled on Craft Bar… where I’ve actually been before but totally forgot because it was pretty middle of the road – with excellent service. 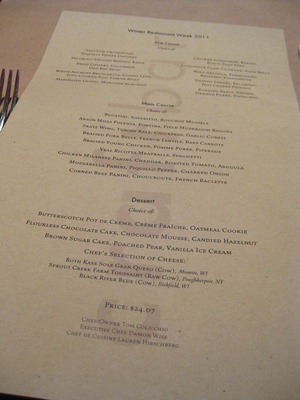 My stupidity (sorry again!) led to me being about 40 minutes late for our reservation, but when I arrived, I found a serene LTS sitting at an intimate booth facing the rest of the dining area, so I squeezed into my seat next to her, apologizing profusely.  Our server appeared immediately and greeted me, and he joked about it being okay since, by profession, he was a ‘waiter’.  Ha.  Corniness aside, he was fabulous, really friendly, joked with us, attentive when we needed and invisible when we didn’t… and when I asked him to make recommendations on the menu, he totally chose what I already wanted (without me telling him first), saying those were the best dishes on the menu.  Hehe. 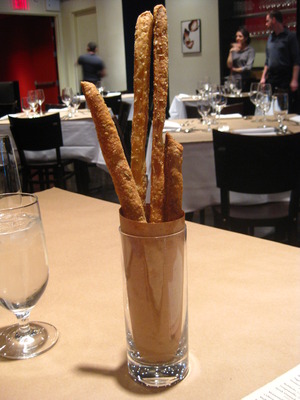 So I finally got to try those breadsticks that Endless Simmer mentioned so long ago – and sadly, both BFF and I found them way TOO crisp.  The seasoning was great, but the sticks were so hard that at one point I worried I was going to break my tooth!  BFF heard the crack and looked at me with concern, but it was just the breadstick breaking.  Eek! 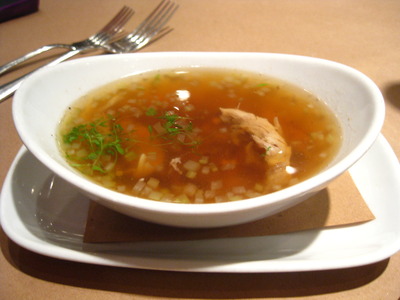 For BFF, chicken consomme: it was a very, very cold day, and soup seemed to be the perfect choice.  She said it was very good, but I didn’t try any as I was busy with my own starter. 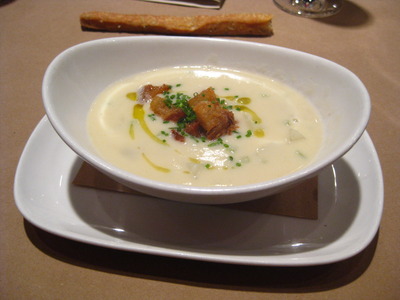 You can see my abandoned breadstick in the background… Cherrystone clam chowder!  I love clam chowder, and this was topped with crispy pork belly bits.  YUM.  The soup itself was creamy, rich, and excellent.  My own version is markedly different, but I wouldn’t say better… just different.  Both yummy. 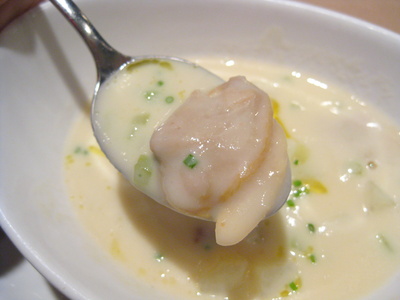 One of the whole cherrystone clams in my chowder – there were two.  Sweet, juicy, tender… yum!  I liked that though there were only two clams in the bowl of soup, it didn’t feel like too little (and eaten with the crispy pork belly, it felt downright decadent), but also that they didn’t ‘try to make up for it’ by flooding the rest of the chowder with excessive potatoes, vegetable matter… it felt just right. 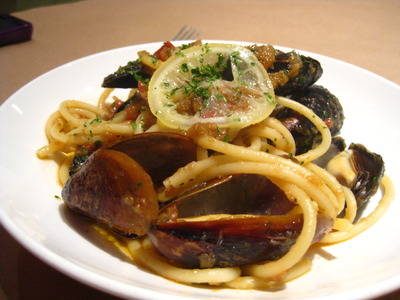 For BFF’s main course, she chose linguine with mussels.  I know she enjoyed the dish, though I didn’t try any of it.  She mentioned that the mussels were cooked perfectly. 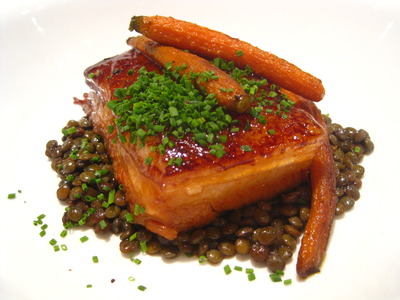 Being a glutton, I chose more pork belly: the braised pork belly with lentils and baby carrots.  The first forkful was absolutely glorious: a bit of creamy fat coating the mouth, a bit of meat pulling apart into fibers, and all the savory goodness one could possibly want.  I was in heaven, though I admit that as I progressed through the dish, the lentils definitely became more important to eat in order to help the fat coating my mouth not overwhelm.  It’s a slab of pork belly; what do you expect? 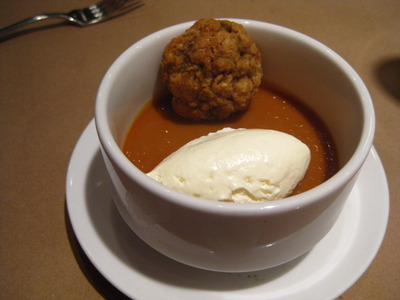 BFF chose the butterscotch pot de creme with creme fraiche and and oatmeal cookie for her dessert.  I tried some of the pot de creme but don’t remember being moved as much as she was… she was in heaven.  I was pretty surprised she opted out of the chocolate dessert, since she’s pretty big on chocolate too. 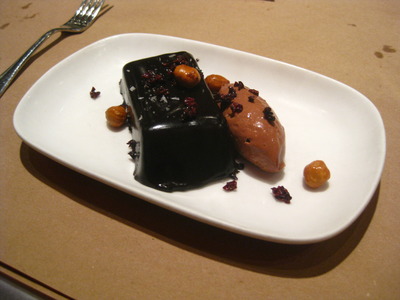 So I went with the chocolate dessert. 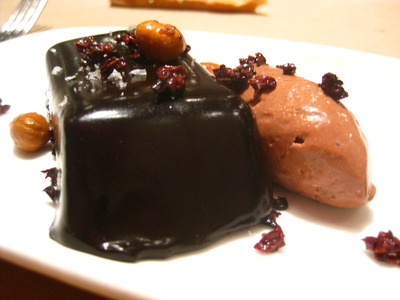 Chocolate custard tart with malted milk ice cream… the chocolate was so rich and fudgy, I ordered coffee and put hardly any sweetener in.  Perfect, perfect end to a great meal.

Yvo says: Honestly, I felt like we got our money’s worth.  For $24.07 all that food (drinks were additional), and it was enough to stuff me soundly, plus it was very tasty, quality… I was very happy with the outcome here.  Sometimes you roll the dice and you lose, but this time, we picked a winner, and I would happily tell people to go here for Restaurant Week without hesitation.  I don’t know if I’d be happy with the same amount of food at regular price, but for what we paid, it was an absolute steal.  And afterwards, we went across the street to Fish’s Eddy for 99c silverware.  Win.
recommended for Restaurant Week; great service, terrific food