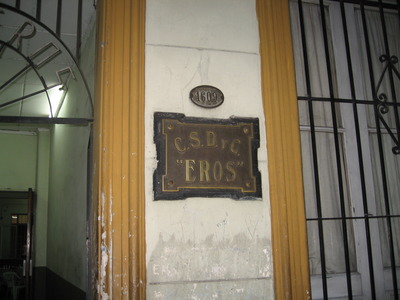 The thing about adventure is that sometimes you have to seek it, sometimes it seeks you.  Sometimes it’s dangerous, and sometimes it’s not; sometime it’s totally worth the risk and other times… well, you get the picture.

But it is always a good story later.  StB will attest to this.

On our second night in Buenos Aires, we were debating between two restaurants somewhat close to each other.  One was a safe choice, not steak, something bland and uninteresting that I genuinely cannot recall right now.  The other was steak, according to the guidebook, it would only be 6 pesos, and it sounded… well, a bit more daring.  A bit more on the edge of town, not in the center, somewhere off the beaten path.

I admit I gunned for this choice.  I didn’t bully anyone; for the most part, I’m an easy travel companion because I’m generally game to whatever everyone else wants to do or eat.  I generally have one or two “I really want to do/see/eat that” but it appears on most trips, these get pushed aside for various reasons, and I don’t make a big deal about it; it happens.  I just said, “That sounds more interesting, let’s check it out,” and we wound up eating there.

The name of the place evokes images of the Greek god of love & lust (popularly known by his Roman name, Cupid), but the guidebook assured us this was not the case.  When we arrived, we realized even more how not lovely or lusty this place was – the above picture doesn’t capture it.  Barely a sign, we walked past it before doubling back (since we had the address) to this tiny plaque that simply reads EROS.  When we walked in, it looked like we were walking into a gymnasium; there was a huge soccer practice area with a glass separator complete with sweaty Argentinian men playing soccer.  There was, however, a few long tables set for a meal, and on closer inspection, there was a further inner door behind which we could see people eating.  We decided to go in, with StB and I leading the way, HB and MB/PB perhaps hesitating for a minute before following. 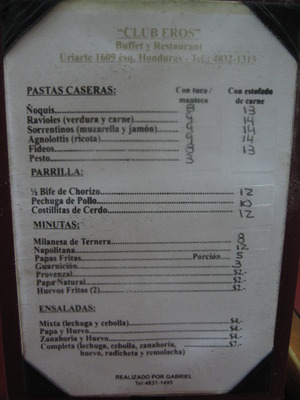 I wish I’d taken pictures of the place, but put it this way: it looked much like your grade school gymnasium slash auditorium, or at least like mine did, complete with faded greenish linoleum floor tiles, random banquet tables stuck around, thin paper napkins, and was only missing the janitor that didn’t speak English who was constantly mopping the floors, making the entire place reek of ammonia.  Well, close enough.

Though the place was fairly empty when we got there, what people were there were all locals.  Pretty good sign, if you ask me.  Which you did, since you’re reading this…  Anyway, it was about 9 pm (according to the timestamp on my photos) when we got there; when we left at least an hour later, the place was packed with even more locals.

If you can read the menu above, you’ll see there’s basically very few choices.  Our waiter barely grunted at us; three of us ordered bife de chorizo which isn’t chorizo sausage, it means steak a certain way.  StB tried to order pasta, there are 6 choices on the menu above; after some Spanish back and forth that I didn’t understand (my Spanish is by far the weakest in the group, having taken the least of all of us – one year during senior year of high school which meant very little showing up in class – MD/PB has a lot of patients that speak Spanish, so she had the best Spanish), StB revised her order to bife de chorizo as well.  Apparently there was only one type of pasta available and she didn’t want it. 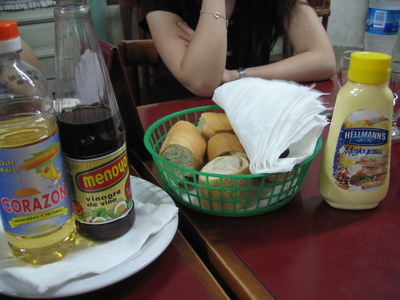 This was on every table.  Before you arrived.  If you were lucky, and sat at a table that had just been cleared, you might get a new basket of bread (though I didn’t look to see if this was true; perhaps they just left the basket there); but notice the mayo- not even cold- there was no AC in the place, just weak fans- but I had some mayo for my fries, and I didn’t get sick.  (There was no ketchup.)

We also attempted to order dos ensaladas completa but due to a mispronunciation and our waiter not just completely not caring, but also being two shades away from deaf, he kept telling us papas fritas? and we thought he was just trying to convince us to order more food, so we just nodded.  Our error became apparent when he later brought us two plates of fries, and no salad.  Ah well, you live and learn.  It wasn’t worth the hassle and besides, deep down – oh, not even deep down, on the surface, we all love fries. 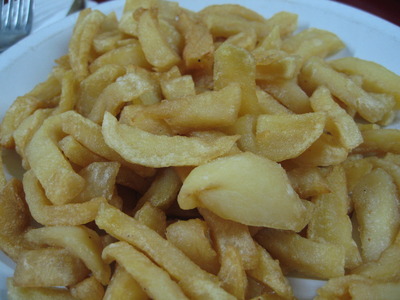 The fries were alright, needed salt and a little something to dip in, but were tasty either way.  Hey, deep fried potatoes, pretty hard to go wrong in my opinion… 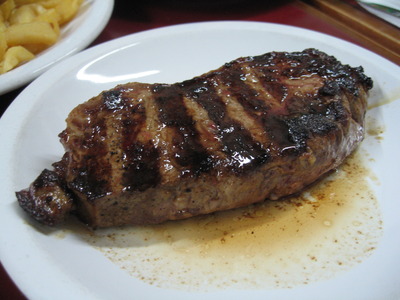 Our steaks- forget about ordering your steaks cooked to a specification; these were fully cooked.  I wouldn’t say well done, rather slightly on the plus side of medium; mine was still juicy and quite tasty and honestly, for 12 pesos – which roughly translates to $3USD – can you complain?  WOULD YOU?  I definitely enjoyed my steak a lot, though it did need a lot of salt (in fact, very strangely since I never add salt to my food, I doused mine in salt, to my companions’ horror, though it still didn’t taste like it was over salted.  Very strange, since they said their steaks were all well-salted… did they skip mine and double-salt someone else’s with the actual salt?  Was I only sprinkling dust on mine?). 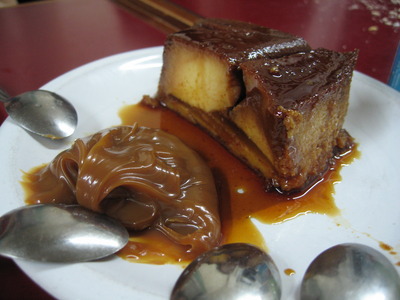 We finished off the meal with a flan-like creation, complete with dulce de leche (a milky caramel “sauce”) on the side.  It was sticky and delicious in that good way that only cheap and good food can feel.  Great choice by MD/PB.

Our meal – which included bottled water for each of us, not shown- came out to 84 pesos.  Which comes down to 21 pesos a person, which comes to approximately $7 USD!  I was thrilled with our meal in that aspect: best value for the overall experience as well.

Yvo says: For what feels like a truly authentic experience in Argentina, you must go here.  It’s not that far off the beaten path to make you feel nervous- we drove right through a super trendy, populated area just a few blocks away, and had no trouble hailing a cab afterwards to head back to our hotel- but it is far enough to make you feel like you’re experiencing the real deal, and you can’t beat the prices, honestly.  Even buying these ingredients at a supermarket and making it at home would be more expensive!
highly recommended, overall experience, value, and taste