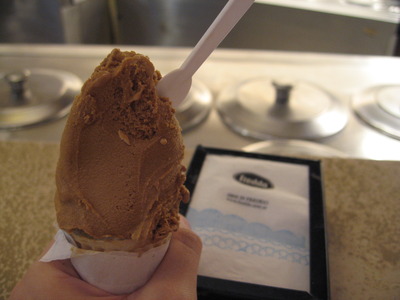 After hours of shopping, we girls wanted a little something sweet.  HB’s coworker had just visited Buenos Aires about a month ago, and had insisted we go to Freddo, a chain helado (sounds like gelato, but is actually Spanish for ice cream) shop.  He strongly recommended dulce de leche and we all got variations on this (mine, above, is straight dulce de leche; two of the girls got dulce de leche con chocolat which had huge chocolate chips as well, and one girl got something I forgot).  The funniest part was that looking at the price list, which was different cones with prices next to them, I wanted a waffle cone which was the highest priced one.  After I ordered, I discovered that the prices were actually sizes and I’d ordered a huge one- the above is the smallest you can get, for something like a couple of pesos!  I quickly ran back and told the guy that I wanted to change the size since I hadn’t realized; there was a language barrier as he didn’t speak English and I didn’t speak Spanish, but he begrudgingly gave back my money to my relief.  There was no way I’d have been able to finish even 1/10th of the large size – even the above was pushing it.

While deliciously creamy and cold, we all agreed that each flavor was way too sweet.  I’m not big on sweets in general – every now and again I like to have something sweet, and I’m a sucker for certain desserts, but this was really overkill.  HB even actually wound up scooping half of hers off the cone and throwing it away so she could get to the wafer cone faster, which to all of our disappointments (save mine, because I don’t like wafer cones anyway and didn’t expect much to begin with) was super stale and not very tasty at all.

Yum- if they had smaller sizes, these are priced perfectly.  A little something sweet! for after eating all those steaks.