When I saw the invitation in my inbox, I about lost my cool. Holy crap. I get to attend a cooking demonstration by CHEF MICHAEL WHITE. Do you all know who he is? DO YOU UNDERSTAND HOW AMAZING THIS IS?!

Well, put it this way: for my 30th birthday, exBF took me to Convivio (RIP). For my 31st birthday, I went to Ai Fiori. Though I had my choice of places, I chose to repeat a place each year that I’d already been to, because I liked it THAT MUCH.

I arrived shockingly early (about 5 minutes), though the event started a bit late. That just gave me more time to grab a seat in the very front and observe Chef White as he interacted with the two chefs he’d brought to assist him. I loved seeing their rapport.

Though I’m still not drinking, I allowed them to serve the wines to me anyway, and indulged by inhaling each deeply. I don’t know if it’s a testament to the excellent wine program at Eataly, but each wine smelled amazing and I desperately wanted to try some – even the red, which smelled like something I would really enjoy (I’m not really a red kind of girl).  The first and last wines were definitely ones I’d enjoy… sigh.

But I can tell you what they were, meant to pair well with the strong characteristics of parmesan:

Before the demonstration began, we were treated to listening to Nancy Radke and Simone Ficarelli discuss the launch of Parmesan.com, a really cool website discussing uses of the cheese in many different applications, offering contests and games and all sorts of cool things. You should definitely check it out!

Then Chef White began the demo. Oh my stars… I learned so much from him. First… he seasons things with parm. Like, instead of or even before salt! Brilliant. 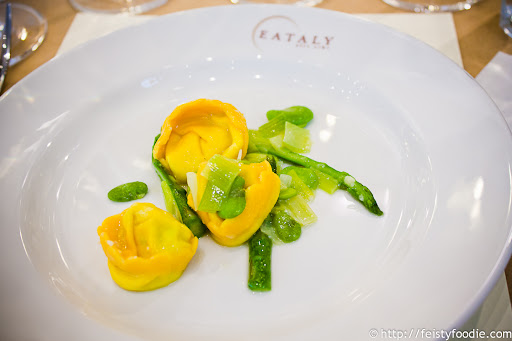 Our first course: whole milk ricotta & asparagus tortelli with fonduta di parmigiano reggiano, was delicious of course. He mentioned that he makes tortelli instead of tortellini (as he demonstrated how to create the shapes) because he has big fingers. Hahaha!

As he prepped the next course, he showed us how he seasons each side of a boneless skinless chicken breast that had been patted dry with the parm first, then patted the cheese into the breast, then into beaten egg, then  flour, then bread crumbs. Not just for flavor but also because that way, the cheese is protected and doesn’t burn and look ugly. I do often have that problem myself with the cheese burning on my cutlets, so this is brilliant!

Another tip that I found great is – after breading the cutlet, tap around the cutlet edges to make it prettier. Awesome!

But even better, as the chicken was finishing up its time frying in the pan, he added a pat of butter. I asked him why, and he said – it adds a nutty taste and also makes the breadcrumbs taste TOASTED. Can you just say GENIUS. (Or you can tell me you’ve known this forever and I’m just dumb. That’s fine. I still think the man is brilliant.)

Our next course was chicken cutlet with prosciutto cotto, parmgiano reggiano and sauteed spinach. Incredibly crisp crust, and this insane sauce ladled on top… just amazing. I was incredibly happy eating this.

I’m not sure if this was the same sauce, but he also demonstrated how to make a quick sauce using a high powered blender and then sent it around the room for us to try. It was like the best alfredo I’ve ever had, but better. Simple too: hot chicken broth, a lot of parmesan into a blender going very fast, and then a drizzle of extra virgin olive oil. AMAZING. 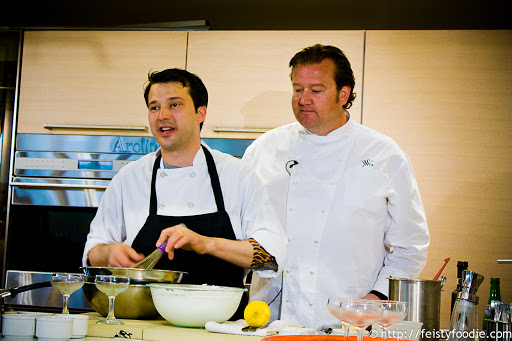 Then, time for dessert. As I mentioned earlier about Chef White’s rapport with his sous chefs being adorable – well, this is his executive pastry chef in this photo – at one point, the executive pastry chef, who was being ballsy and making creme anglaise and adding egg yolks to a hot pot without tempering them, dumped a ramekin of a white granluar substance into the bowl. Chef White said “That was salt!” and almost had him… almost. It was pretty funny seeing his face!

Our final course: white chocolate parmagiano reggiano semifreddo with balsamic glazed strawberries topped with streusel made with butter that was made from the milk leftover from making parmesan. I want to eat that by the spoonful – it’s available at Eataly!  In any case, this dessert tasted like the bestest cheesecake (crustless) EVER, with the parm flavor shining through and the sweetness of everything just elevating it to new heights. OMG. SO GOOD.  His executive pastry chef is a freakin’ genius!

I really enjoyed my time watching Chef White demonstrate and explain dishes to us. It was enlightening and delicious – to be in the presence of genius encourages me to achieve new levels of greatness. Without question, I wanted to just sit there and soak in his knowledge!

In any case, check out Parmesan.com if you get a chance – there are games, recipes, and all sorts of awesome articles for ways to use parmesan – the king of all cheeses!

Please note that while I attended this event courtesy of Parmesan.com, I was under no obligation to post about this event positively or negatively, and received no monetary compensation to do so. Gosh I love Michael White.