The stars all aligned one night, leading to Sean and I being able to meet up at short notice. (This is a long running joke between us… and is hard to explain.) What’s more, it only took a few tries to find a place that had food both of us agreed to eat… though it was at Almond, where I’d previously dined twice (the first time for a press event, the second time finding the food rather mediocre). 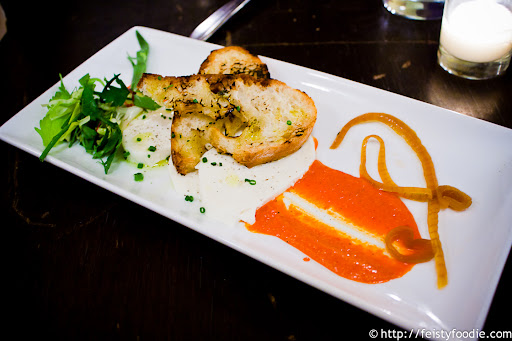 We opted to split an appetizer to start – the homemade mozzarella with piquilli pepper coulis and pickled ramps. Good, fresh mozz that was slightly oozy – I liked it and I think he did too. The pepper coulis added a nice sweet counterpart, too. 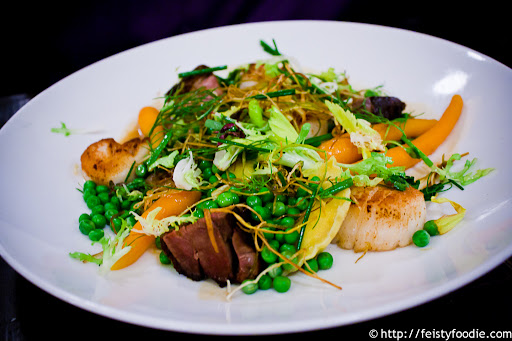 I guess eating with me made Sean feel a little more adventurous; he chose the dayboat scallops and smoked duck breast with English peas, baby carrots and polenta ravioli.  While the dish was a riot of colors and looks really festive, just by looking, I could tell the duck was way overcooked. However, Sean didn’t seem to take much issue with the level of cookedness of the duck, and seemed to like his dish overall.

Since I wasn’t that hungry, I chose the appetizer portion of mussels ($10) and added on frites ($5) just because I could. We both noshed on the frites and they were perfectly fine, though perhaps not worthy of the rave the waiter gave them when I asked about adding frites to my order. As for the mussels… I was much more wary this time as my last experience – just a short while earlier – had resulted in disaster… but I was determined to continue eating the mollusks as I’d just started eating them again after over 10 years of avoiding them (because I didn’t like their texture – always mealy, overcooked, rubbery, chalky even), so I soldiered on. A French bistro must know how to cook mussels, right?

Well, no.  The mussels were mostly just OK – not as plump as I’d had at 5 Burro, not particularly flavorful, a bit bland and … I don’t think they were that fresh. I was just eating them for something to do with my hands as Sean and I chatted about our lives, catching up, and then…

I was probably a good 3/4 of the way into my dish when I pulled one out that looked different. I stuck my fork into the mussel and it fell apart. I’d had trouble with the previous mussels sticking to their shells, not wanting to be removed and eaten, but this one just about fell apart. As I shrugged and moved to toss it into the discard pile – as I said, I wasn’t very hungry, and was really just eating to keep Sean company – I caught a whiff of the mussel. My face must have morphed instantly, because he asked me what was wrong. He declined to smell my mussel, but there was no question that it was flat out rotten.  It smelled like fish that’d been left outside on a July day. It smelled… disgusting.

I had to collect my thoughts before I got the attention of the waiter. I told him that there was something wrong, and as soon as he saw the questionable mussel, he recoiled in horror and said “oh no!” and removed the plate to show his manager. He returned a few minutes later and asked what my suggested resolution was – not offering the obvious remedy – and I said very calmly, “Well, I ate most of the dish already, and it’s not your fault. It isn’t like you can check every single mussel as it comes out. I just wanted you guys to know so you can be more careful in the future, you know?” Because let’s face it: my $10 dish having one bad mussel? it isn’t a big deal (if I don’t get sick).  I didn’t eat the mussel and it wasn’t like they served me a rotten piece of steak or fish, where you should be able to tell pretty easily that something’s wrong.  So I just told him it was fine, no harm, no foul. I didn’t see a point in asking for them to comp my dish, for all these reasons. He apologized profusely, and walked away.

A few minutes later, he appeared with dessert menus and apologized again, telling us that dessert would be on the house.

Being understanding and polite when there’s a problem goes a long way in the service industry. There was no reason to cause a fuss and he didn’t have to comp our desserts, but he did – which also goes a long way. 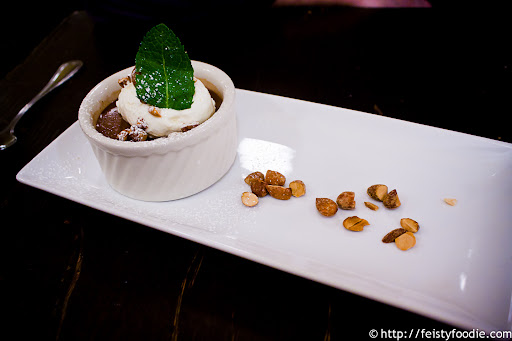 Sean chose the chocolate pot de creme with whipped creme fraiche and salted almonds. I liked the almonds, but the pot de creme lacked the texture I associate with pot de creme and was just really… pudding or mousse, not really pot de creme.  Ah well. 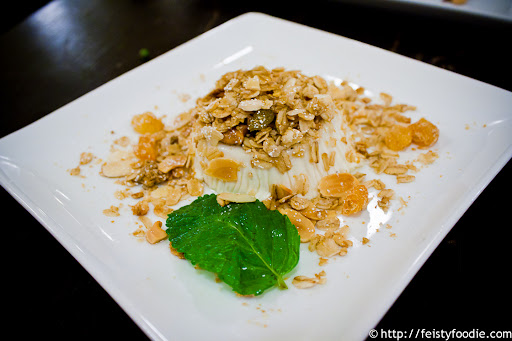 Almond milk panna cotta, with house made granola and lavender syrup – I love almond milk, and I love panna cotta, so it was a no brainer when I saw this on the menu.  Unfortunately, covered in crap as it was, I found it hard to enjoy – though it turned out the texture of the panna cotta itself was so freakin’ soft that it needed the crunchy bits to sort of give it a bit of texture back. The bits of dried fruit in the granola made it interesting, but … I don’t know, it didn’t do it for me. I didn’t find it as enjoyable as I thought I would.

While I appreciated the way my issue was handled (and I did get a little sick later in the night, but nothing earth shattering thankfully), the food overall was just too mediocre for me to give this place another go. If someone else wanted to go and insisted, I wouldn’t fight it, but I’d have extremely low expectations. I don’t know – everything I’ve had since the first time I was there has been just okay, so you probably want to spend your money elsewhere. There hasn’t been anything particularly special about anything I’ve had…

PS I am going back to not eating mussels. Sorry. But two out of three experiences were bad… I am allowed.