I was on a recent ramen kick when TC told me about a place that had just opened in Harlem by Columbia University. I was intrigued, especially when just a few days after he went and liked it, Serious Eats posted a glowing review of the place. So early one Sunday morning, I met up with DLS for lunch up there before going to see 21 Jump Street (this was opening weekend, just so you know how long ago this took place). (And it was really funny! Sure parts of it are corny and the plot is thin, but overall, a fun watch.) 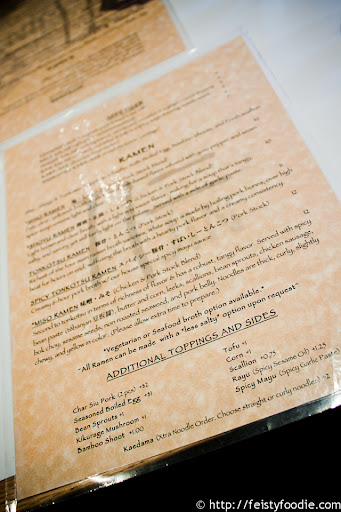 The menu is pretty simple, covering just one side of the page. 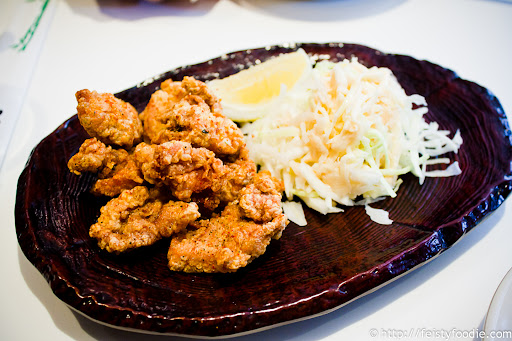 We started off with the kara age or fried chicken pieces – I’d been disappointed with the kara age at Tabata, our current favorite ramen place (I’ve eaten there at least 5-6x now, not bothering to review the followups, but have tried other things there), so I was eager to have it elsewhere. This did not disappoint – fried perfectly crisp on the outside, juicy meat on the inside, and seasoned very nicely. The slaw on the side was just nice to munch on but nothing special. I was really happy that we were off to such a good start. 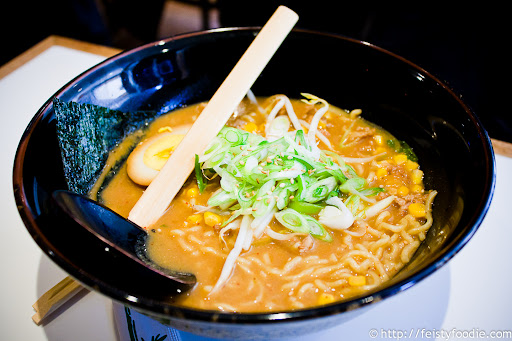 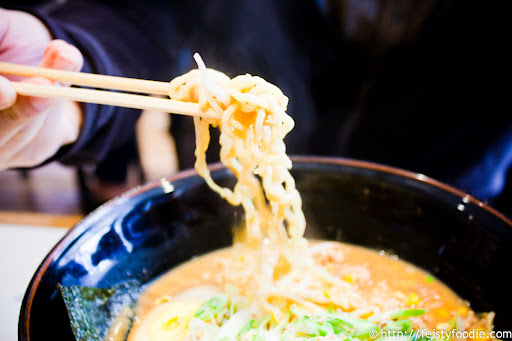 DLS chose the miso ramen, the only one served with curly noodles.  I know for sure he enjoyed his bowl very much, and I tried his noodles and really liked them as well. The perfect texture – a bit of bounce, good chew, and just perfectly cooked… it was good. He did note that it was spicier than he expected, but nothing unbearable. 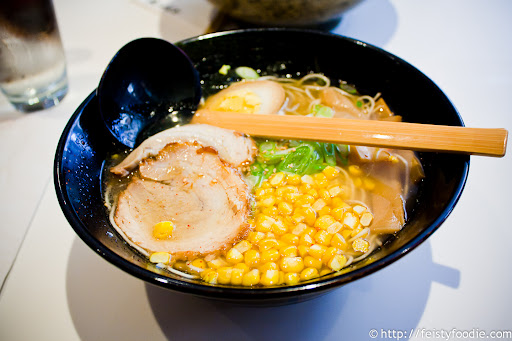 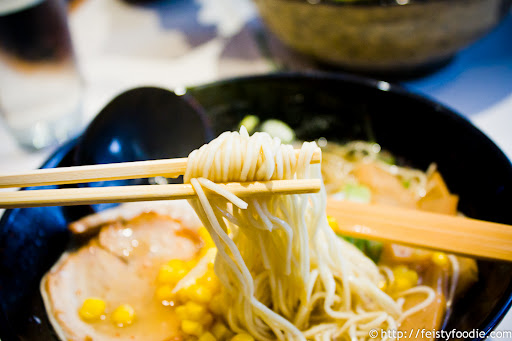 I chose the shio ramen, as that’s generally my first order at any ramen place for comparison’s sake. It’s my preferred type of broth… usually. I had a lot of issues with my bowl. First, to get the good stuff out of the way: the pork slices were perfectly tender and fragrant, melting in my mouth nicely. Yeah, that’s all the good I can say about my bowl, really: the broth was well-made, but I found it agitating and annoying that someone decided they should add a ton of yuzu pepper/seven spice. When I order shio ramen, I expect the broth to be light, salty, ‘sweet’ – if I wanted to add spices, I could use the bottle of pepper on the table to pump the spice level. It wasn’t unbearably spicy, it was just enough to tickle my tongue and annoy me, as that’s not what I wanted when I ordered that. That’s not to say that you won’t enjoy this: maybe everyone in the world likes things this way, and I’m odd. Regardless, I found that a negative… and one that I could and would overlook, had I enjoyed my noodles.

Oh, my noodles: gummy, floury, tasting mushy and yet uncooked at the same time – they were just not good. I had a hard time eating a lot of them because they just tasted so bad – seriously, all I tasted was uncooked flour and mushy noodles. I was pretty upset by this – given that I’d looked forward to this so much and honestly, I’d read so many good things about the noodles. Why did my noodles suck so bad?!

Now, I know many people who have gone since then, and before me as well, and not a single person has reported the same issue I had. I’m inclined to believe that I got the one bad batch (and DLS tried some of my noodles and agreed with my assessment, so I’m not crazy), but given the location being super far from just about everything and anything that I personally do, and my bad noodles plus not enjoying the broth that much… I seriously doubt I will give this another try. 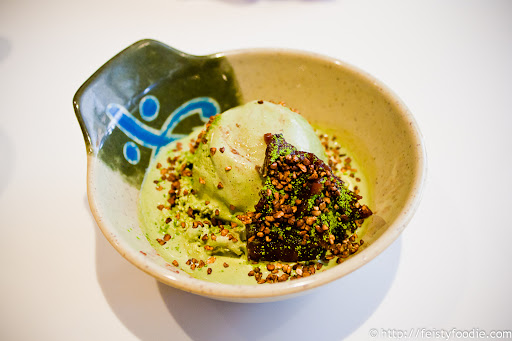 To rinse the uncooked flour taste out of my mouth, we decided to share a green tea ice cream – served with red bean paste, toasted buckwheat, barley molasses and soybean powder for $3.  I was surprised to see so much of the ice cream melted before it got to us, but I liked the toppings and thought the serving was the perfect size (and price) for a quick sweet bite to end our meal. It was definitely more interesting than just a scoop of ice cream – and you know how I love texture in food, so the contrasting crunch was much appreciated.

Unfortunately, I cannot recommend nor not-recommend this place. My noodles were unforgivably un-tasty, and I just didn’t like the broth. I do recognize that enough people have gone and liked the noodles that my batch must have been just a bad one… but as I mentioned, given its location and my personal experience, it is highly unlikely I will be returning (unless one of my friends insists that I give it a re-do, which has happened with several of my recent negative reviews already). Service was extremely friendly and pleasant, and the space is nice and comfortable as well. Oh, be warned- it is kid friendly, which may be a negative for those of you who don’t have kids. (I had the absolute pleasure of sitting next to a kid whose parents spoiled the crap out of him. I don’t care if I was there for only 10 minutes of their rearing him, if you don’t wake up until we’re about to leave, we’re leaving anyway and you can eat at home. You don’t get to tell me that we’re staying just because you don’t feel like going home. That’s how my parents raised me.)

If you do decide to check Jin out, do let me know about your experience. I’m really curious about my noodles and if it’s possible I got the single lone horrible batch…