One early Sunday morning found DLS and I in Chinatown for dim sum. I actually eat dim sum a little more than that tag would have you believe; I just often don’t bother taking pictures because dim sum is usually a group affair and the way food is served is not conducive to taking photos before anyone touches the dish. I actually wasn’t going to take photos this time, either, but when DLS and I realized that no one else was joining us, he said, “You might as well,” and I said “heck why not.”

(Golden Unicorn was chosen because TT has told me a few times that it’s his favorite dim sum place. I know I used to go there as a kid – when it was filthy and before Chinatown spread as far as it does now – but it fell out of favor with my parents, especially as Queens began opening more Chinese restaurant, so I haven’t been in probably 10 or 20 years.) 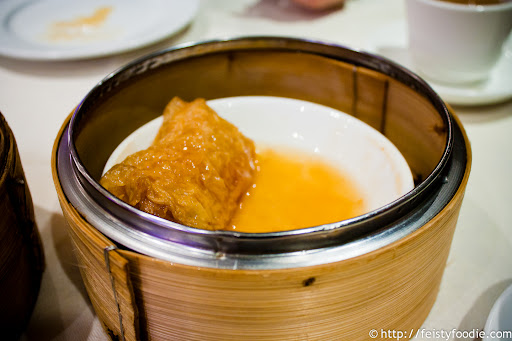 The first steamer basket placed in front of us (and yes, we each took one before the brief discussion of whether or not I should take pictures occurred) was the ‘shuen jhuk guen’ (so yeah, all you Cantonese speaking people out there? I don’t care if you think I’m spelling it wrong or if I’m saying it wrong or if you flat out think I’m using the wrong name; feel free to correct me, nothing’s going to change :P), or tofu skin wrapped around various vegetables including but not limited to bamboo shoots, Shiitake mushrooms, and more. The sauce is a cornstarch gravy flavored very mildly with soy sauce. This is one of my favorite but secondary dim sum dishes – meaning, I like it a lot and will order it if I see it, but I won’t be upset if it never comes out during the time I’m eating dim sum (there are dishes that I will refuse to leave the table if I don’t get to eat them).  Golden Unicorn’s version was okay. 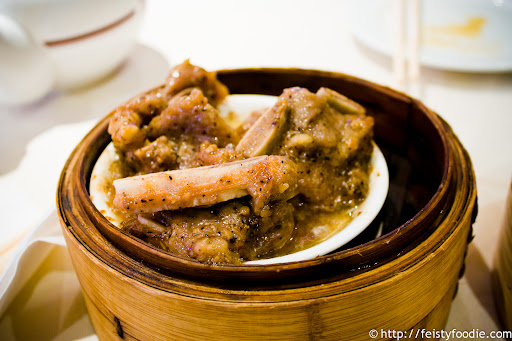 Oh, miscommunication problems: I vastly prefer the smaller, chewier ‘pai gwut’ (pork ribs) than these, the pepper short ribs, but the dim sum cart was right there and DLS took my comment that “most people seem to prefer these to the other ones” to mean that *I* prefer the short ribs. I don’t – they’ve yet to be good while I was there, though other people say they have had them when they’re good. No, these were over-peppery, fatty, gristly, and just unappealing to me.  Neither of us enjoyed this dish, and it was the only one that we didn’t finish.  And we both lamented the lack of communication, as we both would have liked the pork ribs so much more… 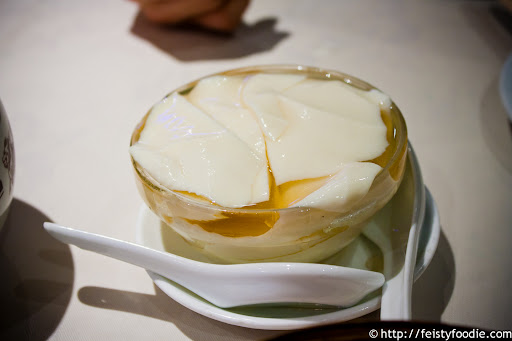 Why is there dessert on the table before we’re done? DLS was really hungry and the ladies running the carts were being super weird. I’m sorry if I’m the only one who thinks this way, but really, shouldn’t there be a flight pattern that you follow and stick to? This one woman – who coincidentally had a cart that bore items we wanted to eat – kept going in circles on the far side of the room. I was like, why won’t she come over here?! Thankfully, she eventually did, and before running out of what I wanted, or I’d have been pretty pissed. (And no, I’m not going to get up and walk over to get the dish I want. I’m just not. So don’t suggest it.) Anyway, this is soft tofu topped with a light ginger syrup. As good as it always is, nothing better, nothing worse – though my first spoonful was all ginger, the rest was way more mellow. 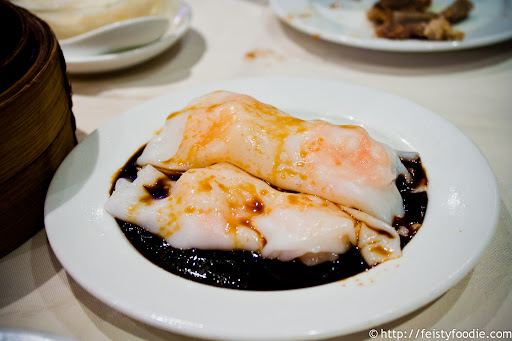 Remember I said I refuse to get up if I don’t get certain dishes at dim sum? This is one of them. (And once, I ordered it but everyone ate it before it got to me on the turn table – apparently 2 plates wasn’t enough – and the cart had no more… yes I made everyone wait until I got my own plate, and then ate all three of them myself. This post is not endearing me to anyone, is it?)  Shrimp wrapped in rice noodle, dressed with a lightly sweet soy sauce. My absolute favorite dim sum dish; here, the noodle was a little gummy, and the shrimp was just a touch overcooked. I was disappointed. 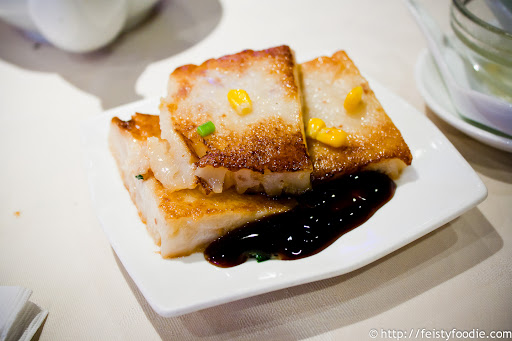 Funny enough, though, as I was telling DLS what other dim sum dishes I like eating, I mentioned fried turnip cakes as one of my favorites, and how I hadn’t seen the carts where they are fried fresh in so long… when one of those carts came by!  (They often seem to fry them in the back before putting them on a cart now; these carts have the lady pushing it frying them as she walks around, tantalizing you with their scent.)  Unfortunately, they weren’t fried enough and the texture suffered from being crowded into this tiny little griddle with so many other foods… and where is the dried shrimp, the super salty ham bits that are supposed to be in the cakes? Nowhere to be found. Bahhh.  (As requested by DLS, I need to include this quote: “Look, there’s corn on top! I like corn.”) 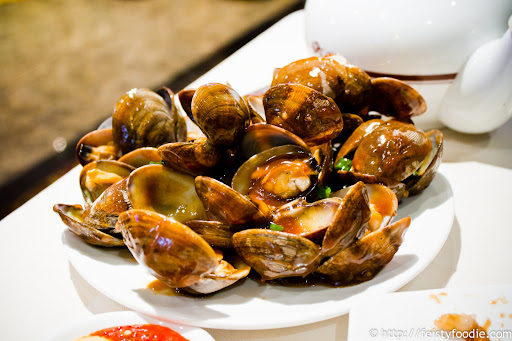 I was pretty disappointed with everything thusfar but we soldiered on, still hungry.  When the wok with clams in black bean sauce came by, we glanced at each other and ordered it… and were disappointed again. Again, slightly overcooked, slightly rubbery, the clams didn’t taste the freshest and seemed to just be… reheated.  Ew.  I ate them anyway – they weren’t ‘bad’ like I’d get sick, and I needed to fill my belly or risk being super grumpy while watching the Knicks game later – but I was again very disappointed that the dish was so mediocre. 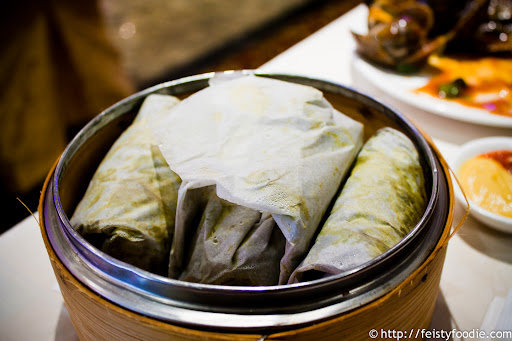 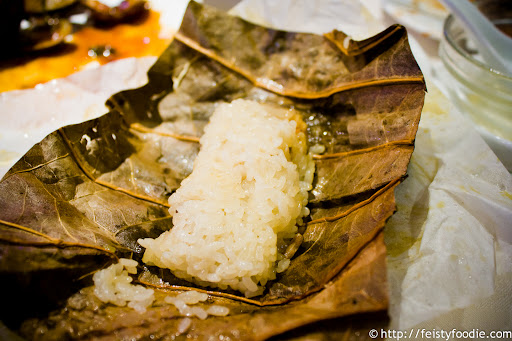 Lastly – for some carbs and because I absolutely love sticky rice – I ordered a steamer of sticky rice in lotus leaf.  I’ve never seen it served as three small packages, but I was more curious about the piece of parchment paper wrapped around the lotus leaf.  DLS shrugged it off and I opened this, eager to dig in. Sorry for no inside shot – these were soundly mediocre. Honestly? The frozen ones I keep in my freezer are better. These were slightly mushy, and lacked the flavor I look for in sticky rice – fatty pork bits, dried shrimp, and sticky sticky rice… I was done being disappointed for the day – well, until we went back and watched the Knicks lose to the Celtics, 111-115 (March 4th).

Yvo says: So disappointing, it almost made me not want to go for dim sum for a while. A very long while. Well, almost. As I get older, I’m beginning to realize that I don’t like the Russian Roulette of traditional dim sum with push carts, where I just have to deal with what’s being served at that moment. I know that’s part of the charm, but not getting what I want to eat when I want to eat it, at a restaurant, is pretty frustrating. I may stick to Nom Wah for my dim sum needs going forward – dim sum when I want it, how I want it, and pretty damn good. Maybe that’s why the card system (such as at Nom Wah) is so popular on the West Coast and in Canada (where I almost always see the card system as opposed to the carts). I don’t know.
I’ll pass on dim sum here, thanks

« Parm
The Story of Olive Oil »