Recently, Fairway Market had an event called The Story of Olive Oil. I was invited as a guest to attend and learn about the history of olive oil, as taught by Steve Jenkins. It was really interesting.

Steve led us around the world and explained 9 different olive oils to us. 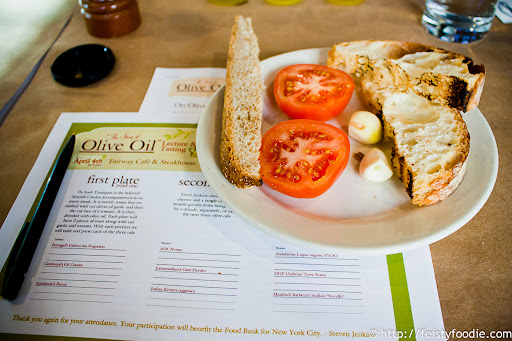 Of course, we were fed as we sampled each oil. This was really fascinating: apparently a popular Spanish tapas is taking a piece of toasted bread, rubbing it with the cut side of a piece of garlic, the cut side of a fresh tomato, and then drizzling it with olive oil. I’m more prone to eating the tomato, but doing it that way was incredibly tasty – and even more so with the various olive oils offered. (One of them made me want to just drink it straight, it was so buttery and delicious…) 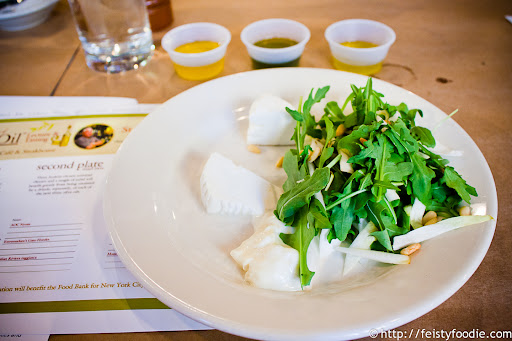 I realize many of you are now wondering “Well, aren’t you going to tell me which olive oil you liked?” but no, I’m not going to. More on that in a second.

Then, we had slices of a perfectly medium rare steak with new potatoes and another salad. And again, I had my favorite of the three olive oils. I love side-by-side comparisons – it makes it so much easier to pick out notes and understand what someone means when they say something is creamy or lemony or grassy…

We finished with lovely apple tarts a la mode – no olive oil this time.

I’m not sharing which olive oils I liked best because taste is a matter of personal preference. Maybe you’d like a different one more or less than I did. Whichever – my point in posting this is that you should all keep an eye on Fairway’s website for more such events, as they’re fun, informative, and they feed you so much!  Tickets to this particular event were going for $40, and there are sure to be more to come.

Thank you to Susan for inviting me to this event – I had a great time and learned a lot about olive oil’s origins and what I like or don’t like in olive oil! Per usual, I received no monetary compensation to post about this event, nor was I obligated to do so, positively or negatively. However, I did feel that this was an informative event that any of my readers would be interested in attending the next time they have one!