A couple months back, Aunt B found herself traveling to California a lot for work again. That meant that CT and I were lucky enough to dog-sit Scout while Aunt B was away. As an added bonus, Aunt B insisted on treating us to a nice dinner to say thank you for taking care of her child. You may remember some her previous thank you’s at Ai Fiori and El Parador Cafe. The choice of restaurant was left to me once again. Her only request that it be a place more in line with the former than the more casual latter.

I decided Gramercy Tavern would be a great choice. The three of us are huge fans of Danny Meyer’s restaurants and I had never been to GT before, while it had been years since Aunt B went. Most recently, we had another amazing meal at Maialino. We made a reservation for the more formal dining room which only has a prix fixe or tasting menu available. $88 for three courses. I guess Ai Fiori was an even greater bargain at $84 for four courses (currently $89.) I decided on the prix fixe ahead of time, since I am pretty much over tasting menus (but not completely ;).) I find tasting menus stuff me beyond comfortably so I don’t enjoy the very expensive meal as much. The tasting menu at GT also was not particularly descriptive, so it came off as a little boring. We all decided to pass, since we all would had to have it so the timing of the courses wouldn’t be off.

I chose a modestly priced bottle of red wine($42) from the Canary Islands for us to enjoy with our meal. Fortunately, the restaurant’s huge wine list has a handful of bottles priced in the $40 range. After ordering it, our waiter remarked that he recently tasted the wine and gave us a little background on it while also calling it a great choice. It was a nice touch and a reaffirmation of the warm service Danny instills in all of his wait staff. We learned that due to all of the volcanic activity on the islands, they have very rich soil to grow grapes. A very delicious wine that I will definitely be on the lookout for in the future.

For the amuse bouche, a herbed cheese puff. It was ok. Although it was quite herby, it was no where near the quality of the puff served at Per Se. 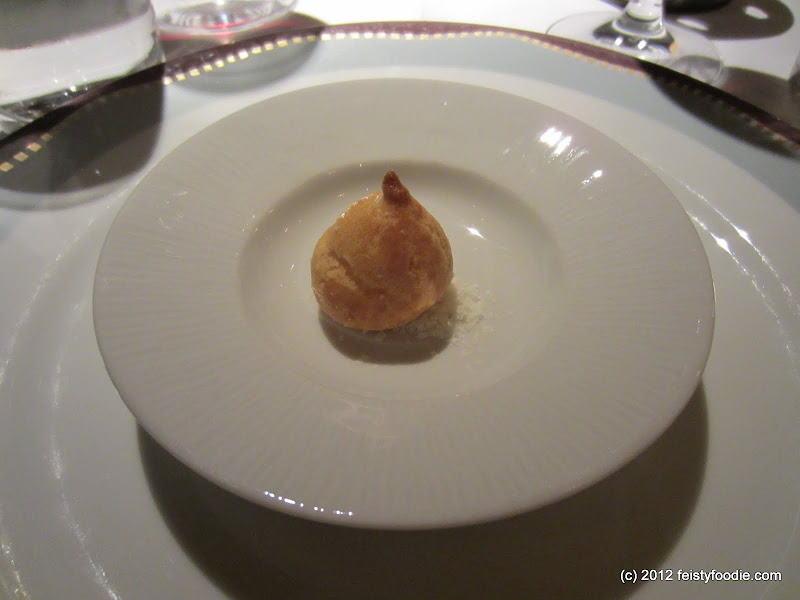 Here is the butter and salt served with bread service. Sorry I didn’t take a picture of the bread. They were good, but pretty standard. I had a sourdough roll, but there was also a choice of multigrain.
CT and Aunt B both decided to start with two of the nightly appetizer specials. 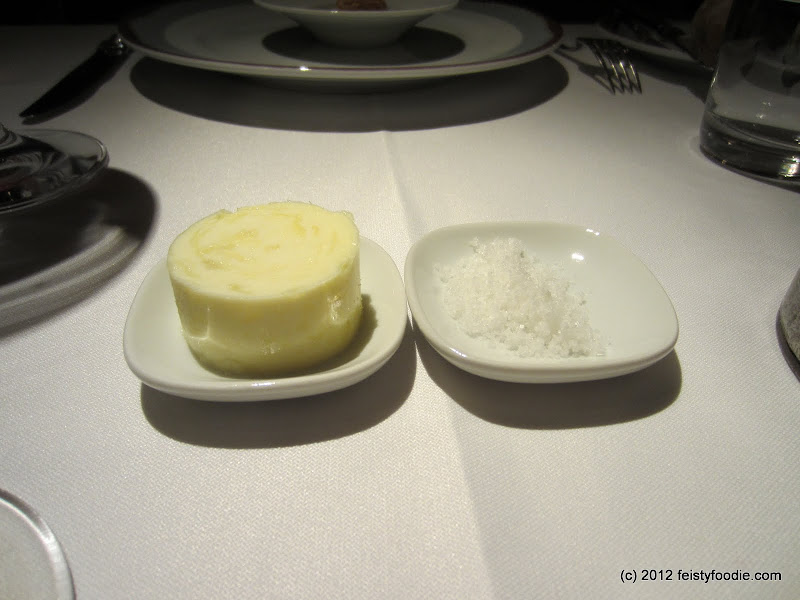 CT had the tagliatelle with lamb ragout. She shared a bite with me. The pasta was perfectly cooked and was the perfect vessel for the rich lamb tomato sauce. A great way to start her meal. 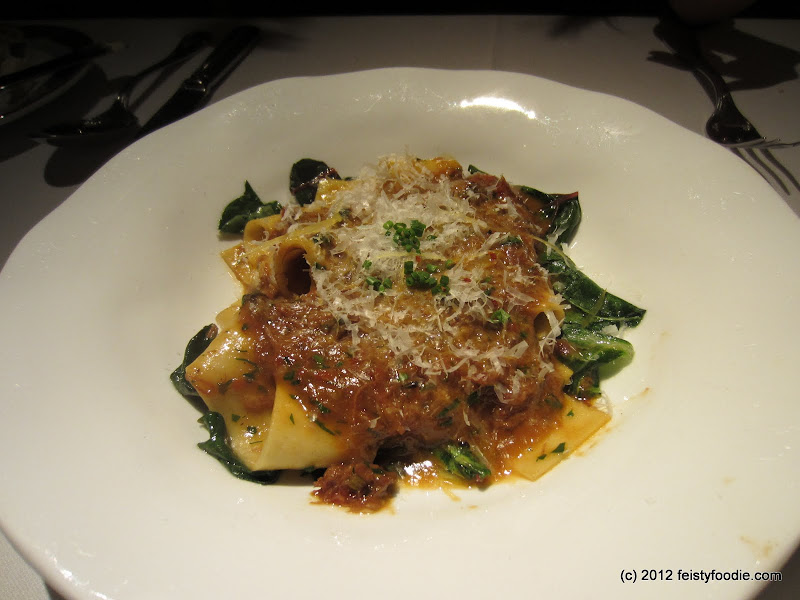 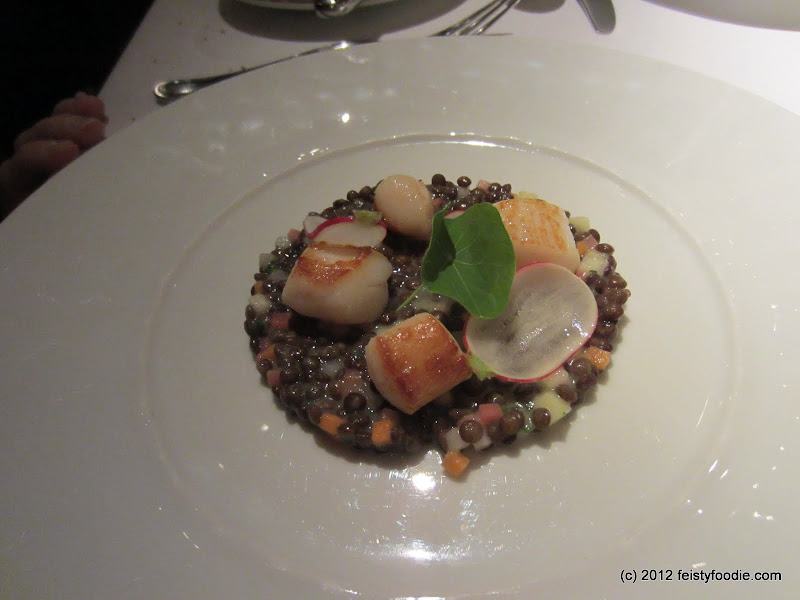 I chose my appetizer from the menu, Ruby Red Shrimp with Heirloom Beans and Brussels Sprouts. I was very happy with my choice. The shrimp were tender and sweet while the beans had a little more bite of buttery goodness. The sprout leaves were fresh and helped to cut some of the butter. 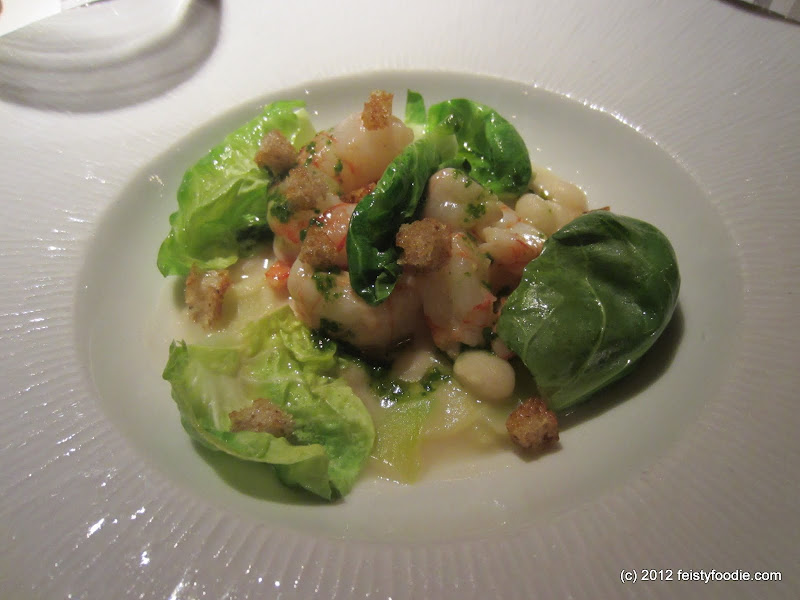 For her main, CT had Duck Breast & Confit with Sunchokes, Quince, Brussels Sprouts and Wild Mushrooms. As we found out with all of entrees, there was a lot more to the dish than expected with even more preparations than listed on the menu. Although the breast had a lot of fat showing, a lot was already rendered out so it was still quite tender. She enjoyed it, but found it to be just a tad salty, but not to the point of being inedible. 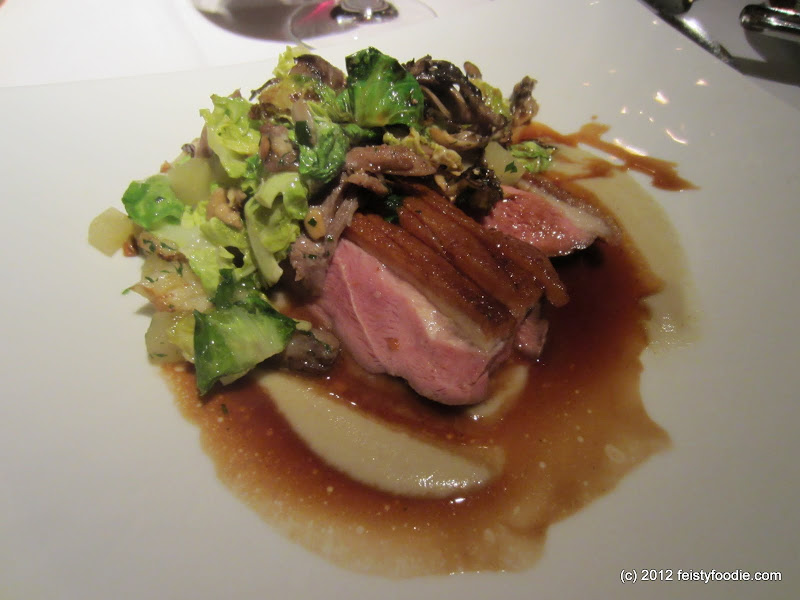 Aunt B had Roasted & Braised Lamb with Squash, Pine Nuts and Bok Choy. As you can see, there was a lot of meat on the plate highlighted by the huge lamb chop on top. She liked this a lot. Everything was cooked perfectly. 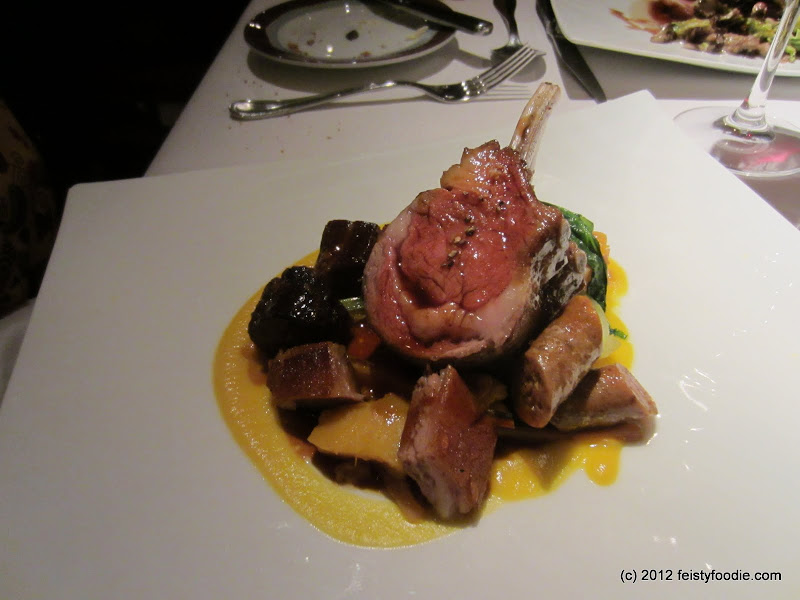 I had Pork Loin & Belly with Spicy Carrots, Leek Hearts and White Sweet Potato. CT and I knew what we were getting as soon as we saw the menu, it was just a question of who would get which dish. Since she ordered the duck, I got the pork. There was so much going on that I needed to take two pictures. The pink loin was reminiscent of a Christmas ham, but better! There were a couple sizeable pieces of pork belly that just melted in my mouth. I was happy to see the chicharron on top as I have a weak spot for it. There was also little slices of a pork sausage hidden underneath the other meats. This was a lot of food, but I greedily finished it. 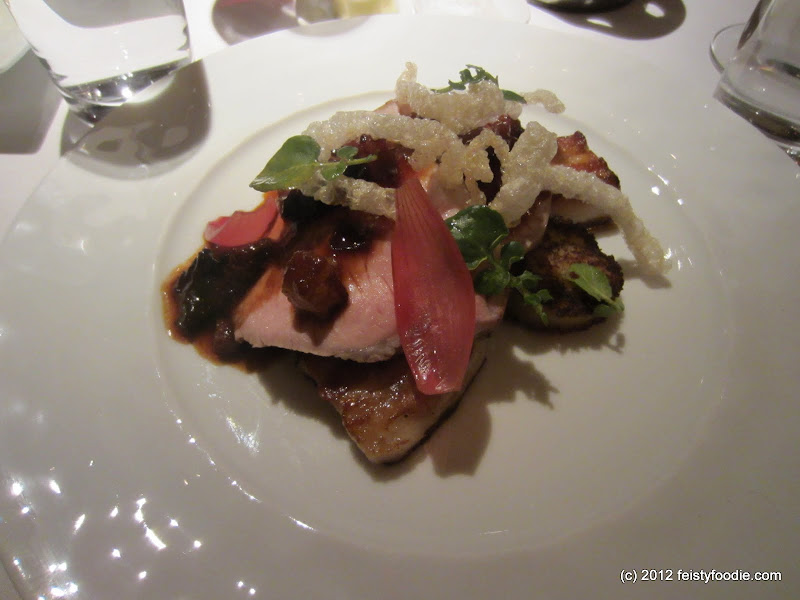 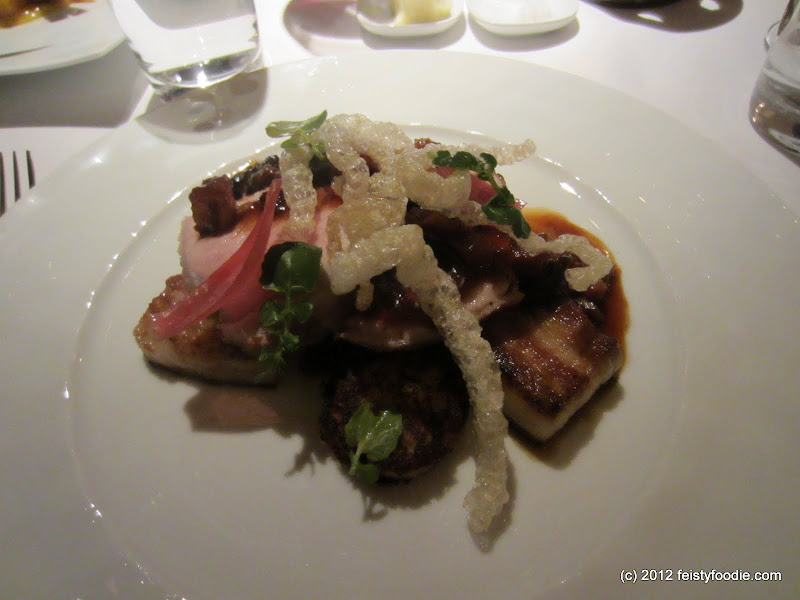 After we were done with our main course, we were presented with a palate cleanser of Mandarin gelee, crispy marscapone and orange sabayon. It was excellent. I love citrus so this really hit the spot after ingesting all of the pork. There was also some good contrast between the crispy marscapone which was like a meringue, the smooth gelee and crunchy pomegranate seeds. To be honest, I would have been fine with ending the meal there, but we were already paying for dessert… 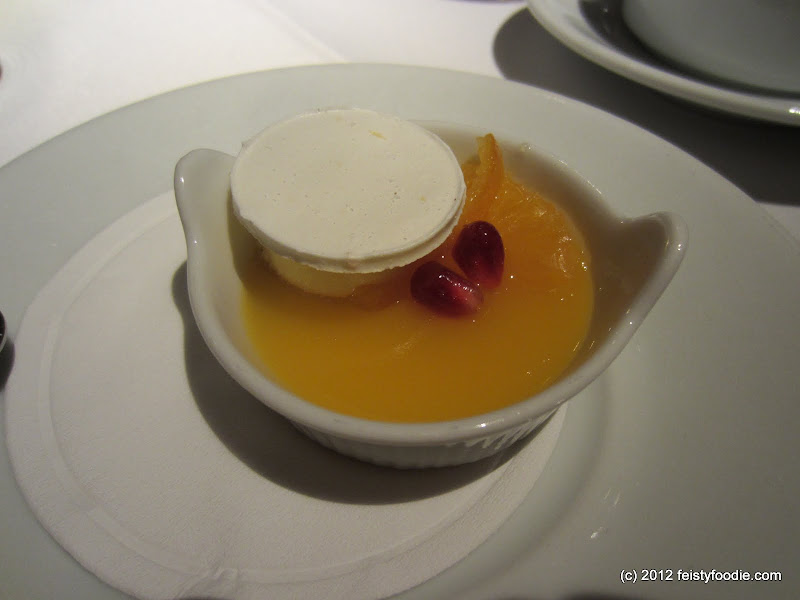 CT chose the selection of ice creams including Cinnamon Sour Cream, Butter Pecan and Sweet Cream. You can tell just by looking at them that the ice cream was expertly made. I had a taste of the Cinnamon Sour Cream and it was quite unique and fortunately mellow. 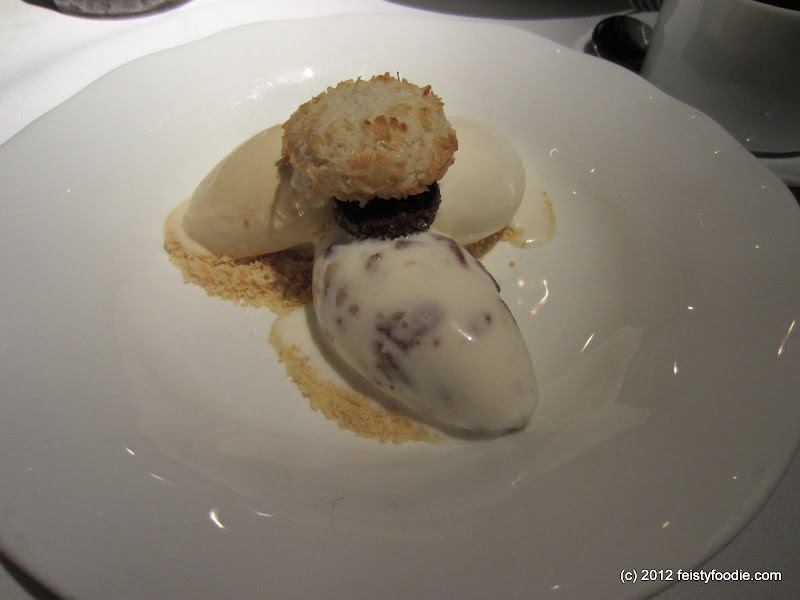 Aunt B had the Hot Fudge Sundae with Salted Cashew Ice Cream. It even came with a couple brownie chunks and crispy meringues on top. I had a taste of the ice cream and it was really good. Smooth and sweet vanilla with lots of salty cashews mixed in. The Pastry Chef definitely knows what they are doing. 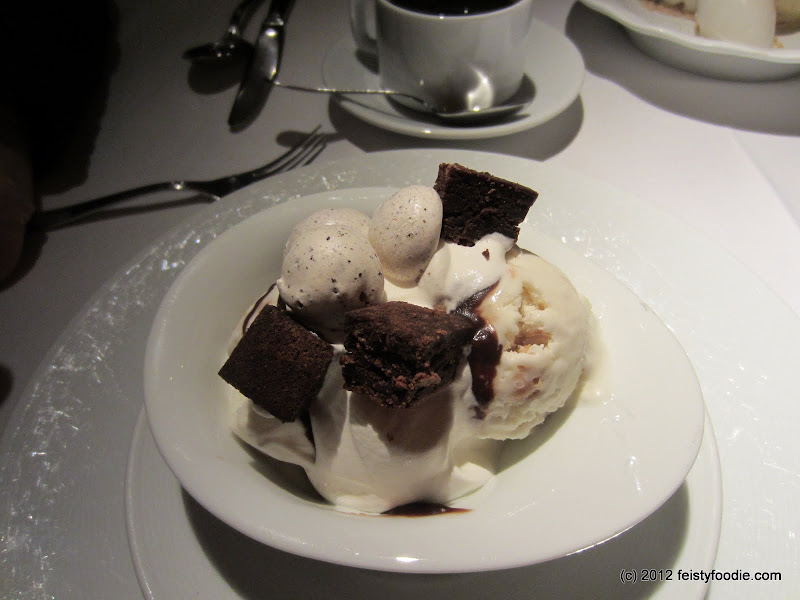 For my dessert, I had the Carrot Cake with Butter Pecan Ice Cream. I am a big fan of carrot cakes since they are usually not super sweet. This was quite a unique form of one with what I believe was a carrot gelee on top. I enjoyed it especially the ice cream too. 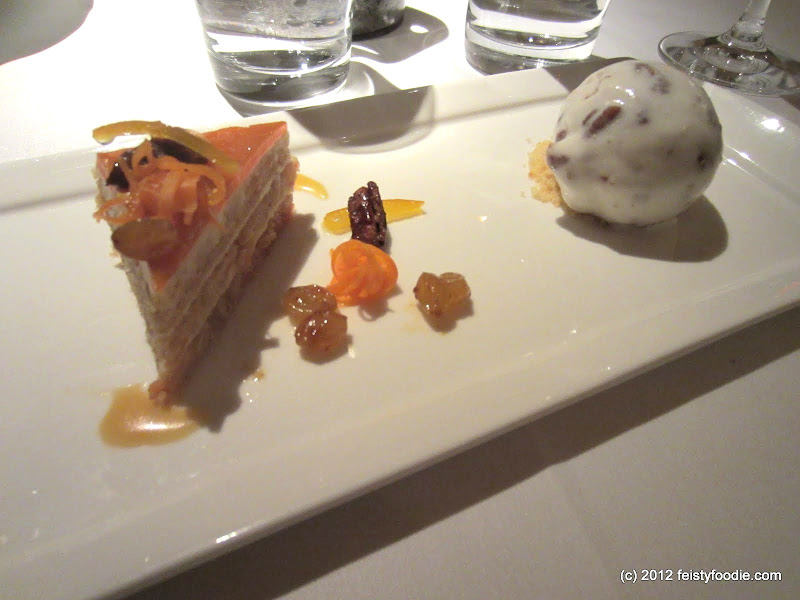 We forgot to wave the white flag, so they presented us with some mignardises; chocolate mints, Raspberry macarons and chocolate tarts. These looked too good for us not to try. The chocolate was perfectly tempered, which Aunt B appreciated a lot especially since she is quite the amateur pastry chef. I liked the chocolate tart the best. The macaron was made perfectly since it had that light crunch with a chewy bite. The chocolate mints had a ton of mint flavor for such a tiny bite. 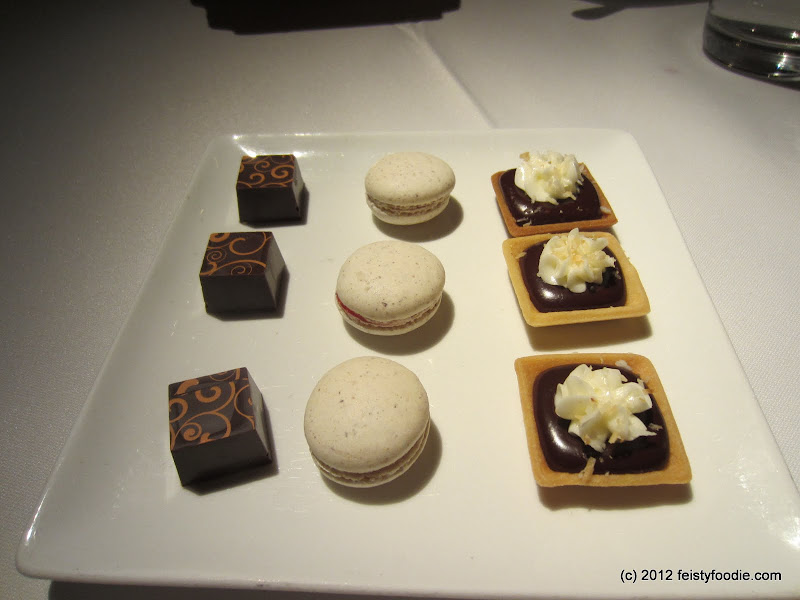 With the check came “breakfast for tomorrow” for each of us, an apple-cinnamon cake. I had it for dessert the next day, oops. It was very good. 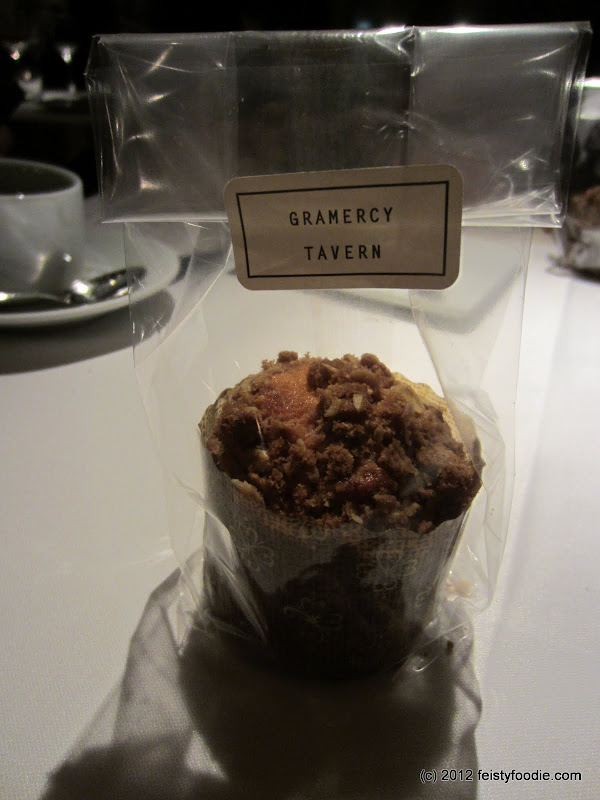 All in all, it was a great meal at Gramercy Tavern. As a surprise to no one, service was truly excellent. While they may not serve as many courses as Ai Fiori, they might actually serve more food with their large portion sizes. Thanks again to Aunt B for treating us especially when it was no trouble to watch Scout at all.