As I mentioned in my post about Woorijip, after dim sum at Grand Harmony, we took a long walk north to work off some of the food we’d just consumed.  Our first stop along the way, however, was Doughnut Plant!  I wrote about this place the first time I went, but never took pictures any of the subsequent visits.  I love their doughnuts and feel comfortable saying they are the best I’ve ever eaten – soft and slightly chewy, I just love the texture and the flavors and… yum.

Anyway, this is my first (and hopefully only, ever) post that uses completely, only, entirely cell phone pictures.  My BlackBerry Torch has a 5mp camera and I don’t know why I didn’t use my camera to take any pictures, but here it is. 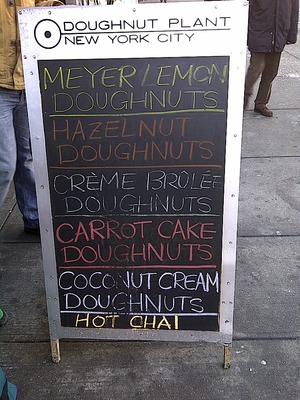 That day’s flavors… yum!  Except coconut because coconut = death for me. 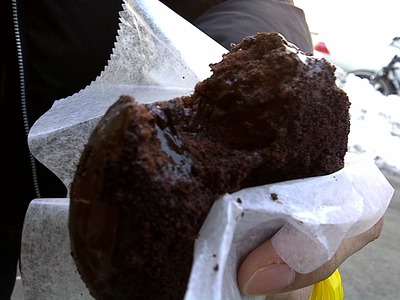 TC ordered the blackout, which to my surprise and delight had chocolate pudding inside it!  I tried a bite and thought it was moist and tasty, but I think this is a cake doughnut, because it was crumbly and not chewy. 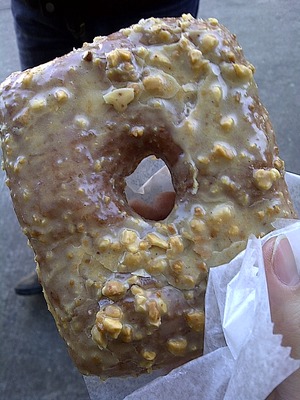 I decided to try the peanut butter glazed blackberry jelly doughnut.  The exterior was sweet, with a bit of crunch from the peanut bits in the glaze, and the inside… 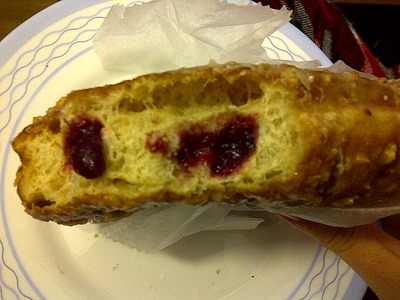 Had a nice line of blackberry jelly in it.  Slightly sweet, very dark, I really enjoyed it and again enjoyed the chewiness of the donut surrounding the jelly.  Yum! 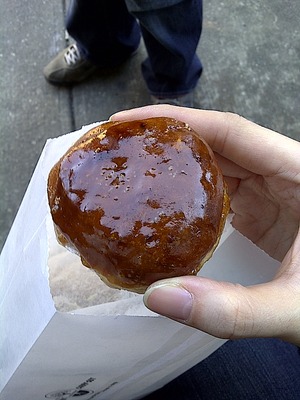 I think every single time I’ve been, a creme brulee donut has ended up in my bag.  It’s slightly smaller and more expensive than the other donuts, but BF really likes them, so I try to always pick one up for him if I’m there.  He loves it.  He definitely likes it better when I’m able to give it to him the same day, but that doesn’t always happen… and he still loves the donut, lauding it as “well thought out.”

Yvo says: I love Doughnut Plant.  You should definitely check it out if you’re near any of their locations, which, for some unfathomable reason are not all listed on their website (there are locations in Korea, and I think Japan as well).  Awesome donuts – though they are not cheap at all, they are worth their price (in the $2.50-3 range).
highly recommended