Ughhh, do you ever find other people annoying? Because, if you’re anything like me, it happens constantly. I vastly prefer my own company to that of others – it’s no secret how much I dislike almost everyone around me – so when I offer to share my time with someone, it’s kind of a big deal. Unfortunately, more often than not, those people prove themselves to be unworthy of sharing my time, or prove to me that I should just stop offering to share my time with them.

I’m one big curmudgeon. I know.

One lovely Friday, I was planning on making my way over to The Plaza’s food hall and grabbing a sandwich at No.7 Sub for lunch – the No.7 club calling my name. CY was messaging me that morning, and asked what he should have for lunch. Without thinking – as is my MO – I said ‘well, I’m going to the food hall if you want to join me’ and to my surprise (he works from home in Queens), he immediately agreed and hopped on the subway to meet me.

When we met up at the Food Hall, I was ready to get on line at No.7 Sub and grab my sandwich, but he kept circling and wanted something else. You know when you’re not that close to someone, and they make a suggestion, and you don’t want to just shut them down immediately? Yeah I fall into that sometimes. So when he was like “Let’s eat at Todd English,” I reluctantly agreed and saw my $14 sandwich go up in flames. (Along with the idea that I’d spend “only” $14 on lunch…)

At this point, since this IS a food blog, it behooves me to stop telling you how aggravated I was at CY by the time we ordered, since he complained about everything on the menu (“Sushi?! I’m not getting sushi at this place. Why did she recommend the dumplings to me? Why would any Asian person come here and get Asian fusion food for these prices??”), and just tell you about the food. 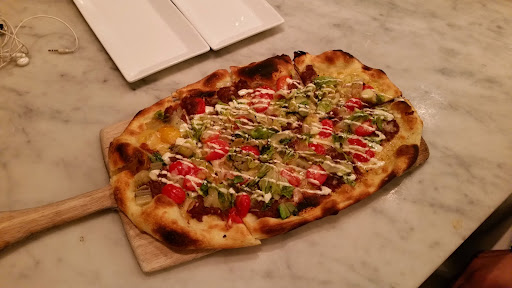 First up: our BLT pizza! Bacon jam, Cabot cheddar, pear tomato, charred romaine and aioli… this hit all the right flavors with the smoky and meaty bacon jam, the cheese which honestly I wouldn’t have missed, though it lent a little bit of salt to the slices, the juicy tomatoes bursting with their hot liquid in your mouth, and then the bits of lettuce scattered around. The aioli pulled it all together to remind you that hey, I’m supposed to remind you of this sandwich! while the pizza itself was fired perfectly with a crisp crust that held up to the ingredients atop its thin self. I really, really enjoyed this… $18 much, maybe not, but there’s this whole argument I have about how much I prefer to pay for pizza and this isn’t the place for it, but basically… I liked this pizza. Whether you’ll be happy paying that price for it is your own thing.

Risotto tater tots sound like the best thing ever, do they not? With fontina and a truffle aioli aside them… unfortunately these fell very flat. They were dense blobs and not salted enough nor seasoned. They relied entirely on the dipping sauce for flavor, which is unfortunate as I don’t like truffle flavored items that much. While the exterior was nicely fried, the interior was a mush of poorly made risotto and I sadfacedly ate a bunch then gave up.

Last but not least, when we’d first been seated, we saw the burrata salad go by and land at diners near us. Immediately it was added to the list – not just because I need vegetables in my diet but because we both agreed that burrata is a thing of beauty and awesomeness. I liked this salad but I didn’t think it was that great, if that makes sense. It was good.. just not that unique nor interesting. The burrata was well-made, and tasty, but the salad next to it could have used more oomph. I ate some but then concentrated on eating half of the rather large pizza.

Overall, I enjoyed our lunch – despite my initial reservations and irritation – but I did not enjoy it $33/person (including tax/tip) much. It was simply good. Having said that, however, there are some other items on the menu that caught my eye that I might consider going back to try. Just with someone else…

The space is actually really nice, and I enjoy walking through the whole food hall (not just the Todd English portion) to browse delicious looking items. It’s a regular in my lunch rotation, though I don’t always wind up eating there as most items are rather expensive.

**I feel a little bad about this post. I wrote this while in an extremely bad mood and put it aside. Re-reading it, I’m not too keen on re-writing it, but I did have lunch with CY again a short while later and he admitted he knows how picky and difficult he is. Hopefully, if he reads this, he understands that 1- I was in a really bad mood when I wrote this and 2- I don’t hate him, but eating with him – despite not having a restricted diet – has thusfar proven fairly frustrating.