Ever since the moment I first heard Turtle talk about Don Peppe on Entourage, I have wanted to dine at this place where they claim had such amazing baked clams. I love baked clams. So when the opportunity arose, the Stallion and I headed over on a Wednesday night to see what the fuss was about. (Quite honestly, I used to live so close to this place and never visited – what a shame!) 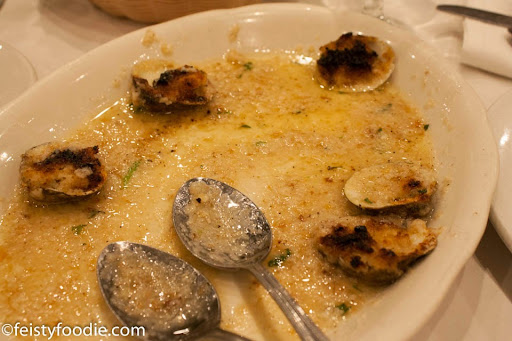 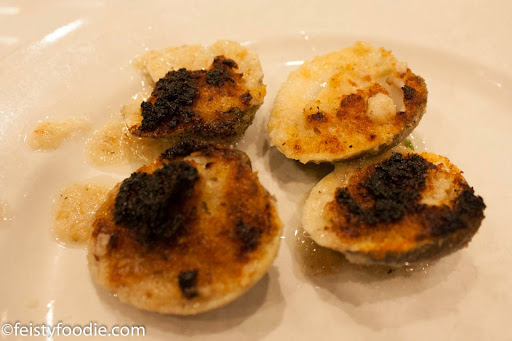 I told tS he could choose everything since this is his jam, but I guess I wound up picking everything… well, almost everything. Anyway, as I said everyone talks about how great the baked clams are – so we ordered those to start. Honestly? The tops of some of them were burnt. Not “extra crispy” but just straight up burnt, and burnt tasting. If you can move past that, the clams were extremely standard Italian American baked clams – tender clams, juicy, with a lot of flavor going on, and a squeeze of lemon gave that extra bit of zing that I adore – but after all the hype, I wasn’t blown away. I’ve had better. Good to even great baked clams – but not worth a trip just for that. 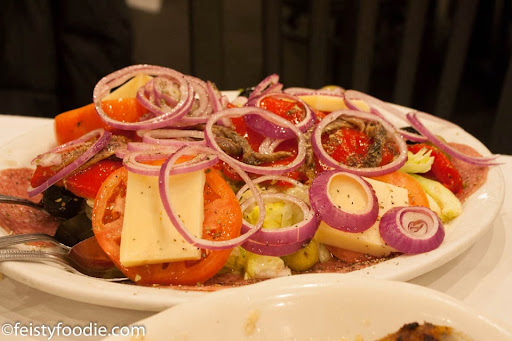 tS chose the antipasto to start as well; a ginormous platter of this had been served to the table next to ours just as we arrived, and it looked delicious. It was pretty awesome! but don’t be fooled by how high that mound looks, it’s held up by quite a lot of iceberg lettuce. While I enjoyed eating the lettuce, drenched in the fatty meat oils and seasonings as it was, tS derided it as ‘filler’. I just shrugged and ate it. The dish was good – a few too many onions for me, but it reminded me of a not-chopped-up version of the Carmine’s salad at, um, Carmine’s. (Which, in that post, I cite as being absolutely delicious and would go back just for that. Sooo… Actually, I think I should make this salad. It can’t be that hard.) 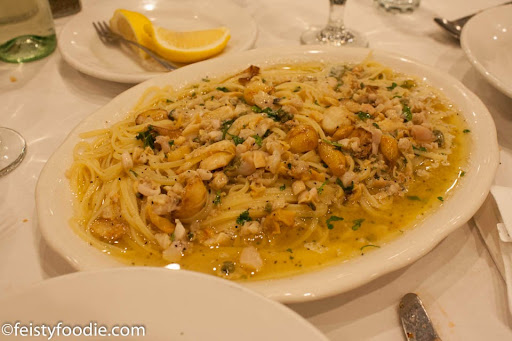 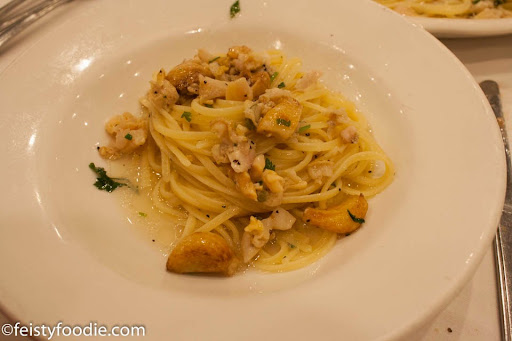 I’d also heard great things about the linguine with white clam sauce, so we had to get this. Be warned: if you plan on getting this and are at all messy about your eating, wear something you don’t care about splashing oil onto, because you will. But how delicious that oil will be: completely infused with the whole cloves of garlic that are scattered around the whole dish (I think they were poached in the oil with the pasta) – which tS and I both mashed up into our pasta and ate, yum yum! – and the very essence of clam juice… whoa nelly, I probably wouldn’t have minded soaking anything in that sauce and eating it. The pasta was cooked perfectly al dente but had absorbed all of the wonderful flavors of that sauce – garlic, clam, lovely. I was chowing down on that pasta like no tomorrow when I realized if we were to finish the dish between the two of us, well, that would be disgusting and fatty-riffic. So we packed a lot to go.

Wait, I should explain. We still had another dish coming. 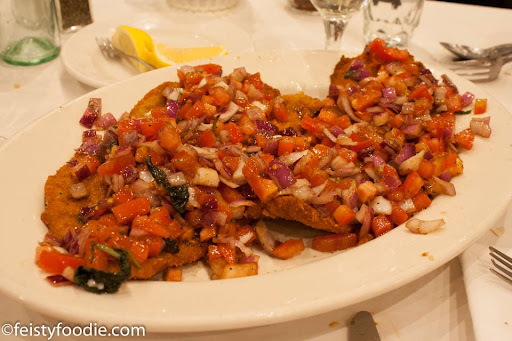 tS had chosen, on his own with no input from me, the veal Don Peppe – veal cutlets topped with bruschetta. While the veal was cooked to absolute perfection – pounded thin, crisply fried, tender and juicy interior with a crisp exterior, my mouth is salivating thinking about it – the bruschetta topping was way too much onion for me. It was 2/3 onion, 1/3 tomato… and while I like onions, the tang was just a touch too sharp for me in this application. tS greatly enjoyed this dish though – but he loves onions way more than I do. And while I appreciated how wonderfully prepared the entire thing was, that topping just wasn’t for me – well, I pushed away a lot of onions and ate more tomatoes, problem solved!

After we packed most of this to go as well, tS asked if I wanted dessert. I just looked at him. 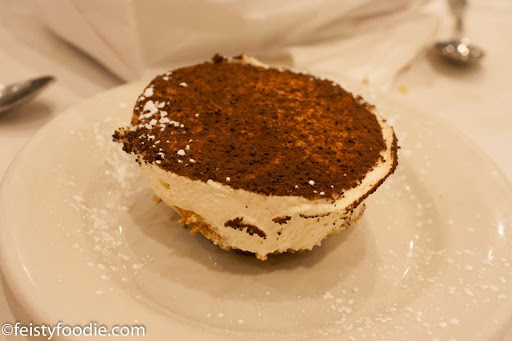 … and somehow, he wound up ordering tiramisu, which is his favorite dessert (and my second favorite, so it works out). I’m not sure they make this in-house, but it was perfectly suitable – fluffy, light, and speaking softly of espresso flavor – I had a good couple of bites, despite being full to bursting. tS enjoyed his espresso which may or may not have come with anisette despite their not having a liquor license… and finished the meal pleasantly, as we closed out the restaurant.

Overall, I thoroughly enjoyed our meal at Don Peppe, appreciating the throwback to old school Italian red-sauce joints, as they’re called. Our server was friendly, chatted with us, helped us with the menu – and he did inform us that we ordered a lot of food, though he didn’t try to stop us. Oh, and we also had a couple of bottles of their house white wine, which was surprisingly delicious – and I mean delicious. It was balanced – neither cloyingly sweet nor too dry for my palate, but just right, and we both liked it a lot. It went really well with the seafood, too.

The decor is pretty casual, and the lighting theme is by no means romantic – look at the above photos, fairly bright. When we walked in, I was a little thrown to see exactly 4 minorities – an older Asian woman who looked and behaved like someone’s gumare, a biracial woman with a white man, a black guy with a huge group of white guys, and me. All of the staff is Italian or close, and the patrons were mostly white… but I didn’t feel out of place or stared at, judged, at all. Honestly, while I’m not used to being such a tiny minority anywhere in NYC (not since I moved out of Howard Beach, haha), it didn’t feel uncomfortable whatsoever. Everyone was jovial, friendly, and I had a great time people watching.

The portions are really huge, so I would recommend this more for group dining than for a date – though I did see a few people on dates as well. Eh, just take the leftovers home, like we did – I would not mind eating that pasta the next day after even more sauce has been absorbed into each strand, omg YUM.