As I mentioned in my post on Sushi Samba 7, I celebrated my 33rd birthday with sashimi and sushi. Specifically, omakase from various high end establishments around the city. My first stop was 15 East, after having heard from various friends how great the omakase was… and snagging a lunch reservation on a Saturday alone.

My birthday present to me, a long, luxurious lunch taking place over several hours – because that’s how I roll. 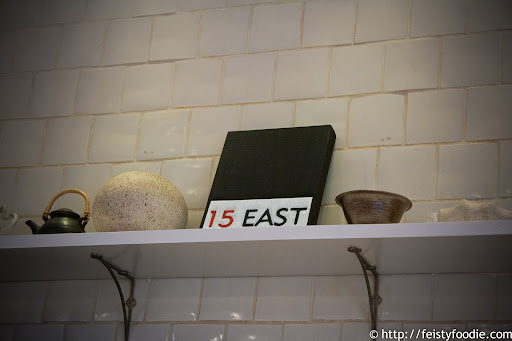 I arrived for my reservation just as they were opening, to an empty place. I sat at the sushi bar, alone, in front of my chef, who was smiling and honestly, while not un-friendly, did not open up and start talking to me much until towards the end. Initially, he served me each piece, told me what it was, and watched with amusement as I scribbled his words down, took a photo with my camera, and silently watched me eat each piece… but then began talking to me a little in the end. 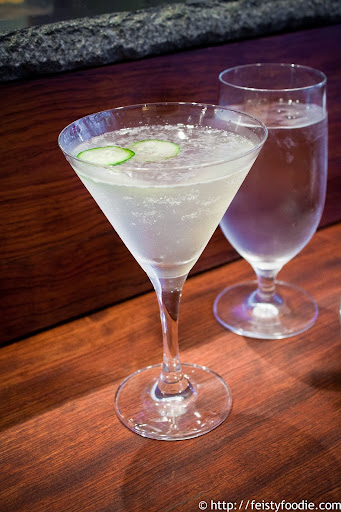 When you see a drink on the menu that’s made for you, you order it. That’s how I felt when I saw this drink – Hendricks, St. Germaine, I believe yuzu and some type of sake… It was a strong drink, and I thoroughly enjoyed it… slowly… 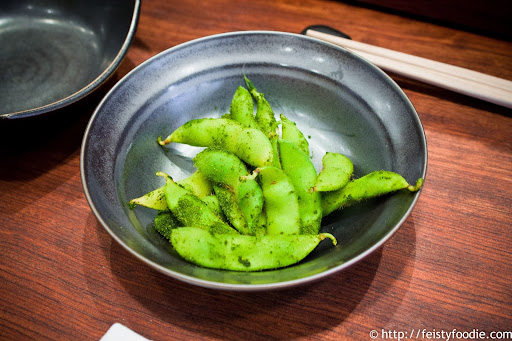 While I browsed the menu, hot edamame were brought over for me to enjoy, dusted lightly with seaweed salt – that got all over my fingers as I repeatedly tried to wipe them off on my napkin. Haha. 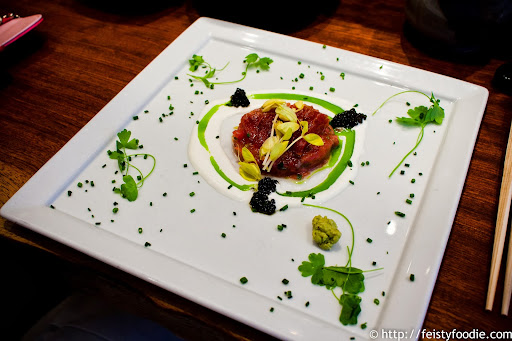 I already knew what I wanted, though – the omakase – and I also opted to add on the tartare of blue fin tuna with caviar, creme fraiche and a delicious avocado/wasabi sauce. I happily scraped the plate clean – the freshness of the fish, the lovely ocean brininess of the caviar, and the creaminess all combined for a very yummy mouthful. I looked forward to eating more. 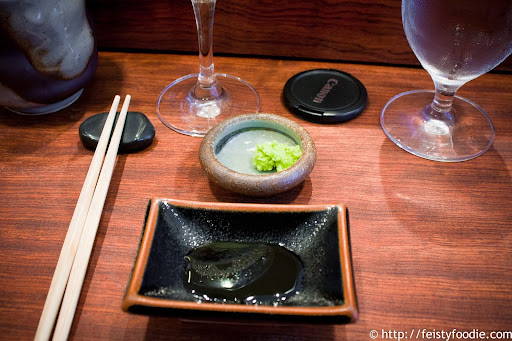 Fresh wasabi grated in front of me (I don’t like taking pictures of people, so I tend not to.) 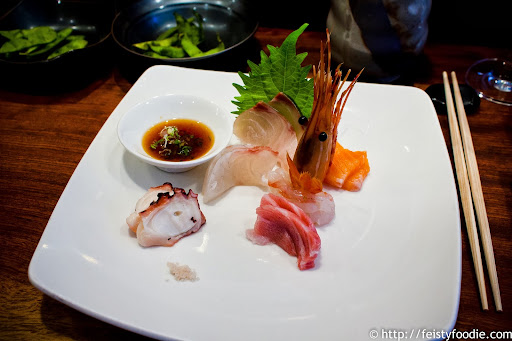 When my platter of sashimi arrived, I was really excited. Poached octopus with natural sea salt; Thai red snapper with ponzu; shima aji or striped jack; arctic char/salmon; botan (sweet shrimp); otoro or fatty tuna… all graced my plate. I was incredibly excited: each piece was super fresh… the octopus was perfectly bouncy in my mouth, accented nicely by the natural sea salt; the citrus tang of the ponzu balancing nicely the red snapper; everything was brilliantly paired. The fatty tuna melted in my mouth happily… and funny story for you, as always. I’d heard in the past about people eating the shrimp head, so I picked it up and poked inside its neck cavity where some raw flesh gleamed at me tantalizingly. Using my chopstick, I wiggled it, and lifted it a bit and sucked on the neck hole. Umm… okay. I put it back down and shrugged. Maybe I’m just too stupid to eat that properly.

I’ll finish this story in a minute…

Unfortunately, as is often the case when I do tasting menus and/or when I’m alone, I failed to photograph a piece of fish. My first piece of sushi was hamachi belly – extremely tender, soft, and delicious. I apologize for the lack of the photo… and I blame the extremely strong drink I was still sipping 😉 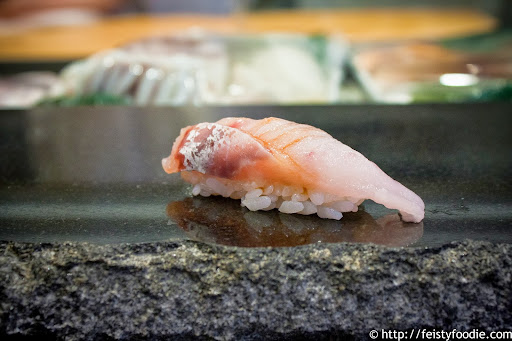 If this looks like it’s sitting directly on the ledge above the sushi bar, that’s because it is. The chef wiped down the ledge before and after each piece. Sea perch, brushed delicately with the chef’s own sauce mixture, proved slightly spicy with what my notes say was a “nice texture” – no further indication. 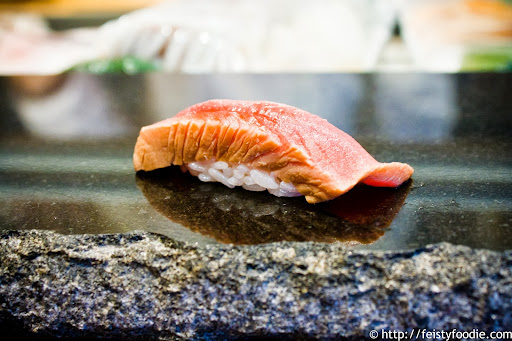 Soy marinated tuna – a preparation with which I became quite familiar in October, as it seemed popular on omakase menus… cough. The melty texture of the tuna along with the umami punch from the soy marination was perfect – I thoroughly enjoyed this piece and wondered how to replicate this at home. 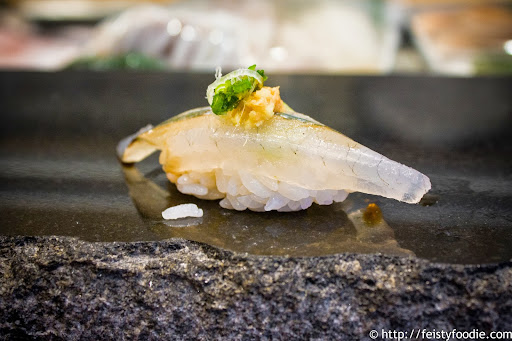 Needlefish with ginger – the slightly chew texture of the needlefish and the spicy kick from the ginger were a refreshing change of pace from the fishes with more melty textures. 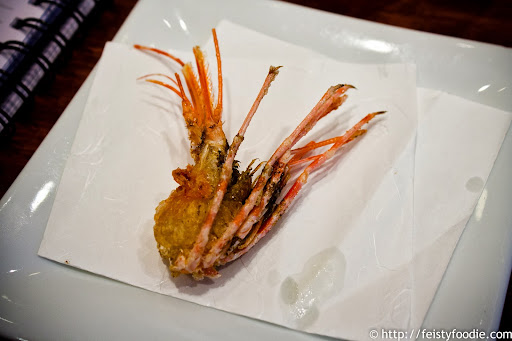 And we return you to the story of how silly I am: when this arrived – the shrimp head, fried to a crisp delight – I thought “OH… so that’s how I eat that.” I crunched happily through the entire thing, and my notes say it clearly: best bar snack ever! Salty, crispy, ever so slightly tasting of shrimp – pretty much the best shrimp chips ever, made of actual shrimp head. DELICIOUS. 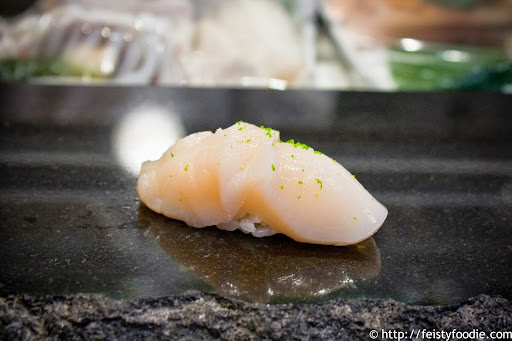 Next up: sea scallops with sea salt, yuzu and yuzu zest; I watched chef squirt a very tiny lime-looking item over the scallops, and zest it with the same. I had to clarify with the server, who informed me that it was, in fact, yuzu – which I’d never seen whole/fresh like that, so I was quite intrigued. The taste was incredible – a lot brighter than lime, tarter, but brought such a great quality to the scallops… I was in heaven. 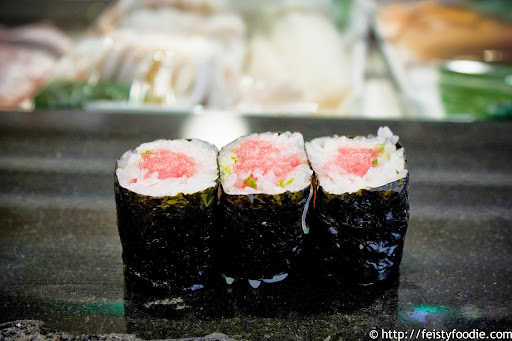 Negi toro rolls, or fatty tuna and scallion – I normally eat all of my sushi and sashimi very plain, no soy sauce, no wasabi, so I picked up a piece and ate it alone. Chef stopped me then, and explained that this needs soy sauce. So with a light hand, I dipped it in soy sauce, and was impressed by how much the teensiest touch of soy sauce could change a roll from eh to amazeballs. Oh wait, salt, right.

At this point, chef told me that the omakase was over, but asked if there was anything I wanted to try or add. I hesitated and then asked him what was very fresh or new, something I might not have had in the past.

Well, first I asked about uni, and he explained that he actually had three different types of uni today. I was intrigued: I knew I’d had California/Santa Barbara uni in the past regularly, and once or twice had the Japanese/Hokkaido one, but couldn’t recall the Maine one. So I asked for all three.

He explained to me that to his tastes, California is ‘creamy’, Hokkaido is ‘sweet, but strong’ and Maine is ‘salty’. 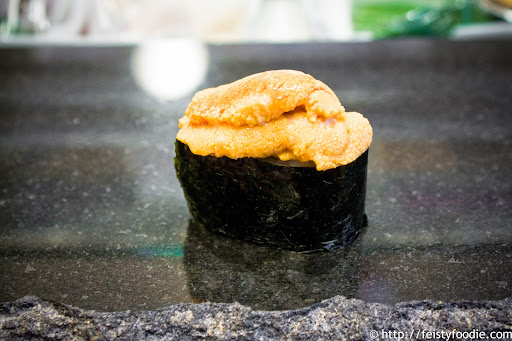 First up: California. I found this one very creamy, but distinctly the uni to which I am most accustomed. I eat this one frequently as it’s often the one that’s served on menus. Note how big and fat the pieces are. 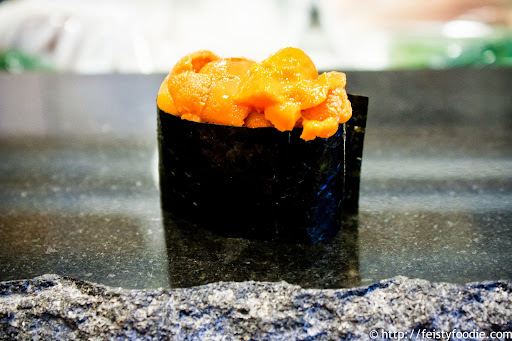 Next: Hokkaido, which my notes say: “sweet but also very fishy – wow. After taste is very fishy.” I understand many people would not consider ‘fishy’ anything but negative, but in such a case, it’s what this is meant to taste like. While I enjoyed the sweetness, I found the lingering after effects of the fishiness in my mouth slightly unpleasant. 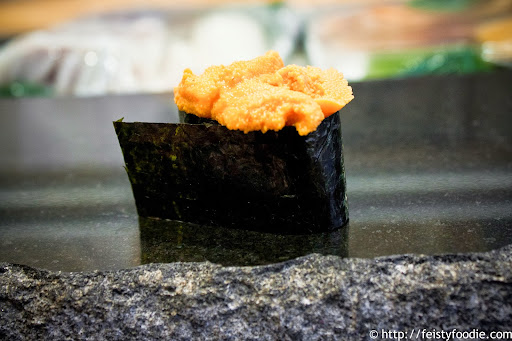 The third and final style, Maine, was salty but not overpoweringly so. I enjoyed this one… but I think California is more my speed. Perhaps because it’s to what I am accustomed, but I found that one the most pleasing to my palate.

Experiment to figure out your favorite! 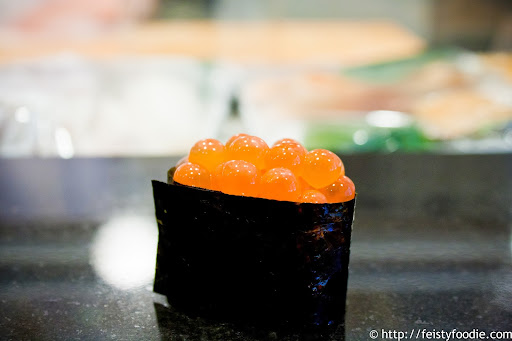 Next, chef told me about the fresh salmon roe that he’d brined himself. This intrigued me – I’d had no idea that roe was brined, as I’d imagined it was salty enough on its own. I found these to be, surprisingly, not as salty as normal – huge balls that burst in my mouth delightfully, and normally, roe appears to stick to itself. Here, not so – they were each almost entirely separate from each other, and delicious. 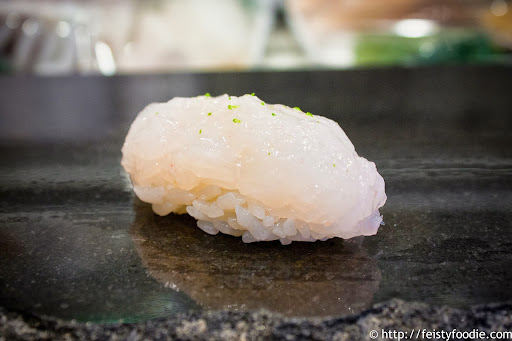 My final bite – after the chef told me how great they were – shiro ebi, or tiny white shrimp with wasabi and yuzu … you can’t see it, but he pulled apart the shrimp to show me how tiny they were. About the length of my (short) eyelashes, and a little thicker… all pressed together on top of the warm rice. I found this bite interesting, but it was time to finish up.

Overall, I found this the perfect start to my education on omakase – I had a great chef, who, once he warmed up, explained everything thoroughly and fully to my satisfaction. Everything was delicious and fresh, and I thoroughly enjoyed everything I ate. Would I do it again? In a heartbeat; eating alone – especially in fine dining establishments – is something of the best kind of spoiling of oneself you can do. I highly recommend that, and for the sushi and sashimi aficionados, I highly recommend 15 East. I had fabulous service, uninterrupted attention, oh and if you want to go for lunch… it’s drastically cheaper than for dinner.

Yes, I spoil me. But everyone deserves a little treat yo’self from time to time!

***1/27/2014, edited to include: The total price for everything above, with tax and a generous tip, was $173. While this may shock some of you, please bear in mind that in addition to their omakase, I had a cocktail, an appetizer (the tartare), three different pieces of uni, the salmon roe sushi, and the shiro ebi. I believe all of my extras basically doubled the cost of my omakase, along with the associated tip. I still found it to be a great deal and a fabulous experience – just be aware that if you want to add on as much stuff as I did, you may no longer consider it ‘inexpensive.’