***Buckle your seatbelts, this starts a slew of Japanese/sushi/sashimi posts. Why? Because I celebrated 2013’s birthday with sushi (specifically, omakase!), and it’s time to post about them. This isn’t actually part of my birthday posts, but I figured I’d put them all together and ease you in, as this was not omakase…

Eons ago – okay, late September – my buddy Niko of Dessert Buzz (if you like dessert, he is basically the authority on all things sweet in NYC and beyond) invited me to join him at Sushi Samba 7 for a dessert tasting. Really, he wanted me to have a peek at the savory offerings because where he knows dessert, I’m all about the savory… The restaurant took really good care of us and sent out plate after plate of food. In all honesty, normally I take pictures but don’t always share this type of experience, but I was genuinely impressed with what I ate such that I have to share. Really – though I will say that I went in expecting very, very little, as I had a somewhat pooh-pooh view of the place. Every time I pass by, it seems so fusion-y, so “catering to the non-adventurous palate”, so… well, just not the type of place I would want to go and drop money at. 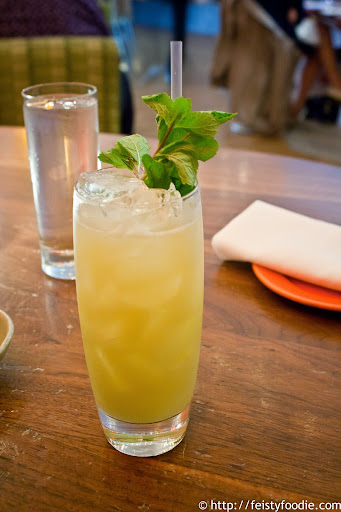 Because I like cocktails quite a bit, I opted to start with one – I love Tom Collins, and the Wasabi Collins called my name. It was interesting and while you might think that wasabi in a cocktail is gross, this actually made quite a lovely surprise. The heat from the horseradish served as a great counterpoint to the refreshing qualities of the Collins cocktail itself. I enjoyed it very much – especially how strong they made it. YUM. 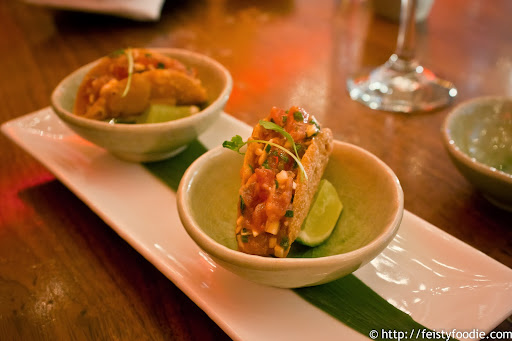 While we pored over the menu, mini yellowtail tacos appeared, with avocado and corn salsa in them. I enjoyed the small, crunchy bites greatly.

We decided to let our server choose a bunch of dishes to showcase the restaurant’s talent. That’s usually a good way to go… 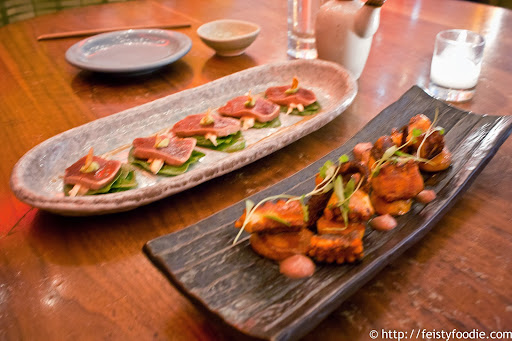 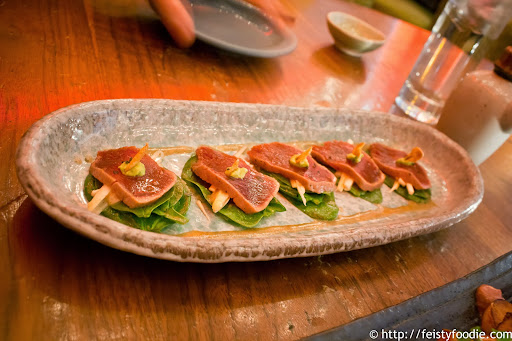 The next two plates to arrive were tuna tataki – which were lovely, cooked properly, with a great mixture of textures and flavors, and unfortunately, the plate I failed to photograph alone, the Portuguese octopus a la plancha… sigh.

*swoon* Each piece of octopus, perfectly cooked, with the best chew possible in octopus, delicately seasoned, wonderful… and those potatoes? Holy hell, I do not know how you get such flavor out of a potato. Our server hazarded a guess at how it was made, but I don’t know that boiling and then frying can elicit the amazeball texture and deliciousness that this potato was. 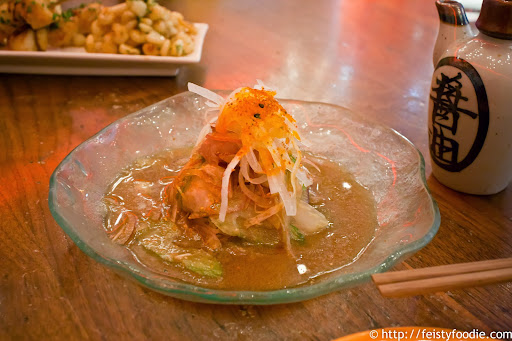 I believe this was the yellowtail seviche – which was tasty enough, but not particularly remarkable, so I recall just eating a little bit before moving on. 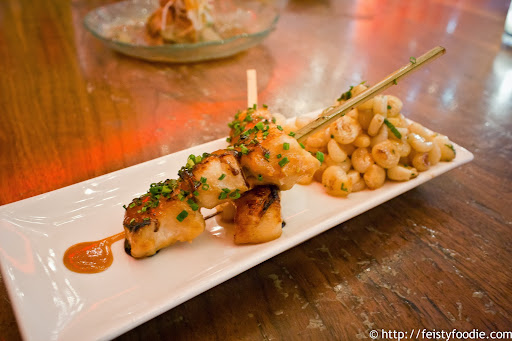 Anticucho – skewers of sea bass, with miso and Peruvian corn. The combination of sea bass with miso is not a new one, but it’s always a good one: rich, savory miso with the meaty bold flavor of sea bass – here, cooked perfectly tender, melting in our mouths like so much deliciousness. Another YUM for me. 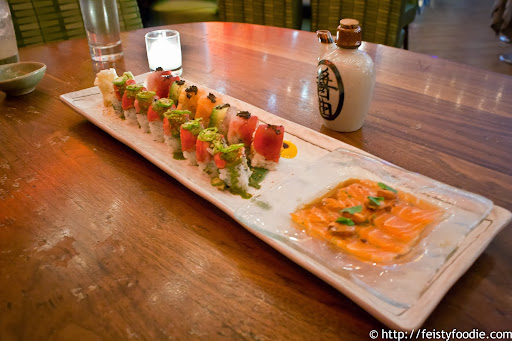 Niko and I were nearing the stuffed beyond belief point, and knew we still had dessert to tackle, when this monstrous tray of sushi and sashimi came out! Slices of salmon in ponzu on the right, and various rolls on the left. While they were all tasty with fresh fish, I don’t normally eat rolls, so I enjoyed them – and wouldn’t be averse to eating them again – but definitely not something I can see myself insisting we order. 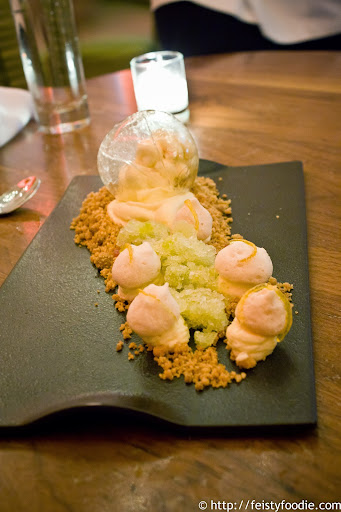 Then the dessert parade began. It’s good to know someone like Niko, who not only has amazing taste in dessert, is always happy to share with his friends. I’ll let the expert take over and discuss the dessert – first the yuzu cheesecake, which thoroughly impressed both of us, over on Serious Eats, written by my very esteemed colleague Niko. 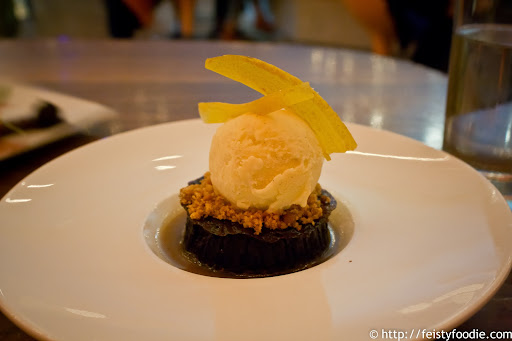 While you all know I like to say I’m not a dessert person, the fact is that if something is delicious, I will eat it. And love it. This chocolate banana cake surprised me very much – first, if you say anything citrus, I’ll tend towards that – so yuzu cheesecake, okay, I’m not a cheesecake person, but yuzu? yes!! – but when I took the first bite of this cake, I almost lost my mind. I told Niko, “Oh, this isn’t that good, you don’t want any, don’t worry I’ll take care of it for you” and proceeded to demolish it. Okay, fine, I let him have some, as it was his invitation that got us there, and he’s the dessert expert – I don’t even remember what he said about it, because I basically blacked out and sat there inhaling. The dense, chocolatey but not overly sweet cake balanced perfectly with the ice cream and the crumbles on top… it was just the perfect combination of texture and flavors for me. And I really don’t care for chocolate in general (except when I’m stressed or hormonal; if you see me reaching for chocolate, it’s generally a bad sign). Just, wow.

The pastry chef came to discuss the desserts with us for a few minutes, and she did smile as I sneakily ate almost the entire banana chocolate cake. She mentioned that the other desserts were mostly her creations but this one had been on the menu forever and a day, and it was in no danger of being taken off the menu as it’s one of their most popular dessert items. Hmm. 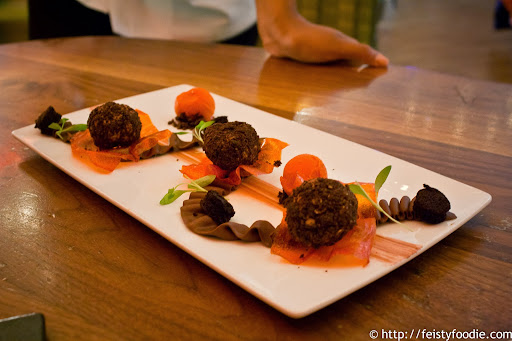 Red chocolate chili peppers… I am still thinking about the previous dessert. I didn’t like this one all that much, there was too much going on for my tastes, so I’m not going to bother explaining it. Seriously just go back and ogle the chocolate banana cake. Mmmm… cake.

Overall – there were some dishes that blew my mind, and some that were just standard – still good, but just standard, if that makes sense. Like “what you’d expect” from a place at this price point. I enjoyed the combination of Peruvian, Brazilian and Japanese flavors, and was impressed with many of the items. This was not really what I expected – especially given that I’d dismissed this place as for the “non-adventurous” where a lot of the dishes were rather inventive and creative – but I enjoyed my meal very much.

However… and this is a big however… though Niko and I left a generous tip, per usual, our entire meal was comped. As I’m looking through the menu to bring you descriptions of items more completely, I’m a little concerned about the prices. I don’t like them. I’m not saying they aren’t warranted – there was a lot of thought and care put into the dishes – but $6/each for the mini tacos at the beginning of the night seems excessive; they were as long as my pinky finger. Some of the other dishes seem very high priced as well – and while I enjoyed them, I don’t know that I personally would go out of my way to return. (This is not really in a part of town I frequent, though I obviously have walked by many times.)

That’s NOT to say that YOU shouldn’t go – the flavors and dishes are pretty creative and delicious, overall – and I thoroughly enjoyed our very informative, experienced service, and the atmosphere is totally kickin’ and the people watching is superb. It’s simply to say that you have to check out the menu and decide if what I’ve said makes this type of price worth it to you. I enjoyed it, but am not in the area often, and am currently (and sadly) not in the set of people who wants to or can drop easily over $50/person on dinner for no special reason.

That said, I do dream a little about those potatoes in the octopus dish…

Please note that I attended this meal as a guest of a friend, and dinner was courtesy of the restaurant/their PR. I was under no obligation to post about my meal, nor did I receive any monetary compensation to do so. I’m not entirely sure they knew I also have a blog, but they treated me wonderfully regardless. Thank you for your hospitality!