I had the recent good fortune to be invited to a tasting at Boulton & Watt, which turned out to be directly across the street from my new favorite market, Union Market. 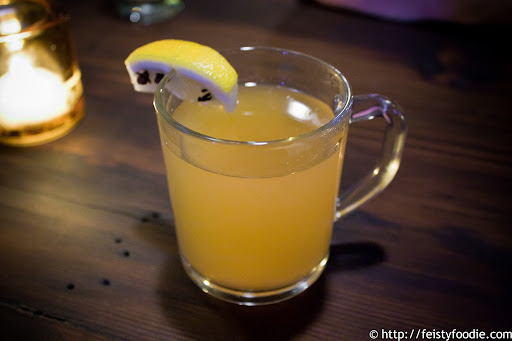 Since my visit to the Strand – which, by the way, has a new executive chef with whom I am personal friends and is an amazing BBQ master – I’ve been obsessed with hot alcoholic drinks. Though there was no cocktail on the menu that was hot, when I mentioned I wanted something warm and boozy to drink, our server – who was extremely helpful and kind of cute – suggested a hot toddy. Mine came quickly, scented with clove, sweet, lemony, and just worked nicely. Especially because it was really heavy on the bourbon. YUM.

After a bit of browsing of the menu, Cheese and I decided to be a little piggy because I wanted to try a lot of things. 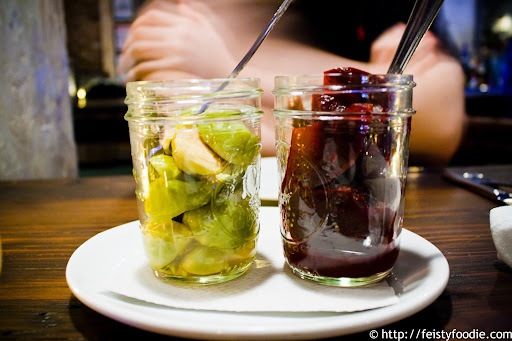 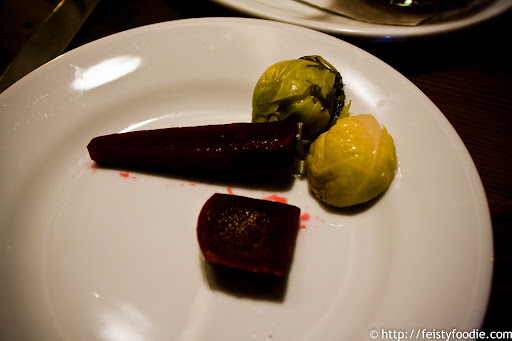 First up: the pickled items. Everyone kept raving about the pickled jars of items, so I chose two: brussels sprouts and beets, two of my fave winter time veggies. The beets were great, as expected, but the real surprise were the ‘sprouts. Their color had suffered in the pickling process, so I almost expected them to be as limp and soggy as the pale green color suggested. But biting into each cool, briny, crunchy ‘sprout, I was enthralled. I couldn’t stop eating these – they were so good. Both items were excellent, and I curiously pondered their appearance in future cocktails… or fancy pantsy pickle backs… 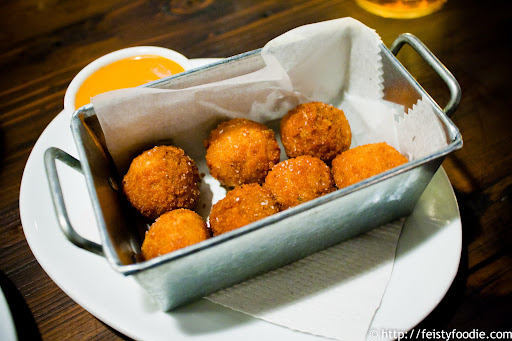 Duck confit potato croquettes arrived piping hot, but were the first fail of the night. Something about the way the croquette tasted was just off – I don’t know what it was; you couldn’t taste the duck and dipping it in the accompanying harissa aioli didn’t improve matters. The potato seemed muted too, which is a little odd; the one nice thing was that the exterior was well-seasoned and the little balls were perfectly fried. 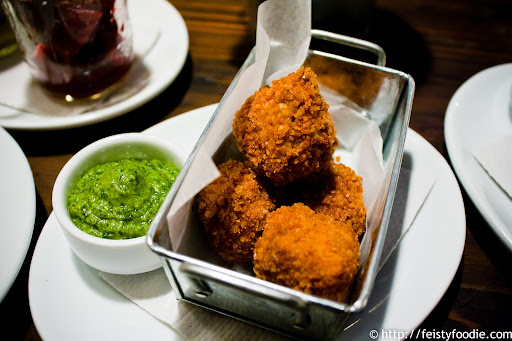 Despite Cheese’s less than fondness of mushrooms, he consented to my ordering the crispy wild mushroom duxelle – and I’m sure he’ll chime in in the comments with how happy he was that he did 😉  While, again, the dipping sauce seemed to detract rather than add to the dish, each crispy bite was amazeballs. No, I’m not exaggerating; crisp on the outside, perfectly fried and well-seasoned, and the inside, a medley of wild mushrooms bound together with a light bechamel. I was in love. Each bite was just perfect. 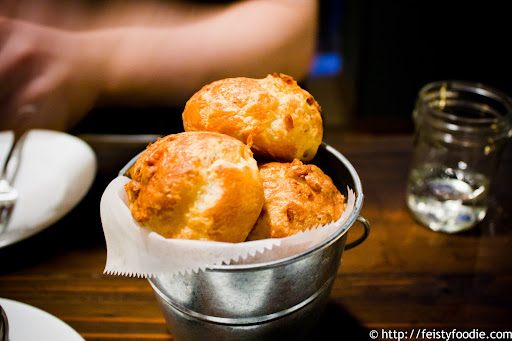 When I saw cheddar and bacon cheese puffs on the menu, I knew I had to order them. When they arrived, however, I was surprised to see they were gougeres – which I adore – and even more surprised that this gastropub was home to one of the best (best or second best, really) gougeres I’ve ever had. Light, airy – completely hollow in the inside, with cheese scented air, a light smack of smoke from the bacon, and just perfect. I loved these. Cheese wasn’t as impressed; I took them home and after a quick spin in the toaster oven, they were just as good as they’d been when they were fresh served to me. YUM. 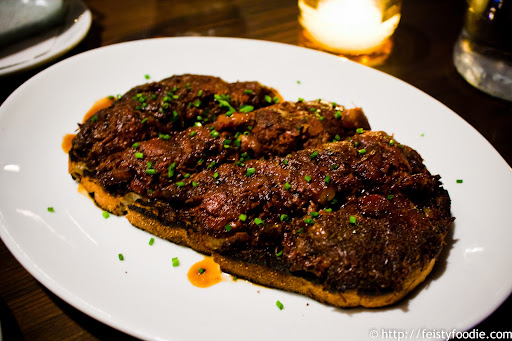 Our final appetizer! Short rib and bone marrow toast, unapologetically rich and heady – was absolutely incredible. I liked the fact that no one tried to make it pretty or add something else to it like a line or two of creme fraiche or horseradish cream just to change it – it was just MEAT, plus ESSENCE OF MEAT, all on thick slices of toast. It was so rich and heavy that when we’d finished, I didn’t think we could go on, but we did. This was fantastic, though I’m not sure I’d order it with any regularity – it’s really rich. 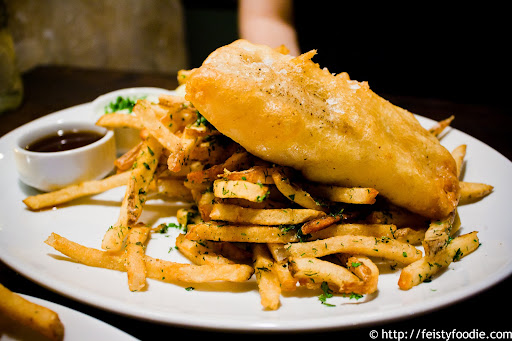 For our entrees, we again split everything. Fish & chips landed in front of Cheese. The fish was cooked perfectly, the flaky exterior not too thick nor too thin – though it kept sliding off, which annoyed me – seasoned well. This was really, really good fried fish. I would not object to ordering this again – though it doesn’t appear to be on the menu any more… 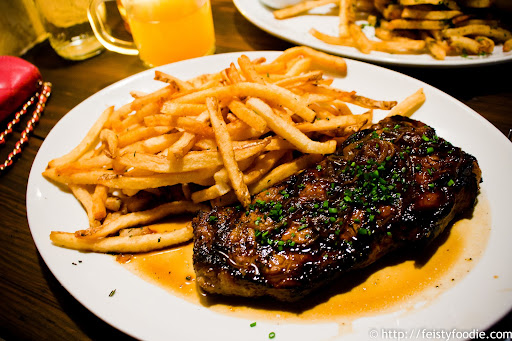 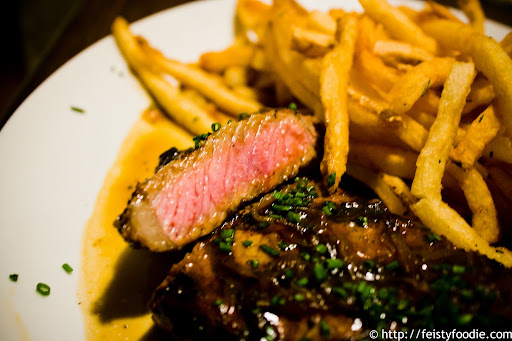 And for our other entree, steak frites – ordered medium rare, and arrived a perfect medium rare. Tender, rich, perfectly seasoned – they are not afraid of salt here – this was a great dish. I enjoyed it a lot.

The fries on both dishes were great too – nicely fried and very tasty.

Overall, the meal was a huge success – with a few missteps here and there, but nothing major – and we were both extremely pleased with the full feeling in our tummies. I have recommended this place to a bunch of friends already, because the food was just so across the board solidly tasty (minus the duck confit croquettes), that I can’t imagine a person not enjoying it. There are other dishes on the menu that I want to try, so I’m sure I’ll be back sooner than later.

Please note: I received this meal compliments of their PR firm. I was under no obligation to post about the meal, nor did I receive monetary compensation to do so. This is my opinion and I share it freely.