This is a sponsored post for which I received samples and was compensated. However, opinions expressed about the actual product’s taste and directions (at the bottom) are my own.

As part of the sponsored post, I am required to include a few talking points – and instead of trying to reword them and possibly getting the message wrong, I’ll just paste them here:

I don’t know that I ever thought the words “Healthy pizza – yum!!” – even though pizza isn’t something I consider unhealthy, either. It contains a pretty good balance of the main food groups with which I grew up (I understand that we don’t necessarily go by that model anymore, but I grew up with it being imprinted on my brain!) – starch/carb, vegetable, dairy, meat, depending on the combination of toppings you choose. In any case, I don’t know that most people find the words “healthy pizza” appetizing, but this product may surprise you. 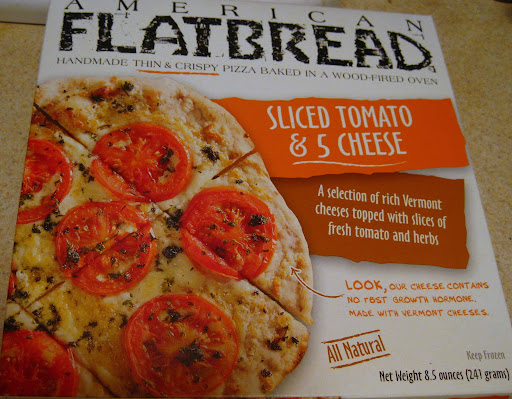 I sampled the sliced tomato and 5 cheese pizza. The first thing I noticed when I was hungry and pulled the box out of the freezer was that I had to thaw it for 15-30 minutes. Since most frozen foods ask that you not defrost them, I was surprised – and also very surprised because there’s a big variation there from 15 minutes to 30 minutes. I was also super hungry and didn’t like that I had to wait. 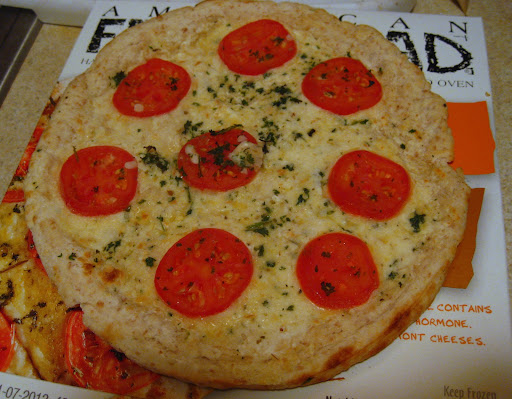 I pulled the pizza out of the wrapper and stared at it. Hahaha that doesn’t help defrost it faster. This is what it looks like when it’s frozen; not too far from the picture on the box, right? 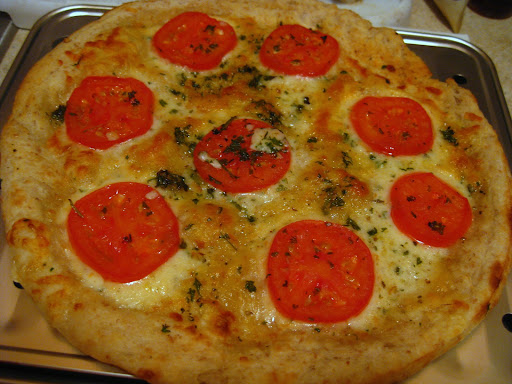 After it’d thawed for an appropriate amount of time and I’d preheated my convection toaster oven to 425 as the directions ask, I put it directly on the rack for the requisite time – 5-8 minutes, which I again thought was a pretty large variation. I had to keep an eye on it to determine which end of the spectrum my oven landed; I believe I left it in for about 8 minutes. Then I pulled it out and had to let it cool a little before I could eat. I’m hungry!

I pulled off part of the crust to taste, and was pleasantly surprised. Right out of the oven, it was a little soft, almost like pita or like the current pizza trend – neapolitan – where the pizzas are cooked so quickly, the dough puffs up a bit. There was a fair amount of salt in the dough, so my bite of the crust was very flavorful and didn’t suffer as “just the heel” of the pizza as lots of pizzas do. I actually liked it plain, which is unusual for me. As the pizza cooled, the crust became crisper, which I also liked.

When it was finally cool enough to eat without burning my mouth, I took a slice and began eating. The bottom stayed a little soft, but overall, there was good flavor throughout and the tomatoes remained juicy, and there was enough cheese on the pizza to satisfy. I enjoyed the entire pie myself – it’s actually only 670 calories for this entire pie – over the course of an evening of watching TV, and didn’t feel grossly full afterwards. Paired with a nice salad, this would make a satisfactory meal for one or two people with smaller appetites.

Overall, despite my frustration at the heating instructions – the times need to be more specific/narrowed down a bit more, and defrosting/thawing should be in BIG LETTERS so anyone who buys this knows that they have to do this (I know I can’t be the only person in the world who is impatient and/or only pulls food out when I’m hungry, as opposed to half an hour before I’ll be hungry) – I was pleased with my American Flatbread pizza. It tasted good, and it satisfied without being greasy or feeling particularly indulgent, fatty.

I could definitely see keeping one or two of these in my freezer for those nights when I really just am too tired to cook but don’t want to veer too far off the path of healthy eating. Give it a try and let me know what you think!