My last trip to NC found me returning to NYC with the horrible realization that I’d failed to visit Allen & Son’s, where, by all accounts (ie, the friends I have whose food opinions I respect deeply), amazing BBQ can be had. So this trip, I made a special point of hitting up the charming shack at the intersection of big road and other big road, pulling into what I think was a parking spot in the lot out front just as rain started falling, mistily, over a chilly NC. 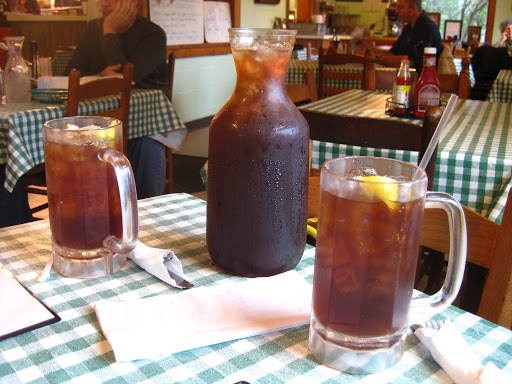 One of the few times I wasn’t flying solo in NC – we both ordered sweet tea because southern BBQ is not southern BBQ without a lil sweet tea. Bright, fresh, and the entire jug just deposited on our table unceremoniously with two full mugs. I don’t believe we put much of a dent in that jug…

Though I was there for the BBQ, when I saw this listed as the day’s special, I stopped in my tracks. Guess it was gonna be a two-lunch kind of day!

My perfectly fine salad, though I picked off the onions. I don’t think I recall the last time I had Bacos … (and yes I ate all of the veggies because I like salad a lot.)

Hush puppies! I’m not a hush puppy kinda gal, but these were tasty.

Then the fried chicken came. The potatoes and pinto beans were nothing to write home about – nice sides that fluffed out the meal – but the real focus was on the chicken. Unfortunately, though the portion was massively generous – to the tune of three pieces – it was only OK. This was not the fried chicken I was looking for (yes, I just quoted Star Wars in a food post; what?); it lacked the crisp exterior, hot, moist interior I seek in fried chicken. Good – but not quite what I would call excellent fried chicken.

Thankfully, I wasn’t there for the fried chicken.

The price on their website lists the BBQ sandwich at $3.75 but I somehow can’t believe it. In any case, one of the weird quirks about me is that I generally prefer to eat my pulled pork straight – without bread. But I didn’t want an entire platter – not on a two-lunch-day – so I ordered the sandwich. When it arrived, however, the bread just looked so perfect, that I picked it up and took a bite. And another. And another, then another, and nearly couldn’t put it down before it was finished. The bread was soft, squishy, and the perfect foil to the tender pork within. The cole slaw added a bit of crunch, but the pork itself was seasoned so nicely, so perfectly juicy and delicious, that I was happy as could be. I can safely say that this is the best pulled pork sandwich I’ve ever had; infused with flavor, not too fatty/oily, the perfect amount of pork to bread ratio, with a bit of crunch… it was just PERFECT.

It’s safe to say that I will make a point of returning on my next trip.

I’m sad that the fried chicken didn’t work out, but knowing that this pulled pork is waiting for me to return, I’m sad no longer.

If you visit the area, you have to make time for a stop at Allen & Son for a BBQ sandwich. Do it. You won’t regret it. Unless you don’t eat pork… in which case, you probably hate my site because I eat a lot of it 🙂