One of the extra fun parts of my most recent trip to SF was reconnecting with friends I’d met once a long time ago (the internet makes it easy to keep in touch!), friends I’ve never met (the internet makes that possible!), and making new friends (okay, that was just meeting people through other people, friends of friends, so I can’t make an internet comment there… OR CAN I?). (No. No I can’t.)

The first few days I was there were filled with press events, trips, and Foodbuzz Fest, which I’ve now attended 3 out of the 4 years they’ve convened. The first day of the conference – Friday – I registered, then headed to Turtle Tower before meeting up with Jeters… who I actually met at the first or second Foodbuzz Fest that I attended years ago. She lives in the Bay Area, and we’d kept in contact via Twitter for a while. Earlier this year, she’d visited NYC and we met up for bites and bevs (I was on the wagon at the time), and had such a good time that I made sure to let her know when I’d be in town so we could continue the giggling.

Our first stop, which I did not document was Burritt Room, which was ultra cool… felt like a speakeasy, a fantastic cocktail menu, and housemade bitters lined up on the bar. We luckily snagged a small couch pretty quickly, and settled in to catch up. I mention this mostly to tell you about the drink I had: the Grapefruit Buck, which normally contains vodka, elderflower liqueur, ginger beer, and grapefruit bitters. If you know me, you know exactly why I wanted that, and what I changed… yup, I asked for Bombay Sapphire instead of vodka. I worried that the ginger beer – one of my less favorite things in the world – would overwhelm and make it too gingery for me, but I needn’t have worried; it was perfectly balanced and made the entire drink so easy to drink, I actually had two… or three… of them before we continued to our next destination.

Seriously, if you like craft cocktails, Burritt Room is a must visit.

Jeters was pretty hungry by then, while I was okay – I mean, I’d just had a huge bowl of pho at Turtle Tower before we met, plus snacks at the happy hour mingling event for Foodbuzz Fest – but I was game for food. When she suggested Hops & Hominy nearby, describing it as Southern food, I was definitely game. It’s no secret that I am, deep down at heart, a southern girl by appetite and palate… 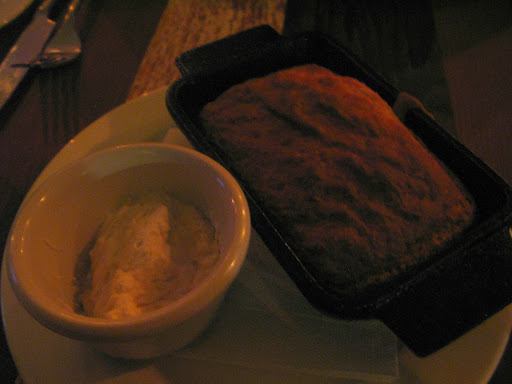 We started off with hot cornbread with a lovely whipped honey butter. Not bad… I was digging the screaming hot cast iron pans, which, while inebriated, was not easy to remember not to touch. 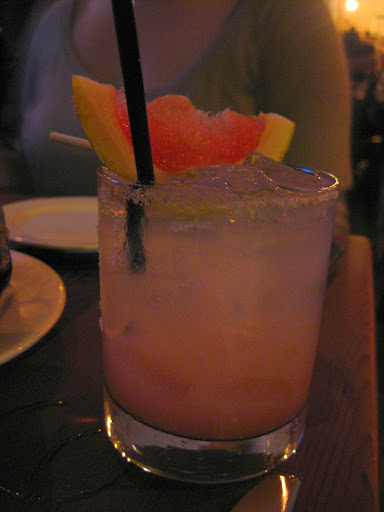 More alcohol, please! Another grapefruit and gin concoction, though this one wasn’t quite as finessed as the one I’d been drinking at Burritt Room. Luckily, I was fairly gone by this point, so no worries on noticing the subtle differences. 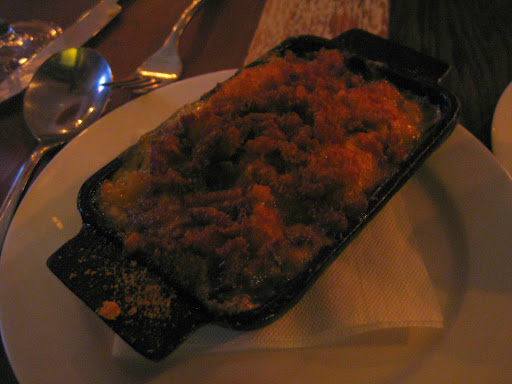 We also opted to split a bacon mac & cheese, which both of us enjoyed a lot. I often find that mac & cheese baked like so can be very mushy or one-note in taste, but the crumbs on top and the bacon really livened it up. 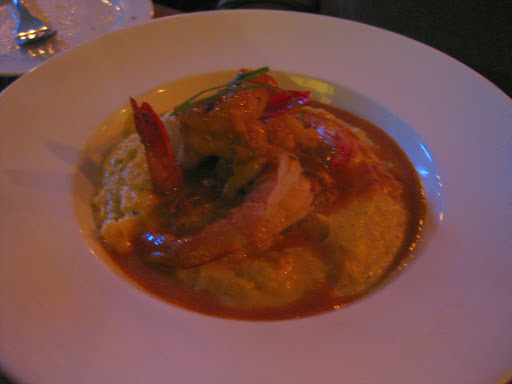 Jeters ordered shrimp & grits, and offered some to me, but I declined. She seemed happy with it. 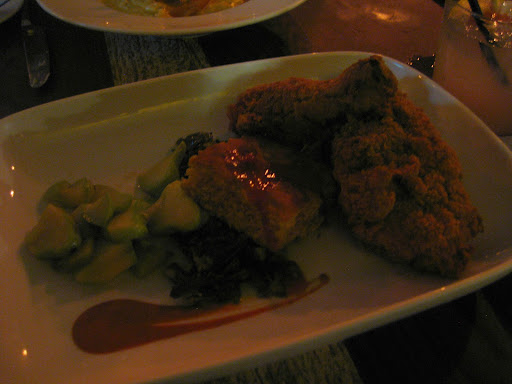 After I saw fried chicken on the menu, there was no talking me out of getting it. I love fried chicken. And this was crisp on the outside, moist, but wait what’s this? The texture of the meat itself was off, which, I firmly believe that had I been sober, I would have realized was because it was undercooked. I’ve eaten chicken that is less than fully cooked in the past – for a number of reasons I won’t get into here – and there’s a telltale softness, pliability to the meat when you eat it. It was very dark in there – as you can tell from my pictures – but I just shrugged it off and ate, because I wanted to enjoy the crisp exterior and very soft inside. I enjoyed my chicken.

Then we stumbled off into the night, and went our respective ways. Except I woke up later with this weird ache in my stomach – not full out “I WANT TO DIE” type of pain (which I actually prefer, because I know it can’t and won’t last), but the kind that makes me want to stay indoors, close to familiar facilities, and not want to eat.

Which is the saddest part… not being able to eat. Really, especially at the start of a vacation that promised to be almost entirely food-centric… I was most bummed abut being out of commission the entire Saturday.

*shakes fist at Hops & Hominy* Okay, granted, had I been paying more attention or less inebriated, I’d have said something and likely not gotten sick. And I didn’t get that sick, but still.

(When I was sick and whiny, I mentally reviewed what I’d eaten the previous day and thought about everything. My memory told me that it was the chicken. When I drink excessively, I tend to just accept things and not question them.)

A few days later, I met up with V, with whom I’d been internet friends since… umm… 2001 or 2002. Literally. We’d never met, but had chatted on and off through the years… while she lived in Toronto and I live in NYC. Funny enough, she saw on Facebook that I was in SF, and messaged me to ask if I wanted to meet up. It turns out she lives 5 blocks from where I was staying – what a weird and wonderfully small world! As such, she chose a place that was between both of our places – Beast & the Hare. 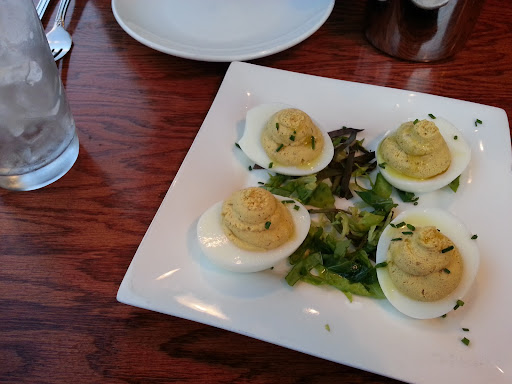 I’m sure it won’t surprise you that I love deviled eggs! but I have to stop ordering them in restaurants. Only once did I have them in a restaurant where I was like, omfg these are awesome and better than the ones I make at home!!! – and that’s because they were served on pieces of pork cheek, deep fried. These were OK – the eggs weren’t overcooked or rubbery, at least – but the centers were fairly blah and boring, with no texture of which to speak, and just mehhh-tastic. 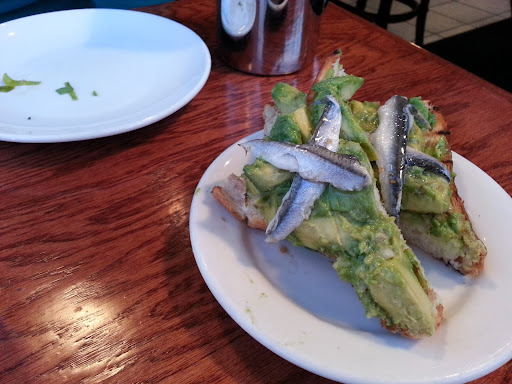 This, on the other hand, I must make at home: avocado toast with boquerones. I feel like avocado toast is a very California thing; I don’t know many people in NYC who eat avocados like this. Basically, a piece of toast smeared with mashed avocado, sprinkled with a bit of salt or whatever, lime juice, it’s personal and customizable. This was fantastic: thick, crusty toast spread liberally with barely mashed avocado, then topped with boquerones, a type of fresh anvhovy. Salty, pungent, oily, and vinegary (they’re briefly marinated in vinegar), they were the perfect compliment to the creamy, fatty, delicious avocado, against the crusty toast. Seriously, this is the perfect bar snack… okay, it might leave you with fish breath, but whatever, I don’t go to bars to pick up on people. I would happily order this again. 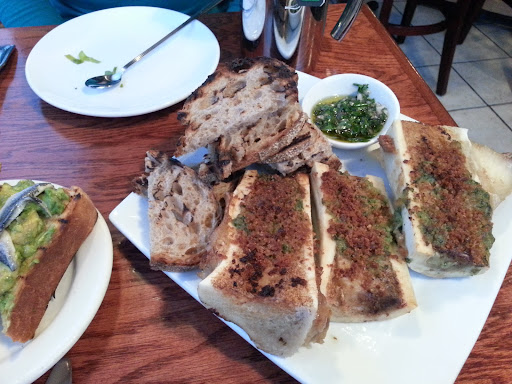 And because we could, we also ordered bone marrow. This was only okay – something was off about the seasonings, and while the side dish of a chimichurri-like condiment was appreciated – particularly the acidity of such, to help cut the fattiness of the marrow itself – overall, it just fell flat. I wouldn’t order this again. 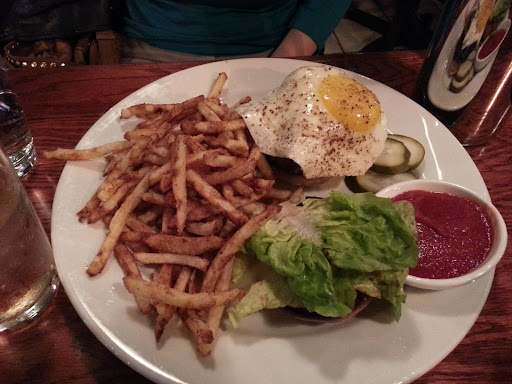 V ordered the burger, which she’d yet to try – this wasn’t her first time there – and enjoyed it greatly. I still don’t know how she managed to fit that huge thing into her mouth. 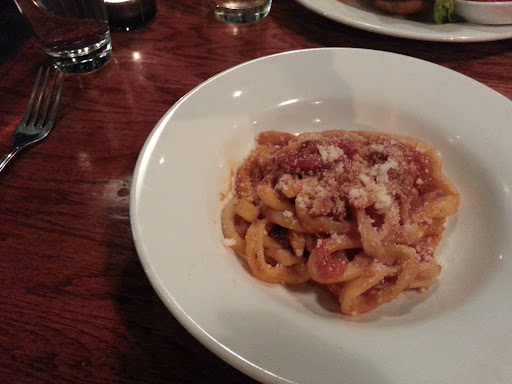 Sometimes I just get it in my head that I want pasta, and that’s what happened this night: I saw bucatini alla’matriciana on the menu, and wanted it. So I ordered it, and the pasta was perfectly cooked, slightly sweet from the San Marzano tomato sauce coating it. Thick sauce, lightly sweet, lightly savory, hit just the right spot that night, and I was extremely happy with my choice as I slurped down each strand. Granted, it was a small portion that left me wanting just a little more, but that’s okay; I’d eaten quite a lot already.

The meal at Beast & the Hare had ups and downs, but enough was good that I would have no issue returning to dine again. It’s also rather close to where I spent a lot of time, which I foresee happening again in the near future 😉 Prices were also pretty reasonable – with tax and tip, it came out to around $30-35/person. Not bad, right?

And a few days after that, I met up with Jeters again – who was so kind as to visit her father and bring me some OMFG WHAT FRESH AVOCADOS OFF HIS TREE YES I SAID HE HAS AN AVOCADO TREE IN HIS BACKYARD – ahem excuse me, just dreaming of awesome past meals… and we went to nearby Rosamunde for sausages.

Laugh all you want. They were damn delicious. 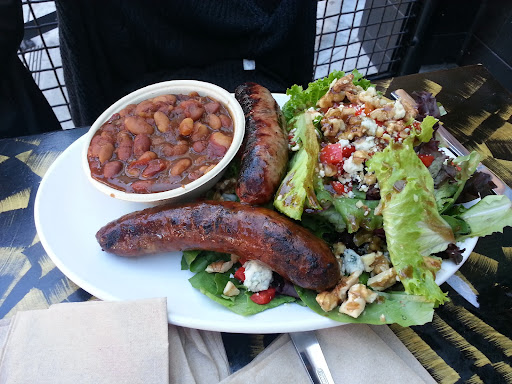 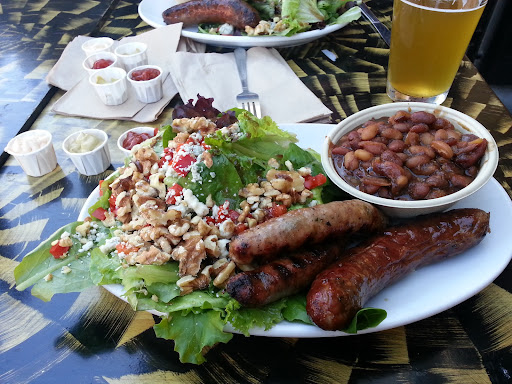 Both Jeters and I opted for the 2 sausage platter, as the price was just too hard to pass up. Each sausage is $6 or so, but the two sausage platter was $12.75 and came with baked beans (eh) and a huge green salad with walnuts and blue cheese. She chose the veal and chorizo, while I had the regular and duck. I didn’t like the duck – too dry and overcooked – but the veal was super juicy and delicious, while the chorizo was good too. The regular was… okay. 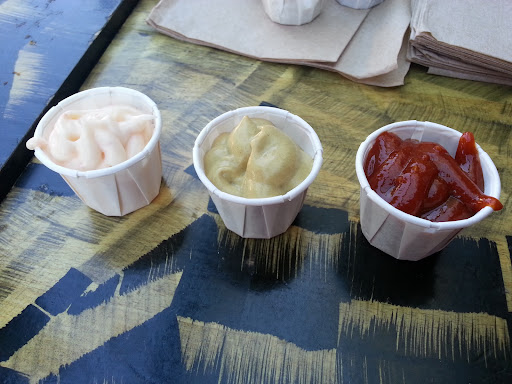 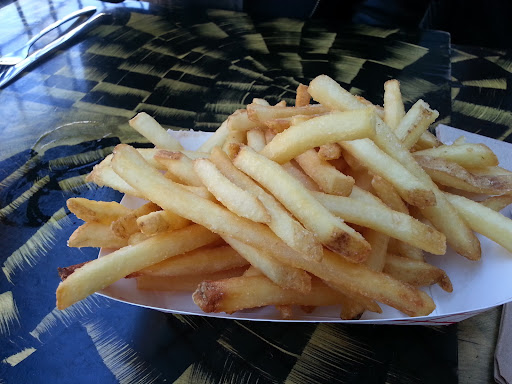 There was also a nice selection of sauces for dipping/spreading – curry ketchup, wasabi mustard and rosemary garlic aioli. I liked all three quite a bit. We also split fries, which were really freaking good – perfectly crisp, soft potato insides with a nice exterior that held up to the sauces. I really enjoyed our meal, and though I didn’t take advantage of the excellent beer selection, I did take note of it. I even dragged SFG there later in my trip for a return visit, where we got a platter to go and ate it at home while watching Walking Dead. YUM. Well, not the zombies part. But the platter, yes!!!

This is definitely a fantastic neighborhood joint, so it’s nice that it’s only a few blocks from SFG, and the prices are really good too. Surprisingly, they just opened a location in Williamsburg, Brooklyn, and the prices are at least $2 more for each sausage. Crazy! Oh, and they have a huge selection of different sausages, and some special ones they rotate on and off the menu, so be sure to check the board. I am excited to go back and try other types of sausages.

Summary: I probably won’t return to Hops & Hominy, due to the location and the overall experience being mediocre (it’s not in an area I really hang out for dinner or such; near Union Square). However, Burritt Room is a few blocks away, and I can totally see myself going there for a cocktail or two again, as they were delicious! Beast & the Hare and Rosamunde are both close enough to where I am regularly that I definitely foresee returning again, to enjoy their delicious and reasonably priced offerings… yum!