I actually spent a few days in wine country this year for my birthday, and ate more than just Thomas Keller establishments. SFG mentioned several times – okay, more than several times – how much he’d loved Schramsberg when he visited on his sole trip to Napa Valley 5 years ago. I’d shamefully never heard of Schramsberg previously, and was game to take a tour… unfortunately, they were all booked when we looked online. Then, the clouds parted and the sun shone through – ‘ahhhhh’ – and we were squeezed in for the industry tour, which had a slightly more informational slant (so we were told) than the regular tour. Yay! 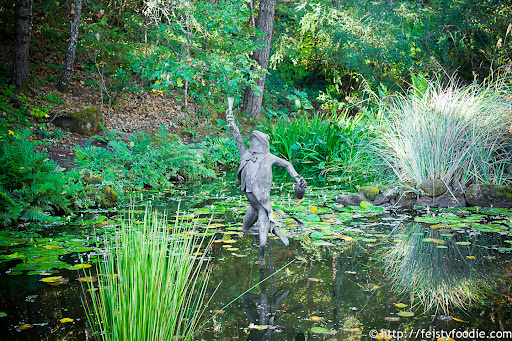 The infamous Riddler’s Night Out; SFG actually has a poster of this. I took a few snaps to see if I could top the poster 😉 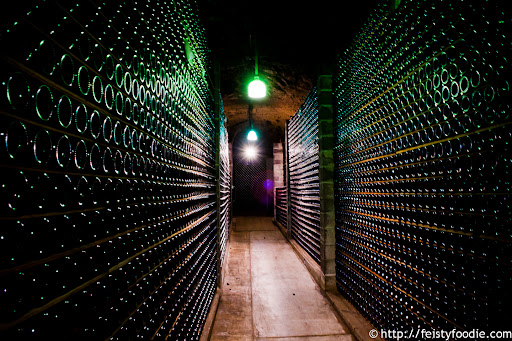 The grounds themselves – where I took few photos – were gorgeous and our tour was incredibly interesting. There’s a house on the property that was made over a hundred years ago by a shipmaker, hired by Mr. Schramsberg, that doesn’t look dated – though it doesn’t look modern, either – that uses no nails in its construction, everything was tongue-and-groove. That is pretty freaking cool in my book! (And you can see the house here.)

Above is the photo I took looking down through the caves. Schramsberg hand-riddles their bottles, one of the last remaining (or was it the last?) sparkling wineries to do so. Riddling is a method of turning the bottles very methodically and slowly to get rid of sediment. While they explained the entire process to us and even demonstrated part of it, I will leave it to Wikipedia to thoroughly enlighten you. 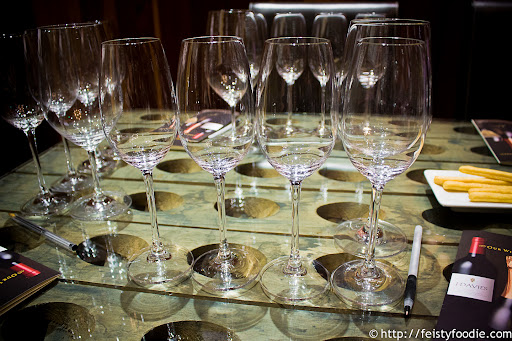 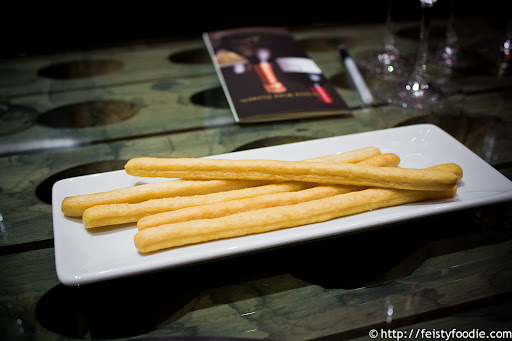 Then it was time for my favorite part: tasting. I have a real fondness for sparkling wines – it borders on unhealthy. I drink sparkling wine with pizza (thankfully? I don’t eat pizza often), finding the sweetness and the carbonation cut through the acidity of tomato sauce and just really go well together. (People laugh at me, but seriously, try it. I don’t buy anything expensive, either: I generally get Martini & Rossi, Asti Spumante, which is on the sweeter side, and runs a little over $10 a bottle. It’s my everyday sparkler.) However, I’d never had Schramsberg, and it’s a little out of my price range for an every day sparkling (and my casual searches for it in NYC haven’t turned any up – I haven’t thoroughly scoured the city, and know I could probably find it at the bigger places like Astor Wines or Union Square Wines, but I’ve mostly just popped into stores as I walked by)… so I was excited.

I was not disappointed. It’s true that the range of sparkling wines we tried varied to my tastes – some were absolutely delicious, while others were simply good, but the fineness of the bubbles was apparent, lending an almost creamy taste to the wines. I loved it. I’m in love with this sparkling wine, and of course, it’s currently out of my reach… sigh.

I’m retiring Veuve Clicquot as my favorite sparkling wine. Sorry, Veuve; it’s been a happy 12 years, but I’m moving on.

If you like sparkling wines, history, and are on your way to Napa, do yourself a favor and check out Schramsberg. You won’t be disappointed; it was a fantastic tour with delicious wines to taste at the end.

Oh, we also got to taste the J. Davies Cabernet Sauvignon, which is new-ish. They do a very limited run – something like 1500 bottles a season right now – but I picked one up as a thank you to my buddy who was watching my dog, Keywee, while I was out in CA (totally worth it – especially after my trip got extended a week due to Super Storm Sandy). I actually was fairly buzzed at this point so I declined a taste (I also don’t care for red wines in general) and gave over my glass to SFG, who was driving. Ha. 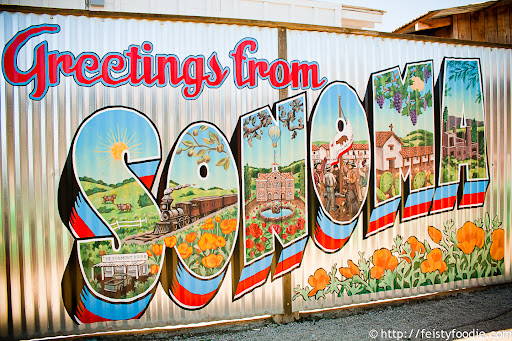 Once we were on our way, happy with our purchases, we headed over to the Fremont Diner, where SFG has wanted to visit for a very long time. He was excited, which in turn made me excited, especially four generous pours of sparkling wine into my day (oh, did I mention our tour was at 10:30a?). 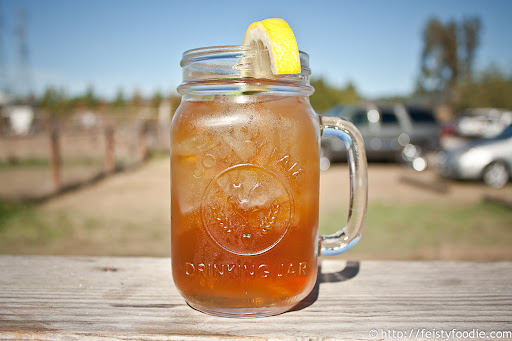 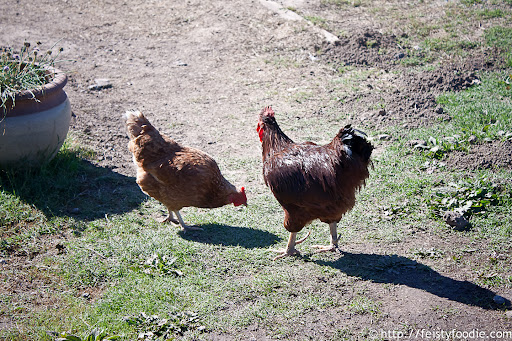 There was a brief wait, so SFG got an iced tea for me (it was fine) while I watched the actual chickens wandering the property. There were live chickens… just wandering around the property. It was a gorgeous, warm, sunny day in Sonoma, and we chatted a bit with a guy who was also waiting and told us he came here to eat at least once a week, asking him for some recommendations. He said that he’d had just about everything on the menu, and while everything was good, some stuff was definitely better than others… and warned us off the fried fish. As regular readers may remember, I LOVE FRIED FISH, so this was both disappointing but a relief, as I then didn’t waste time or money getting something I pretty much have to get every time I see it on the menu. 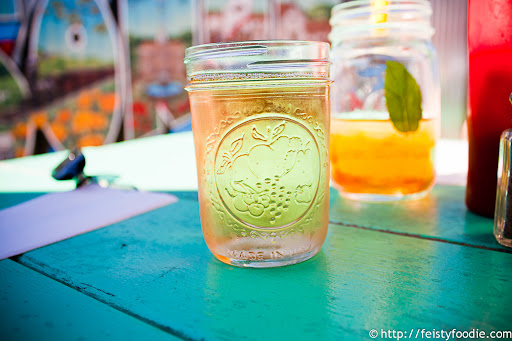 They had juice glasses of Domaine Carneros sparkling wine, which, prior to that morning’s visit was my favorite Napa winery I’d visited (for looks alone, though I’d enjoyed their sparkling wine as well). I was encouraged to order it and thought, heck, why not… 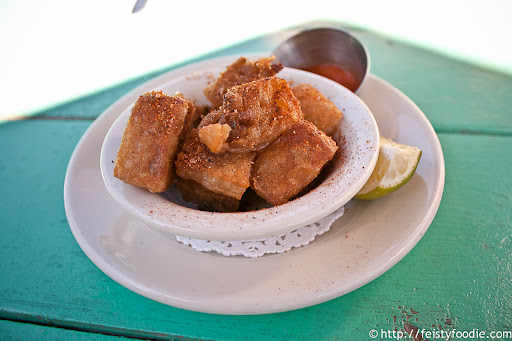 Then began our parade of food: you know I can’t hang out with people who don’t eat, and SFG, well, yeah, we like to eat. The above? Cracklin with house hot sauce. Um, yeah, fried bits of porcine goodness. Chewy, crisp, fatty, awesome… though I admit I had to slow down shoving these in my face, because eating pure fat makes me hit the wall rather quickly. 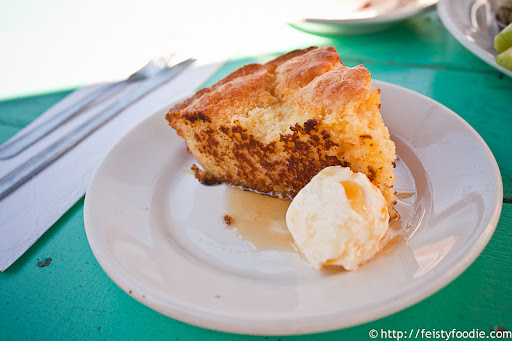 Cornbread with honey and butter… very moist and tasty, though cornbread is rarely my favorite thing. Nicely toasted on the sides, though. 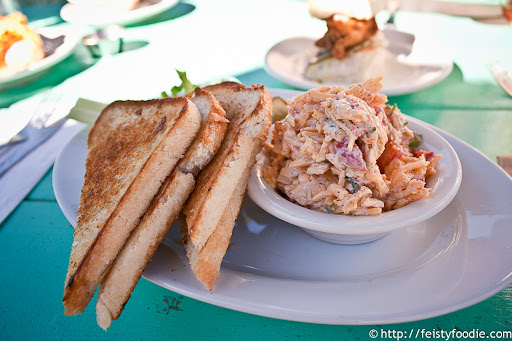 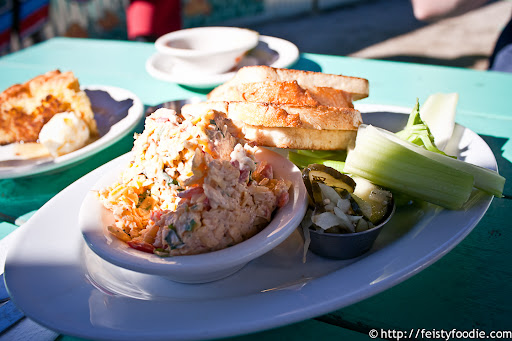 Pimento cheese… SFG mentioned something about pimento cheese, and I admitted I’d never had occasion to eat pimento cheese in the past. That’s probably true – though I THINK there may have been that one time when I lived in Texas for a few months – but this was unlike what I thought pimento cheese would be. I thought it was more smooth, like a spread or even liquid, but this was… shredded cheese mixed with sour cream or mayonnaise and spices/herbs/some sort of peppers? and was absolutely delicious. The texture – being able to feel the shreds of cheese – really added something to it. While I abandoned the bread pretty quickly and resorted to eating it on the celery sticks, I wouldn’t have minded eating it by the forkful. I must make this at home sometime (and this recipe here on Homesick Texan’s site sounds exactly what I was eating – and even has a comment from me, nearly six years ago, declaring my non-affinity towards football, whatttttt?)! 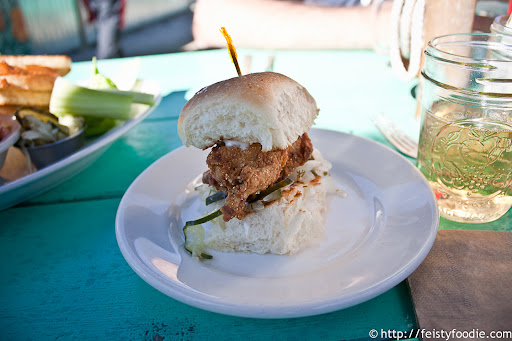 Sometimes I fixate on things. When I saw a mini fried chicken sandwich on the menu, I had to order it, even though we were already ordering fried chicken. This was good, but not special. 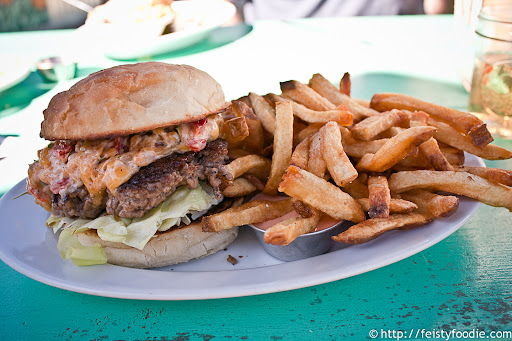 You can get one of their monster burgers topped with pimento cheese. So we did. And it was glorious… this was really very tasty. I enjoyed it a lot… even though it was super messy, haha. 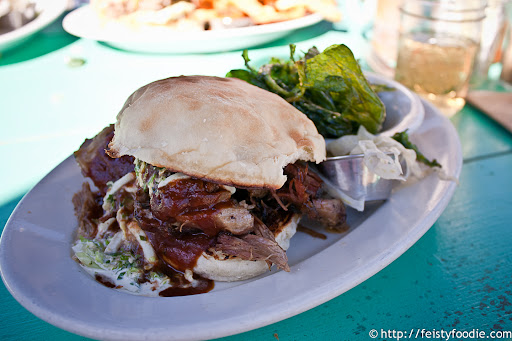 I told you – I hang with people who can and will eat! We also ordered this pulled pork sandwich… I was working in a BBQ restaurant at the time, so I wasn’t all that keen on ordering BBQ, but SFG wanted to try it. To be completely honest, we both ignored this in favor of other things. I tried a bit of the pork at one point, but wasn’t impressed and didn’t bother trying to pick up the whole sandwich to eat. The slaw on it was nice though – tangy and a little kick – but the pork itself was fairly dry and uninteresting. 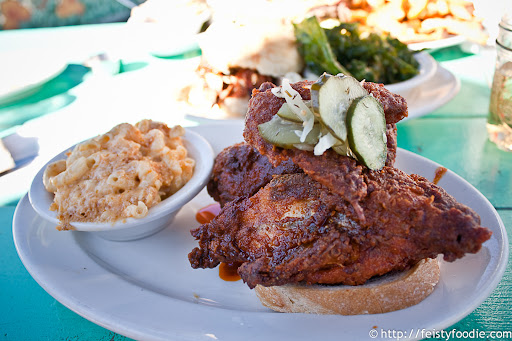 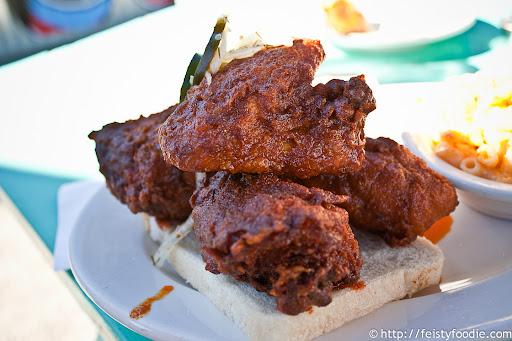 I was focusing more on this: Nashville Chicken, listed on the menu as “so spicy, it’ll set a cheatin’ man straight” – granted, neither SFG nor I have a cheatin’ man to set straight, but I love fried chicken. This wasn’t actually so spicy I wanted to curl up and cry, but had a nice kick to it, and some nice spices. It also wasn’t as juicy as I’d have liked, or crispy, but solidly tasty and I wouldn’t object to ordering it again. Of course, my heart was stolen by the pimento cheese, so I don’t know that I’d even make it this far down the menu when I return. Yes, when – there’s no doubt in my mind a return trip is in order, to sample my way down the rest of the menu – which changes every so often.

I thoroughly enjoyed my day letting SFG pick the agenda – and would happily return to either place, any time. Yum yum yum! I highly recommend either place for a fun day… maybe go to both… though they’re not very close to each other (thanks again to SFG for driving!). Fremont Diner is what you wish your local diner was like… though then you might be a hundred pounds heavier!