After celebrating Mother’s Day with CT’s family at Congee Village for lunch, we got together with my family later on for dinner. I decided that we should try a place that had been on my radar for a while and was also close to my apartment, which would please my Mom. Bistro Lamazou is a North African inspired restaurant that opened about a year ago by the owners of the famous neighborhood cheese shop a couple blocks north of the same name.

It turned out they were offering a special $38 four course menu for Mother’s Day. Pretty reasonable and there were a couple selections for each course. Between CT, myself, my parents and Aunt B we were able to order pretty much the entire menu. 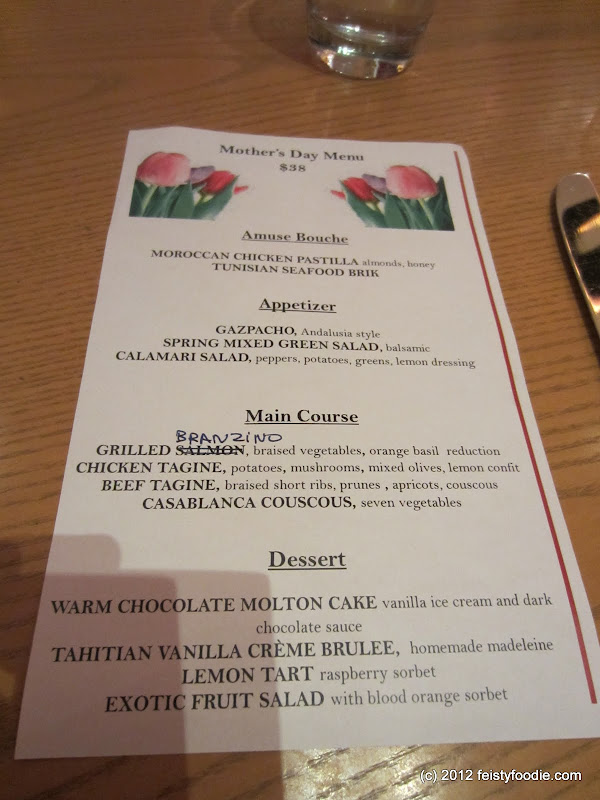 The first course was an amuse bouche, but technically it was two amuses since they gave us two different tiny bites.

Moroccan Chicken Pastilla(right) & Tunisian Seafood Brik(left). The chicken filled beggar’s purse was spiced appropriately with plenty of cinnamon and other North African spices, however it was a bit dry. The seafood brik was a little fishy tasting, but I ate it anyway. 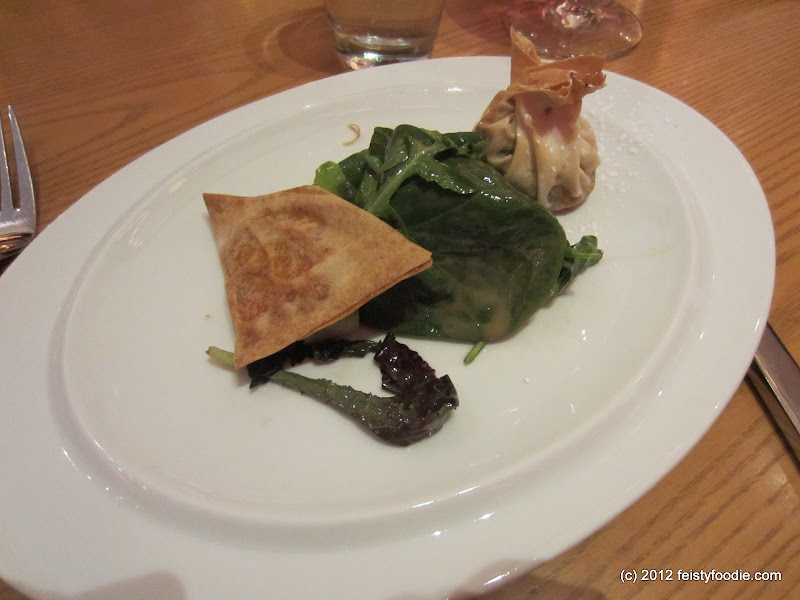 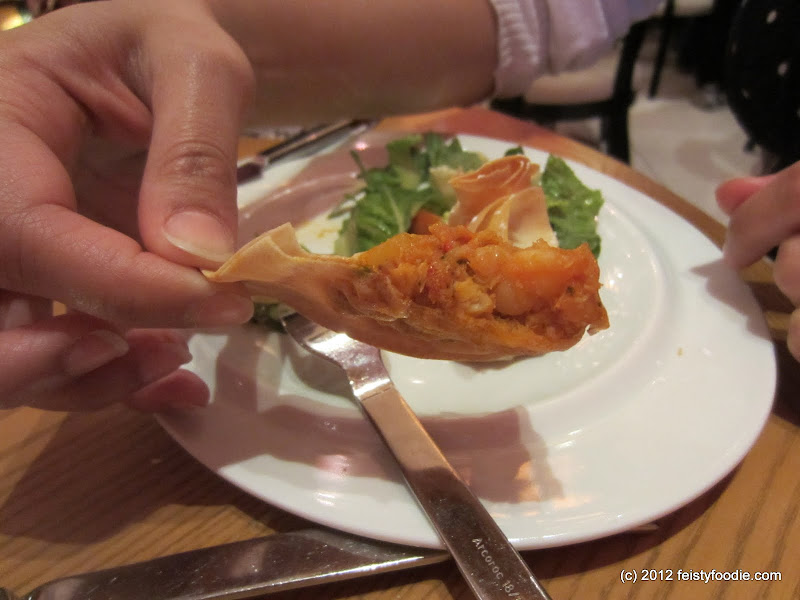 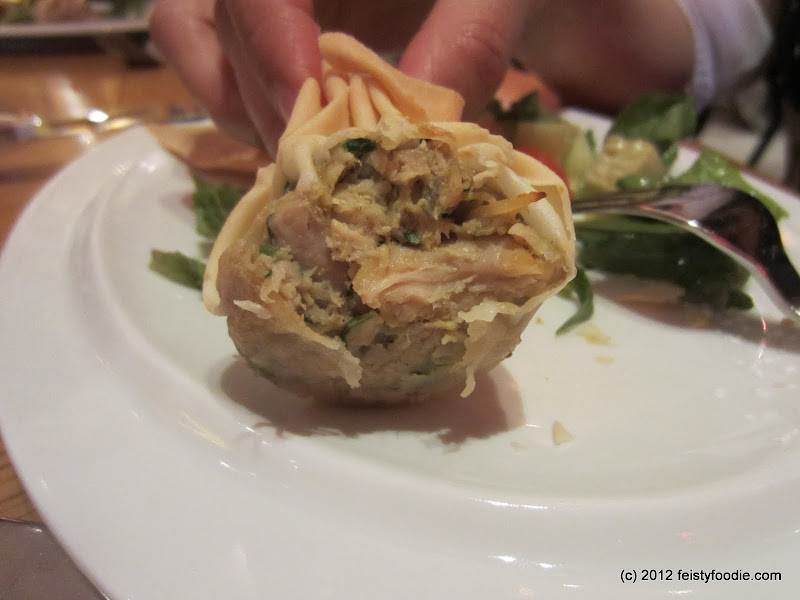 For the next course, four out of five of us ordered the Calamari Salad with lemon dressing. We were all shocked by the size of it. While it wasn’t the best calamari salad I have ever had, especially considering it was more of a pepper salad, it was quite tasty with plenty of tang from the dressing and the different textures of the ingredients. 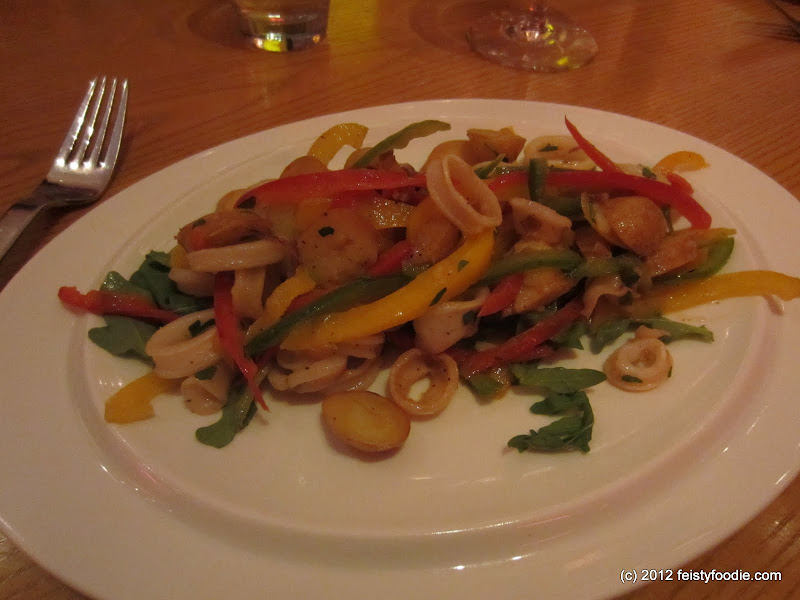 Aunt B was the oddball 😉 and ordered the Gazpacho Andalusia-Style. At least it wasn’t the boring green salad. I don’t remember her being too fond of this cold tomato soup. 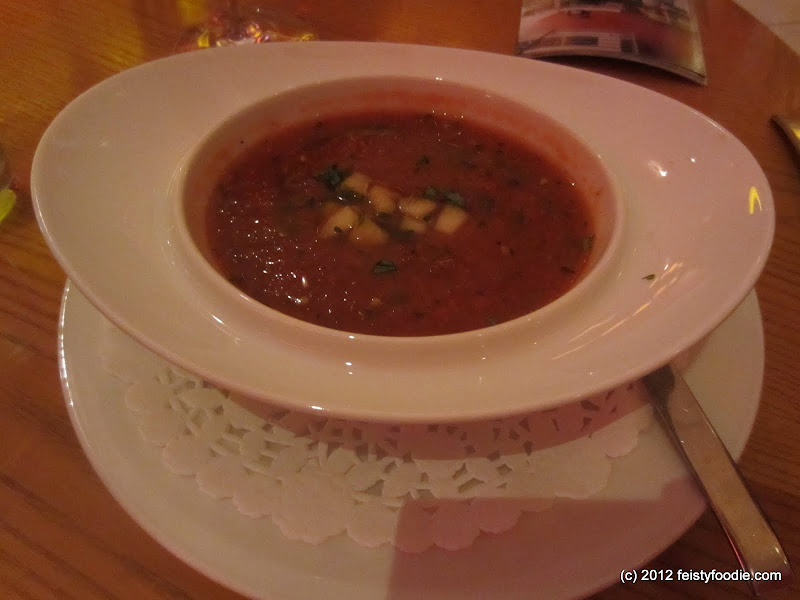 Mom & Aunt B had the Grilled Branzino with braised vegetables and orange basil reduction for their main courses. They both seemed quite content with their nicely grilled fish even if it was another big portion. 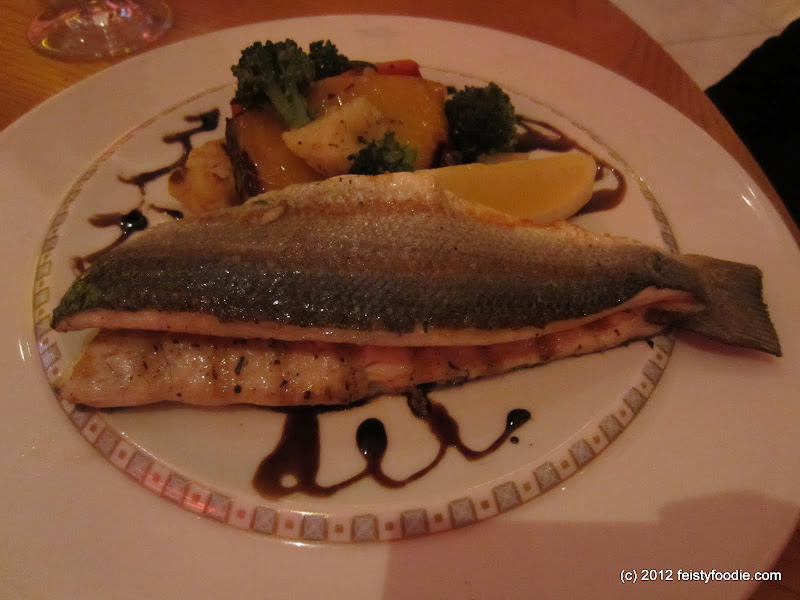 My Dad and I each got the Chicken Tagine with potatoes, mushrooms, mixed olives and lemon confit. There were two big and juicy pieces of chicken in the dish. The olives added the right amount of salt to the dish. The lemon confit added just a touch of tartness. I am pretty sure he enjoyed it as much as I did. 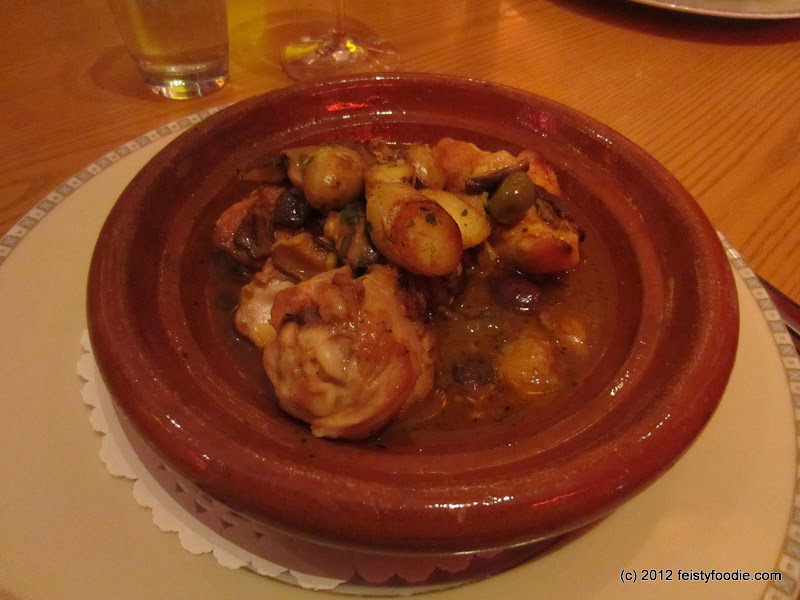 CT had the Beef Tagine- braised short ribs with prunes, apricots and cous cous. I found it strange that she got a side of cous cous, but we got nothing with our chicken. She was quite overwhelmed by the portion size especially since she was still full from lunch and the two appetizers. I had a taste and enjoyed it. The meat was very tender so it didn’t even need a knife. The dried fruits added just a touch of sweetness to the dish. 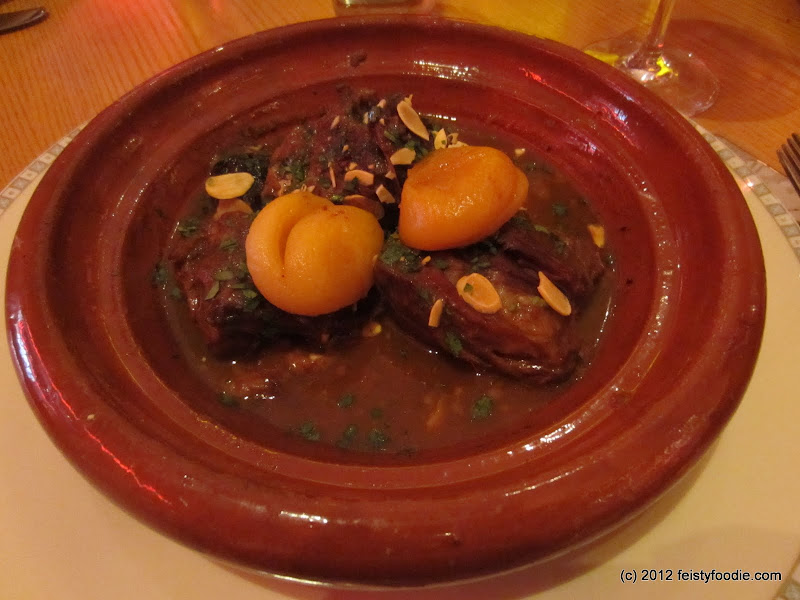 Although we were all full, we still had dessert on the way.

Of course Mom had the Warm Chocolate Molten Cake with vanilla ice cream and dark chocolate sauce. Unfortunately, it was not molten. Jean Georges was probably crying somewhere once my Mom cut into it and it was overcooked. However, it was plenty chocolatey for her so she still enjoyed it. 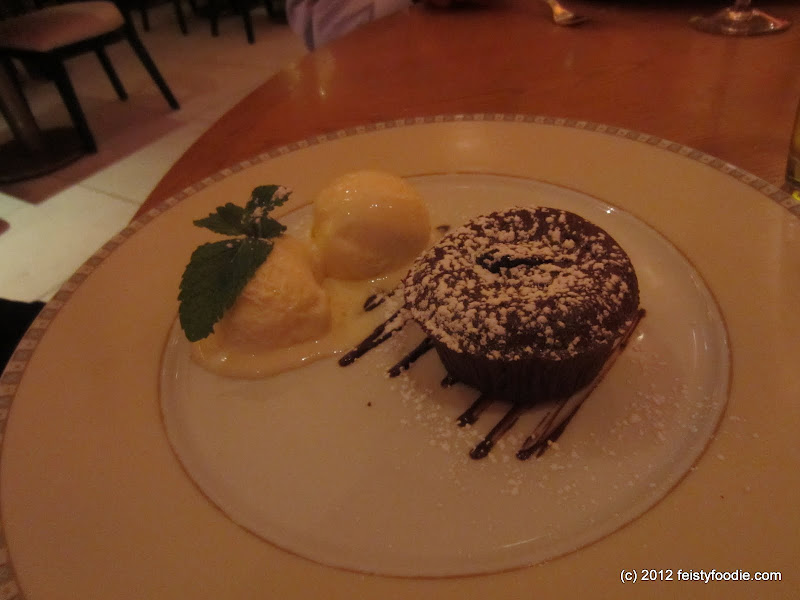 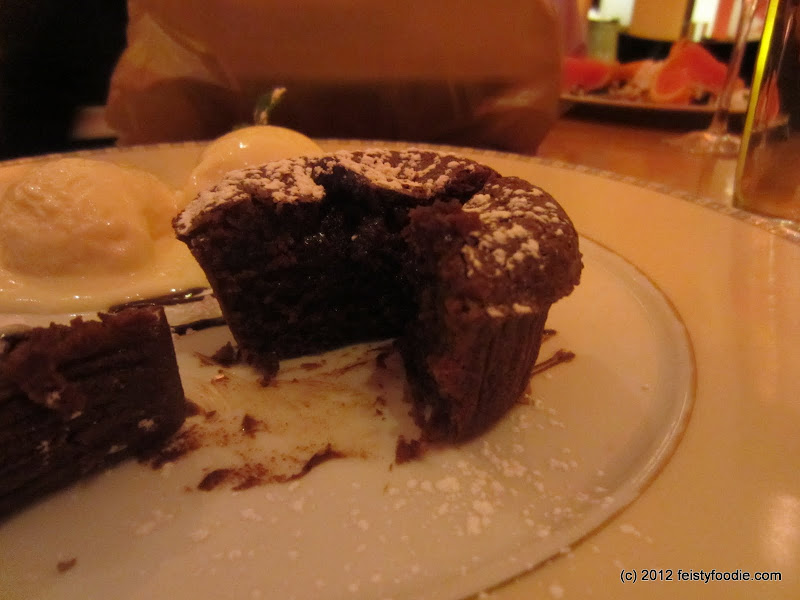 I went with my go-to dessert of Tahitian Vanilla Creme Brulee with homemade madeleines. It was quite a good preparation of creme brulee. The sugar was carmelized nicely without being burnt, while the custard was nice and creamy. I have had too many preparations in the past where you can just tell they leave the ramekin out and torch it ahead of time so the custard gets runny. It was not the case here. 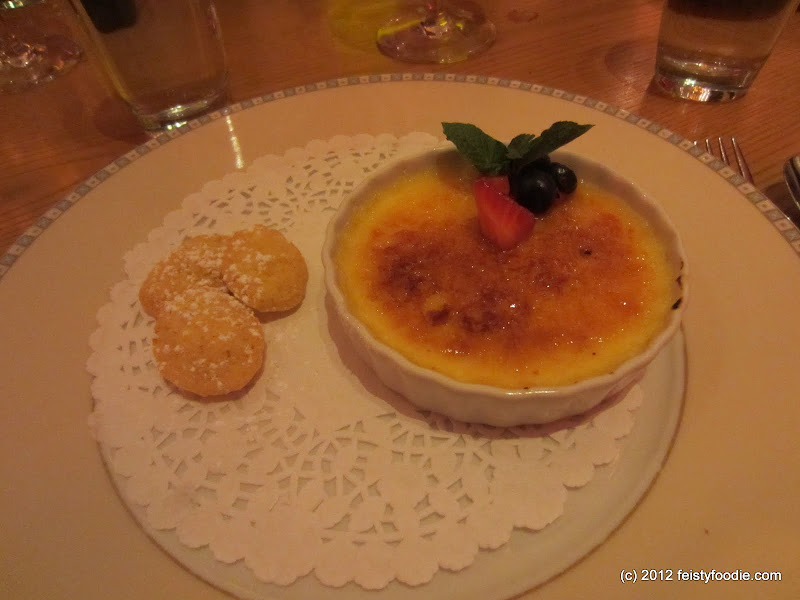 Dad and Aunt B took a risk and had the Exotic Fruit with blood orange sorbet. It was quite a surprise when this came out. Those orange slices were actually slices of sorbet. I have seen sorbet served in an empty fruit rind before, but never like that. They both enjoyed the dessert a lot. 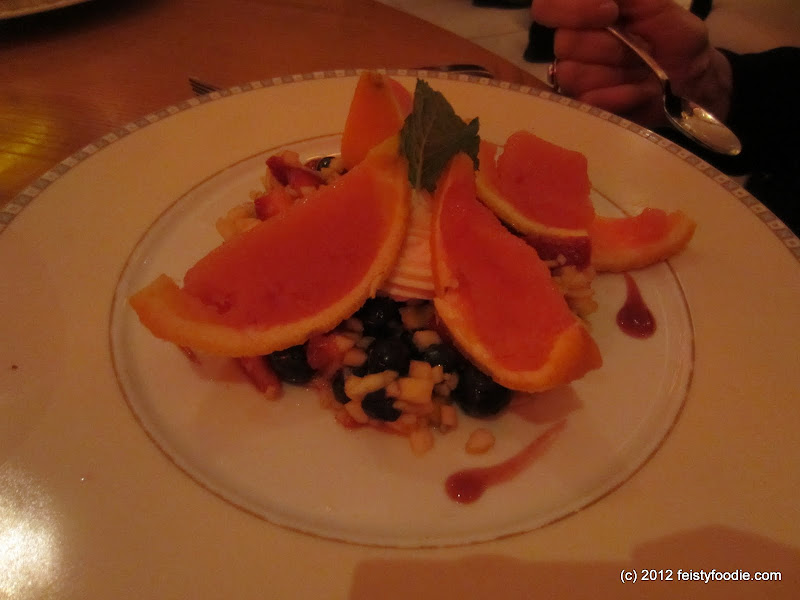 CT surprised me and had the Lemon Tart with raspberry sorbet. I would have thought she would have gone with the chocolate cake. It was a nice presentation with a well prepared lemon custard, however the shell was quite thick and hard to break into to. Since she wasn’t that hungry anyway, it was pretty easy to just scoop out some of the custard and eat it on its own or with the sorbet. 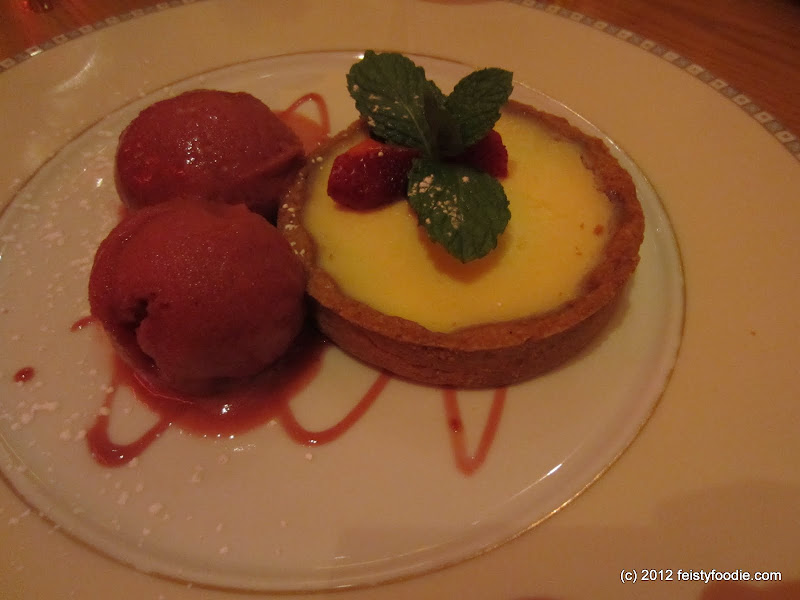 All in all, Bistro Lamazou was the perfect choice for Mother’s Day. The food was good and reasonably priced with the prix fixe. While it was hard to see any correlation to the cheese shop, besides the name, it was still a good restaurant that brought something different to the neighborhood. I hope you all had as nice a Mother’s Day as we did.