As I’ve mentioned a few times now, I’m on a really big Malaysian kick – dragging TC and DLS along with me to various Malaysian restaurants around the city. This time, TC and I returned to Penang – where we’ve both been multiple times in the past – and ordered some different dishes. 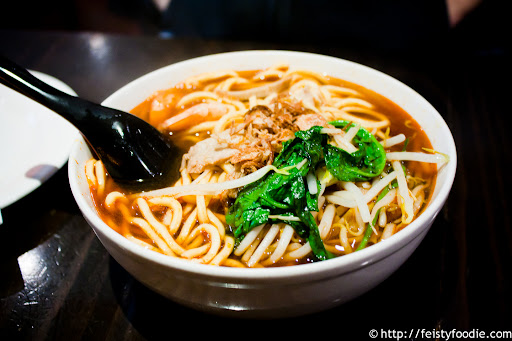 For TC, har mee or udang mee, which was not spicy enough and not nearly as red as the version seen at Satay.  He thought it was only OK, sadly. 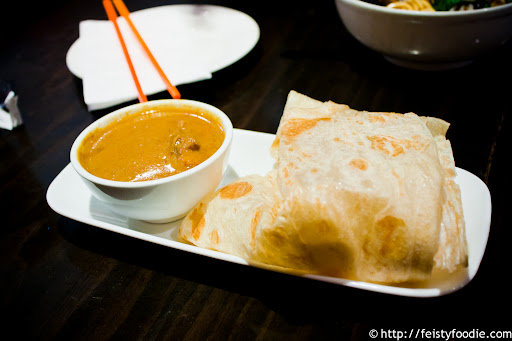 An order of roti canai, as is my usual. Crisp, pillowy, chewy, and just all around great, I do really enjoy their version. 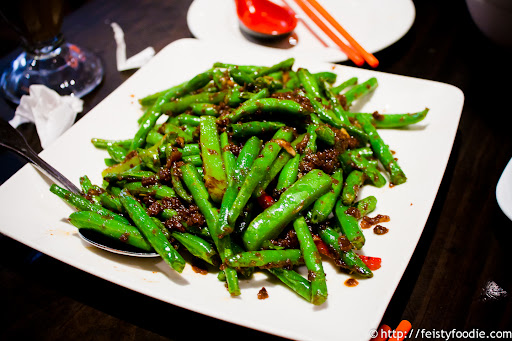 Trying to be healthy, we went with green beans sauteed with belacan – slightly spicy but very flavorful, lots of umami taste from the ground shrimp paste.  Really good and properly cooked, I enjoyed this a lot. 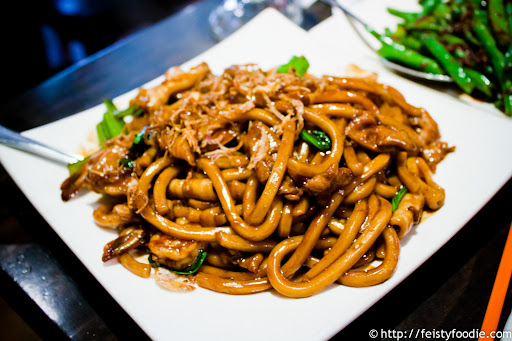 And for me, I forget the name of this dish (TC, help?!) but it was basically udon stir fried in a soy sauce gravy. I really enjoyed it, even if he chided me for it not being a real Malaysian dish… and not particularly unique, haha. Still very tasty! 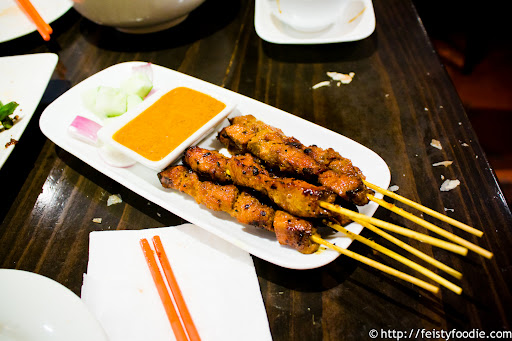 Last but not least, our beef satay, which was meaty, tender, fragrant and really good. I enjoyed it a lot!

Funny enough, a few short weeks later, FeistyMom wanted Malaysian for her birthday, so Snorlax, FeistyMom and I headed to the same location for dinner. 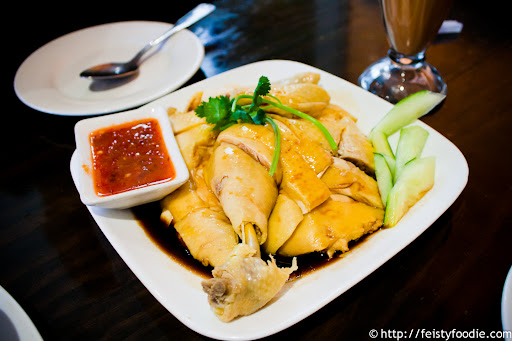 We ordered half a Hainanese chicken; the meat was slightly warm, and FeistyMom suggested it was freshly poached (this is a dish normally served cold). To no detriment here – the white meat was juicy, tender and delicious – and you know I don’t eat white meat normally, but I found myself gobbling this up. Fantastic; I’ll have to order it by the half more often… so good. 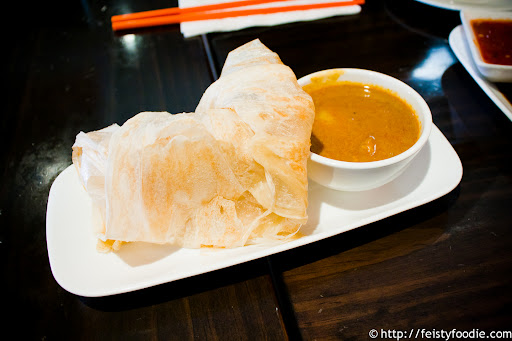 As I said, my standard order of roti canai, and it was great as usual. 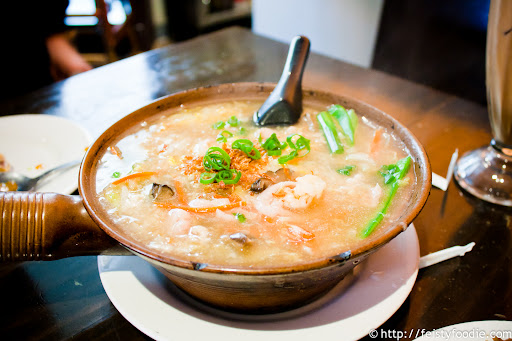 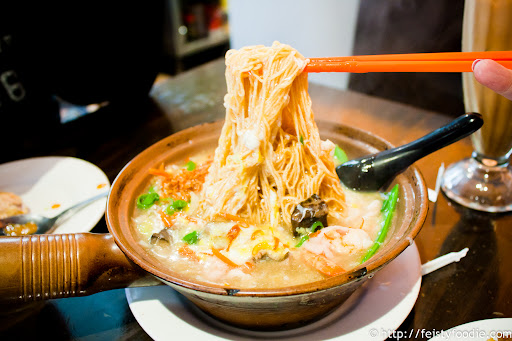 Clay pot noodles served in a clay pot (who knew?) in a thick broth that was reminiscent of egg drop soup, with a lot more sweetness from the corn than you might expect. Shiitake mushrooms, strips of chicken, squid, and big shrimp – just a fantastic dish. I found myself eating bowl after bowl of this long after my stomach requested that I cease & desist… chewy egg noodles coated with that broth, I really must order this more often as well.  (TC… when are we going again?!) 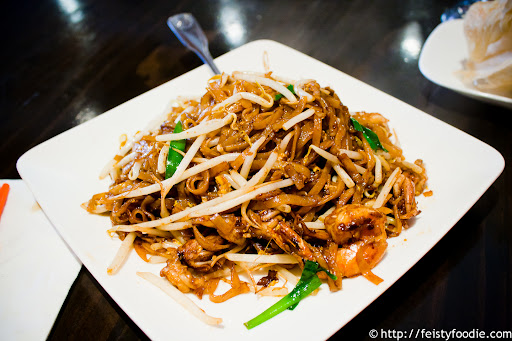 My choice of char kway teow went mostly ignored in favor of the other noodle dishes. I asked for this to be slightly spicy, and it was pretty spicy for my sensitive palate.. but still good. 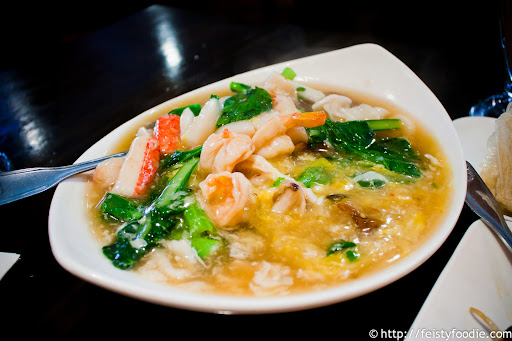 Snorlax requested and received ‘wat dahn ho fun’ or something (slippery egg broad noodles) – underneath the pool of sauce, which has a beaten raw egg mixed into it, are stir-fried broad white rice noodles. Though those fake-crab looking sticks on the side were awful (tasted like rice cakes but bad), the rest of the dish was absolutely delicious. We both had a lot of fun ‘fighting’ over bits from the plate, and just eating this happily… so good. 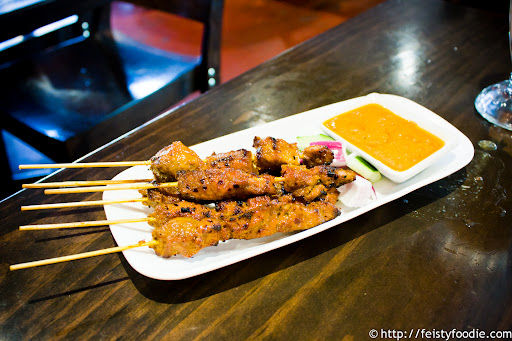 Then our beef satay came out; the only fail of the night. These were mushy and tasted OFF, like weird and bad. We did not eat more than a few bites each before we decided it wasn’t worth the stomach space; sadly, FeistyMom suggested something had gone wrong with the dish or maybe it’d turned. Regardless, the rest of the dishes were so great that I didn’t really notice the lack of satay in my belly that night.

As you can see, I visit Penang fairly frequently and really enjoy it; I don’t foresee that changing any time soon. That location has been there for a while, and while the quality has been inconsistent over the 15 years I’ve been visiting – I think they had a bad chef at one point, who appears to no longer work there – it’s now returned to serving some really excellent food.