After I posted about my experience with the Brindle Room burger, Yvo suggested we go back for a re-do to see if the burgers have indeed gone down in quality since she first started going there. Since Hungry from Tasty Eating felt the same way as I did about the burger, she came too with Mr. M&P, TC and DLS also came to round out the group.

(Yvo says: Actually, Hungry – who ate her burger with me – simply felt she should eat the burger without eating fried chicken first, to give it a fair shake.)

Like the Friday lunch I went to previously, the restaurant was EMPTY at 7:30 on a Monday night. Fortunately (for the restaurant), a couple of tables filled up as we were eating. They did seem to do a healthy amount of take-out/delivery, but who knows if that can sustain the place?

Thank you Yvo for taking all of the pictures!

Neither Yvo nor myself were in a drinking mood, so she had a sparkling lemonade and I had an Iced Tea. I enjoyed my tea, but had to savor it because I had a feeling they would have charged me for a refill.

Yvo says: Tart lemonade with a bit of sparkle, love! I love sparkling drinks. I really must remember to get a SodaStream so I can make all my drinks sparkle in the future… 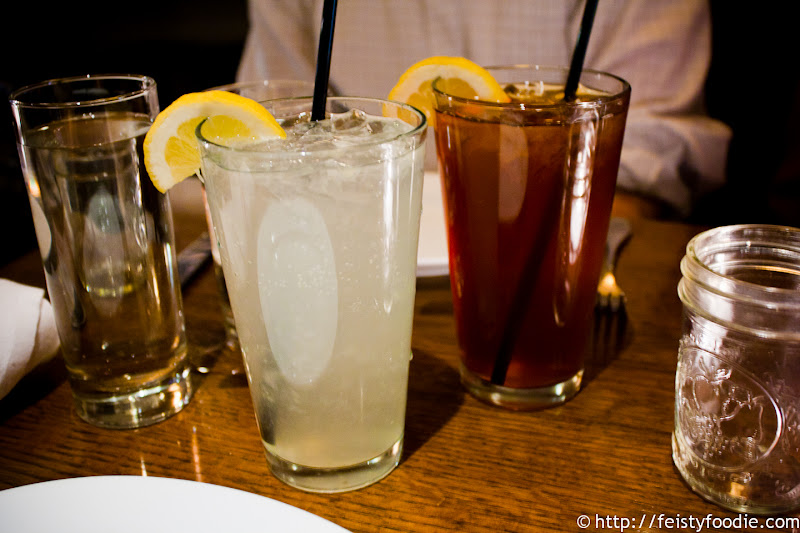 I was only there for the burger, so I passed on an appetizer. Didn’t want my judgement clouded, hehe.

DLS is quite the poutine-fiend, so he ordered that to start. Yvo remarked that she and TC had this before and it wasn’t that good. This time around she said it was much better. DLS made a valiant attempt to polish off most of it himself. I was impressed.

Yvo says: My problem last time had been how greasy and overwhelmed with duck fat the dish had been – all I could taste was duck! This time, the duck was shredded better, more evenly distributed, the portion was smaller, and the gravy slightly less fatty – never thought LESS duck fat would be a good thing, but there you go.  The frites remained crispy, and there was plenty of cheese curds and duck to go around.  The few bites I took were leaps and bounds better than previously. 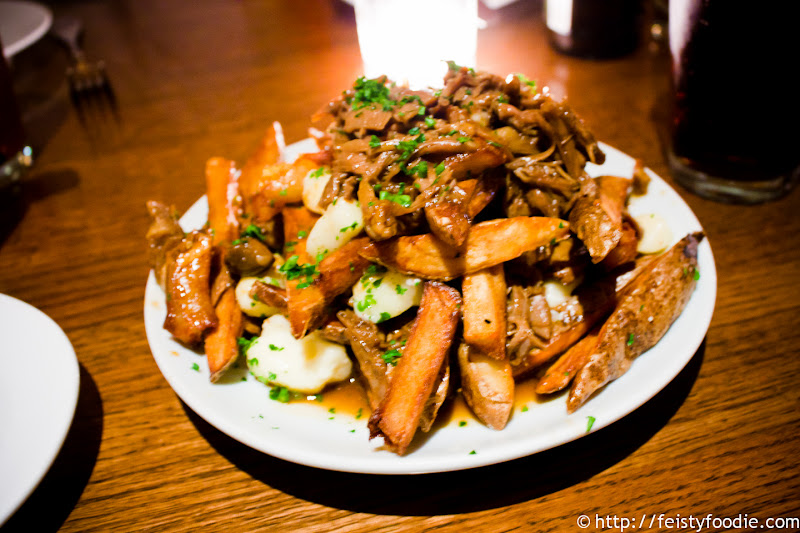 TC started with the entree of fried chicken and mashed potatoes (and later got a burger.) Yvo decided to have the fried chicken as her entree. TC enjoyed it, but didn’t think it warranted a $20+ price tag.

Yvo says: The photo of my plate of fried chicken doesn’t express my disappointment. I had REALLY enjoyed the fried chicken last time, noting how it remained crisp despite how long it took to get to the end. This time – it took a long time for me to eat (I was actually the last one still eating, but in my defense, everyone else was eating burgers!) – and the chicken was definitely not as great as I’d recalled. While still crisp, I had more white meat than last time (which was none!), and I just don’t prefer white meat.  The dark meat I did eat was only okay – not quite as juicy as last time – and I actually used some of the honey this time.  The sides were great as usual though. 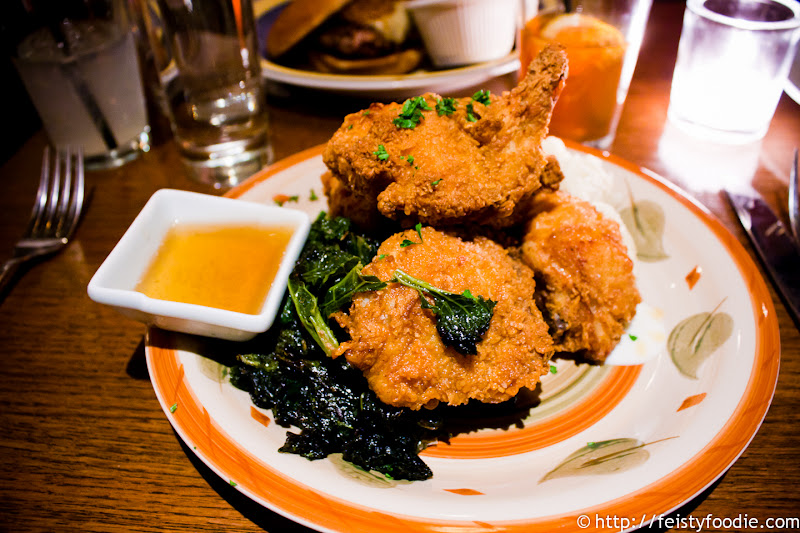 DLS had the burger for his entree, but like a good boy, switched out the fries for the kale salad since that’s Yvo’s preferred side.

Yvo says: No! he switched to kale salad because he had poutine to start and didn’t need/want extra fries. I had a bite of his burger – we’d agreed to split both the fried chicken and burger (but he wisely knew that it was going to be a lopsided split) – and noted that the bun-to-meat ratio was way off.  His burger patty barely covered the bun, while we noted TC’s burger (that came later) was overflowing from the bun.  Also, note that DLS did not get cheese, which I felt changed the burger… Overall, though, this was the worst burger I’d had at Brindle Room – not worthy of the praise I’d lavished on it in the past. I was incredibly disappointed. 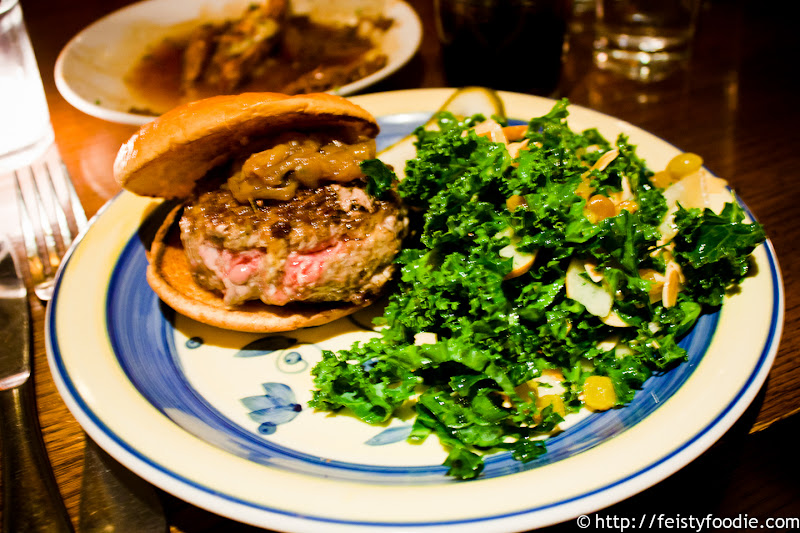 This time around I ordered my burger medium, instead of medium rare and stuck with the fries. I was once again impressed with the fries and enjoyed them a lot. Unfortunately, I seemed to get less fries than I did last time. 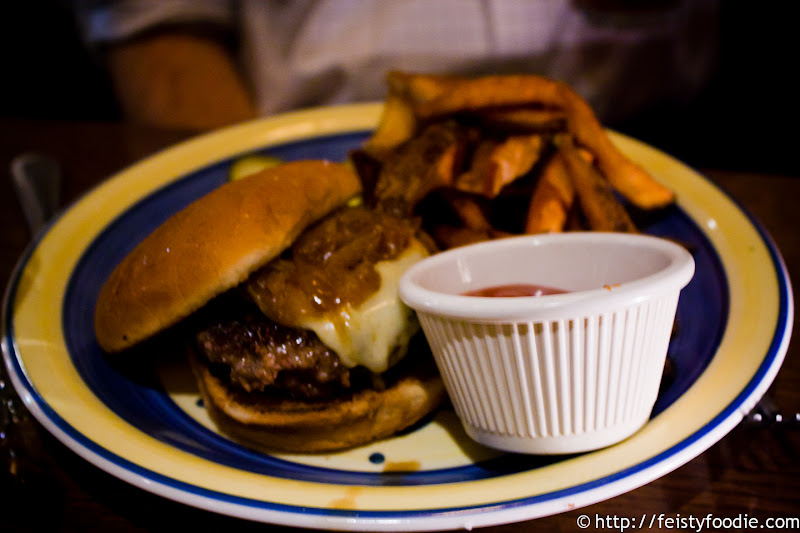 As for the burger, it was cooked more to order this time around which made it more “solid” in texture and therefore more enjoyable. It was better than last time, but worth the extra $2 charge for it at dinner as opposed to lunch? No. The burger was still small (about hockey puck sized) and the bun to meat ratio was off. 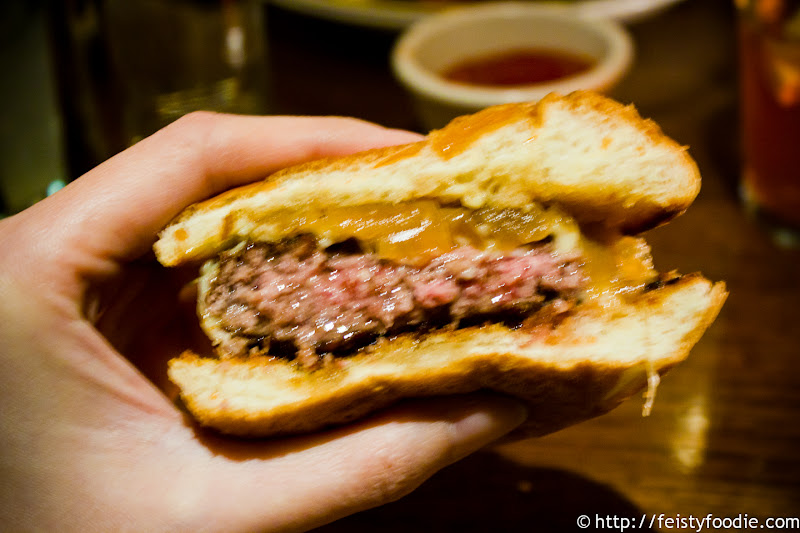 The next day I actually found a video of the chef/owner making the burger on Food Curated. I was impressed with all of the work that went into making the burger, but the burger in the video WAS NOT the burger served to me. I believe Hungry felt the same way as me after this second try.

Since TC was the first one to arrive, he was talking to the waitress about their famous mashed potatoes doughnuts. He learned that they only have a small batch in the morning and serve them until they run out, which is usually way before dinner service. Since they didn’t have any doughnuts left for us, they did treat us to some salted caramel doughnut holes. The salted caramel wasn’t salty in the least so both Yvo and I were disappointed. However, it was nice to have a warm, sweet bite to end the meal.

Yvo says: Um, actually, DLS and I were first to arrive, and TC was last before TT… I know, shocking, right?! (Which is why I have to ‘brag’ that I was first!) Anyway, having had Brindle Room’s donuts in the past, they’re good but I wouldn’t say absolutely-go-out-of-your-way-to-get-here-early-to-get-them.  These were definitely an appreciated bite though something was off about them.  The caramel tasted… burnt? 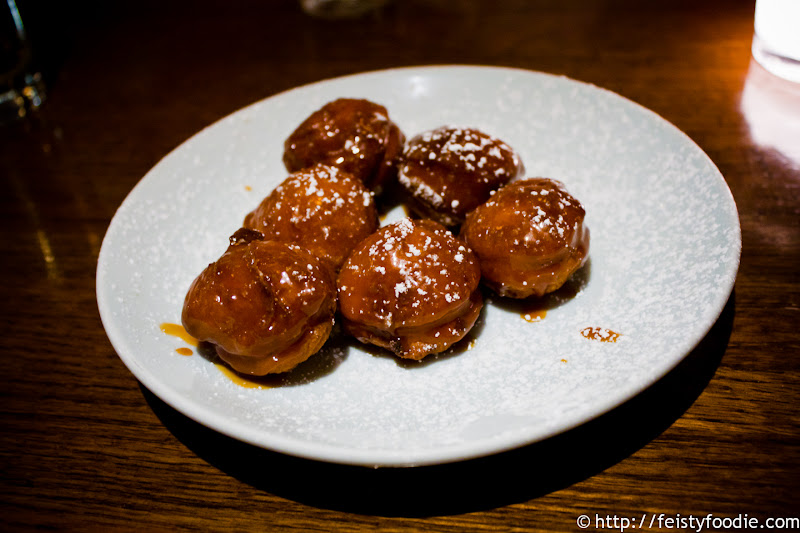 Since I didn’t get an appetizer and felt like having something else, I surprised everyone and suggested we get some “real” dessert at The Big Gay Ice Cream Shop which was just a few blocks away. I was happy to return to try a new flavor and also show those in the group who had never been there before.

I decided to try the cone that made them famous, The Salty Pimp ($5). It was a cone with vanilla ice cream, dulce de leche, sea salt and a chocolate dip. Hungry remarked that she had this previously and it was incredibly messy, but I didn’t believe her. I should have! As soon as I got through the chocolate shell, the ice cream began dripping everywhere. My left hand became a casualty of stickiness. Regardless, the flavor was excellent with plenty of salt to balance out the sweetness of the caramel and ice cream. 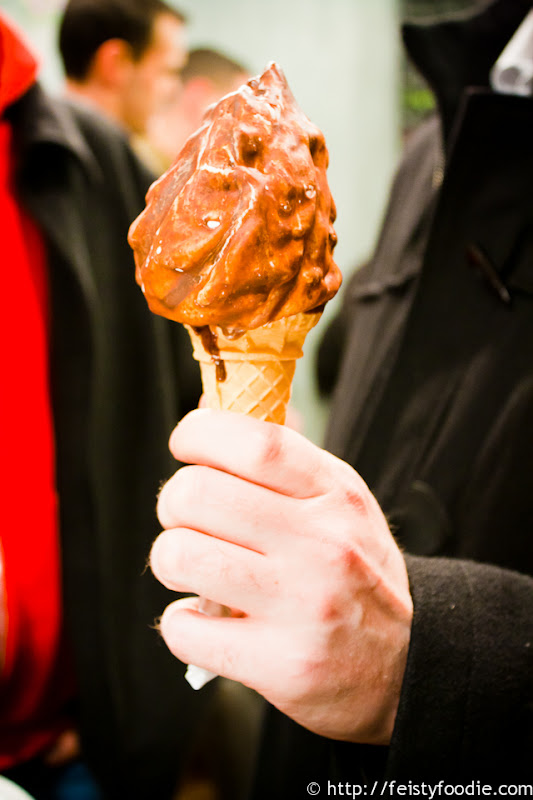 I convinced Hungry to try the Mermaid ($6) since I enjoyed it last time. I believe she liked it, especially the key lime curd, but it was too big for her, so she had TC finish it, who never leaves anything to waste. 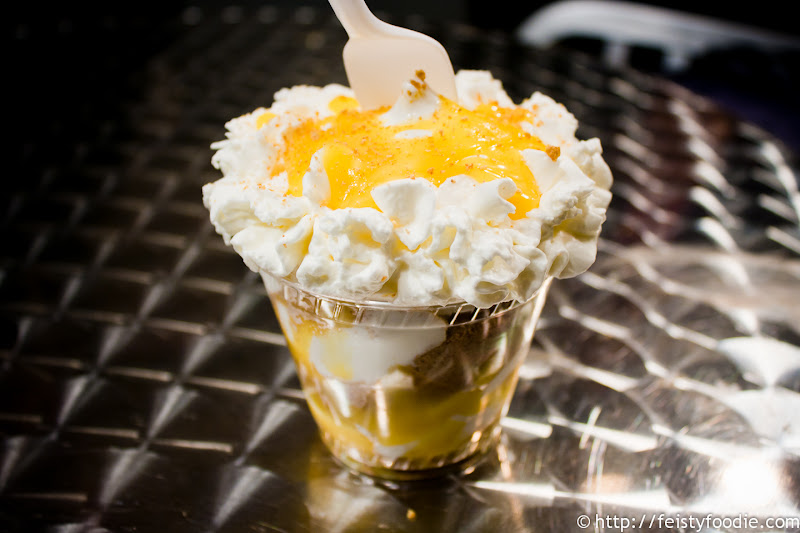 Mr. M&P, the most experimental of the bunch went with a plain chocolate ice cream cone ($3.50). 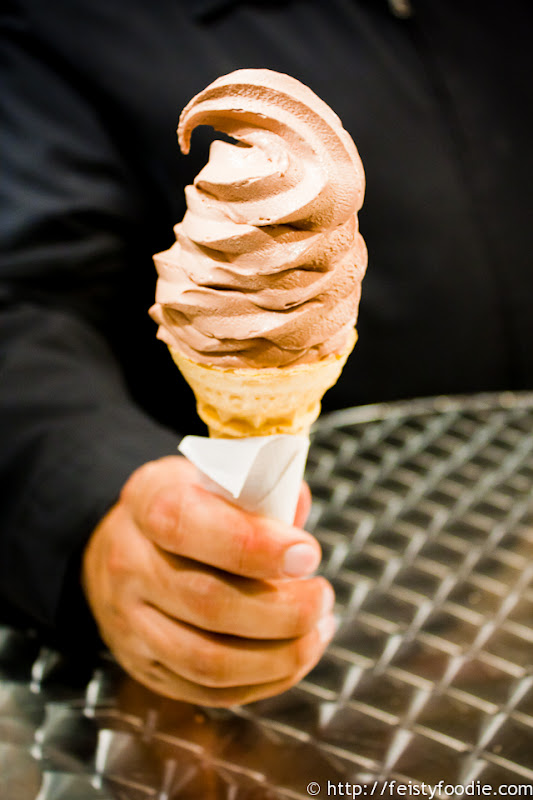 TC also had his own cone, American Globs ($5.50). It had vanilla, pretzels, sea salt and a chocolate dip. I was debating on ordering this and will get it next time. He wisely got a small dish when it was served to catch the drippings. I got one after the deluge began with my cone. I think he liked it a lot. 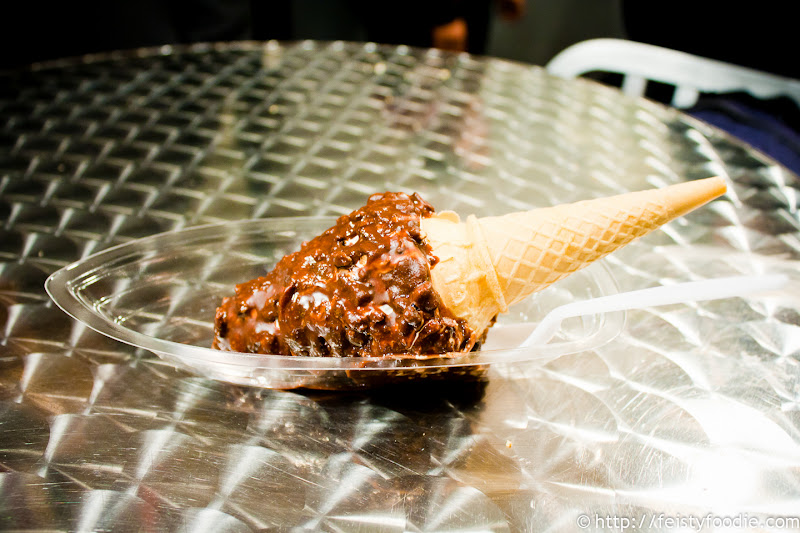 Yvo says: I didn’t get any ice cream because I was super duper full. But my final thoughts on Brindle Room – and it really pains me to say this, after being so generous with my praise initially – the quality either went down or Mondays are not the day the regular guy is in the kitchen. Something. I was incredibly disappointed that the place I’d so effusively praised was not as good as I’d described. When things like this happen, it makes me want to reserve praise even more! I don’t know what to really say other than, ‘wah’. Maybe I’ll head back over there in a month or two and give it one more shot… I also really hate consistency problems. If a place has a fantastic burger one day but other days not, I won’t comfortably say it’s fantastic. Sigh… still seeking my favorite burger (aside from Shake Shack), I guess.

All in all, the Brindle Room burger was still good, but not amazing in the “You must go there and get it now” kind of way. It was fun to go out with friends and have some good food and conversation, but that can be done anywhere. I am glad I tried the burger, but don’t see myself eating it again. The Big Gay Ice Cream Shop was a nice treat to end the night. Be careful with the cones though, they get super messy!