Over the summer, Google got into the daily deal game with Google Offers. One such offer was $5 for $10 at Pommes Frites. I had never been before but heard good things about the french fry palace. Wouldn’t you know it, I held on to this deal for a long time like I did with Bon Chon. CT & I were going to a party in the East Village so we decided to stop for some frites beforehand (and before the deal expired.)

Since we had to spend at least $10, we had to get the “double” size order for $7.75 and then three dipping sauces for $2.50. This put us at $10.25, perfect! While there is a lot of debate about whether these deals are actually a positive or negative for restaurants that participate in them, the people who redeem the deals inevitably go over and spend more on top of what they originally paid for the deal. I did that at Bon Chon, but stayed on target here.

Good thing there is usually a line to order because they have a plethora of sauces to choose from. 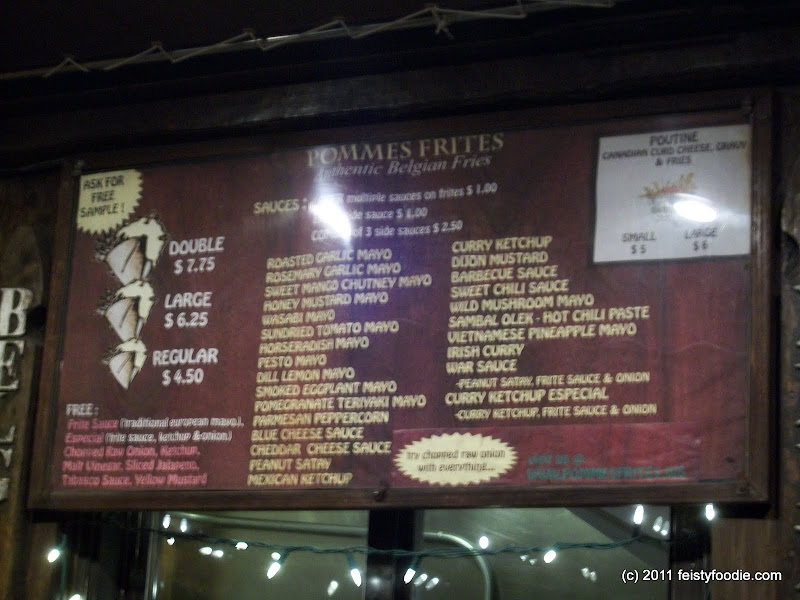 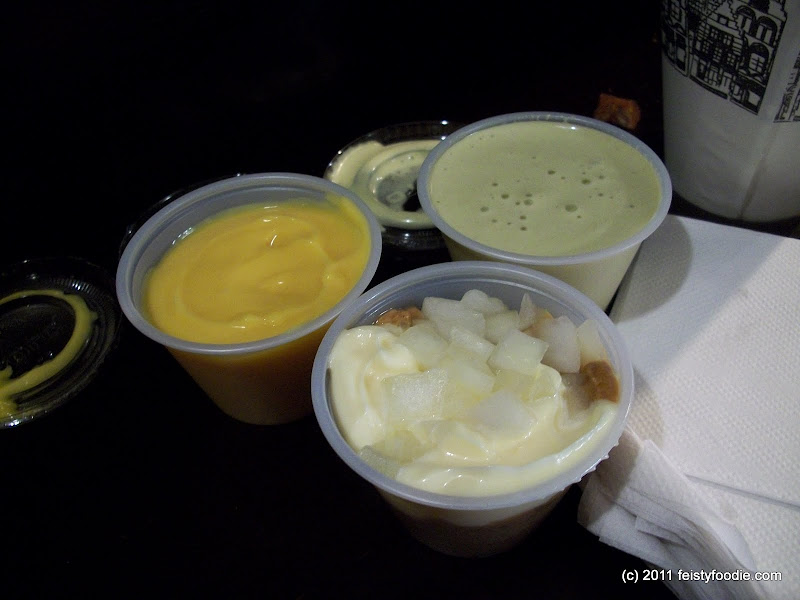 It is kind of hard to tell from the picture but it was a LOT of fries. We got a good batch (CT said she has had some not so good batches previously). They were super crunchy on the outside and soft on the inside. They could definitely be in the Top 3 French Fries in NYC. 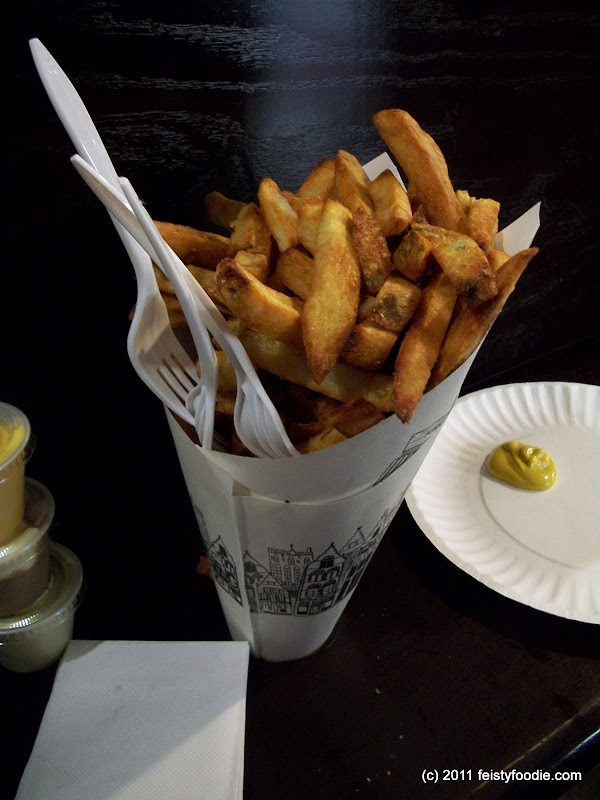 I would say the Wasabi Mayo was my favorite of the three for the sinus clearing aspect. I’m not sure what the War Sauce was trying to accomplish, it just tasted peanuty to me.

Pommes Frites is pretty much a takeout place although they had 2 small tables in the back and a couple stools along the wall. I was impressed with the holes in the tables that held the cone of frites perfectly. Next time I would order the small because no matter what I would eat the whole thing, so better to limit myself.

We knew that sharing some frites, does not a dinner make, so we headed to St. Marks Place to grab a bite somewhere else. What compliments frites? Sliders, do. Mark is a bar/restaurant that specializes in sliders. Our friend, KR joined us for some tiny burgers. She was supposed to share some of the frites with us but got held up and I accidentally ate most of her portion. Oops! 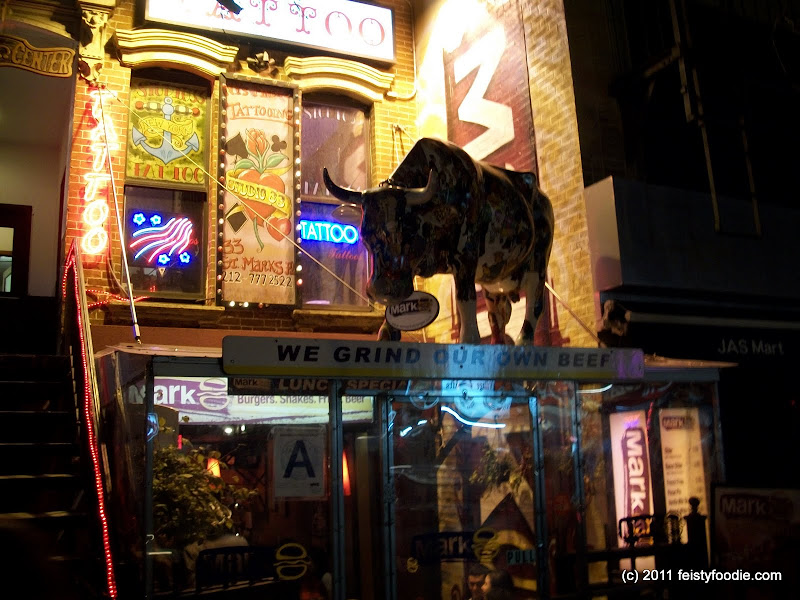 The menu was quite simple with just a choice of regular slider ($2.50) or bacon ($2.95) with a couple variaties of fries and shakes. Since we already had way too many frites, we stuck to the sliders.
Neither of us were particularly hungry, but felt bad if we only ordered one each. So, CT ordered two, while I stupidly felt the need to order three.

While waiting for our sliders, I was intrigued by the varieties of sauces on the table. There was barbecue, jalapeno, chipotle, and ketchup. 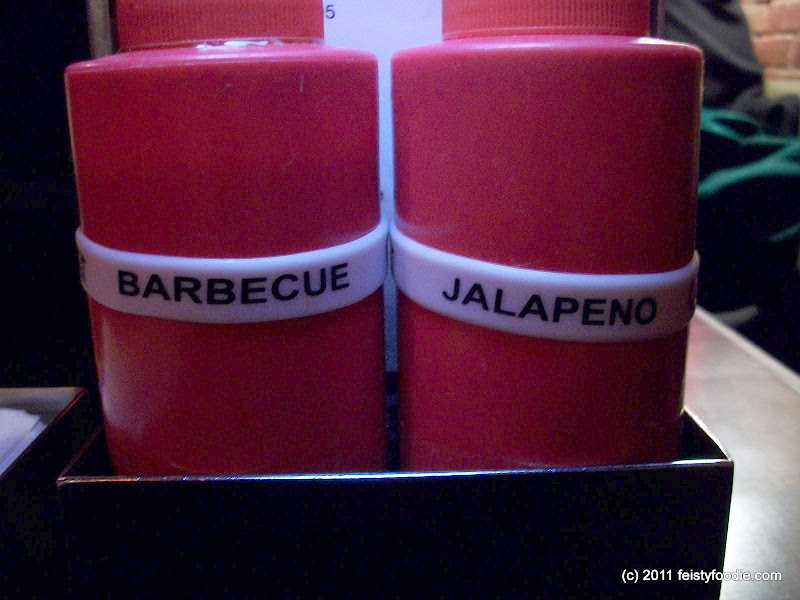 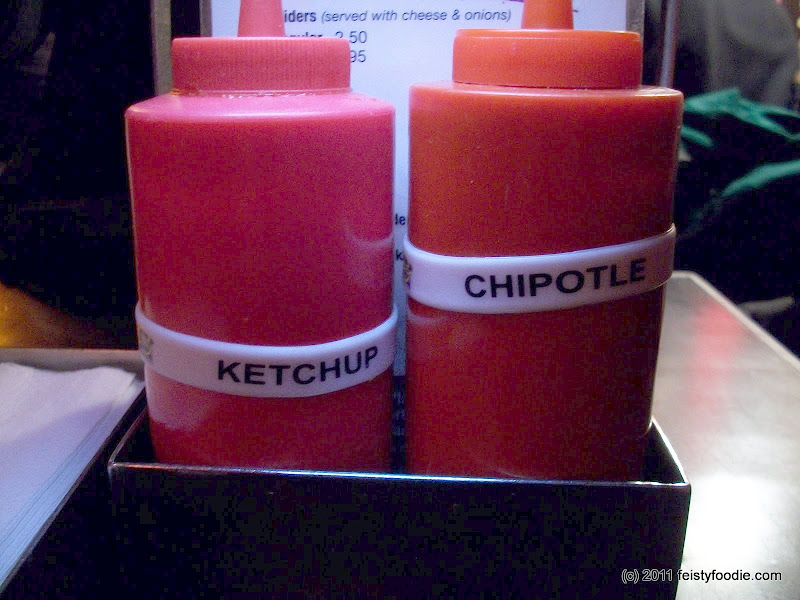 All sliders are cooked with onions, but I believe you can ask to for them without. Here are my three in their unique, little tray. 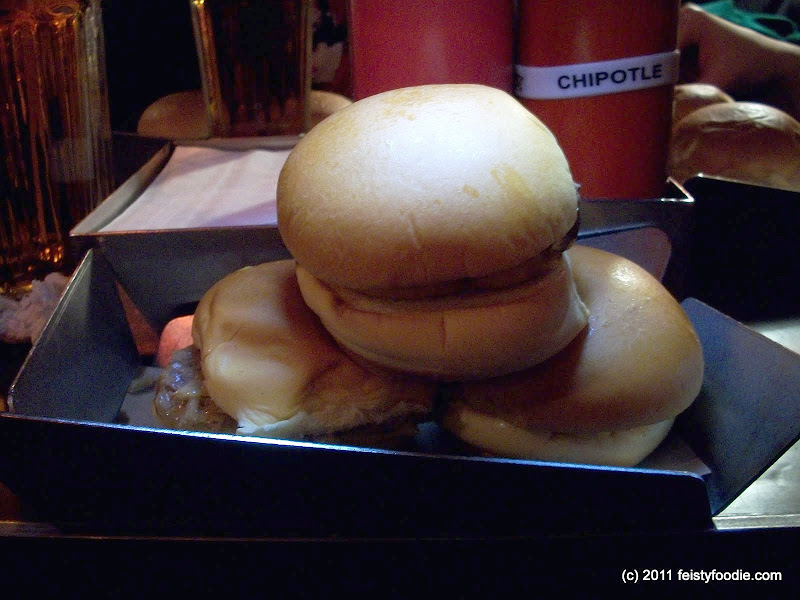 The sliders had a little bit of char for some nice flavor. I liked the jalapeno sauce the most to bring a little heat to the burger. The sliders were good, although I didn’t really appreciate them as much as I would have if I had been hungrier to begin with. 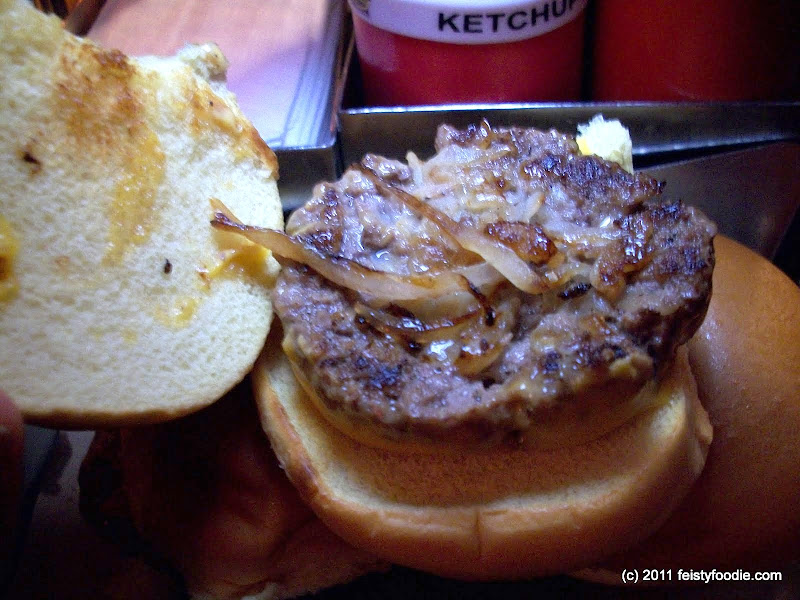 All in all, Pommes Frites makes some very good fries and Mark makes good sliders. However, I wouldn’t recommend going to both on the same night. Be wary of those deal website, 5 or 6 months may sound like a long time to redeem a deal, but time flies!