A couple weeks back, CT & I were once again graciously invited by my parents to dinner at the James Beard House. We have been quite spoiled as they have brought us to a number of events at the house over the past couple of years.

This time the event was called “Farmer’s Bounty Holiday Dinner” and featured chefs from Vie and Perennial Virant in Chicago. As an added bonus, it was also a beer dinner featuring various vintages of Goose Island beer (also from Chicago). Just to make sure that we were well lubricated there would also be a wine pairing with each course and beer. Overindulgent a bit??

During the cocktail hour, there was a choice of beverages(not pictured) including Goose Island Sofie and a special cocktail called the Kentucky Burnt Apple. It featured Kentucky bourbon mixed with some of the Sofie, Smoked Homemade Honeycrisp Apple Butter, and Lemon. It was quite the Fall cocktail. I have had the Sofie before and enjoyed it very much. A refreshing farmhouse style ale.

There were four different hors d’oeuvres passed around. Apologies for the quality of the pictures. It is never easy during the cocktail hour.

Pickled green bean “casserole” croquette. It was basically a fried pork nugget on top of sliced green beans. It was good, but amazingly enough the green beans overpowered the pork. 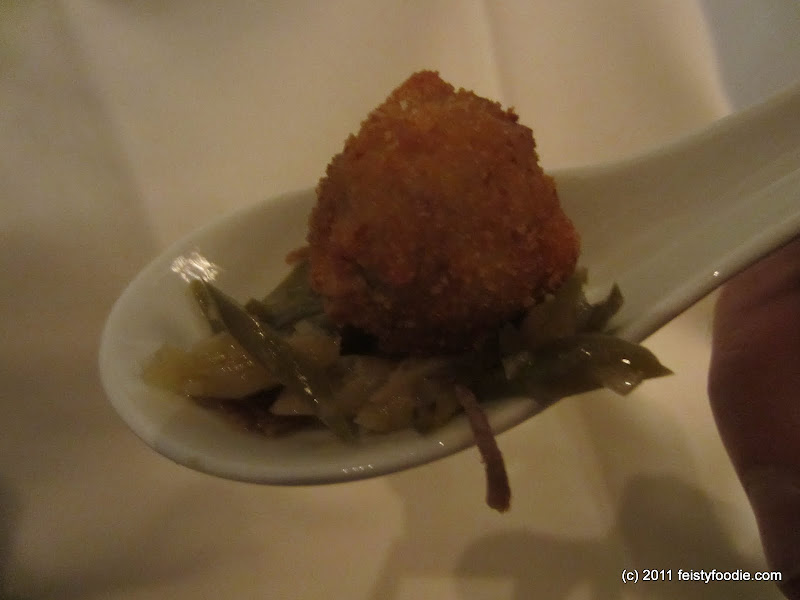 Fluke tartar with house olives, radish and pickled Illinois chanterelles. I am always a sucker for tartar and this one did not disappoint. For CT’s sake, the house olives didn’t have too strong of a olive flavor so she ate this too. 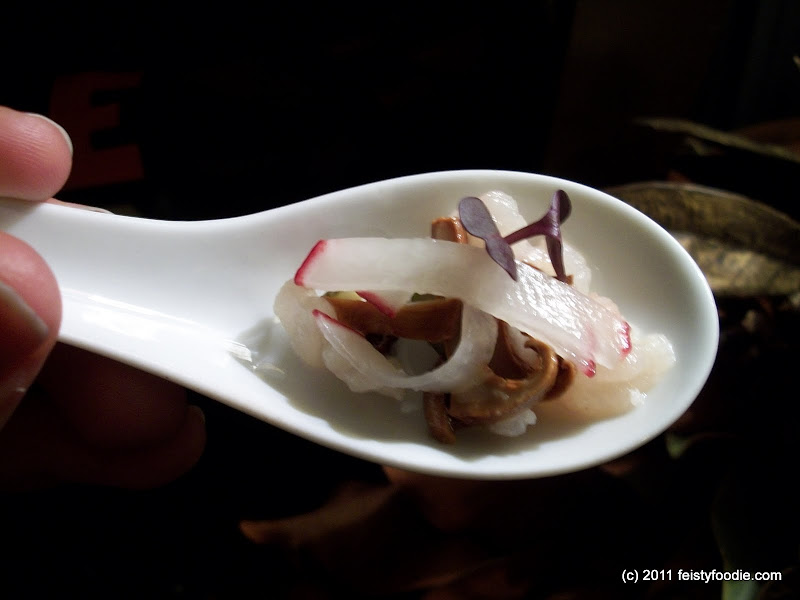 Smoked Gunthorp Farm Duck with preserved peaches and parsnip. The server informed us that the duck was cooked in the confit style. It was perfectly cooked and quite juicy. Unfortunately, that juice soaked in to the bread base so it made for quite a difficult bite. 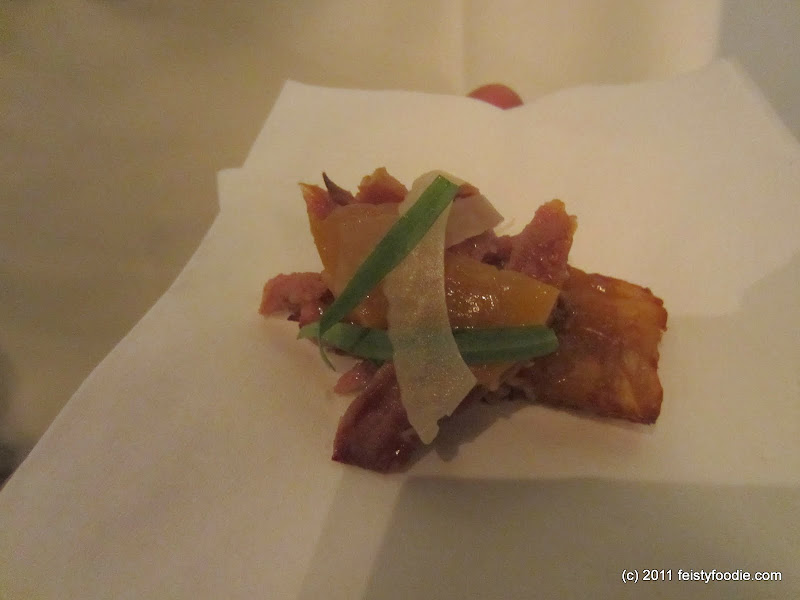 Smoked Sturgeon with mandarins, mint, pink peppercorn and toasted pecans. This was quite a large bite of fish. It was not very salty fortunately and a nice modern take on that old Jewish deli staple. 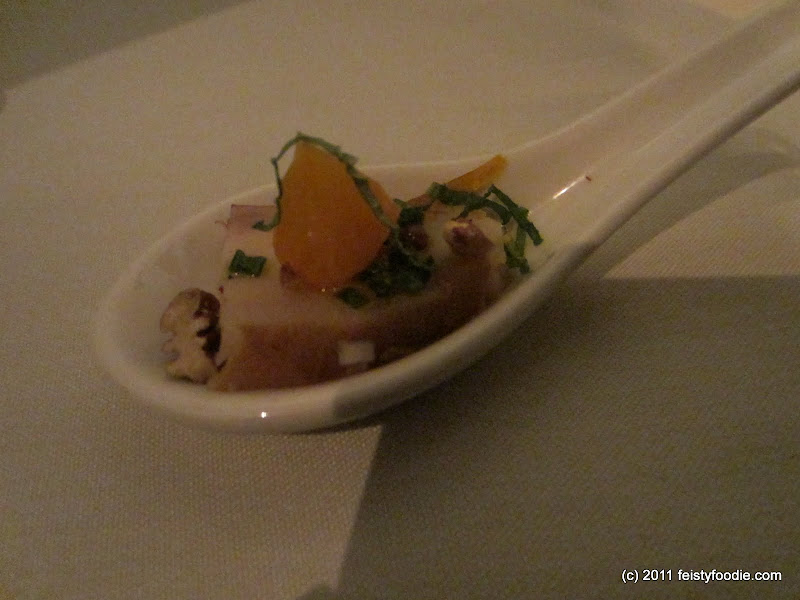 Overall, I wasn’t terribly impressed by the hors d’oeuvres. I also only limited myself to one of each because I knew that dinner would require as much room as possible (and maybe even the loosening of the belt.)

Nolan’s Salami with Marinated Ricotta, Salt-Cured Olives, Vie Apiary Honey, and Frisée. Later on, the Chef informed us that one of his sous chefs makes most of their charcuterie in-house including this excellent salami. It was quite an excellent plate mixing the saltiness of the meat and olives with the creaminess of the cheese and sweetness of the honey. I am pretty sure we all cleaned our plates. 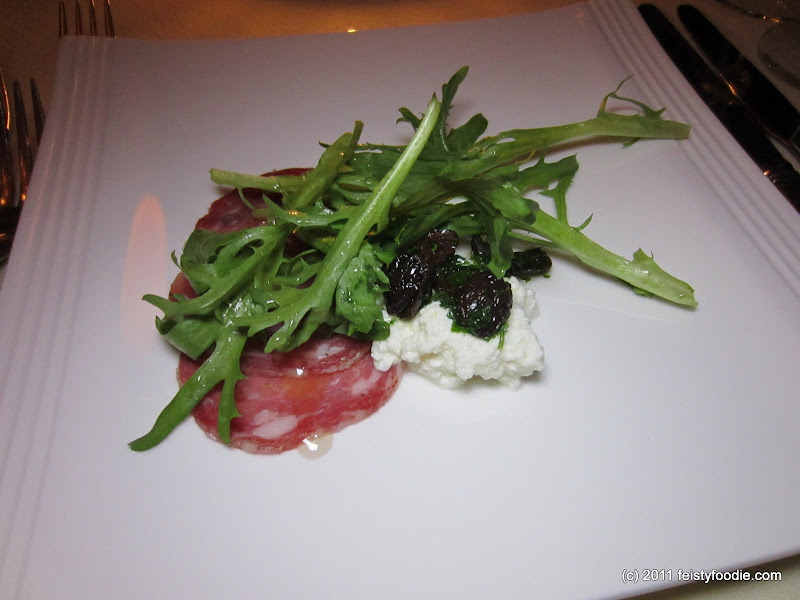 This was paired with the Goose Island Matilda Belgian-Style Pale Ale and a light white wine- Pazo de Galegos Albariño 2010. The crispness of the beer was an excellent foil to the plate.

Roasted Celery Root and Golden Beets with Fermented Plum Jam, Rye Melba Toast, and Triple S Farms Mangalitsa Lardo Toast. No, that isn’t cheese on that toast. It’s lardo and it was AMAZING! I try to limit my intake of rendered pork fat, but made a special exception for this. The veggies underneath were cooked perfectly, so they retained a bit of crunch. 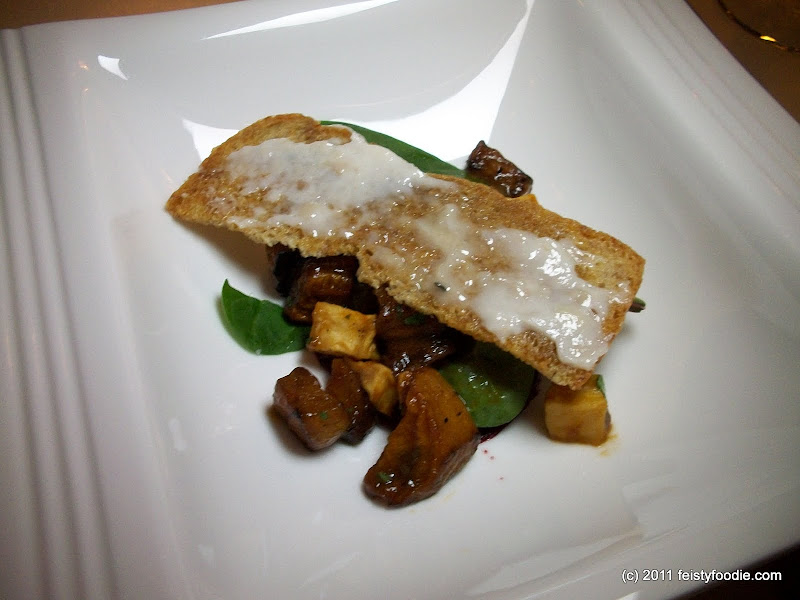 This was paired with Goose Island “Jimmy’s Red Farmhouse” Red Rye Saison and another white wine- Jean Reverdy Sancerre La Reine Blanche 2009. This beer was actually made for this event special and the Chef even helped brew it. I am a big fan of red ale and this was quite tasty. It did a great job of cleansing my palate of the richness of the lardo.

Yukon Gold Potato Gnocchi with Slow-Cooked Mint Creek Farm Goat. I was really looking forward to the lamb, but the gnocchi not so much. I find that gnocchi is one of the most difficult “pastas/dumplings” to get right so more often than not it isn’t that good. It wasn’t the worst gnocchi I have ever had but it wasn’t that good either, too gummy. On the other hand, the goat was excellent. Super succulent and seasoned perfectly. I could have eaten it all night. 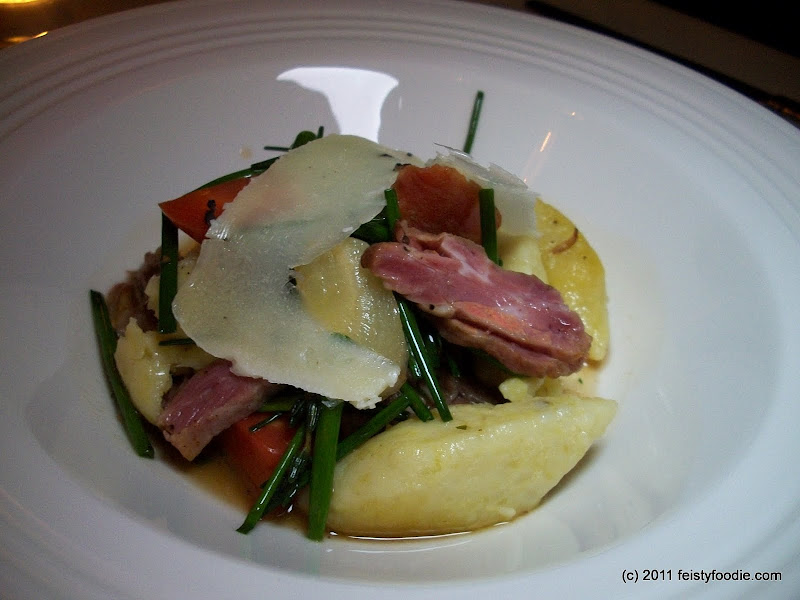 This was paired with Goose Island Alba Madonna and I believe a light red wine- Descendientes de J. Palacios Pétalos 2008. This was another beer made special for the event. It was made with three ounces of shaved white truffles. I consider myself to be an adventurous eater (and drinker) so I gave it a shot. It was not good and I did not expect it to be. Yes, I don’t like mushrooms/truffles that much to begin with, but I think pretty much everyone else agreed with me. It had that funghi aroma and taste that I would not consider that appealing.

I should have put in another three hours at the gym…

Dragon’s Milk Ale Jam–Glazed Dietzler Farms Beef Cheek and Rib-Eye with Hillside Orchard Chestnut Purée, Baby Turnips, and River Valley Mushroom Conserva. Two kinds of beef? Yikes! The beef cheek in the back of the plate was like the best short rib you have ever had. Super tender with just the right amount of sweetness from the jam. The rib eye was also nicely cooked, but a little less noteworthy. I do remember the turnips being quite al dente, so to save room, I skipped eating those. The chesnut purée underneath everything got lost on the plate. 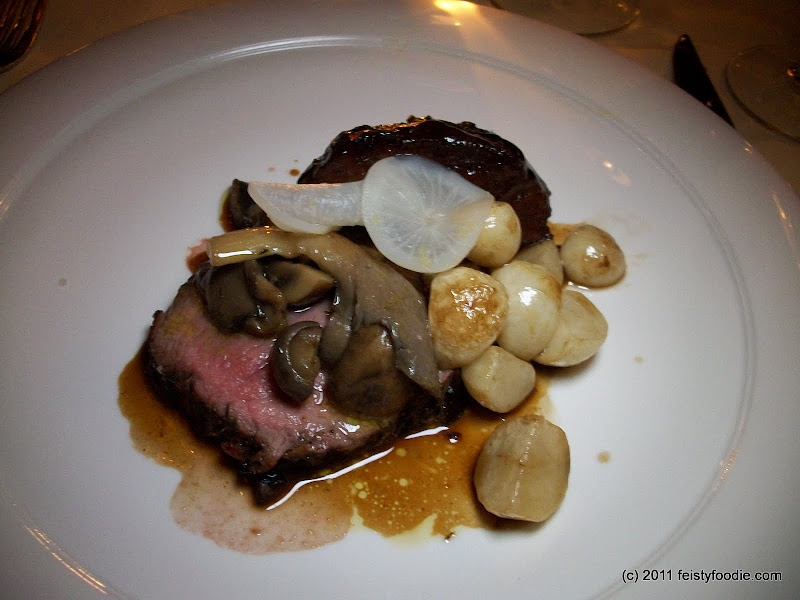 This was paired with the Goose Island Bourbon County Stout and another red wine- Milbrandt Vineyards Sentinel 2008. The beer was super chocolatey and was the perfect pairing with the beef. I am not usually a fan of these kinds of stouts because I would usually drink it alone, but with the food it was excellent.

Prairie Fruits Farm Little Bloom on the Prairie Goat Cheese with M&M Ranch Kumquat Marmalade and Pumpkin Brioche. Of course there was a cheese course. We probably would have gone home hungry without it. 😉 I have been a big fan of goat cheese over the past couple of years and this was another excellent version. The brioche had a very nice pumpkin aftertaste but fortunately did not taste like the namesake pie. The marmalade was a nice link between the two. 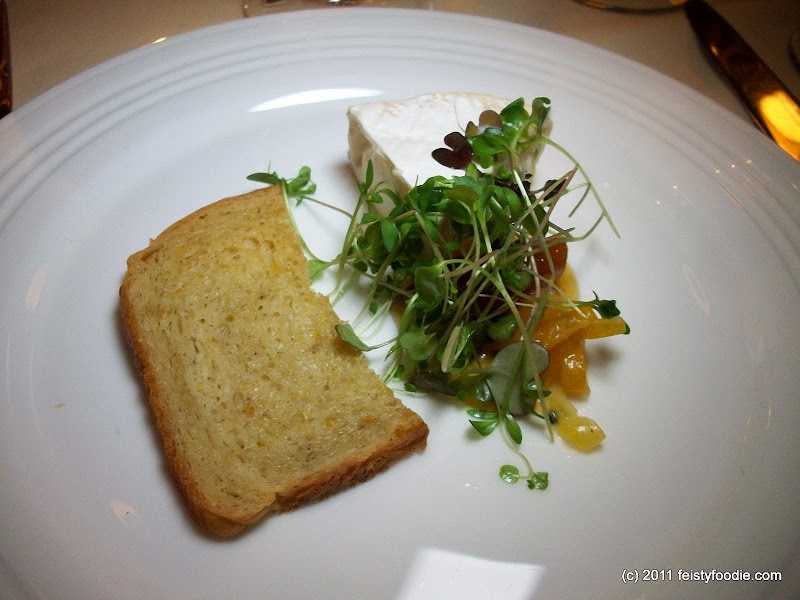 This was paired with the Goose Island Fleur Belgian-Style Pale Ale and a white wine- Weingut Rosenhof Welschriesling Beerenaulese 2006. The beer was a bit fruity which paired well with the cheese and marmalade. Fortunately, the riesling wasn’t too sweet so it was nice and refreshing.

Sticky Seedling Cherry–Toffee Pudding with Brandied Cherries and Crème Fraîche. White flag raised. I only had a tiny bite of this. It was super rich so it seemed to be a big hit for those with a sweet tooth. 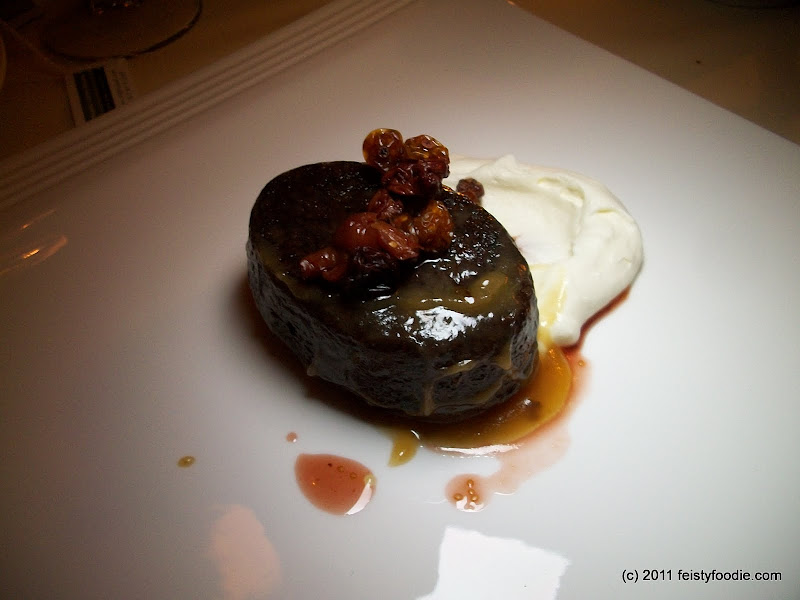 This was paired with Goose Island Madame Rose Belgian-Style Brown Ale and a Handcrafted Cocktail “The Lock and Key” by Vie bartender. This beer was a take on a Belgian sour beer. I never liked sour beers but found it worked well as a digestif. CT surprised me when she said that she really liked the beer considering her favorite style is the much milder wheat beer. It also helped that the beer was made with cherries. The cocktail seemed to be a dessert wine with a kick. Quite the opposite of the sour beer. 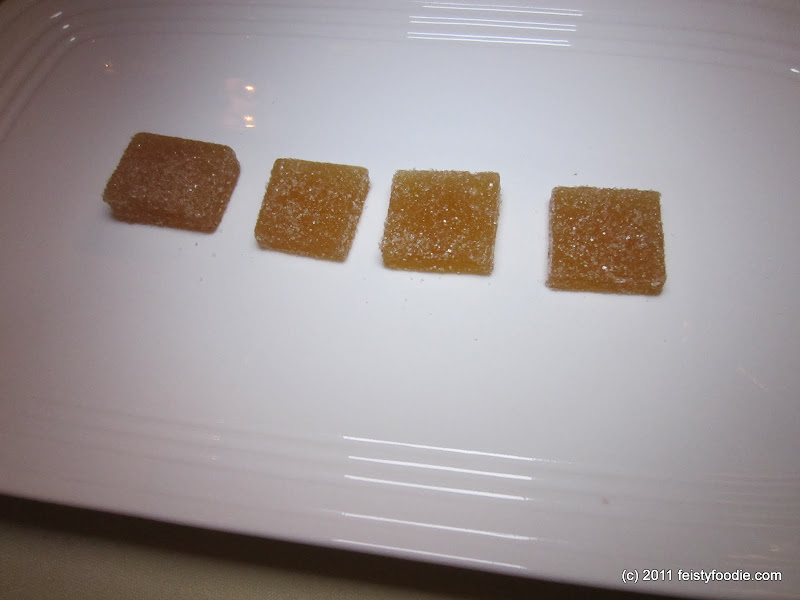 All in all, it was quite an excellent dinner. Yes, we probably could have gotten by without having the wine pairings, but hey, you only live once. I was quite impressed by how much of the food was made/grown in-house. Next time I find myself in Chicago, I will have to check out these restaurants. Thanks again for dinner Mom & Dad!