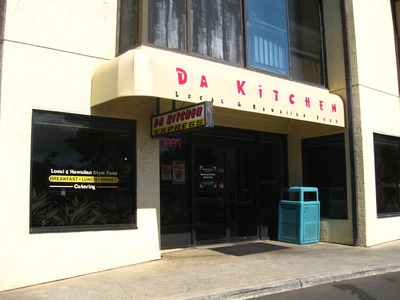 On my last day in Hawaii, most people had left already, back home to reality after a week in Paradise… but RC and MY were doing things the other way and spending the week after the wedding in Hawaii instead.  The day before, we’d talked about Kihei (where Alexander‘s is), so they called me to see if I wanted to walk with them up to Kihei to explore.  Yes, absolutely – the walk along the beach up to Kihei from our resort in Wailea is so relaxing, so beautiful… hard to turn that down.  While we were walking, I noticed Da Kitchen, which StB had mentioned to me earlier in the trip.  I was starving by this time, so I suggested going inside to check it out, and RC & MY were both game. 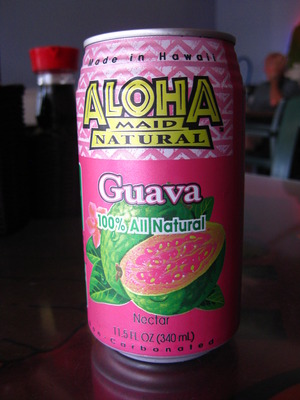 After ordering, I quickly grabbed a can of guava juice, yum.  Why don’t we have this in more places in NYC? 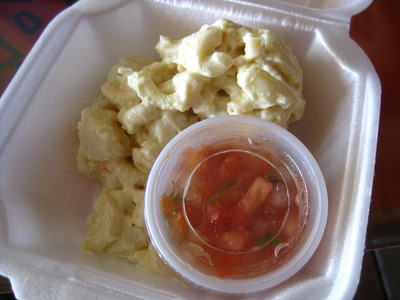 I’d ordered the Hawaiian plate, which came with potato mac salad.  I LOVE Hawaiian potato mac salad, it’s a carb bomb waiting to explode in your stomach.  I thought the side container was of pico de gallo or something… I will explain about that later. 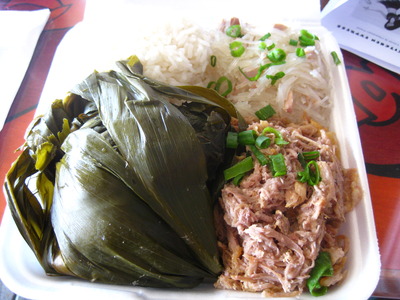 The plate was huge. 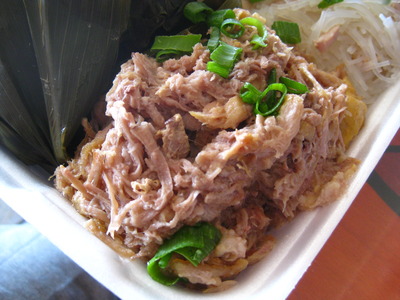 First up, Kalua pork, which I love – this one was particularly salty but went exceptionally well with the fluffy white rice in the container, yum. 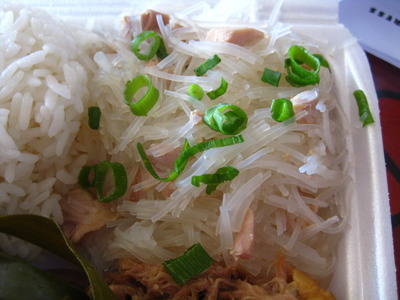 Chicken long rice, which was slightly less salty, had noodles of a sort in a very soupy mixture.  I’d never had this before but enjoyed it a lot.  RC, who got the same platter I did, also liked it. 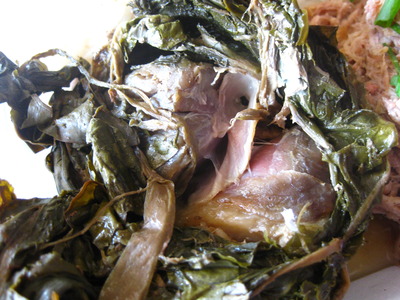 Pork lau lau, wrapped in taro leaves, this is with the leaves open to show what’s inside.  We had a lot of trouble telling what this was – because the menu had said we would get lomi salmon as well – and we spent time looking at it.  The texture was… interesting, and the flavor was not very recognizable.  Maybe this is something that you have to grow up with to like? I don’t know, it didn’t do it for us.  We were all very confused and I found the flavor kind of bland.

As for the lomi salmon – it was in the small cup in the smaller box with the potato mac salad!  Small cup of chopped tomatoes and onions with teeny bits of salt cured salmon.  It took a while for us to find the salmon in our small cups, but it was funny as we were just like eh?  Hahaha.

Our containers wound up being way too much food, so we all packed food to take with us on the rest of our walk.

Yvo says: I really enjoyed the more casual style of Da Kitchen and the food was all very good, albeit salty – I attribute that to most people eat their meats with the rice provided, while I tend to eat less carbs and so didn’t have too much rice to offset the saltiness of the food.  I was happy to learn that the Kalua pork I eat at L&L Hawaiian BBQ is pretty close to what they serve in Hawaii!  Though I think our platters were on the expensive side ($15.95), there was a ton of food, and I packed some to eat later on the plane, so that was a win in my book.  Definitely check out Da Kitchen for some real Hawaiian food!
recommended