Last month, we got together with CT’s family on a crisp Fall Sunday to celebrate CT’s Dad’s birthday. As long as he is around his family with good food and drink, he is a happy man. His only request this year was “something spicy.” CT’s sister, ML, had the perfect place in mind- Zabb Elee. The original location is in Queens, but last Spring they opened a second location in the East Village. I remembered reading Serious Eats’ review and wanting to check it out. I was even more intrigued when they said that Harold Dieterle of Kin Shop raved about the place. I am not too familiar with Thai food, but was happy to experience more. Zabb Elee specializes in “Isan style” food, which comes from the northeastern region of Thailand.

Since we were celebrating, we started with a drink. They offer a nice selection of wine and cocktails, but I decided to have beer. I had the Beer Lao Dark, which is from Laos. I never had it before, but it was quite good. It paired well with the spicy food. Sorry, but I didn’t take pictures of everyone’s drink. CT had a lychee martini, which she seemed to like especially because it wasn’t super sweet. 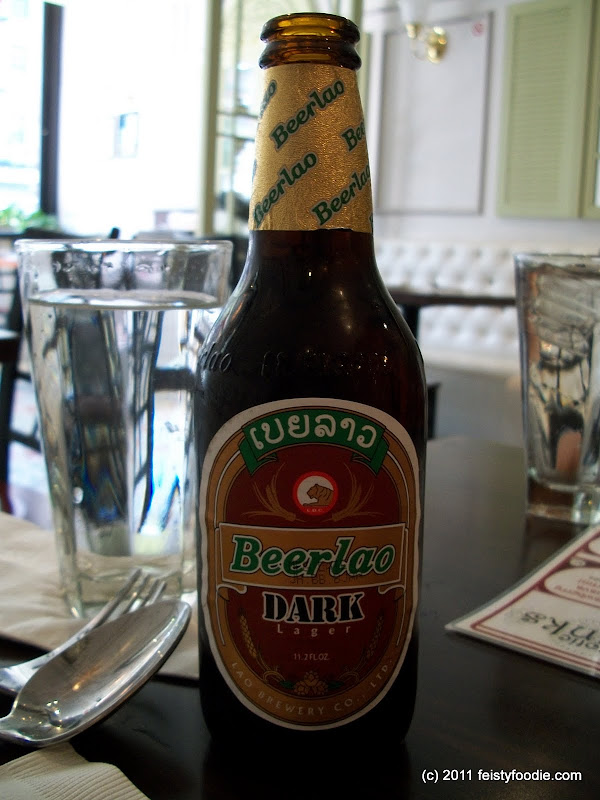 Of note, service was very good throughout the meal. Our waitress was also very helpful in making menu recommendations. Apparently some people on the world wide web have complained about poor service.

Over-ordering is the norm with CT’s family, so we started with a few appetizers.

Duck larb ($9). Larb is must order at this restaurant and our waitress emphasized that we should get it with duck. It had a fair amount of heat, which got our tastebuds going! It wasn’t a smack in the face heat that we had with the same dish at Kin Shop, so I came out unscathed. CT & I have started making larb at home because it is such a tasty and delicious dish. I even made a turkey larb for our last FBM potluck. 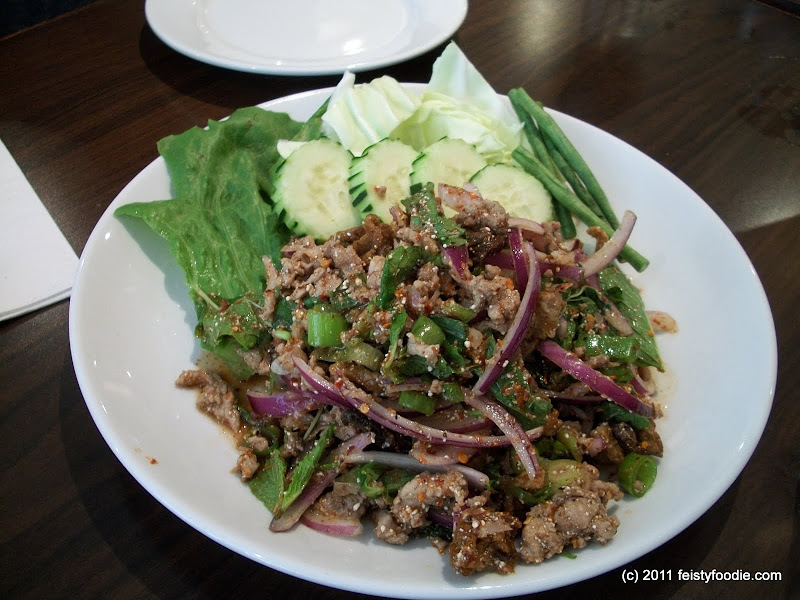 CT says: This was a great start to the meal, filled with lots of fresh ingredients. As TT mentioned, the spice wasn’t obvious at first taste, however it built up with each bite.

Nujer Kem Tod ($9). This was marinated, salted, fried beef with hot sauce. It was quite tasty like little bits of fresh beef jerky, but not that noteworthy overall. 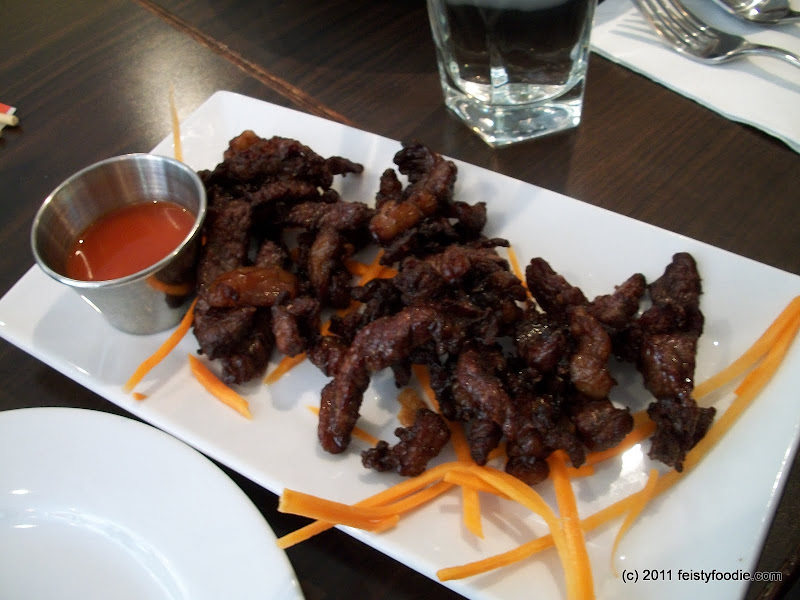 CT says: I quite enjoyed this dish as well; had a nice flavor and texture to it. I would order it again.

Som Tum Thai ($8)- Papaya salad with dried shrimp and peanuts. This was one of the best papaya salads I have ever had. Everything was very fresh and flavorful. The citrus juice made the whole thing pop. The bowl had a variety of textures although my favorite was the dried shrimp and the chicharrones garnish. CT’s Dad and I loved the broth so much that we were drinking it by the spoonful. Yes, the waitress gave us some odd looks when she tried to take away the dish. 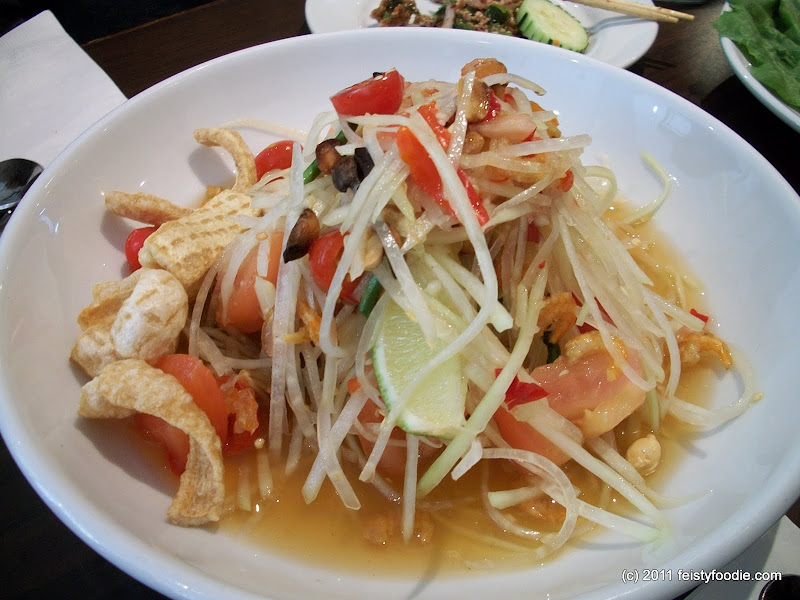 CT says: I always enjoy this type of salad and this was no exception. However, I found the shrimps just a little too dried out and hard. I thought they could have benefited from a little extra soaking in the delicious juices at the bottom. However, it was no dealbreaker and I continually scooped more onto my dish.

Pla Muk Yang ($9). CT found a squid dish on the menu so she ordered it on my behalf since I love squid. This was grilled squid with garlic pepper lime dip. It was quite a large portion of some thick skinned squid. Unfortunately due to the thickness, it became super chewy. The dipping sauce also had a bit of strange spiced flavor in it. Maybe anise? This was the least successful dish of the day. 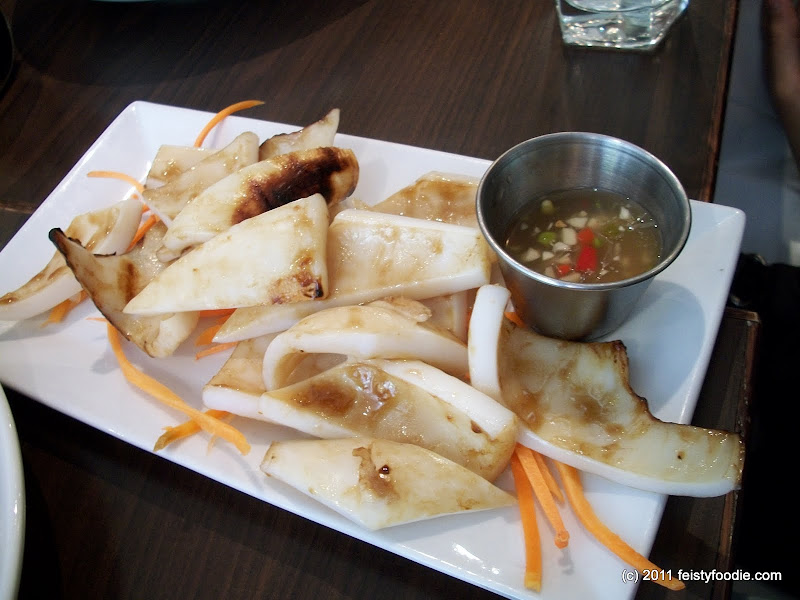 CT says: This was one of the recommended dishes as well, but unfortunately it fell a bit flat. My first piece was actually perfectly cooked and delicious, so I thought TT was being picky as a super-fan of squid. However, a couple more pieces in I realized, only the small ones were cooked well. Oh well.

Pad Ped Moo Korb ($8). ML had been here before and insisted we order this. Mostly for the unique Thai eggplant that it featured. It also had crispy pork, pepper, basil, wild ginger with spicy curry. This was a very interesting and unique dish. Although it looked very spicy, I don’t remember it being too mouth burning. The Thai eggplant looked like slices of lime although it was hard to get the flavor since the curry covered everything. 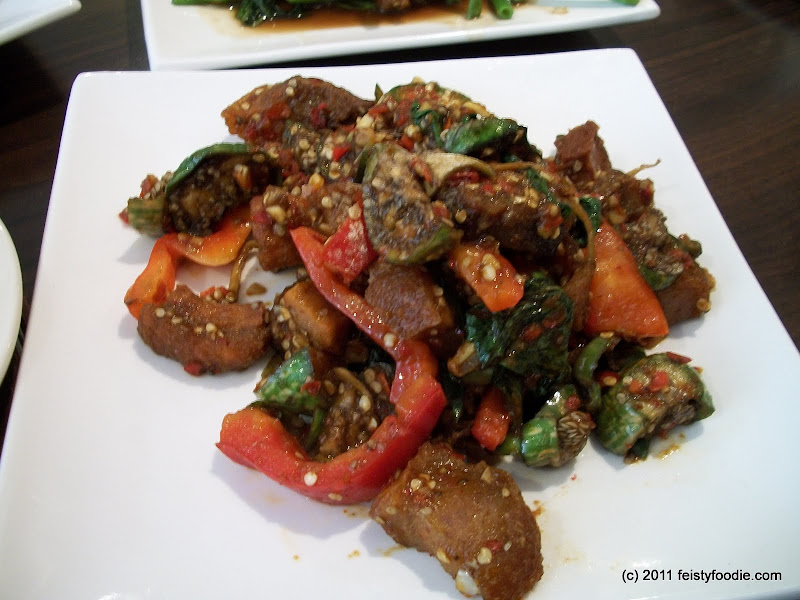 CT says: This was fantastic – so much flavor infused and the pork had a nice bite to it! However, this isn’t a dish to keeps leftovers of; after a while the pork got a little hard and chewy. Not really a problem, since it was so delicious you’re unlikely to have any leftover anyways!

Pukk Boong Moo Korb ($8). We got a veggie dish to be healthy, but yes it did have crispy pork in it. hehehe The vegetable was sauteed morning glory. I had never heard of morning glory before, let alone tasted it. Although it looked liked green onion, it had more of a spinach flavor. There were quite a few chunks of the pork throughout. Unfortunately, some pieces of the pork were left in the fryer longer than others making them pretty much inedible. 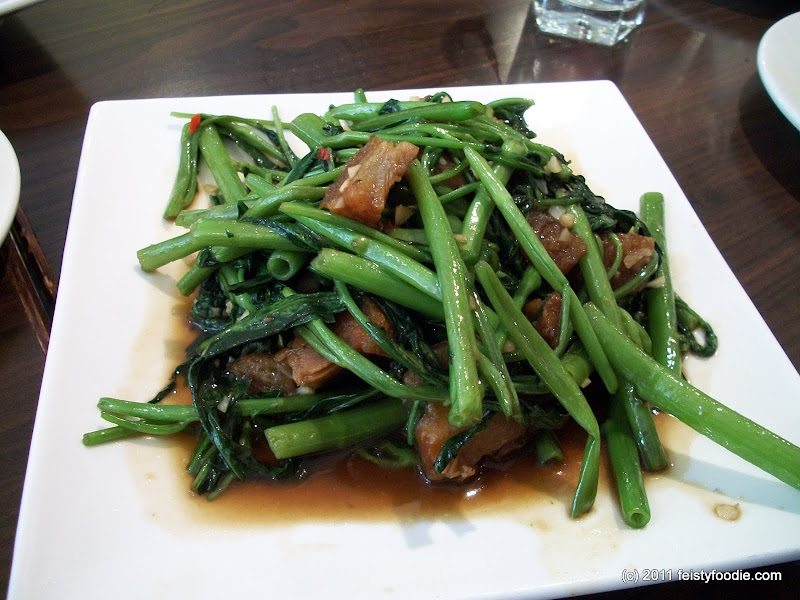 CT says: Though we probably didn’t need more meat for this dish, obviously we had to get it. However, the flavor of the morning glory carried itself and was a nice break from all the heavier dishes. 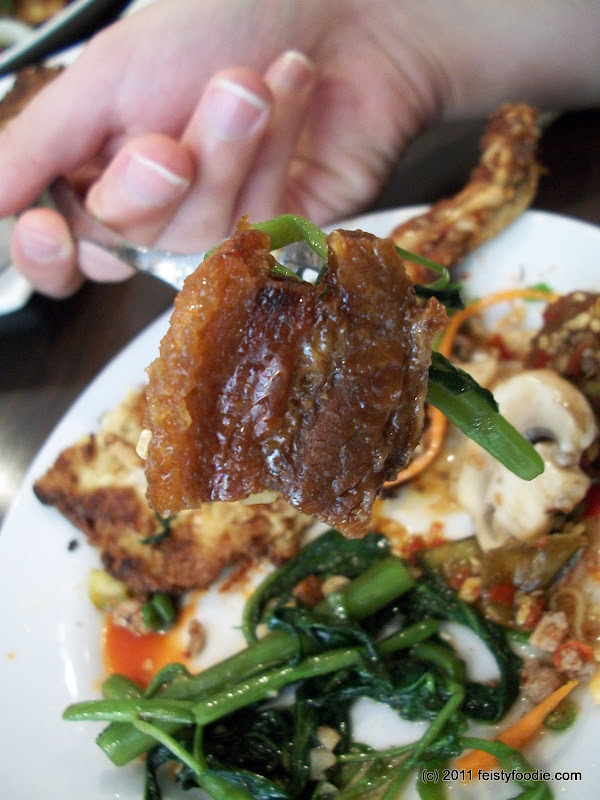 We also shared an order of sticky rice(left) and plain rice(right). 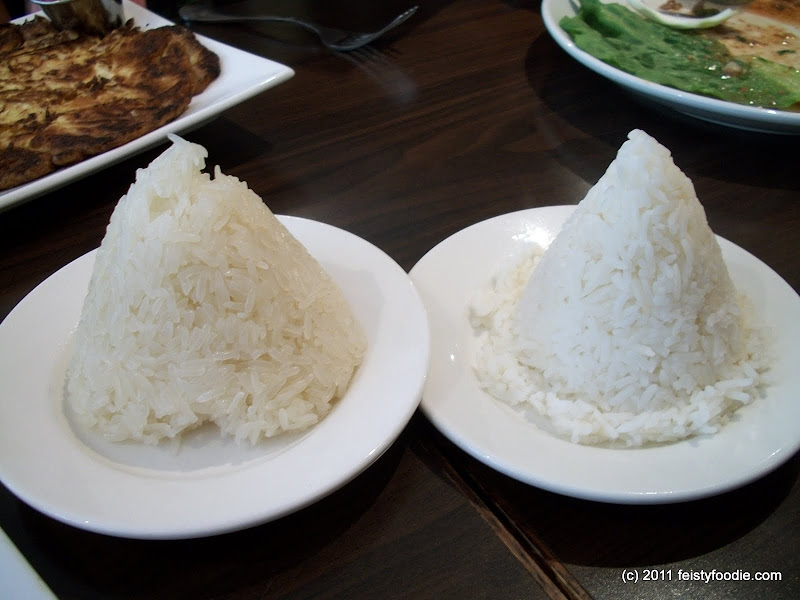 Kai Jiaw Kratiem Dong ($6). This was another dish ML ordered for us. It was an omelet with pickled garlic. As you can see, it was not your typical omelette as it was cooked very well done. It was almost like a Thai version of pajeon. I’ll still take the pajeon from Han Bat any day of the week over this one. I only had a small bite since there was so much food to try. 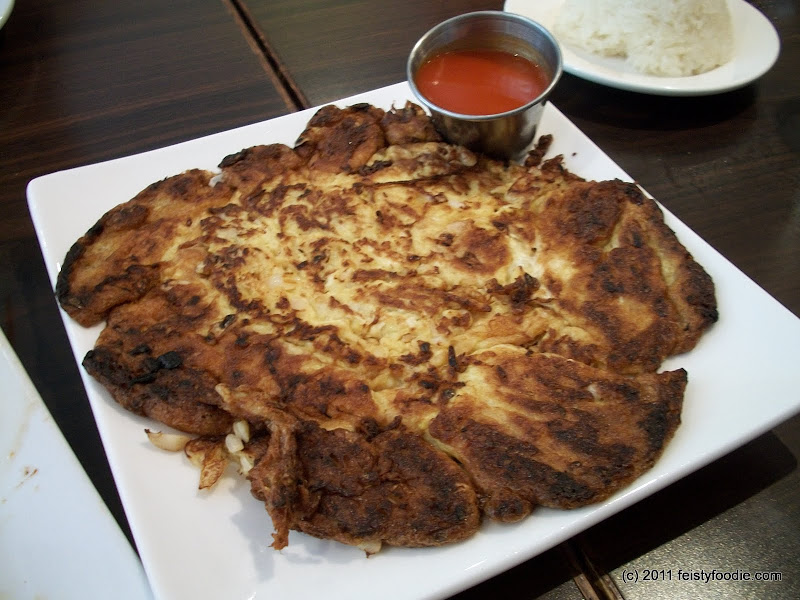 CT says: I noticed this on the menu and was intrigued, so I was glad ML tacked it on the order. I really liked it and thought it was a nice lighter option to accompany the rest of the meal. Plus I like the surprise filling with each bite!

They had a couple daily specials, which we decided to partake in.

Crispy frogs legs with garlic and mushrooms ($15). No, those aren’t chicken drumsticks, it is frog! I had never seen such plump frog legs before. This dish was amazing with the crispy juicy frog. I even ate some mushrooms, that’s how much I enjoyed this dish. It was also super reasonably priced for the six or seven HUGE legs we got. Yes, it did taste like chicken, but still had a little fishiness. 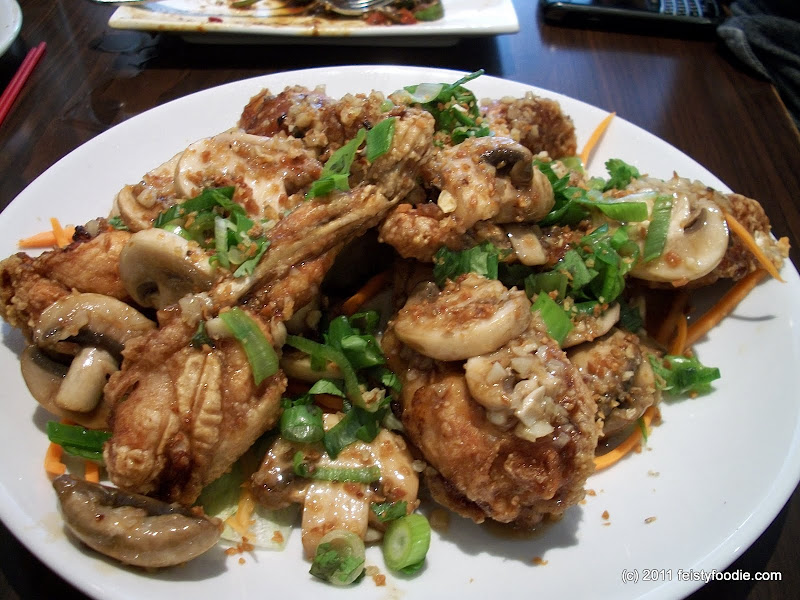 CT says: OMG. I think I’ve only had frogs legs maybe once, I’m always game for trying things. This was so freaking amazing. Like, stalk this restaurant until it’s on their specials menu again good. So juicy inside yet I could hear the crispy crunch with every bite. Such a mouth-watering sound and it was all mine! It definitely had a distinctive taste, but not at all off-putting. I wish I could’ve eaten more of this dish, but I was getting so full.

Crispy white fish with basil ($15). This was one of the most vibrantly colored dishes of the day. The fried fish was drowning in vegetables. The fillet was quite thin so the flavor of the fish itself was difficult to discern. It was a good dish, but I would probably pass on ordering it again. 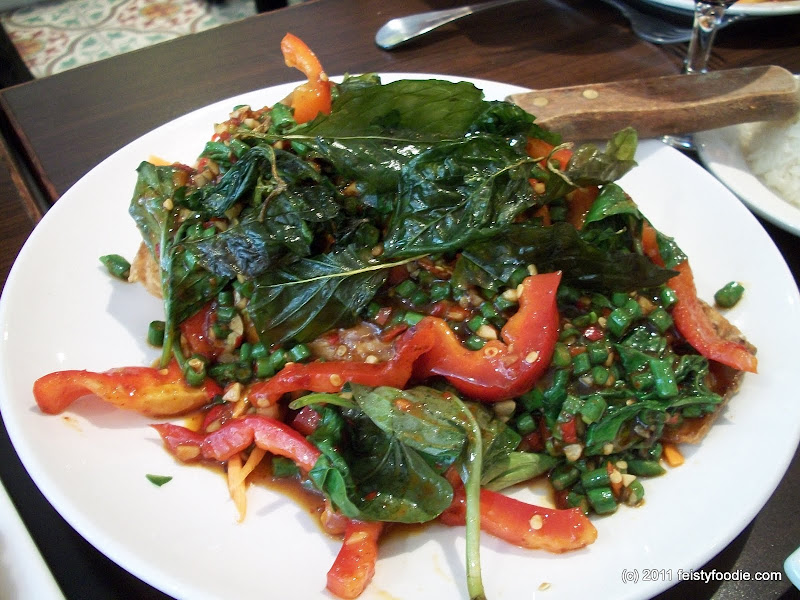 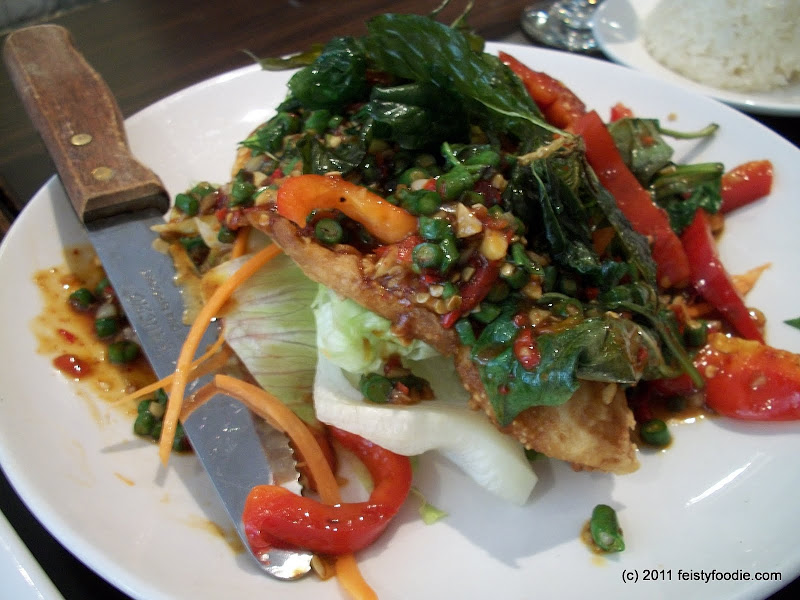 CT says: Another solid dish and the fish was cooked perfectly. However, I was too focused on the frogs legs at this point. It’s hard when there is so much good food on the table!

All in all, Zabb Elee was a great place for authentic Thai food. Everything was super fresh and vibrant(even for Sunday lunch). Some dishes were obviously better than others, but I will definitely return for some of my favorites and to try some new ones. The restaurant itself was nicely decorated and very clean. With the food we had, I wouldn’t have been surprised for the place to be a hole in the wall. Happy Birthday again to CT’s Dad!