The day after Hurricane Irene paid a visit to the tri-state area, most forms of inter-state transportation were still offline. As such, CT was unable to get to her office in Connecticut, so she worked from home. As for me, I braved the empty streets of Manhattan for my usual walk to to work. Since the majority of my colleagues commute into the city, the office was eerily quiet. What do quiet days at the office mean? Two words: LONG LUNCH! I made plans to meet CT for lunch nearby. Since Connecticut is lacking in Asian lunch options, we decided to take advantage of one of the lunch specials in K-town. Brownie from Midtown Lunch recently praised the Korean BBQ lunch special at Miss Korea BBQ, so we decided to check it out for ourselves.

Since the majority of Korean restaurants give a ton of banchan and we are trying to minimize our waistlines, we decided to forgo getting any appetizers. I’ll admit I was thinking about ordering the seafood pajeon, but came to my senses and realized it most likely won’t be as good as the version at Han Bat.

Within seconds a tray of nine different banchan were brought out. At Han Bat we are usually only given five or so. Quite an impressive amount of complimentary dishes. Although I eat a fair amount of Korean food, I am not able to tell you what each dish was. 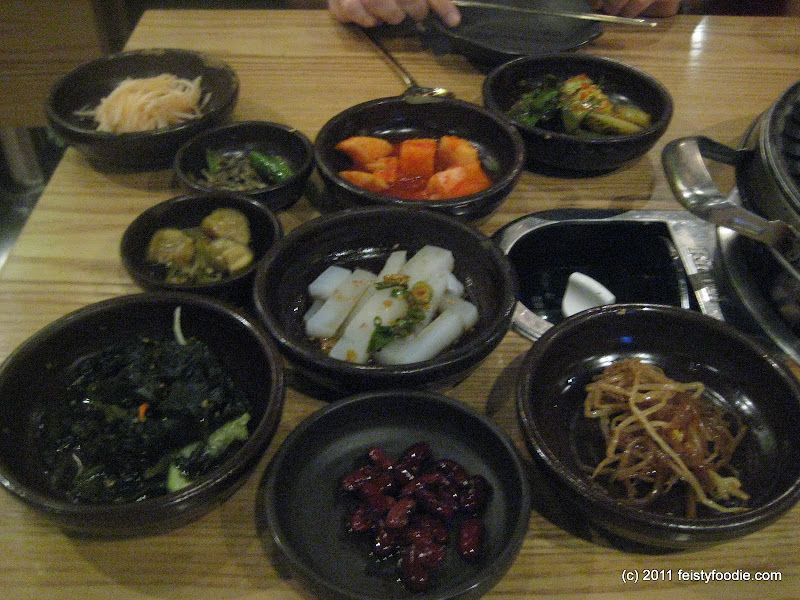 We ordered two different meats. The “Thin Sliced Pork Tenderloin Marinated in House Special Spicy Sauce” and Bulgogi. Each were priced at a reasonable $12.95. They have the service down pat and the meats were brought out quickly so the waitress could start the cooking.

The spicy pork was cooked first on the table top grill. It was cooked with some mushrooms and onions. 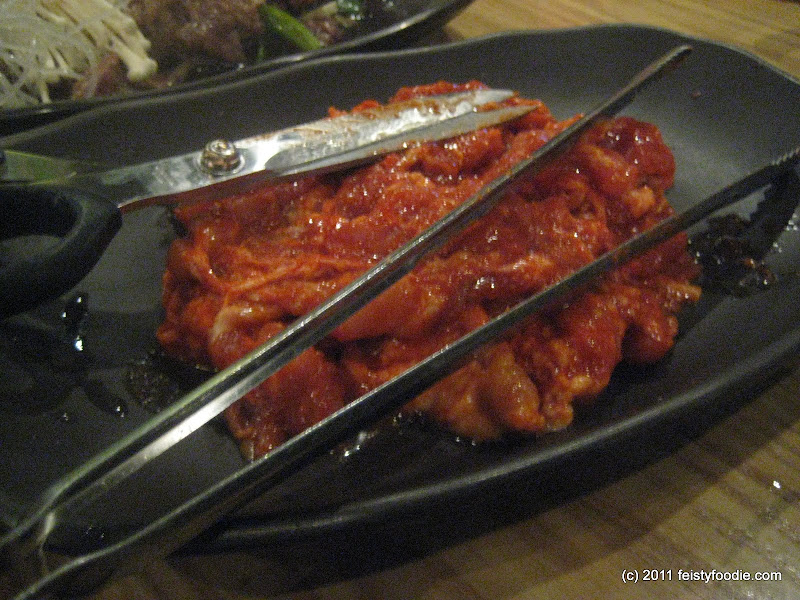 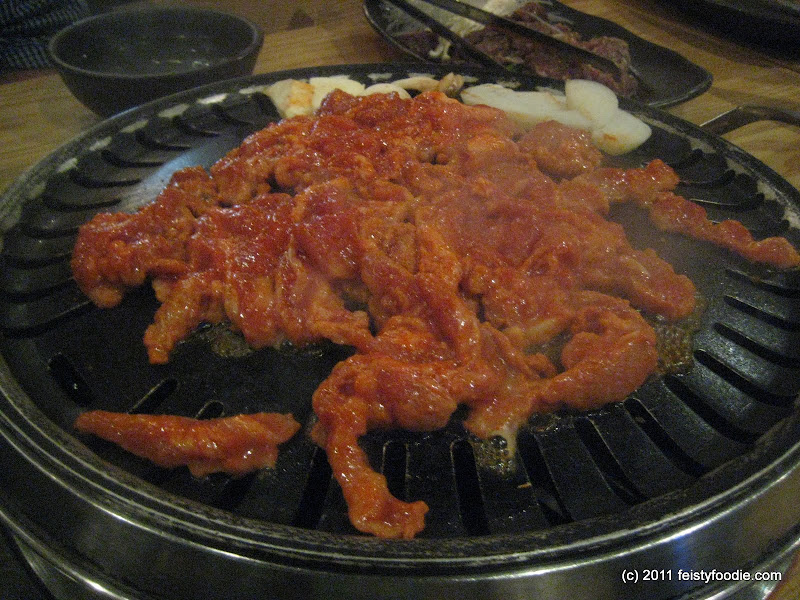 There were lettuce pieces available to make wraps. More lettuce was brought out if requested. The pork had some great flavor from the spicy marinade. Don’t worry though, the bright redness of the red pepper paste doesn’t mean that it was melt your face spicy. The lettuce cooled off a lot of the spice anyway.

CT says: This pork had a lot of flavor and the spicy sauce wrapped into the lettuce cups were just the perfect balance.

We were also given some seaweed soup. I only had a taste since there was so much better food on the table. 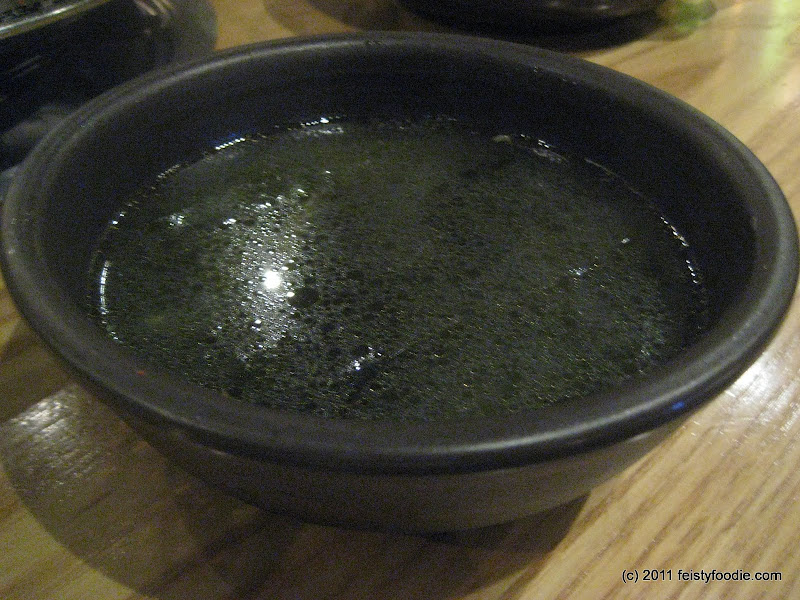 After we ate most of the pork, the waitress brought out a new grill for the bulgogi. It was lightly grilled then put into the surrounding broth with mushrooms and glass noodles. Since it was a lot more liquidy, we ate most of the beef on top of individual bowls of rice. The meat was tasty but I think we both enjoyed the more flavorful and savory pork. 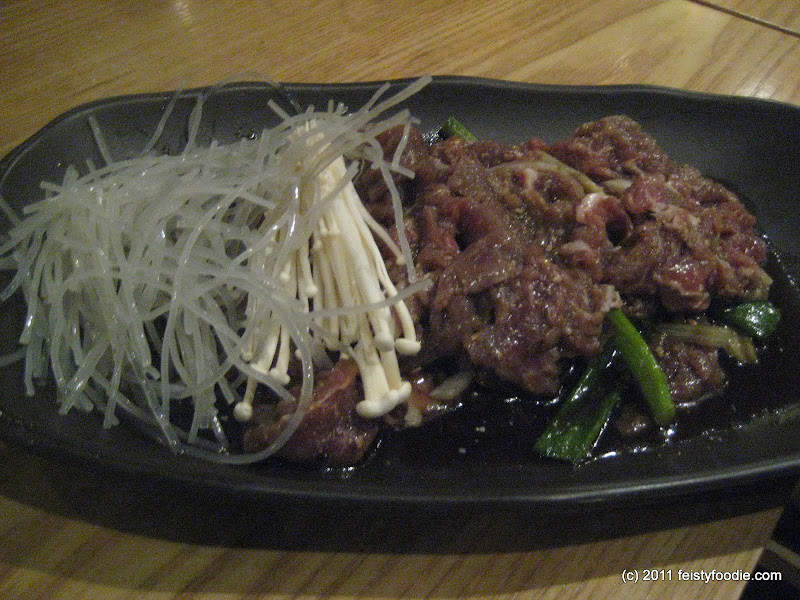 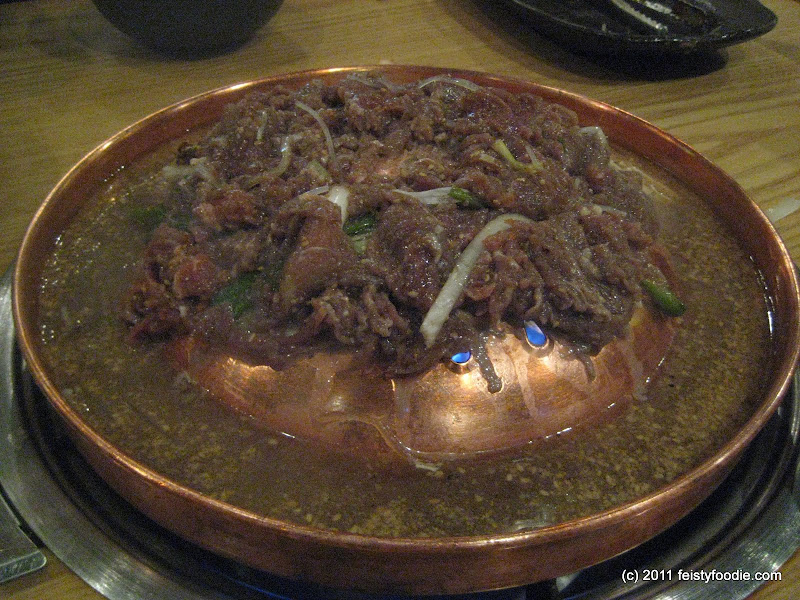 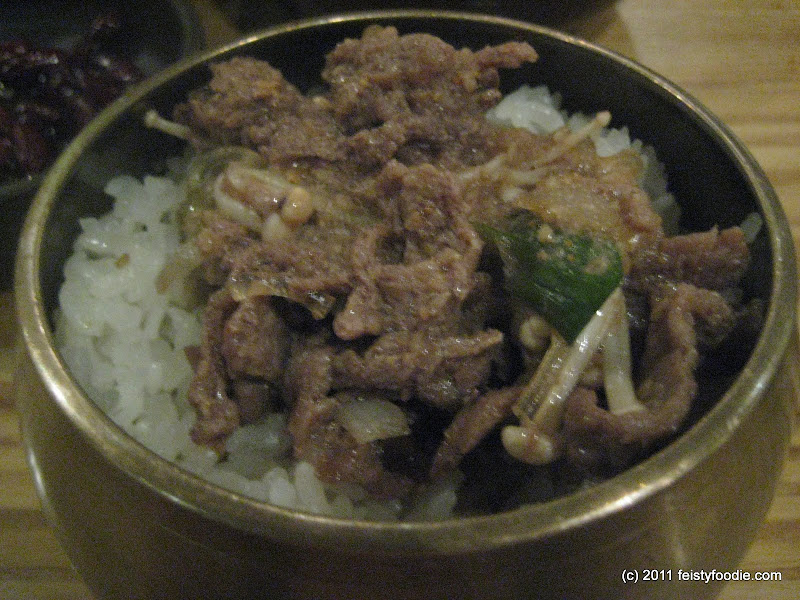 CT says: Though I didn’t think the meat itself was as flavorful as the spicy pork, I really enjoyed the way they served this. The broth filled with veggies and glass noodles was really nice. On a colder day, I would definitely order this again. The rice sopped up the broth nicely too, making it a bowl full of yummy.

All in all, Miss Korea was indeed a good choice for a longer lunch. We were both quite full with all of the food that was given for $26 plus tax & tip. As a warning, you will be a little stinky from the grills, so the cheap lunch has a slight downside if you are returning to the office. I usually just get take-out when I eat Korean for lunch especially from Woorijip, so it was a nice change of pace to sitdown and relax over some yummy grilled meats.