A few weeks ago, Beer Boor and I had plans to have tea at Three Tarts.  Unfortunately, due to some odd circumstances, we found ourselves in the area without tea, so I suggested visiting Donatella, where I’d been last December and really enjoyed, telling him that we had to go as I know he enjoys this style of pizza.  Of course, life happened, and we never found ourselves there… until now!  I was pleased that when I said “I think it’s near here” it turned out to be literally an avenue away.  I’m usually terrible at telling where I am when I’m in an unfamiliar neighborhood. 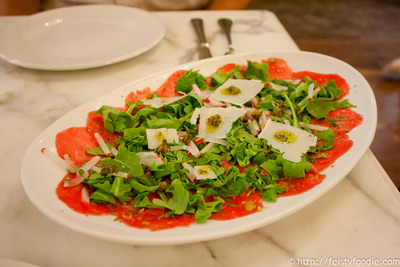 We started off with beef carpaccio – paper-thin slices of beef topped with arugula, shaved parmagiano.  Light, fresh and very tasty, we had no problem finishing this plate.  I think Beer Boor liked it more than I did, calling it melt in your mouth beefy goodness. 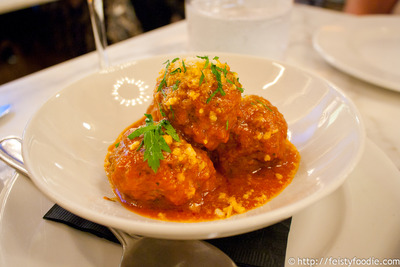 Since I’d really enjoyed these, I suggested we also get a plate of meatballs.  We were given the choice of spicy or not; since I’d had the regular, I chose spicy.  Again, the meatballs were fantastic – soft, succulent, meaty orbs of awesomeness, this time with just the slightest hint of warmth at the end.  My guess is a bit of crushed red pepper flake, but nothing intense that I couldn’t handle.  I liked these – possibly even more than the regular.  Beer Boor had no complaints about them either. 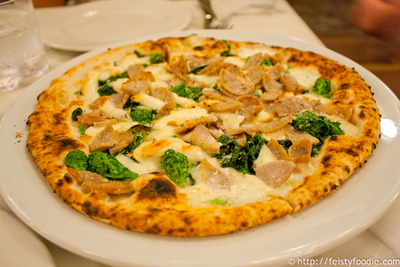 For our pizza, we chose the Enzo – smoked buffalo mozzarella, rapini, and sausage.  While the ingredients were top-notch, and the crust was excellent (see next picture), we both agreed that the toppings were a little too heavy weight-wise for the puffy crust to hold up to, as it kept trying to bend in the wrong direction while we ate it.  Tasty, but not quite the right toppings for this style of pizza. 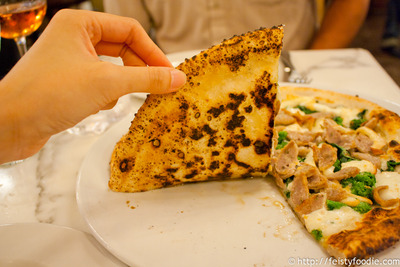 Obligatory upskirt.  Yes, they know how to do pizza here, perfect char, and the crust was puffy, soft, the way it should be… just that our choice of toppings wasn’t quite right for this style.  I won’t hold it against them – I just won’t order this particular pizza again. 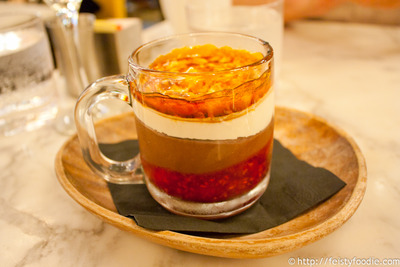 Though I was surprisingly full by this time, knowing Andrea Jarosh is a pastry chef genius, I had to order dessert.  Not just any dessert though – Valrhona chocolate mousse! 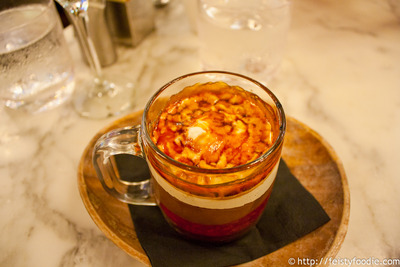 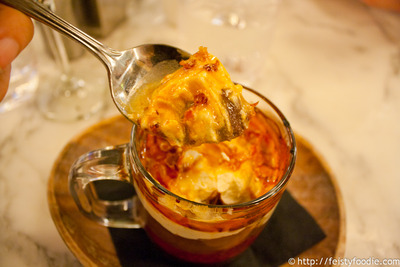 Breaking through to reveal an awesome, ever so slightly sweet fluffy mousse.  Love.  I don’t think she makes anything that is terrible.  Of course, as I dug deeper, Beer Boor informed me that was raspberry on the bottom, and damn him for being right and knowing all my allergies.  I relinquished the rest to him – maybe that was his evil plan all along…

Yvo says: A lovely meal with fantastic company – though I honestly think this is the least amount of food we’ve ever ordered together! I’m forever waddling out of places when I eat with him, clutching leftovers – I would not be unhappy if Donatella opened another location closer to me or in an area I frequented.  The pizza is solidly good, the meatballs are excellent, and I’ve not had anything there that I haven’t liked.  (The eggplant parm is also delicious at Donatella.)  I will definitely be back… hopefully not waiting 8 months or until something happens elsewhere to return!
highly recommended